A Window of Opportunity in Vancouver

Springtime is the busiest time of year for me, photographically speaking, what with dance recitals and the attendant portraiture, graduations, and other end-of-school-year events.  So it was a rare thing to have five days of "free" time, having completed all previous commitments.  And with five days of free time comes the intense desire to get outta town.  Travelocity presented Vancouver as a relatively inexpensive option, given the last-minute nature of this booking, so I jumped at it.  I'm no stranger to Vancouver, having twice traveled up there to shoot ballet and contemporary dancers with Canada's best dance shooter David Cooper, plus a couple of other visits for work-related or other purposes.  With only one full day of shooting, and a forecast of one day of good weather, I was off.

On arrival, I checked into my hotel, then took off to Granville Island, a half-hour walk over False Creek.  It's a touristy place, but a nice way to spend a couple of hours, especially with the threat of rain.  I spent some time listening to Jim Meyer, who plays a twelve-string Chapman Stick, an electronic instrument that looks like a wide-neck guitar without a body.  I've never seen a street performer who was camera shy, but Jim was, so I got only a couple of snaps with his permission.  The most interesting aspect was his gloved hands, playing in the cool afternoon.  A duo-toned black and white rendering revealed the textures best. 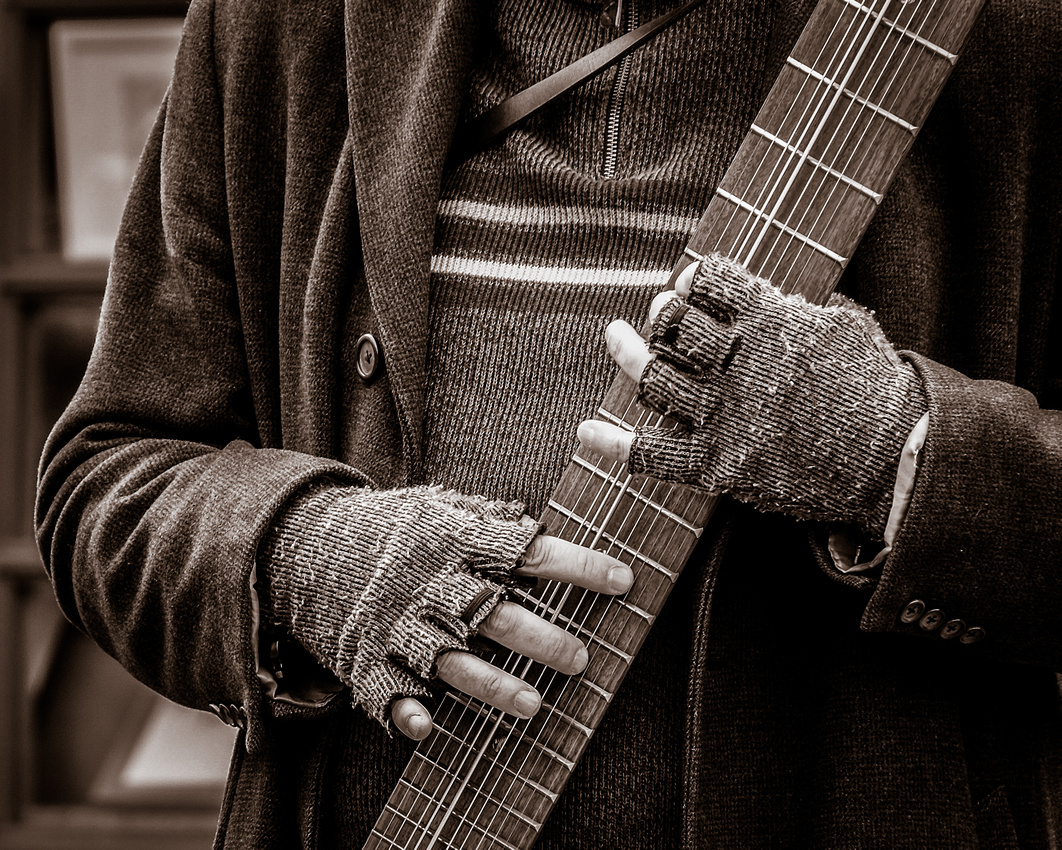 On the way back over the Granville Bridge, as the light was falling, I took a look back to the east, and saw Mount Baker, bathed in light, looming in the distance in the State of Washington.  I had never seen Mt. Baker from Vancouver, and it transfixed me.  I stood on that bridge, stopping everyone who came by, pointing out this marvelous scene.  For the locals, this was apparently no big deal.  So I snapped away, changing my exposures to try to capture the full tonal range and color temperature of this scene.  But the dynamic range between the darkness of the fore-and-middle ground and the mountaintop 70 miles away pretty much kicked my butt, and without a tripod, a high dynamic range approach wasn't really feasible.  Instead, I got this. 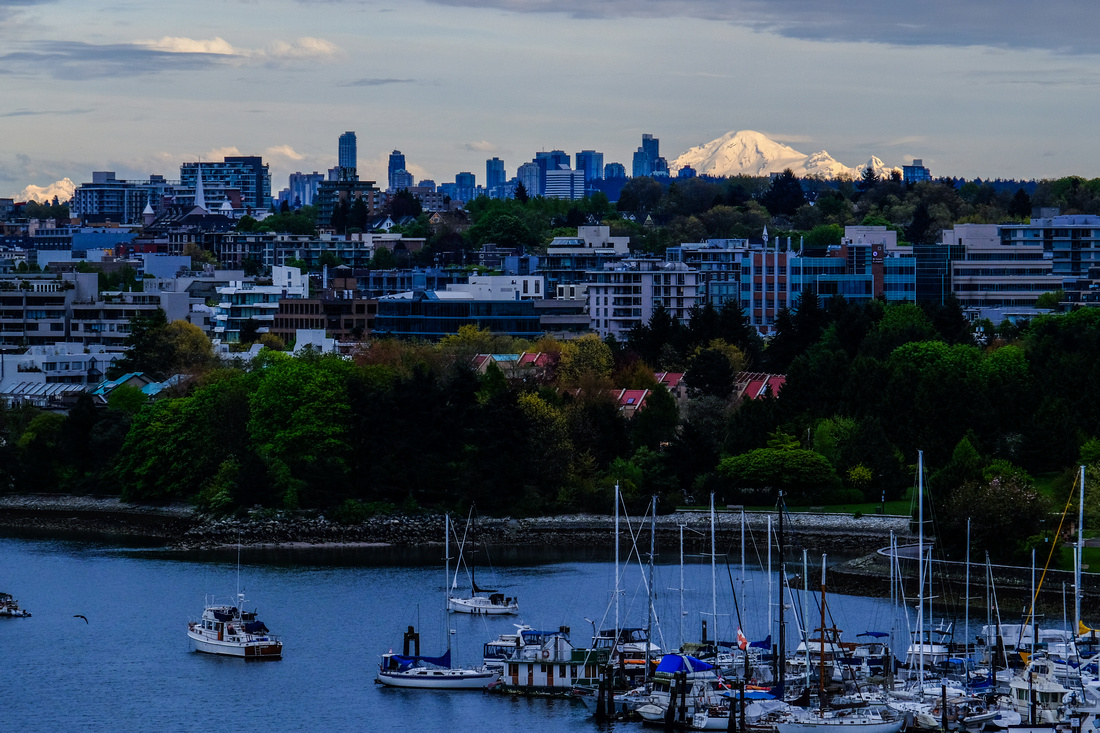 As David Hobby says, when you're working in the blue hour, you might as well take your photograph in that direction.  This wasn't specifically during the "blue hour", as the sky reveals.  But the foreground and middle ground were decidedly blue in hue, the sun having already receded below the horizon. Here, I took it further toward the blue, which had the added benefit of taking some of the high-elevation late afternoon yellow out of the snow-clad mountain.

The next morning dawned dark and dreary, which lasted til the noon hour.  I was frustrated that my day was going to wind up gloomy and wet, but I went out for a walk, without cameras, and found myself watching the grand announcement of the members of the Canadian women's World Cup soccer team, the finals of which will be played in Canada.  It was a big deal, and the locals were stoked, and getting soaked.  I trudged back, hoping for clearing skies.

So I packed up my gear, which, by the way consisted of my Fuji X100S, my XT1, and two lenses, the 18-135WR and 10-24 f/4, my travel kit I intend to use in Europe while photographing subjects other than performers.  This would be a test of the utility of this minimal kit.  I boarded a local bus to the end of Davie Street, and ended up in glorious sunlight on the outskirts of Stanley Park.  Hallelujah!  I decided to walk the entire Seawall, a nine kilometer hike, and capture the various directions of this loop, along with the changing light that the afternoon and evening would present. 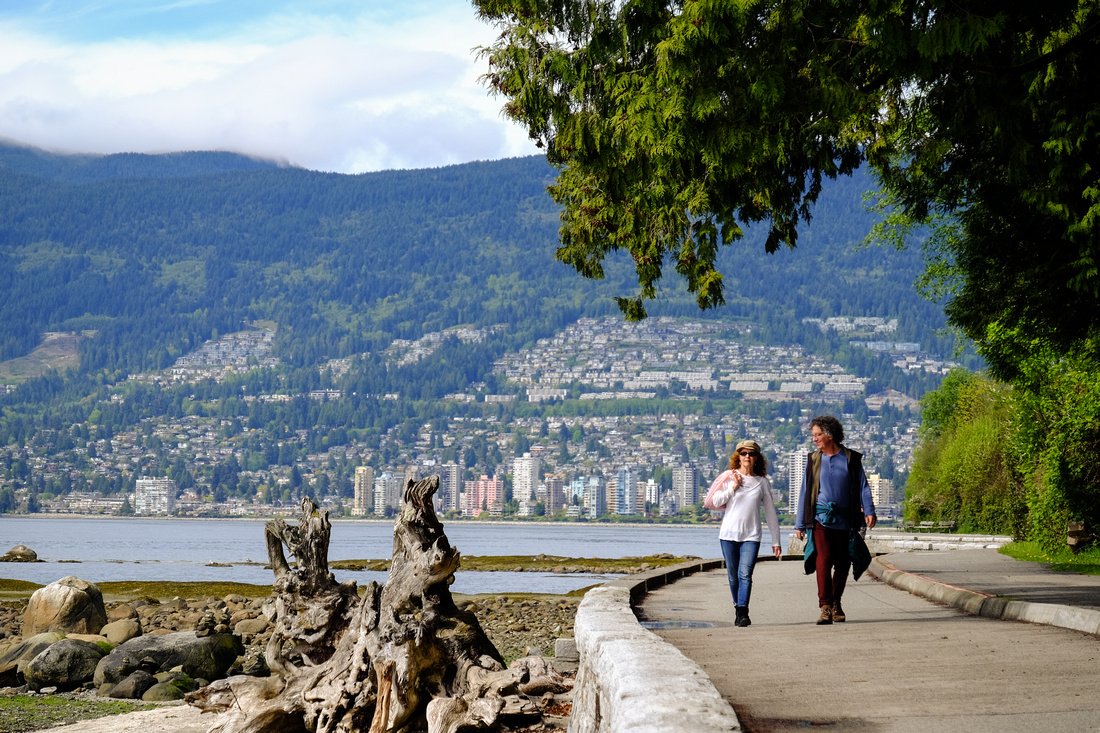 One of my goals in this exercise was to ensure that there were people in my photos.  Too often, travel photos are sterile, devoid of the people who actually live there.  Ask yourself, how many times have you wanted to take a photograph of a place and waited until the people left the scene?  After all, they're nobody you know.  But they provide a sense of scale and a reason to be there.  So the trick is to find the right moment to make the photo.  Are the people engaged with each other or focused on their destination?  Is their stride attractive?  It's very easy to include awkward moments in shots like this, so shooting a small burst can really help get you a nice composition and have the people look good, too.  Put the people in a nodal point and they become an important element of the photo.  Though I did not direct anyone, there is nothing random about the placement of elements of this photo.  Instead, I placed myself where the elements would come together.  All I did was wait for the right moment.

The Seawall trail around Stanley Park is an almost 360-degree loop. Beginning at around 2:00 p.m., I was ensured of getting a variety of light conditions and compositional elements.  Here are a few of my favorites, with some additional commentary.

I knew that Lions Gate Bridge connecting Vancouver to points north would provide a dramatic element from a variety of locations.  It soars over the entrance to English Bay due to the high promontory of Stanley Park as well as the need to provide clearance to ships. Putting people in the frame also adds to the sense of scale. 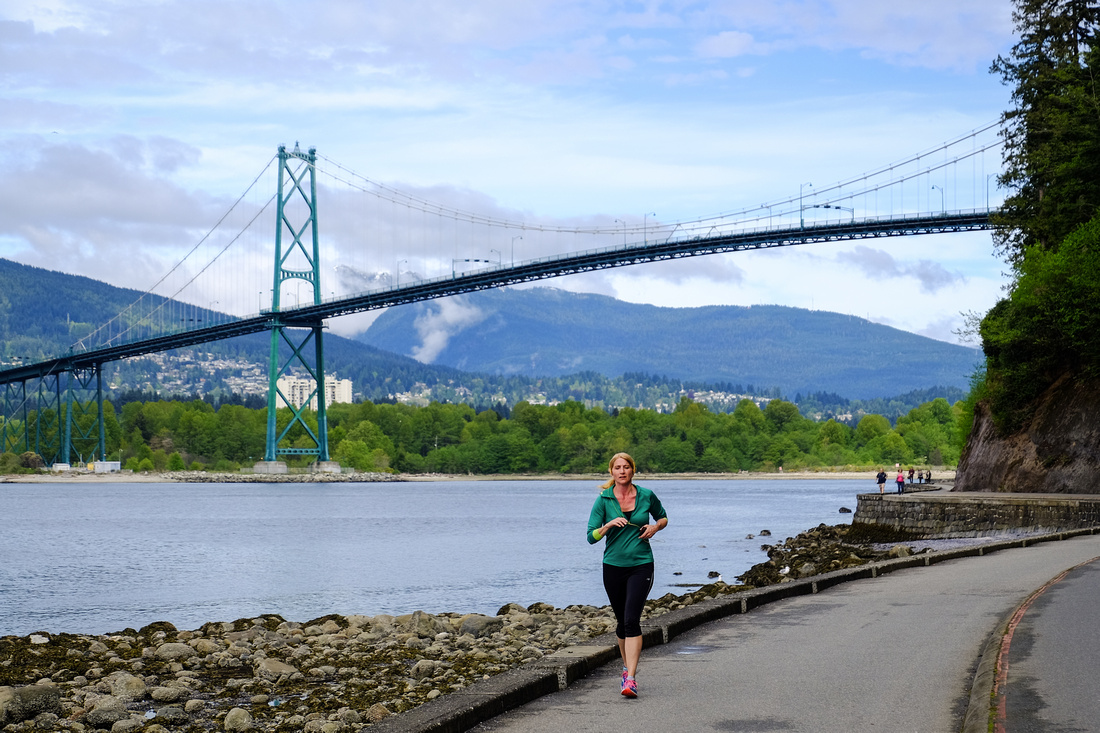 I waited under the bridge in hopes of capturing one of the many seaplanes that come in and out of Coal Harbor nearby.  My choice of lens, in this case 10 mm, enabled me to intentionally distort the geometry of the bridge and bring in some trees.  It also renders the passing seaplane overhead very, very small in the frame.  Although the plane occupies maybe .5% of the image, my eye immediately goes to it.  A great photo?  Probably not.  But I like it nonetheless. 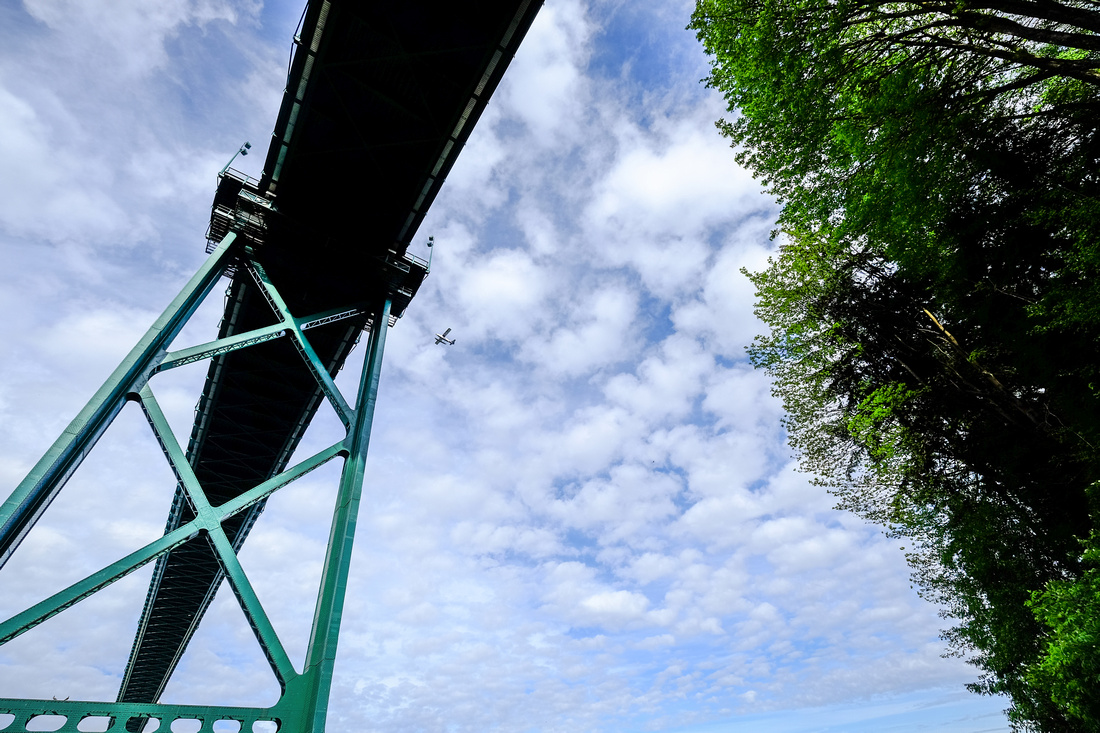 Stark geometry and bold colors are accentuated in directional, mid-afternoon daylight, as these examples show. 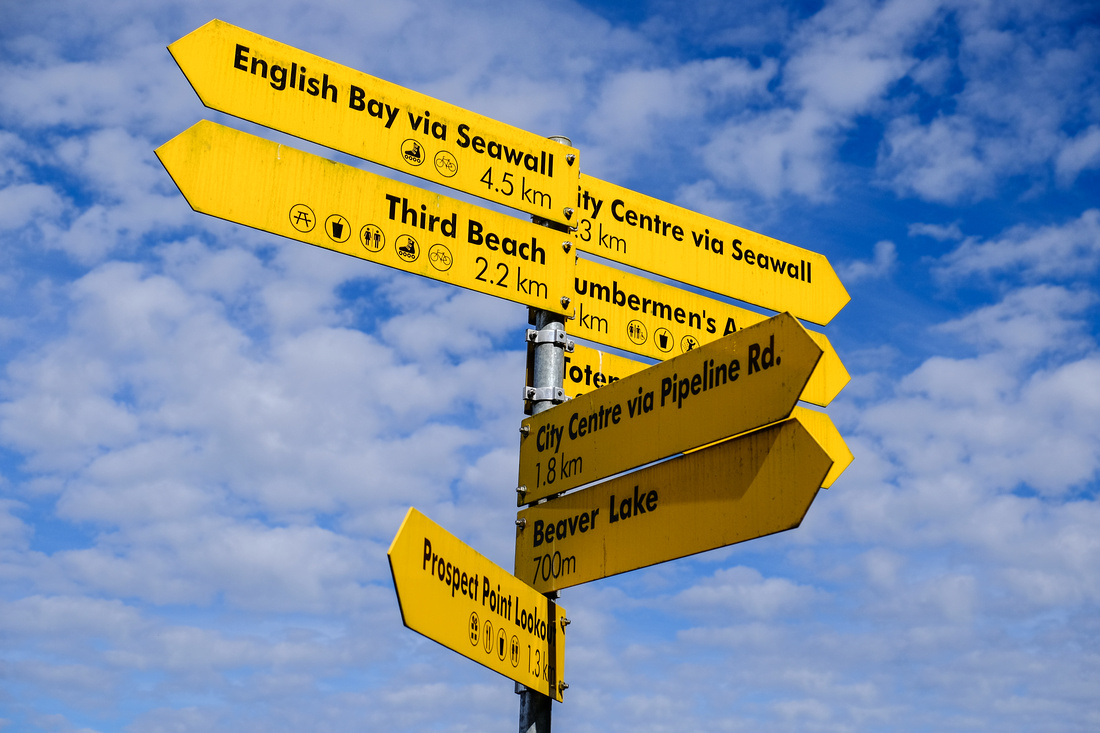 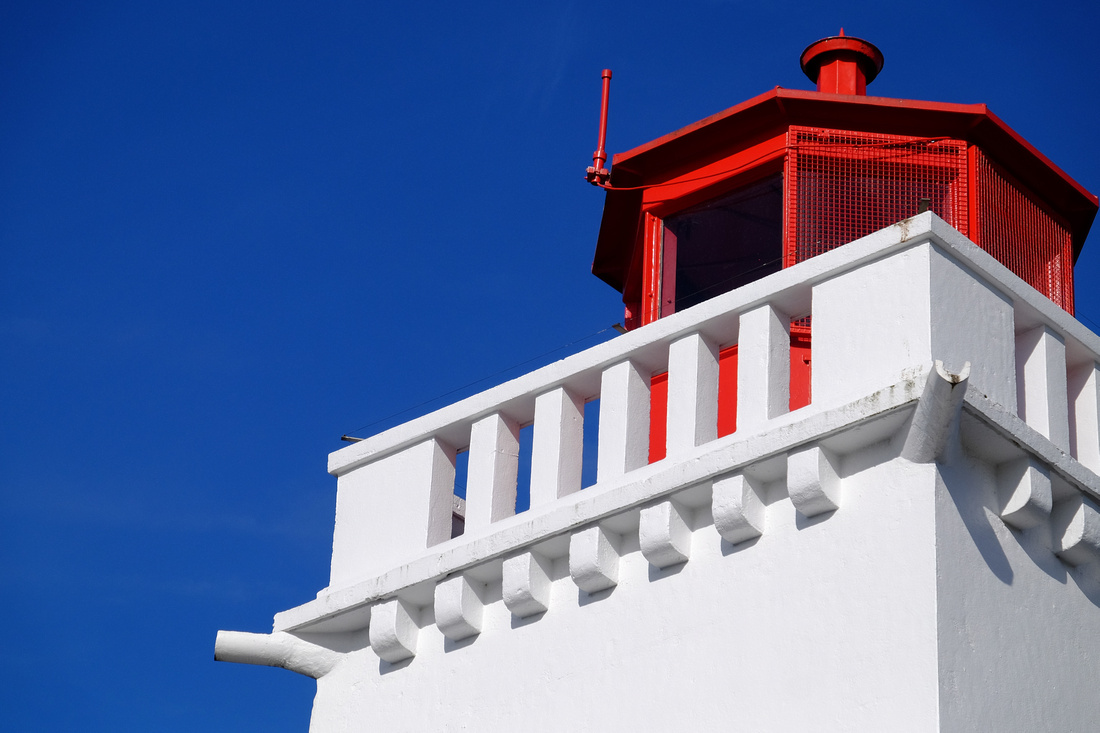 One of the strangest sights on this walk is a small statue erected about ten yards off-shore entitled "Girl in a Wetsuit".  It was meant to commemorate scuba diving, which was big back in the day in Vancouver (for whatever reason), but for me, it's just a humorous perch for seagulls, and the resting place for a girl who can't do anything about it: 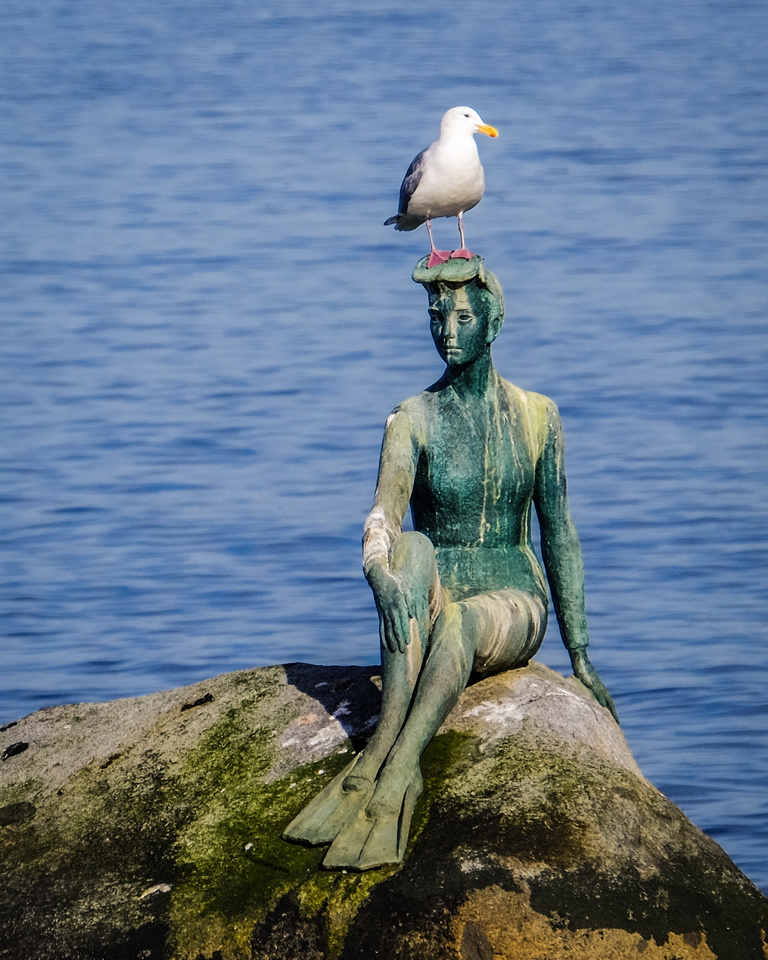 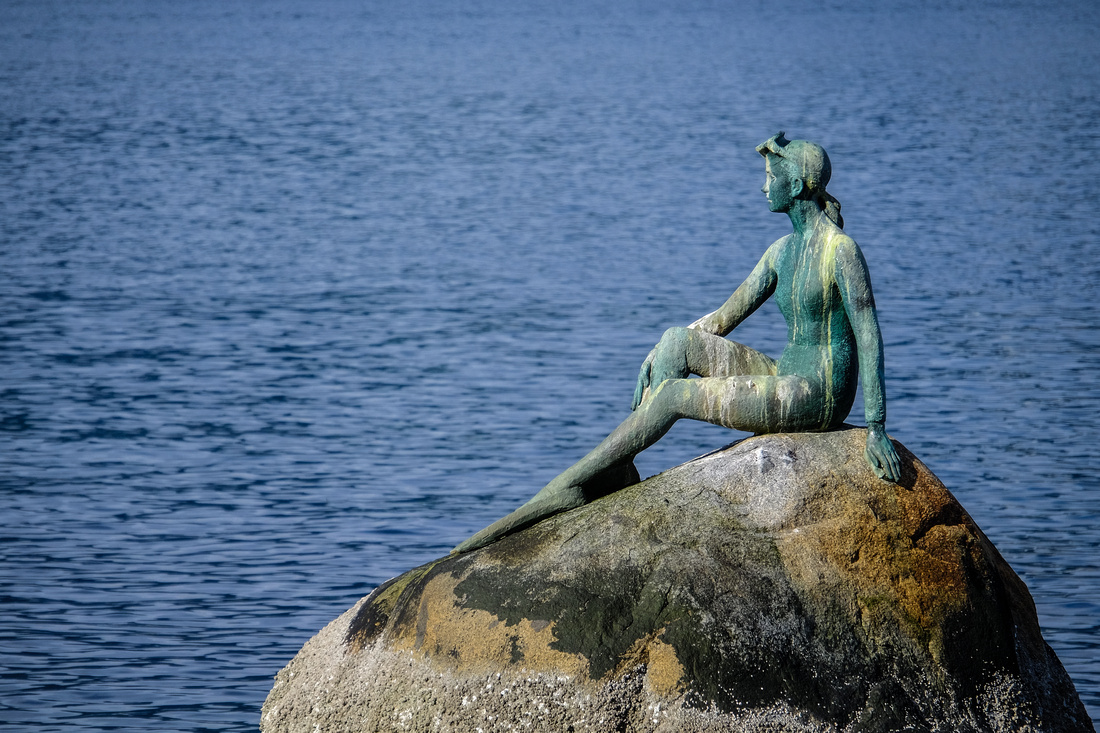 Just around the bend, the sweeping vista of the Vancouver skyline comes into view, and your choice of lens determines what elements you want to emphasize, whether it's the skyscrapers of downtown, or the bright orange cranes of the harbor, with Mt. Baker looming in the distance. 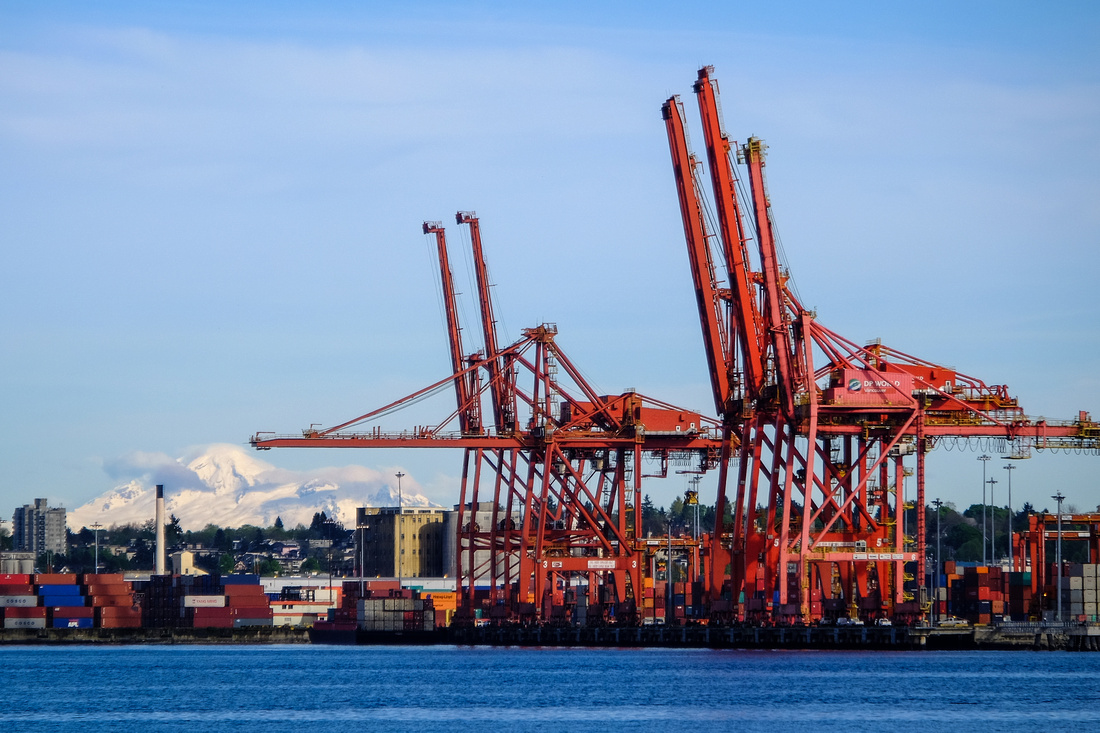 Panning to the west at this time of day reveals the beginning of the "golden hour" as the light gets warmer and subjects are more directionally-lit. 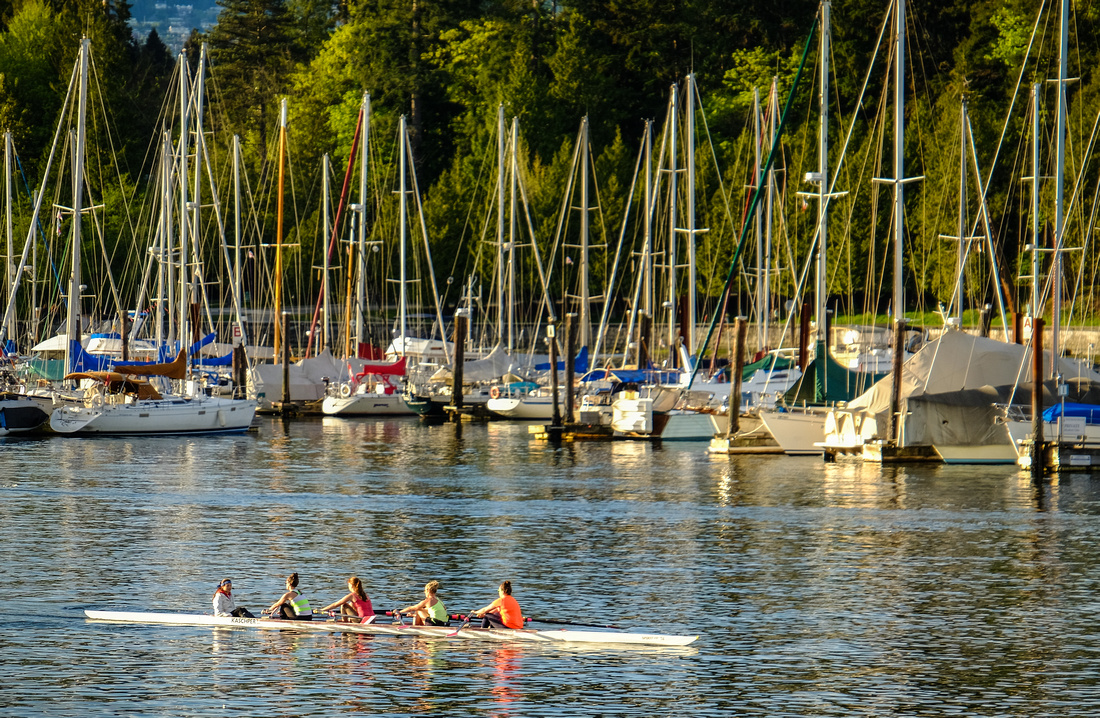 I stopped for dinner right after this, knowing that I'd finish right about the time when the "golden hour" transitions to the "blue hour", that time of day David Hobby calls "mix light".  It's perhaps the best, most dramatic time of day for scenic photography.  In Vancouver, it's a target-rich environment, a time when the light enhances all of the elements of a good photograph, making great photographs out of what might otherwise be snapshots. 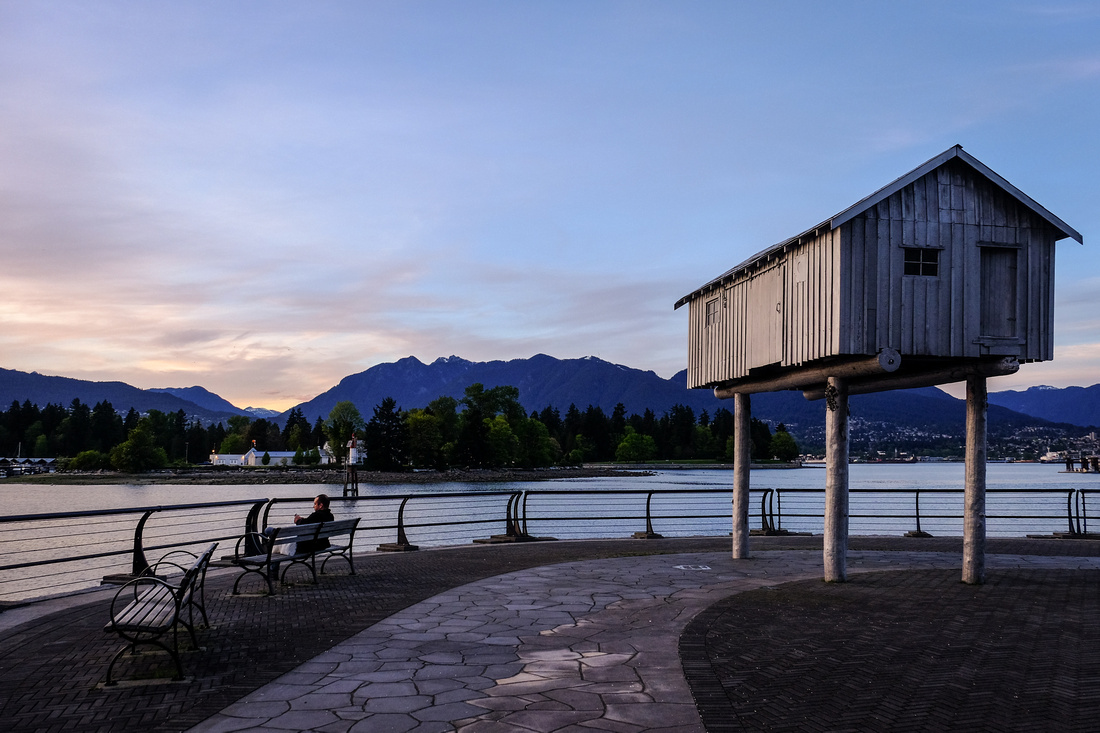 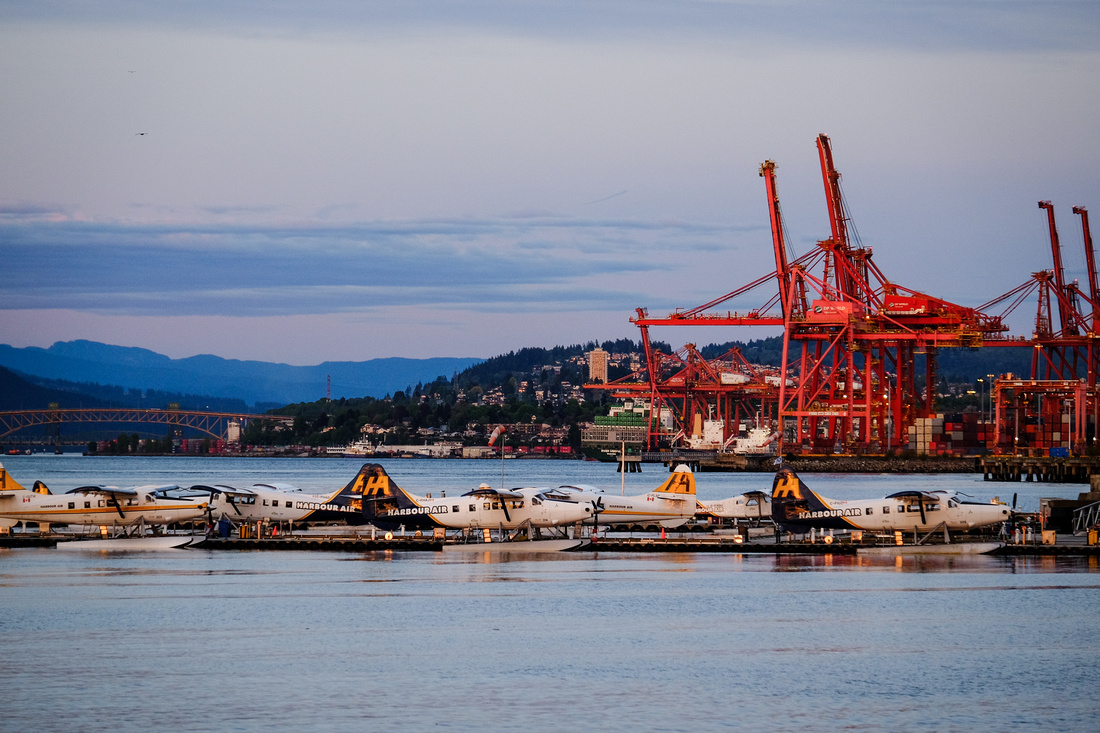 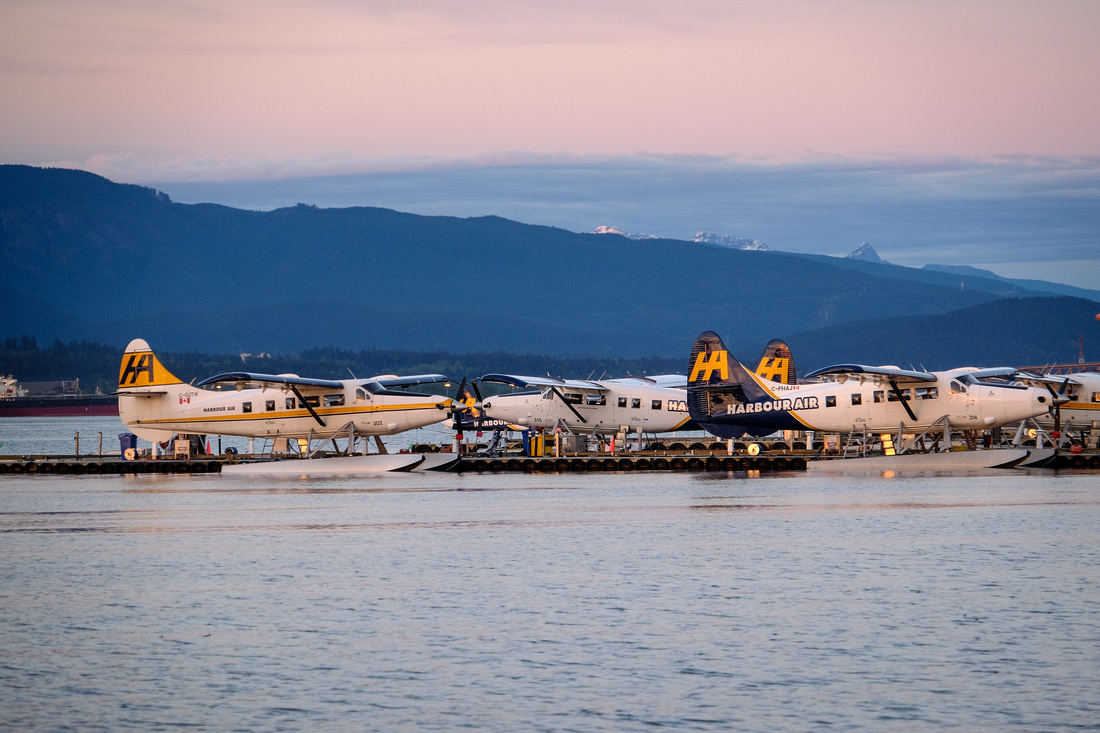 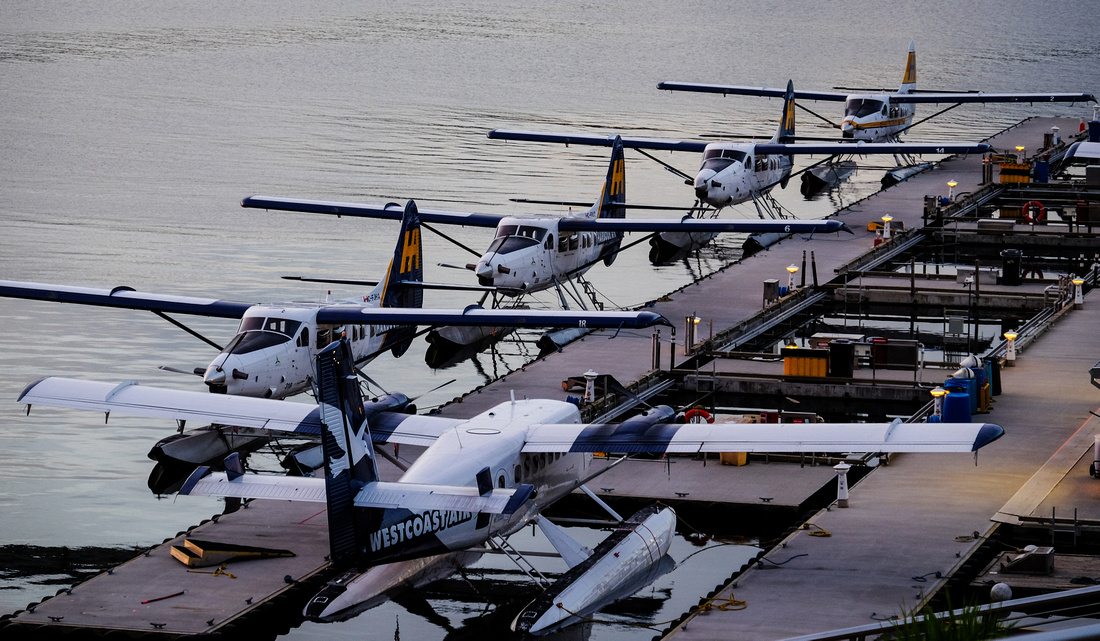 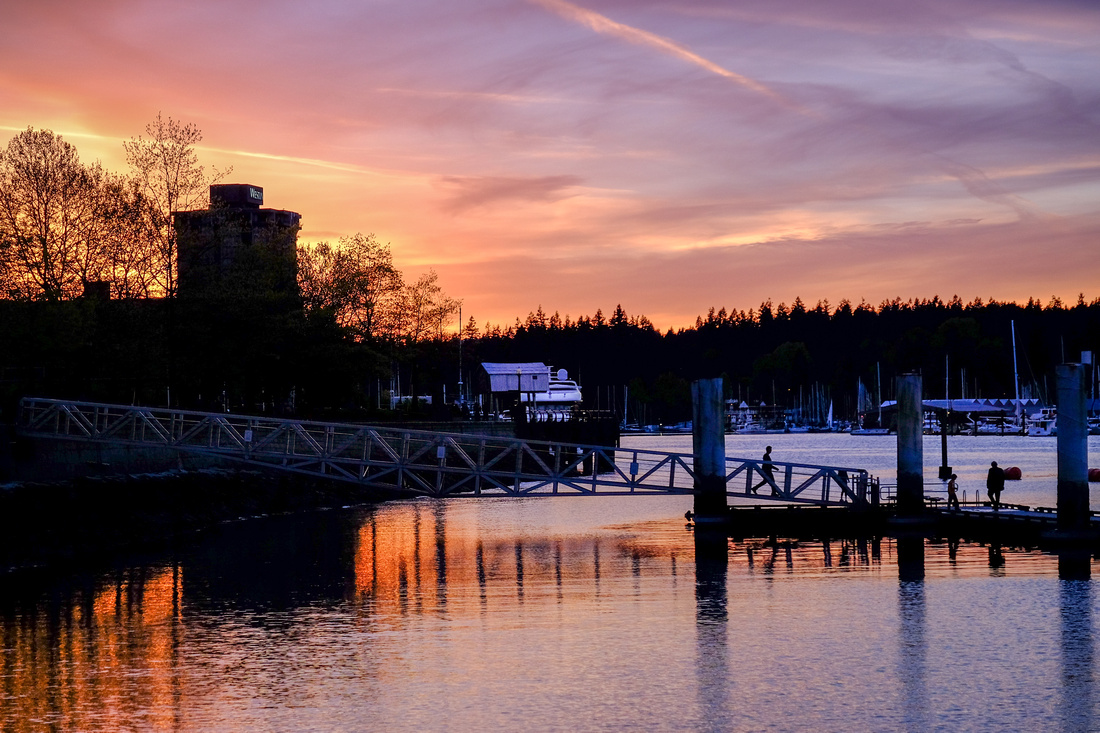 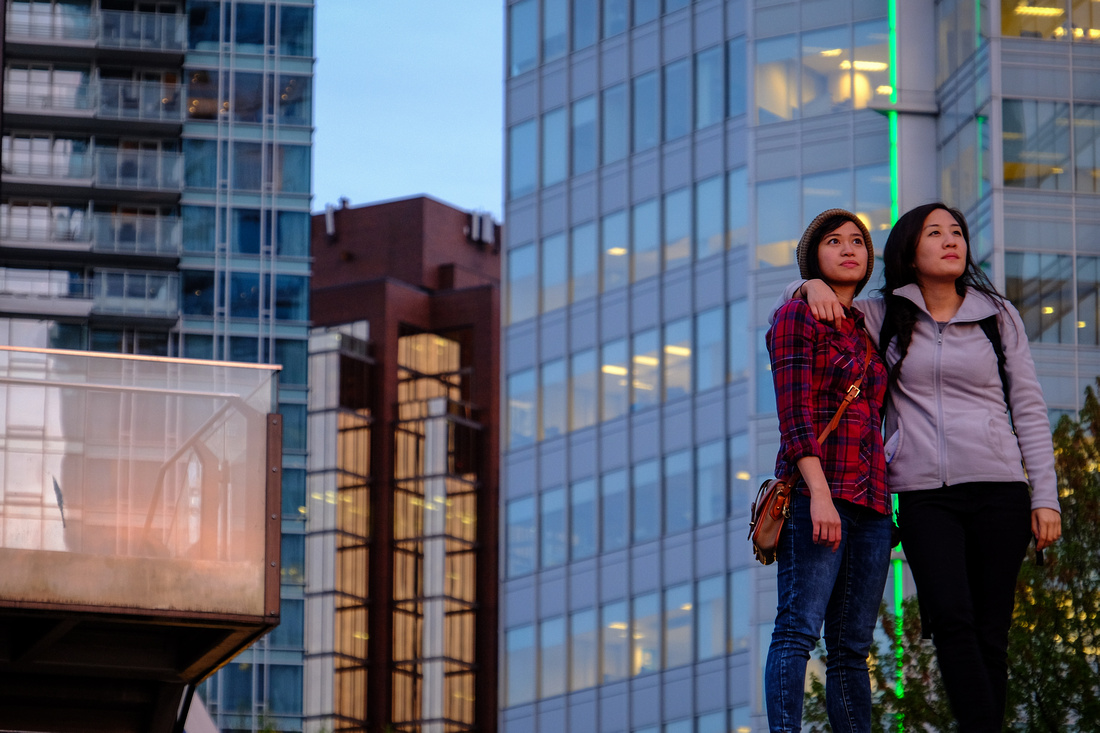 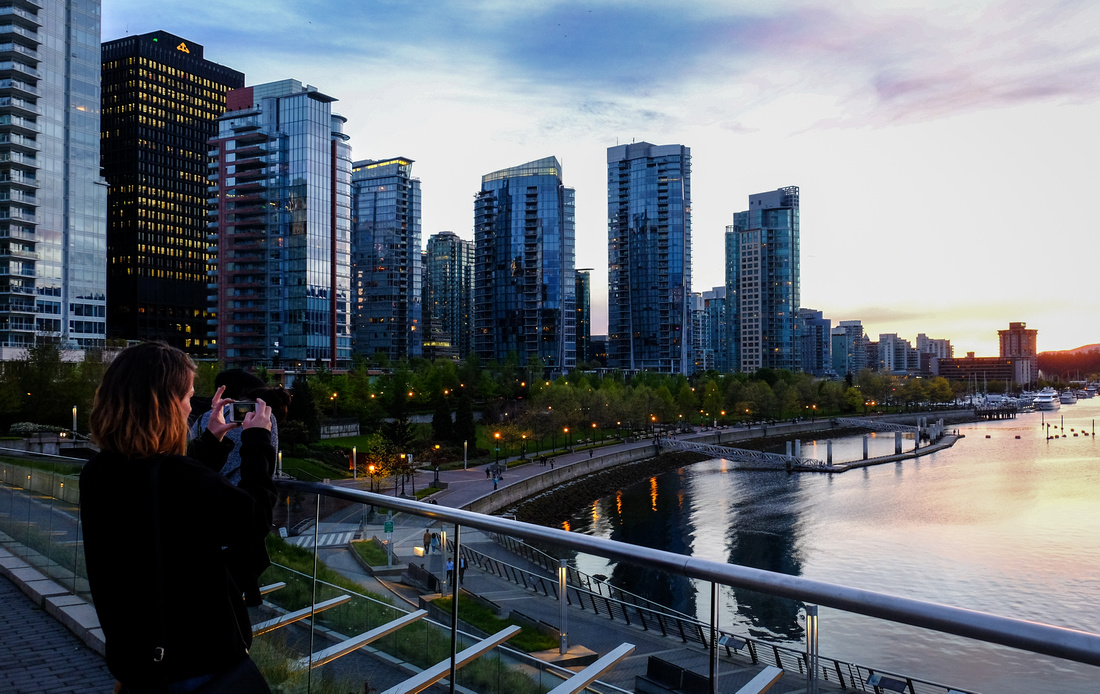 And finally, blue hour.  By now, most people have packed it in.  Too bad, because this can result in some of the most dramatic shots of the day.  I didn't have an opportunity to get to a vantage point to capture the entire Vancouver skyline at this time of day, but these scenes can be just as impactful. 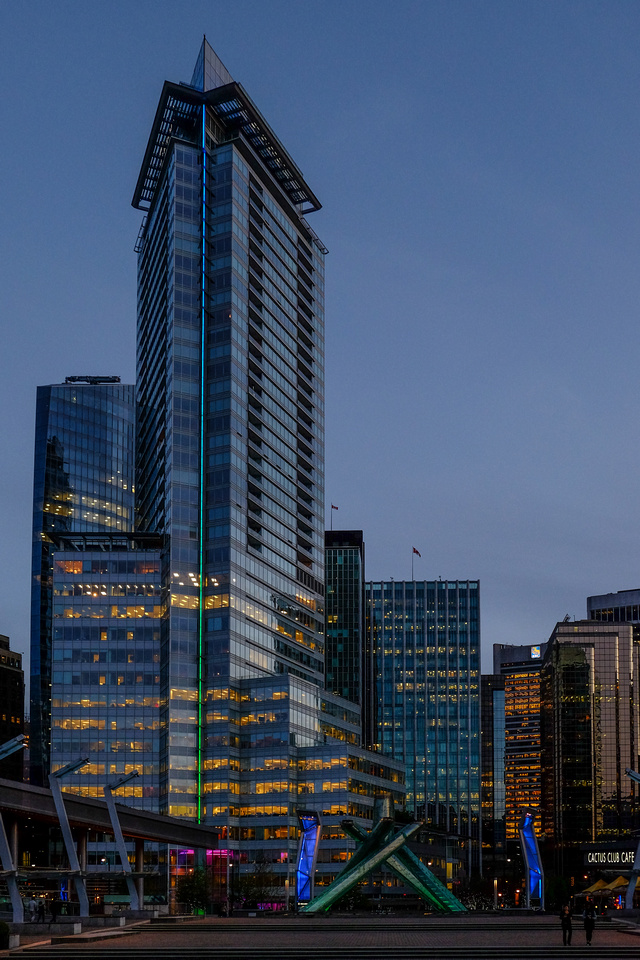 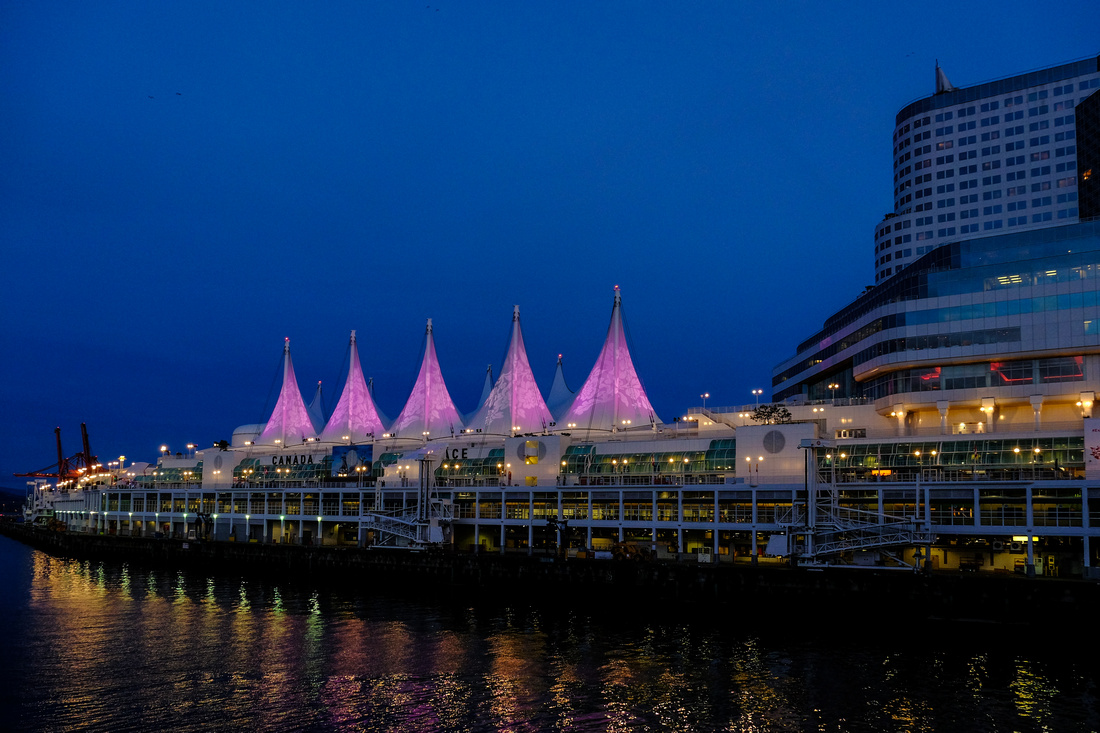 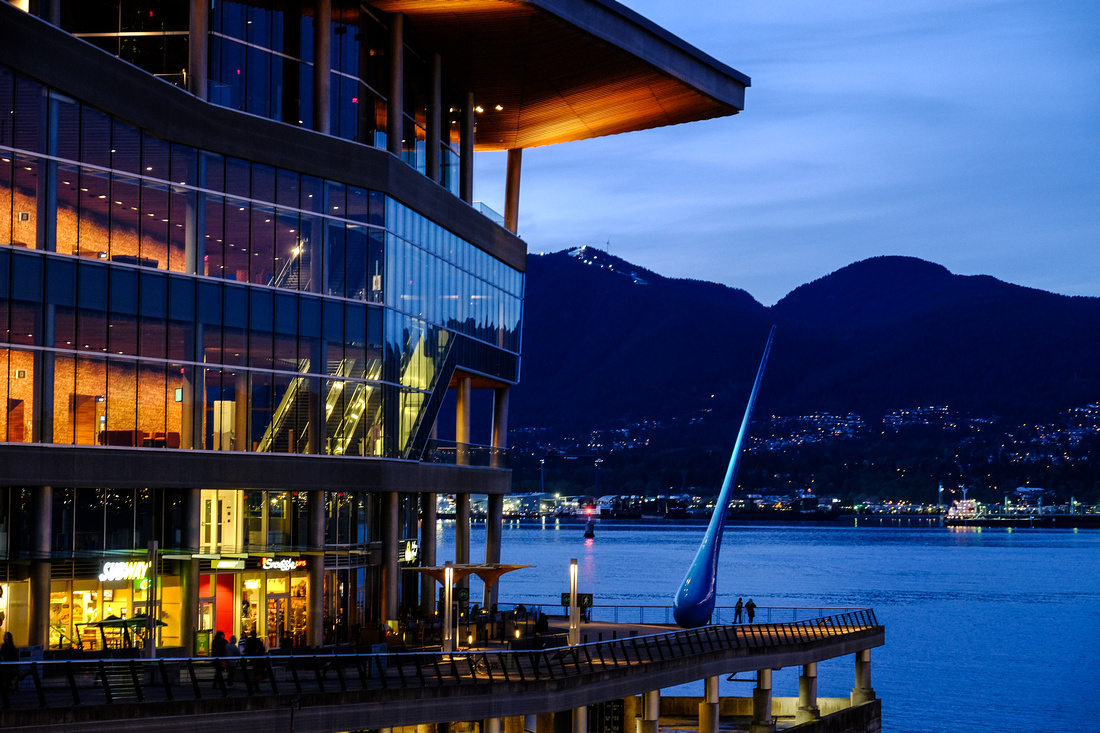 At this point, I did pack it in, and walked the rest of the way to my hotel.  Altogether, I walked about 17 miles that day around Vancouver, and had a very rewarding time.

A couple of final notes.  If you're a person who enjoys traveling with your camera, you owe it to yourself to check out David Hobby's fantastic series "The Traveling Photographer" on Lynda.com.  He offers invaluable tips on when and where to shoot, how to look for and make the most out of your many opportunities.  While the series is focused on specific cities around the world, the principles and lessons are applicable anywhere.

Lastly, some commentary on the equipment I used in Vancouver. Although I brought my Fuji X100S, all of these images were made with the XT1, and most were made with the 18-135WR lens.  All of these are almost straight-from-the-camera jpgs, with minimal tweaks in Lightroom - mostly straightening and cropping.  With a few months of experience with the Fuji system, I'm becoming increasingly fond of the rendition the Fuji's give me.  They handle available light extremely well, no matter what the available light is; outdoor conditions, indoor conditions, stage light, you name it.  I tried various white balance settings during this afternoon walk, including auto, daylight, and cloudy.  In most cases, auto worked just fine, if not best.  Other than the black and white/duo-tone conversion of the street musician, the only photo I adjusted color temperature in post was the photo of False Creek and Mt. Baker at the top, moving it more to the blue to neutralize the late afternoon yellow snow on Mt. Baker (nobody likes yellow snow, right?)

The only frustrating limitation of the Fuji XT1 is the apparent shutter lag, or perhaps it's the link between the electronic view finder and the shutter.  Though it almost always nails focus, sometimes that shutter lag results in missed opportunities.  It's common understanding that the Fuji system isn't for sports shooters who need the absolute critical, split-second timing to capture the peak action.  It also isn't for dance shooters like me, who need the same split-second timing.  But I've come to the conclusion that just about any subject that requires that split-second timing will not be shot with the Fuji system.  Getting the timing down for capturing a specific point in a pedestrian's stride was an exercise in predicting the shutter lag.  I'm shooting a runway fashion show this weekend; the Canon gear will be coming out for that for the same reason.

Nevertheless, I invested in the Fuji system to minimize the size and weight of my gear for traveling and other assignments where the Fuji system excels.  I do not regret that decision at all.  I'm eagerly looking forward to documenting a choir performance tour in Ireland in a few weeks.  I know that this kit, augmented with the 40-150 f/2.8 and 35 f/1.4 lenses, will give me great results, and my back and shoulders will enjoy the trip as much as my eyes and ears will.