Solving Problems by Not Creating Them 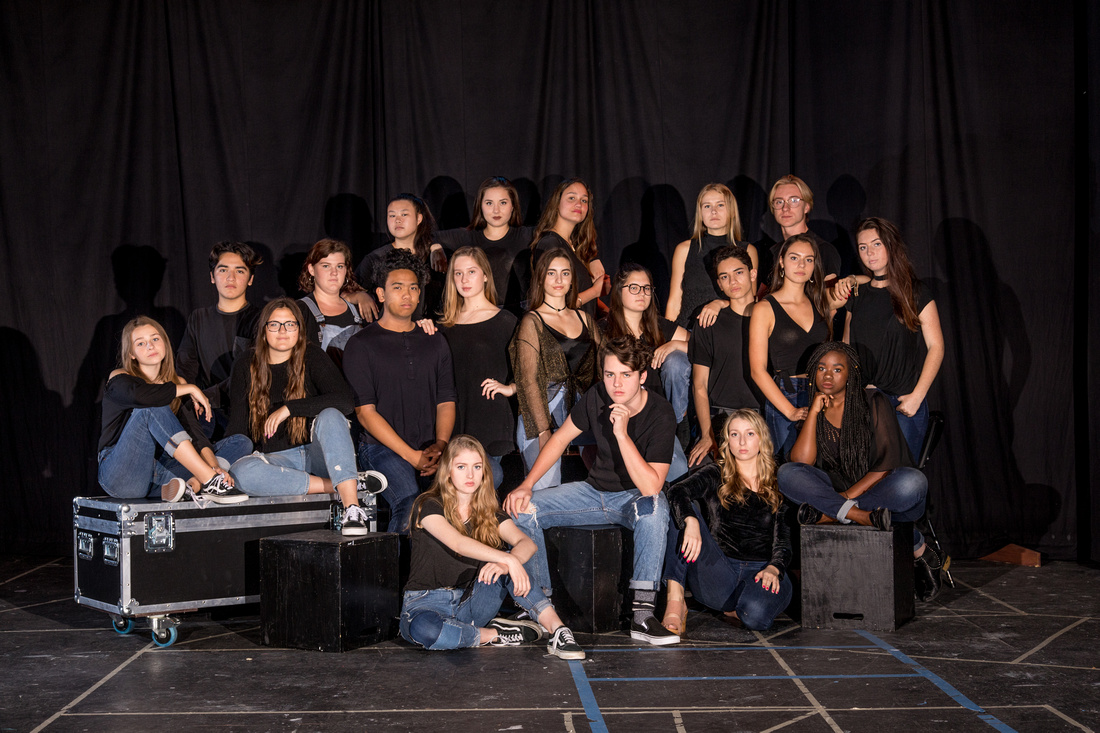 Location photography is often a process of solving problems, mostly those dealing with light.  Whether it's harsh sunlight outdoors, or providing interesting light indoors, the problem solving process is amped up significantly when you're dealing with a group.  In this case, it's the 2017-18 Actors' Repertory class at San Juan Hills High School.  One of the most fun things I get to do each year is to photograph this group, and the class photos are framed and hang on the wall in the school's Black Box Theater.  Working with Cambria Beilstein, the performing arts department chair and director of the theater program, we try to create a different look for the group by changing up the location.

Up to now, Ms. Beilstein and I have come up with a concept, and I have determined how to light the group and the environment in which the photo is made.  For the past three years, we decided to work in the school's theater; first placing the class in the audience and shooting from the stage, then putting the next year's class in the wings and lighting the fly ropes behind them, and last year placing them downstage facing upstage and augmenting the auditorium with speed lights (inspired by a similar shot by Joe McNally).

Problem one:  my impression of Olivia's design was not Olivia's.  I expected her lighting approach would be to wash (or spot) the back wall with colored lights. I would then supplement her lights with rims and frontal light if necessary.  Or at least that was MY thought.  When I showed up, though, it was apparent that Olivia's design was to light the group with ceiling mounted lights that were gelled, and not washing down on the background.  Frontal light could be provided by a fresnel light aimed toward the group.

Yuck...  The light is flat, and all of the color provided by either Olivia's theater lights or my own gelled rim lights is gone.  Moreover, the curtains behind the group reveal shadows created by my little speed lights.  In short, this pretty much sucks. The details: ISO 200, f/5.6, 1/125 second.  Slight variations in power settings or aperture made little difference in the degree of suckage.

Solution: kill the speed lights, and take a closer look at what Olivia had given me.  Maybe add a little frontal light by the fresnel.  But only as much as needed to provide illumination to the actors, without overpowering Olivia's top lighting.  Jack up the ISO, and reduce the shutter speed to taste (as this is now no longer a flash-lit photograph, but an ambient-lit one), and here's the result: 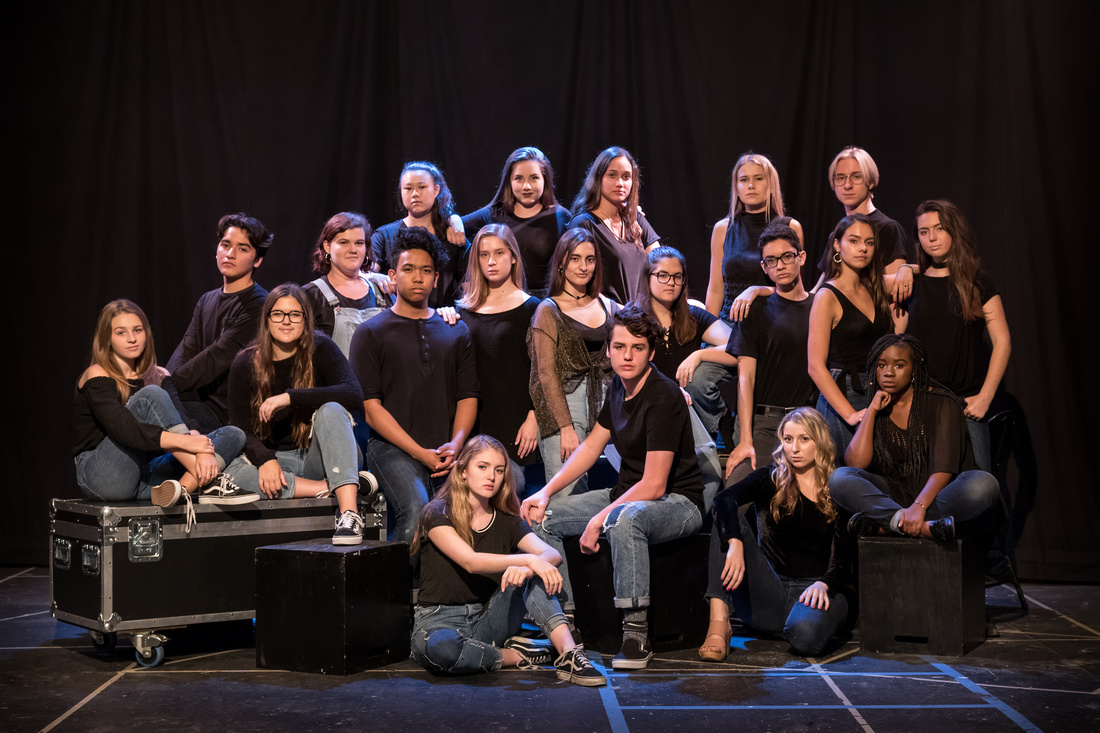 Much better.  The lighting is theatrical, as it should be.  There are three different zones of light, each augmented with different gels, blue in the center, a sort of mauve on either side.  The exposure is ISO 3200, f/5.6 at 1/10 second.  Straight out of the camera.

After a few frames like this one, I decided to move up to the control booth, about twelve feet up above the floor, shoot down on the group, and take advantage of the industrial, organic look of the black box theater floor.  The settings: ISO 3200, f/6.3, 1/15 second.  Here's the result: 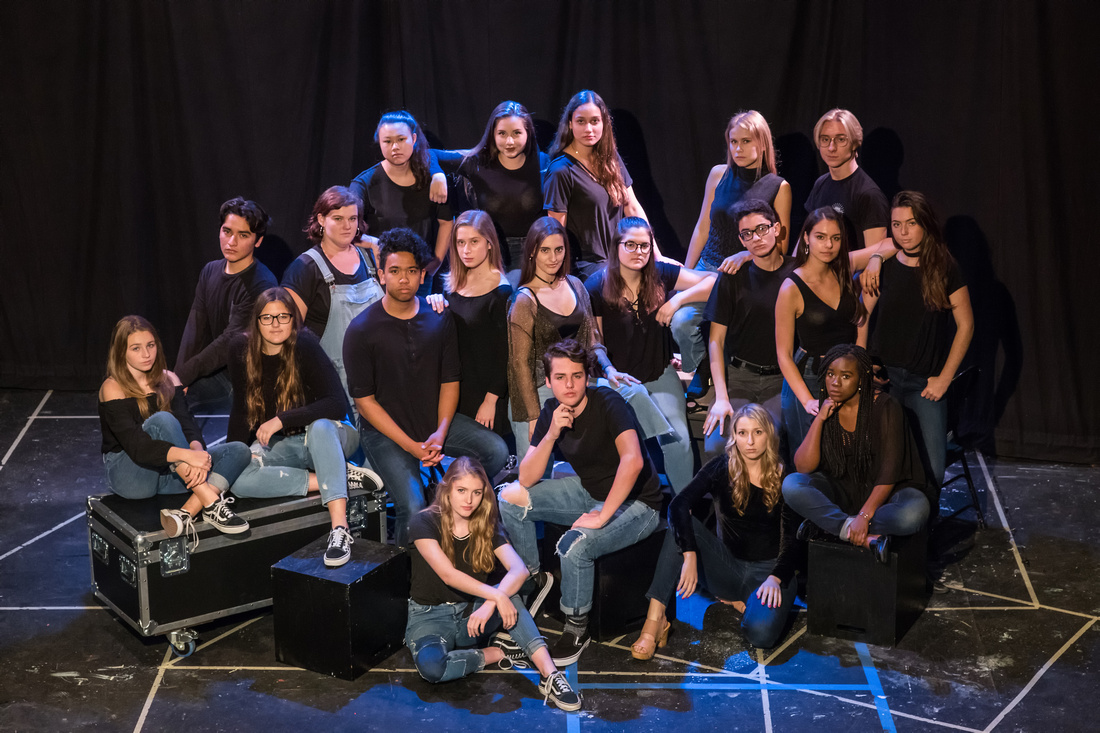 Two lessons are evident from today's shoot.  First, take advantage of what the ambient (in this case, the designer's approach) gives you.  In the theater world, it's probably better than anything you can come up with on your own.  Second, when confronted with untenable circumstances (in this case of the photographer's own making), diagnose the problem(s), and work systematically to resolve them, usually one light at a time.  Today, had I paid more attention to the first lesson, the second wouldn't have been necessary.

Still, it's always a great day when I get to work with this creative bunch.