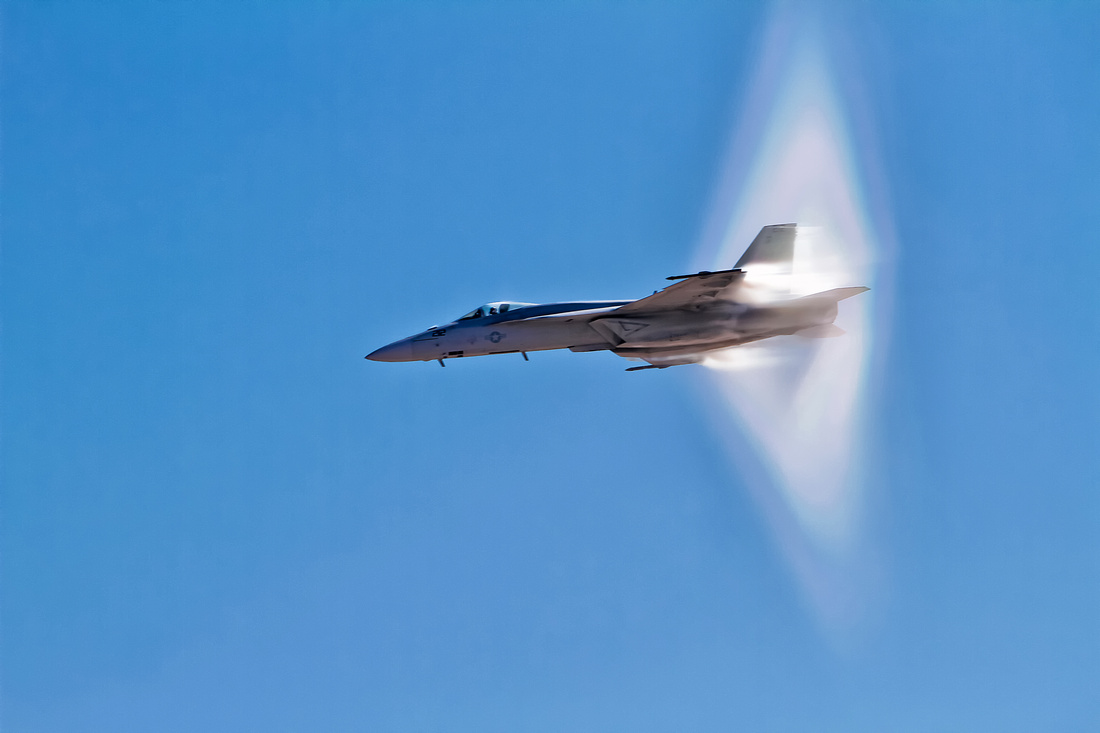 Back in 2011, I posted some cool images of Navy F/A-18s generating vapor cones during the annual air show at MCAS Miramar.  Those photo were made with my Canon 5D Mark III and a 70-200mm lens.  This was the longest lens I own, and even at that length, there was quite a bit of post-processing needed to clean up these photos and render them faithfully to what I saw that day.

After the fiasco of budgetary "sequestration" that sidelined the Blue Angels from air show appearances for a year, I was happy to go back to Miramar this weekend to take in the show.  And having added my Fuji system to my photographic inventory, I decided to bring the X-T1 and a couple of lenses, and focus on a different aspect of the show.  As I've said before, the X system isn't the best for action, so that wouldn't be my goal.  However, after completing the task I gave myself, I did turn the X-T1 and the oft-neglected 18-135WR lens on the Blue Angels to see if I could get anything worth keeping.  I was pleasantly surprised that I could, in fact, maintain focus on fast moving jets, once focus was acquired (that's the tough part).  But none of those images could compare with the flight photos from 2011, for reasons not due to shortcomings of the Fuji gear, but rather due to atmospheric and weather conditions this weekend. Nevertheless, there are a few worth sharing, at the end of this post.

Instead, I would concentrate on photos of the static displays and the aviators who own, fly, or maintain them.  As such, it would be an exercise in environmental portraiture.  Now, to do this job "right", the strategy should be to carefully assess the scene, manage it within reason, pose the subjects carefully, and light them if necessary.  But in the context of an air show, with environmental conditions less than optimal (e.g. harsh sun) and lots of crowd that can't be managed, and no lighting gear, you do the best you can, utilizing as much knowledge and skill as you have to get images that are worth sharing.

First up, the cockpit of a B-52, made with the Fuji XF 10-24mm lens at 10mm, through the very small open window. Because I was just one guy in a line of maybe one hundred people climbing up a staircase to look through this window, the challenge here was to estimate the proper exposure (in manual mode) for the interior of the aircraft, without being influenced by the nuclear sunlight outside.  My total "time on target" was probably 10 seconds.  Get in, get out.  Score. 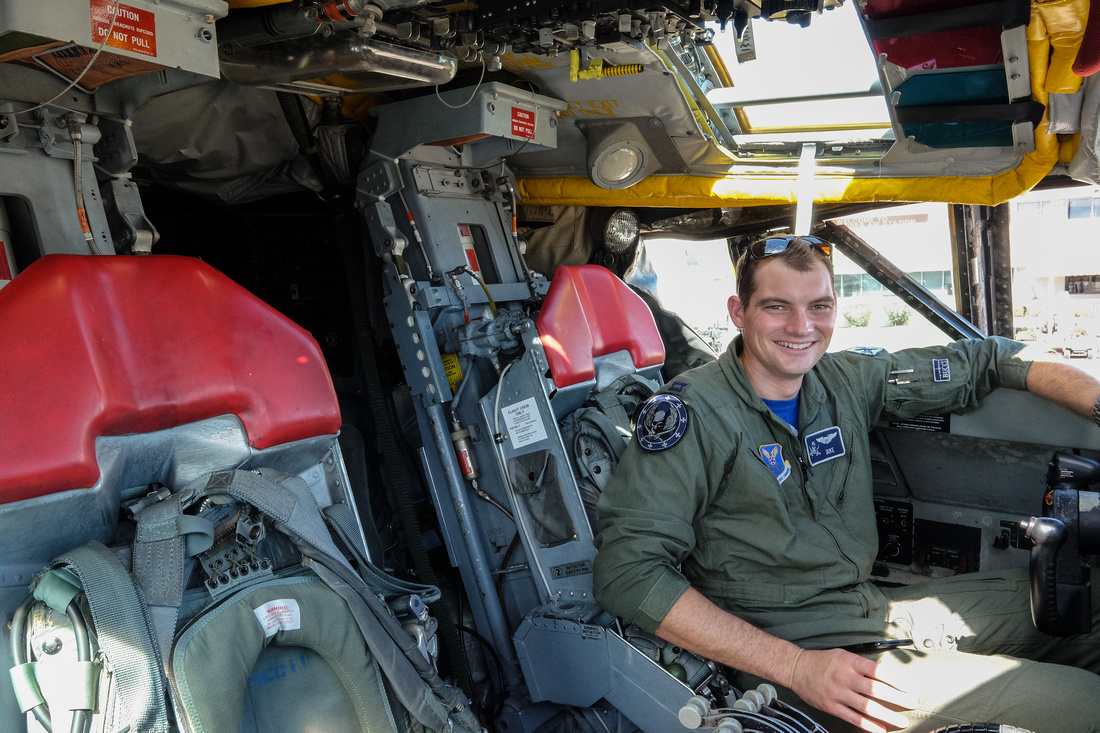 VMFA-121 is the first squadron in the Marines to fly the F-35B Joint Strike Fighter.  Here's Captain J.P. Stuart on the flight line with the F-35B. 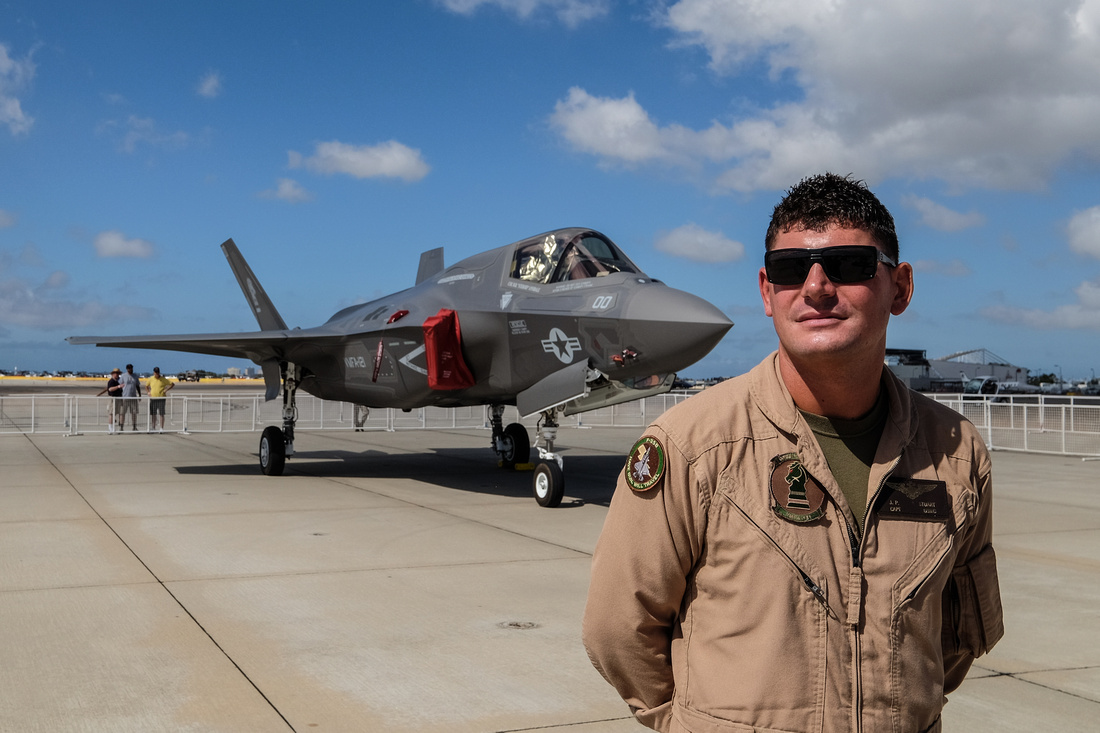 To get this shot, all l had to do was ask Capt. Stuart to move a few feet closer to the nose of the jet, and turn his gaze to give me the loop lighting on his face that I wanted.  Of course, I couldn't have the foil sun shields removed from inside the cockpit, nor the three spies trespassing behind the jet. Same 10-24mm lens.

This is an old, Vietnam-era Huey helicopter, used primarily for search and rescue missions.  Still armed with machine guns and rocket pods, there were little kids all over the thing.  I asked this crewman to stand precisely where I wanted him, and waited for a four year-old to finish firing the machine gun.  Immediately after this snap, he was back blasting away. 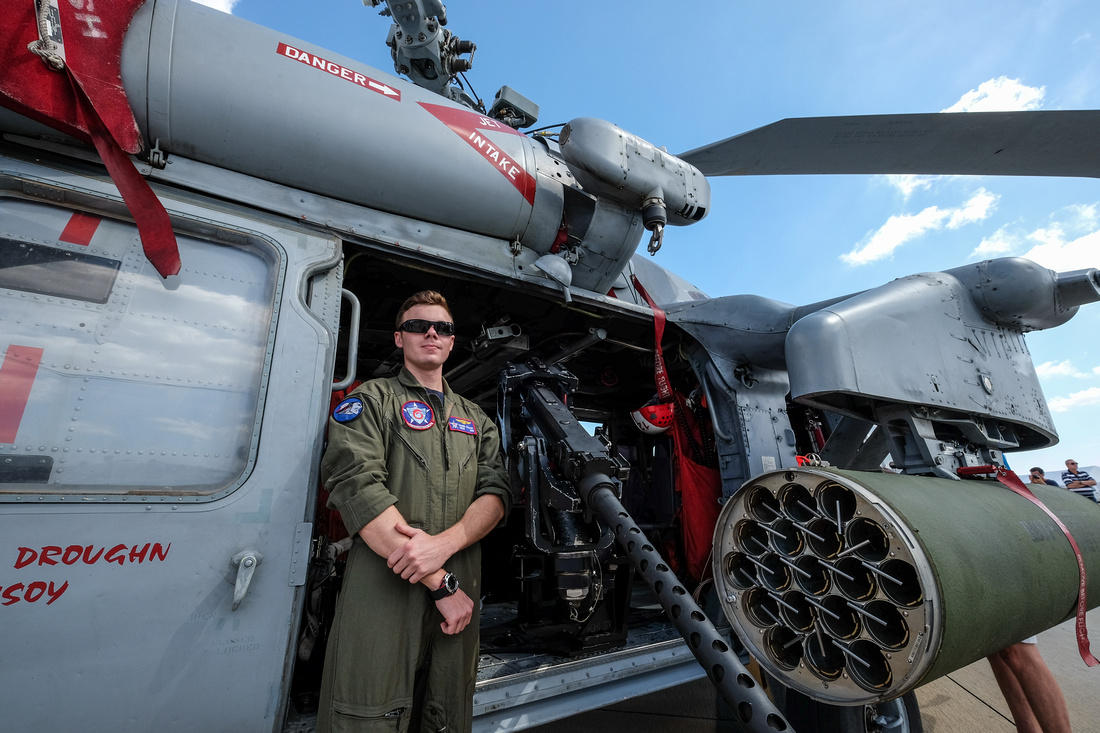 Another helicopter on display is the CH-53E Super Stallion, the largest and heaviest helicopter in the US military. It can carry up to 16 tons and can retrieve downed aircraft, including another CH-53.  For this shot, I simply asked the crew member to don his helmet.  He asked, "Can I put on my vest, too?"  Sure. 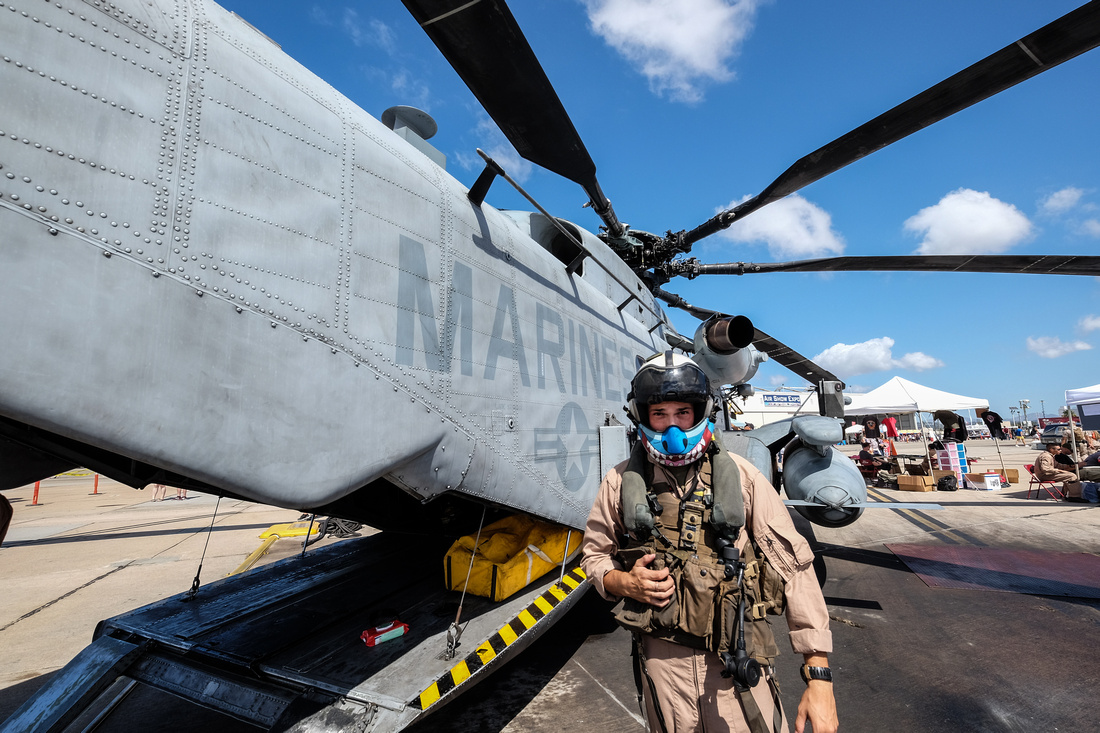 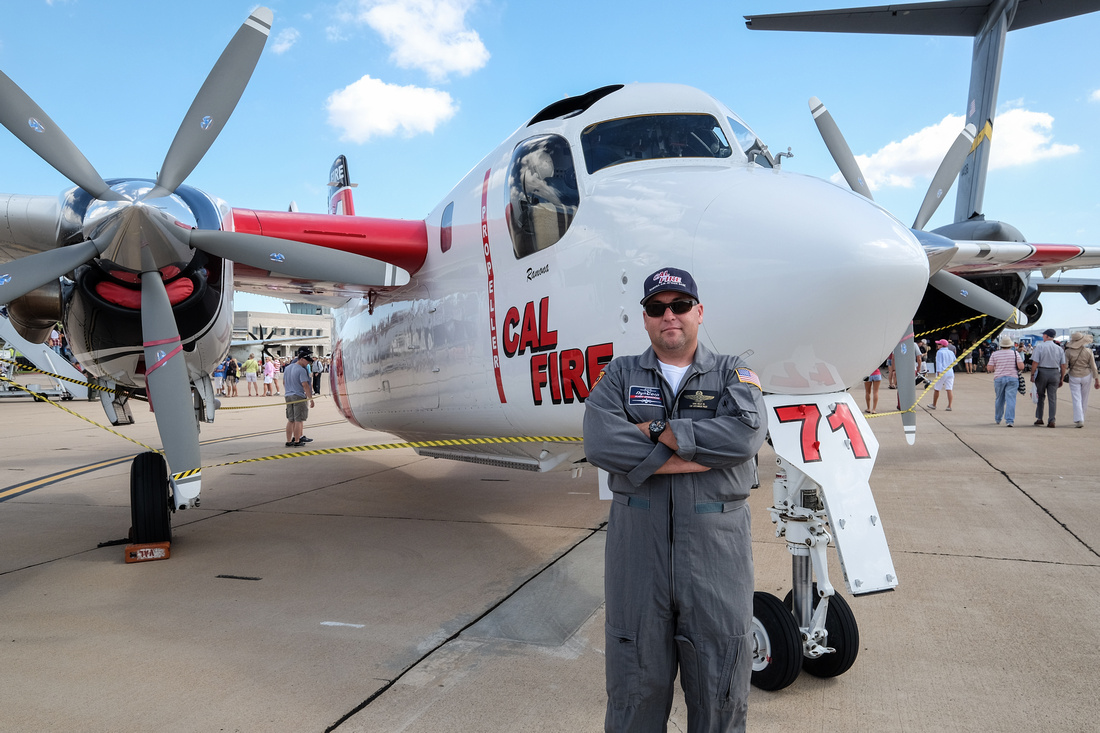 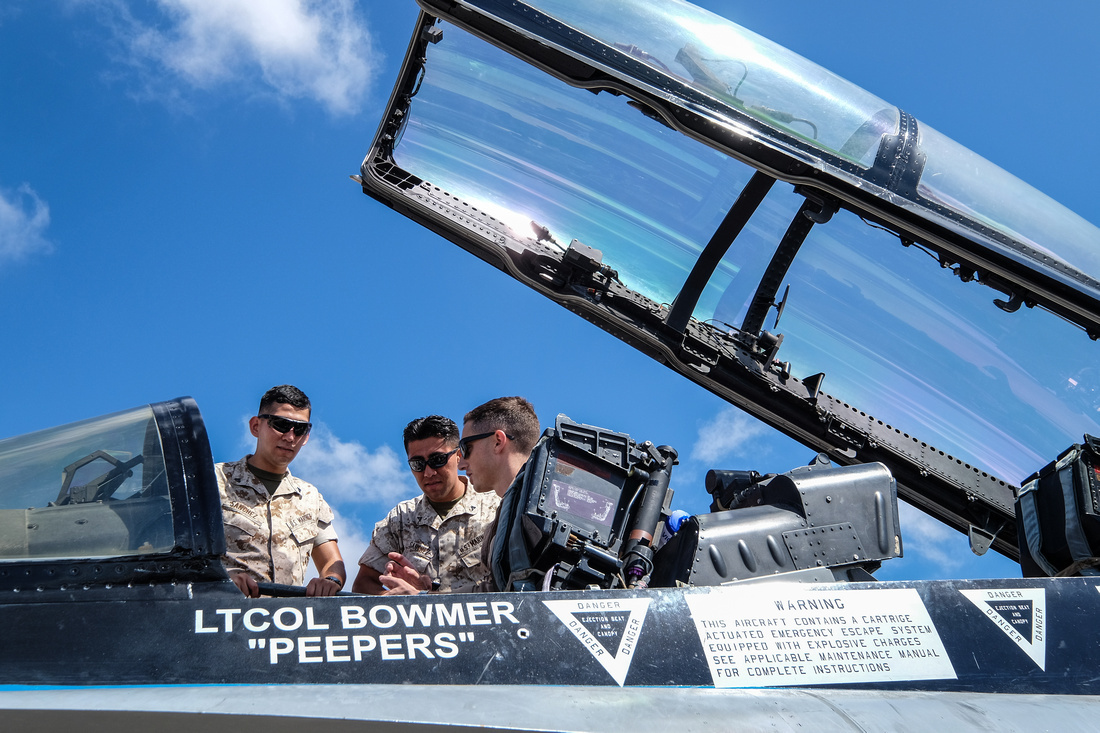 The C-17 Globemaster III is simply huge.  It can transport two M1A1 Abrams tanks inside its massive hold, though for weight reasons, it typically will carry only one.  The cargo bay was filled with visitors, and Sgt. Trowbridge was there to manage the crowd and answer questions.  My only question to him was to see if he could move about one foot to his left, enabling the light to fully illuminate his face.  Three elements make this photograph for me: the filtered light on Sgt. Trowbridge, the girl looking at him on the right, and the illuminated back wall of the C-17, courtesy of a door to the left, a window on the right, and an escape hatch on the roof of the plane. 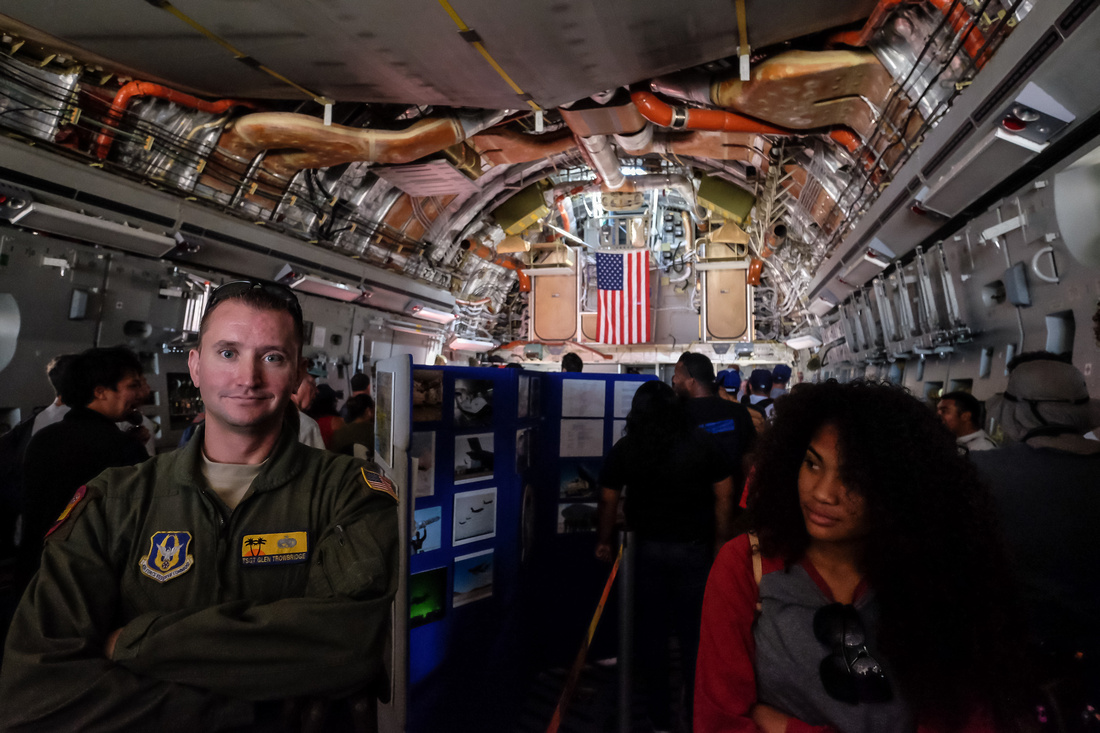 When I first saw this biplane, I had to stop and look at it twice.  It's the largest biplane ever produced.  Moreover, it was first built in 1946, after the Second World War at the beginning of the jet age, and it was built in Russia.  It's the Antonov AN-2, and it's still in use in some third world countries today. 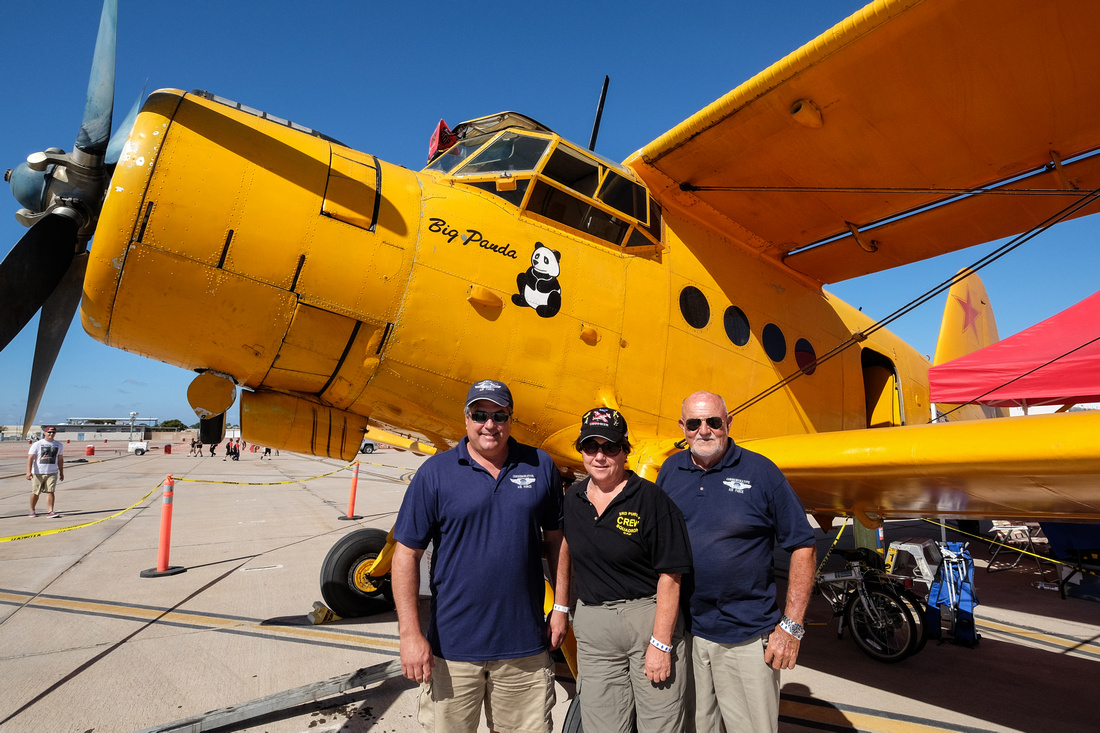 The TBM-3E Avenger was a carrier-based torpedo bomber extensively used in the Pacific theater during World War II. It was the heaviest carrier-capable plane of its time, carrying one huge torpedo under its belly in addition to two machine guns and a crew of three. The Avenger was credited with the sinking of the Japanese super battleships Musashi and Yamato. 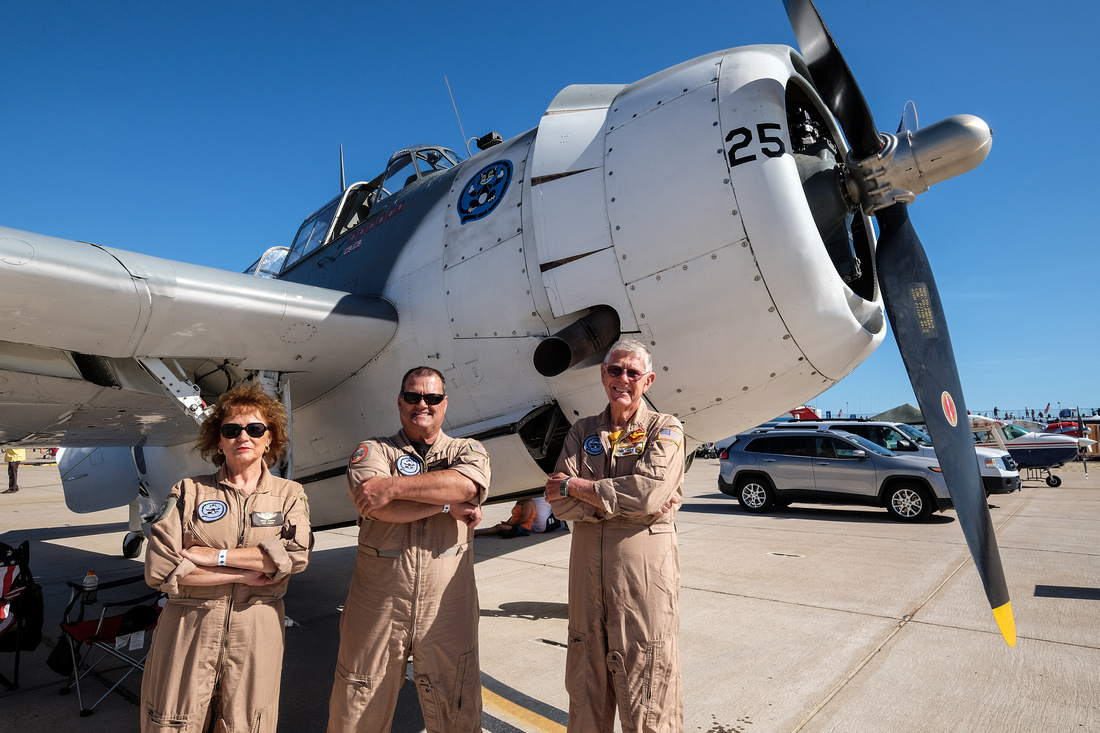 This is the AirGyro Cavalon, a European gyroplane.  It's a two-seater (with luxurious leather seats), claims to be able to fly long distances through weather you'd never want to fly it in, and able to land on a dime.  You can have one for 86,000 euro. 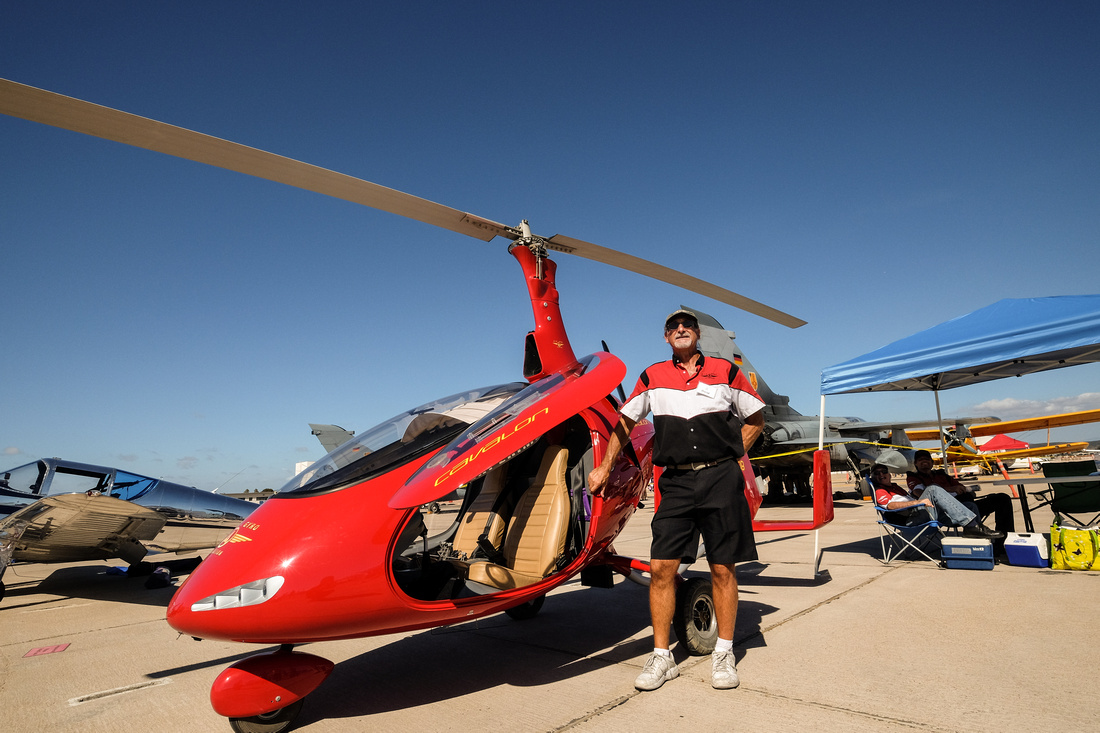 Here are three members of the eight-man Swiss Breitling L-39 Jet Demonstration Team, walking quickly across the tarmac.  This is a total grab shot, as they were practically running at the time.  I raised my camera and snapped off a couple of frames before they began mugging for me. 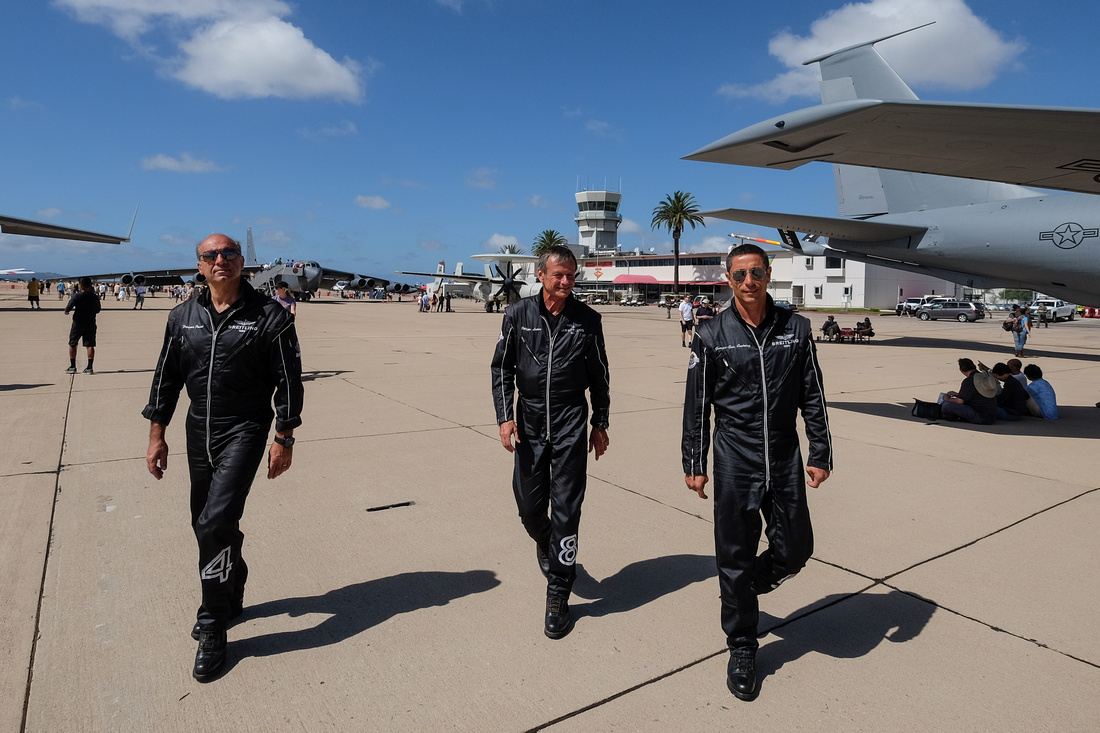 Though my goal was to capture some decent environmental portraits of these aviators, and without much expectation of impactful flight photos, I was fairly impressed with some of my Blue Angels photos.  Here are four that I thought worked well. 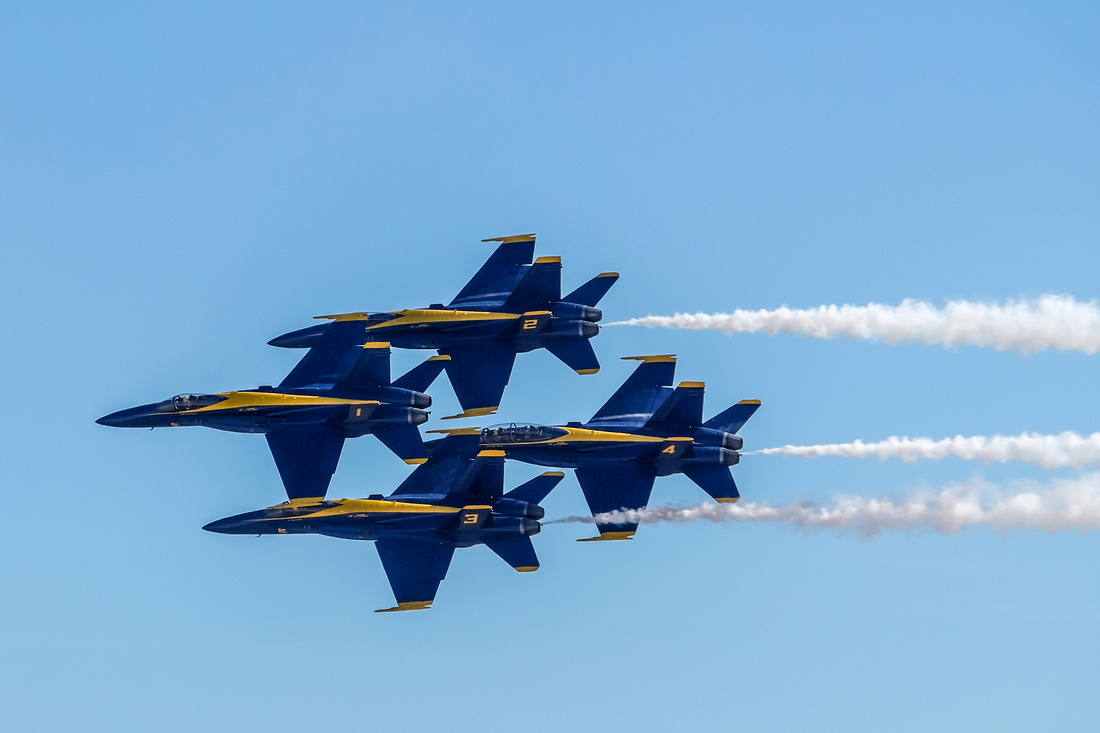 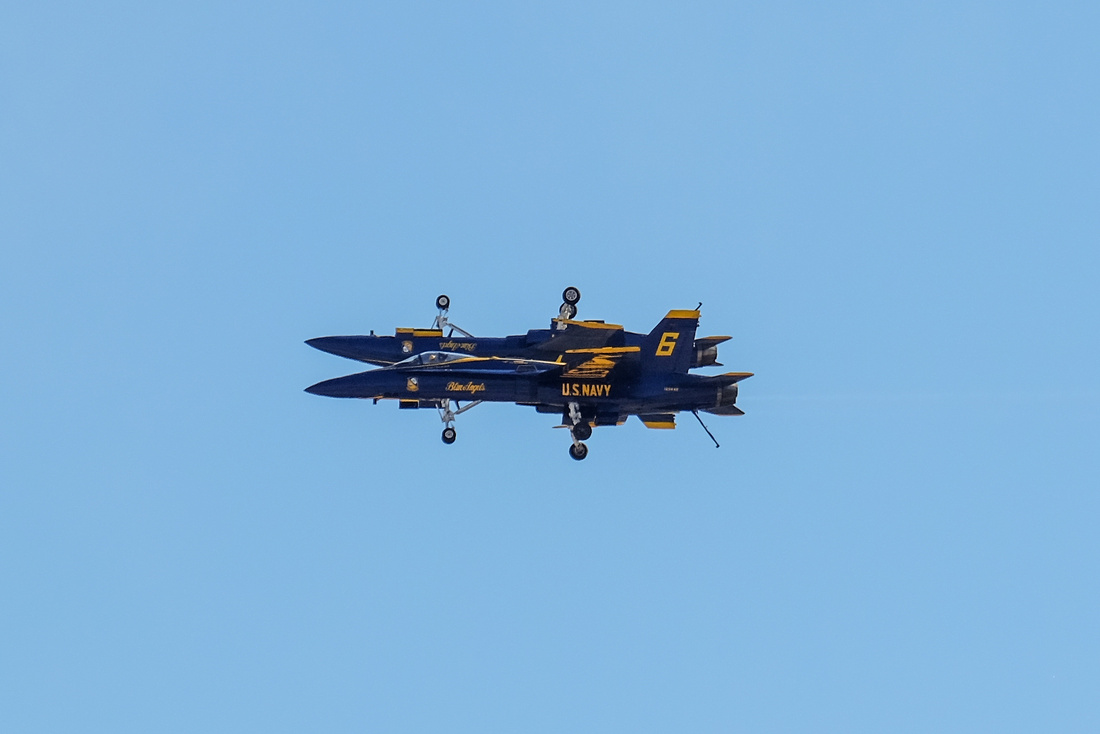