Nick and Meredith: Or, Why I'm Not a Wedding Photographer 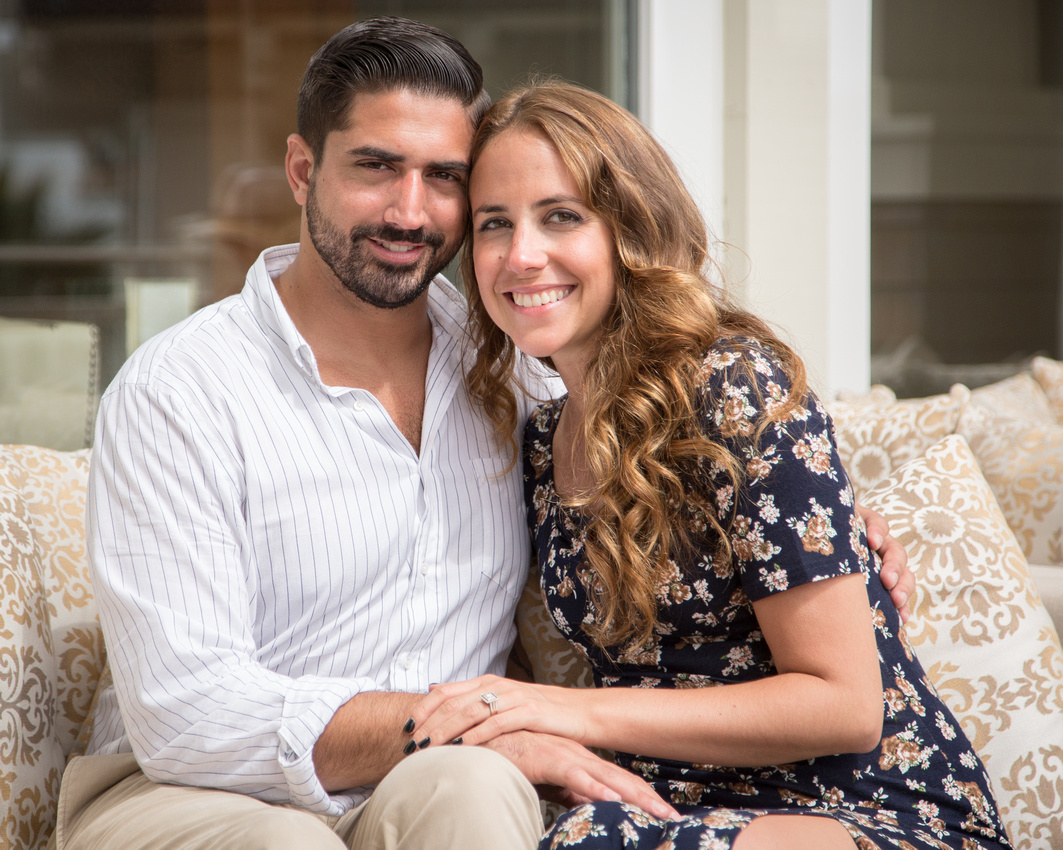 First things first:  I'm pretty much a generalist photographer, with an emphasis on performing arts.  Dance, theater, jazz, choral, you name it.  Along with that comes portraiture.  I also shoot occasional sports, and when I'm lucky, landscape and travel.  But there are two things I absolutely do not do: video and weddings.  Both scare me to death.  Why video?  I have no idea what to do with it.  It's more hassle than it's worth, at least to me.  And weddings?  The pressure. For everything else I do, there's the ever-present possibility of a missed shot, but another opportunity to get a better one.  Or a do-over. Every sports shooter misses a shot for whatever reason, but there's another one right around the corner (unless it's the game winning play, then it's "oh, shit...")  But with weddings, there's no do-over, just the gnawing cranial pressure to Not Screw This Up.  Several years ago, I did one wedding as a favor to a good friend; the photos turned out fine, better than the marriage did.  But that's another story.

While covering a 20th year class reunion for the inaugural class of Santa Margarita Catholic High School, one of the members of the staff asked me if I'd be willing to photograph her son as he proposed marriage to his intended bride.  It would be surreptitious, unknown to her until the deed was done.  I said I'd do it, as long as we could carefully plan it, so I could get the shots the couple needed, in decent light and camera position, with nobody intruding into the field of view.  Okay, she said, and we made a plan.  It would be me, alone; no assistant, no lighting gear, no reflector, one camera, one lens.  I saw myself as a gumshoe private eye in one of those '50s detective movies.

A couple of days before the event was to go down, I met Nick at the Montage Resort in Laguna Beach, to scout out possible locations, considering sun angle, time of day, avoidance of intruders into the scene, and importantly, the beautiful backdrop of the Laguna coastline and the Pacific Ocean.  We found The Spot.  The day before the event, I went back again, to carefully consider the sun angle at the scheduled time of day.  At that time, at that specific location, I concluded that I'd get a lovely loop light on the bride's face as she looked lovingly into the eyes of her man when he dropped to his knees to propose.  Slam dunk.  Aperture priority, no exposure compensation, no nothin'.  A chimp could make that picture, as long as he was looking at the couple and could find the shutter.  We'd do the picture at 10:30 in the morning (hazy sun at that time of day), and Nick and Meredith would go up to the fine dining restaurant of the Montage for lunch.  He booked a table with a wonderful view, and told the staff that it was his and Meredith's engagement, and hoped for the best time ever.

Comes now the day of the blessed event.  At 10:00 I crest the hill down to the Montage, only to see a wall of dense fog.  No resort, no Laguna Beach coastline, no Pacific Ocean.  No nothin'.  No reschedule either.  Nick has planned this special day with his bride down to a T.  It was going to be a great day, no matter what.  Okay, as I say, in for a penny, in for a pound.

I go to our intended spot to make sure nobody else decides to camp out there for the morning.  Not much chance of that, given the total lack of view, but that's why I'm there, so I spend my time testing exposures on passers-by, making sure that I can get good exposure on the bride's face, even if the foggy-bright sky would pretty much blow out.  Above all, I say to myself, DON'T SCREW THIS UP!  I stay with Aperture Priority, and ride the exposure compensation up or down depending on what the cloudy bright sky is doing at any moment, to give Meredith enough light in the face.

But the couple is late.  At 10:45, fifteen minutes after our scheduled time to do the deed, they arrive at the Montage.  Nick and I are frantically texting each other about whether to do it RIGHT NOW, or wait until after lunch.  As they walk from the valet toward the restaurant, Nick decides to do it after lunch, but the staff at the restaurant needs to know that the Special Event hasn't happened yet. They can't blow the secret!  So I hot-foot it to the nearest house phone, to let the receptionist know NOT TO BLOW IT!

Back to holding my spot while Nick and Meredith have a wonderful lunch.  About half-way through, though, I realize that I haven't fed the parking meter enough to account for the extra time this is taking.  Some friendly lifeguards let me know that the chances of getting a parking ticket from the City of Laguna Beach is somewhere around 100%.  Oh well, again, in for a penny, in for about seventy-five bucks.  I can't leave my post, as the couple could be there ANY MINUTE.

Finally, I see them approaching from the hotel.  I move from THE SPOT to a location I've already determined I'd shoot from, even though the fog is still with us. I'm stealthy as hell, looking out of the corner of my eye as they come to the location.  Nick is talking to Meredith, and he then drops to his knee.  I bring the camera up, and shoot like a man posessed. 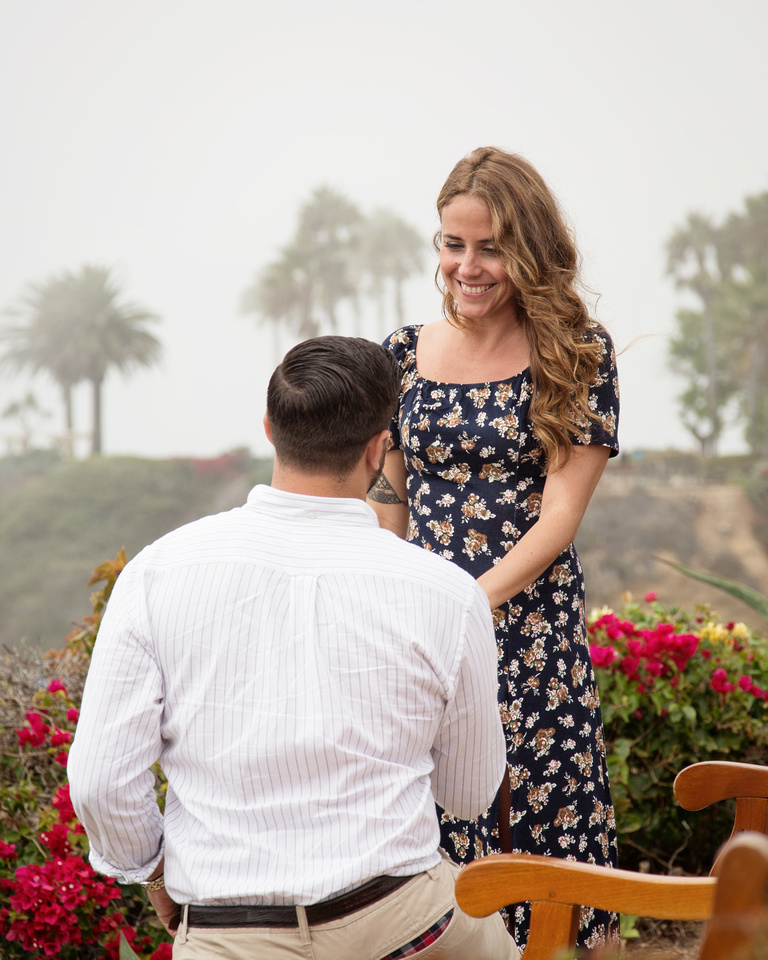 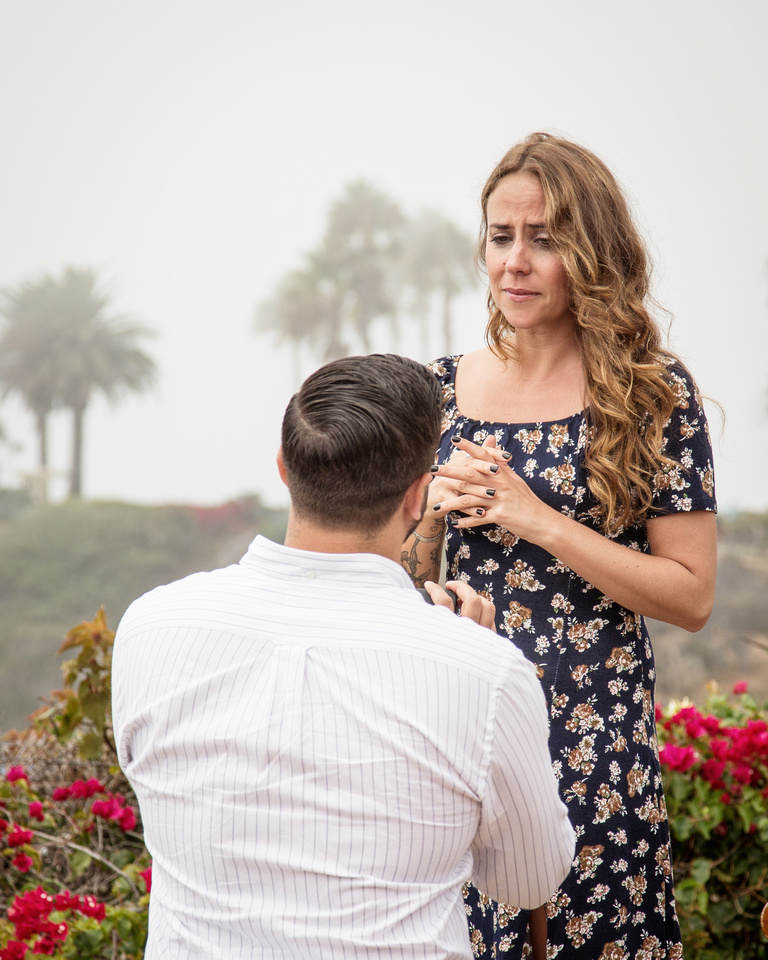 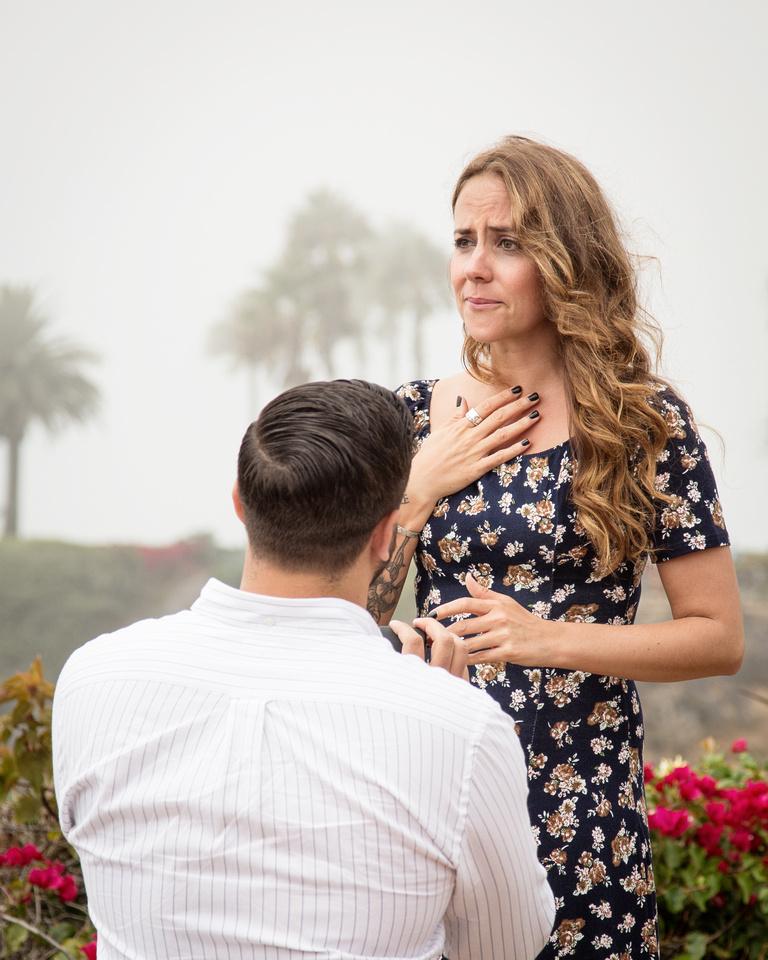 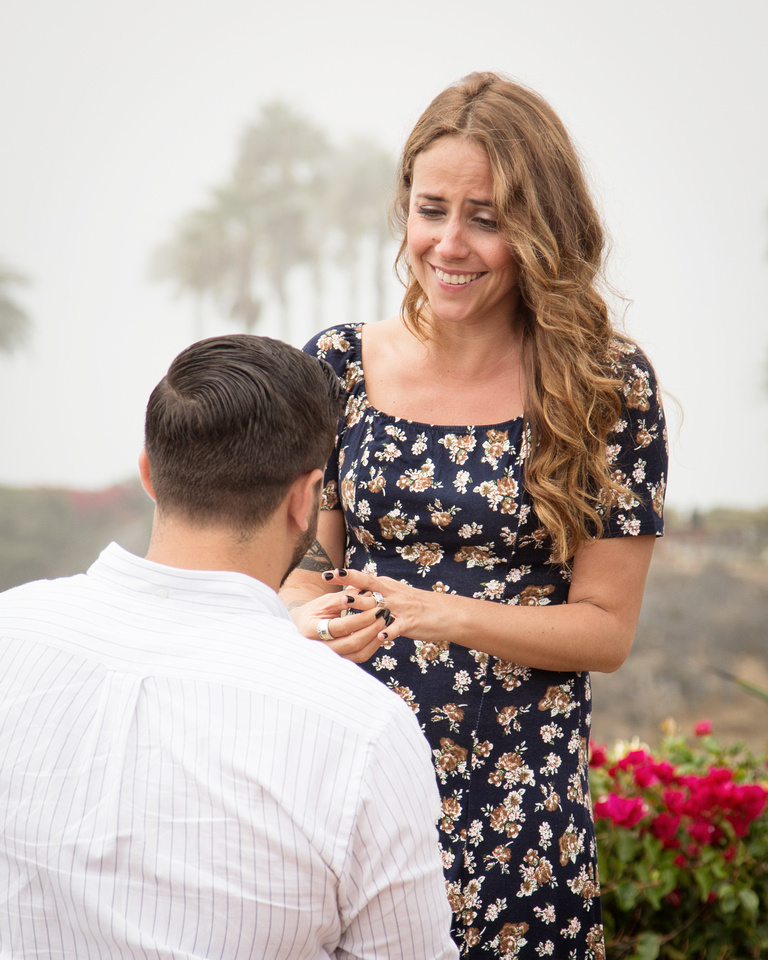 At this point, I steal a look at my camera's LCD, and realize that the exposures are good, and I've caught THE MOMENT, several, in fact.  Meredith processes what has just happened, and she reaches for Nick.  Again, I bring the camera up and fire away. 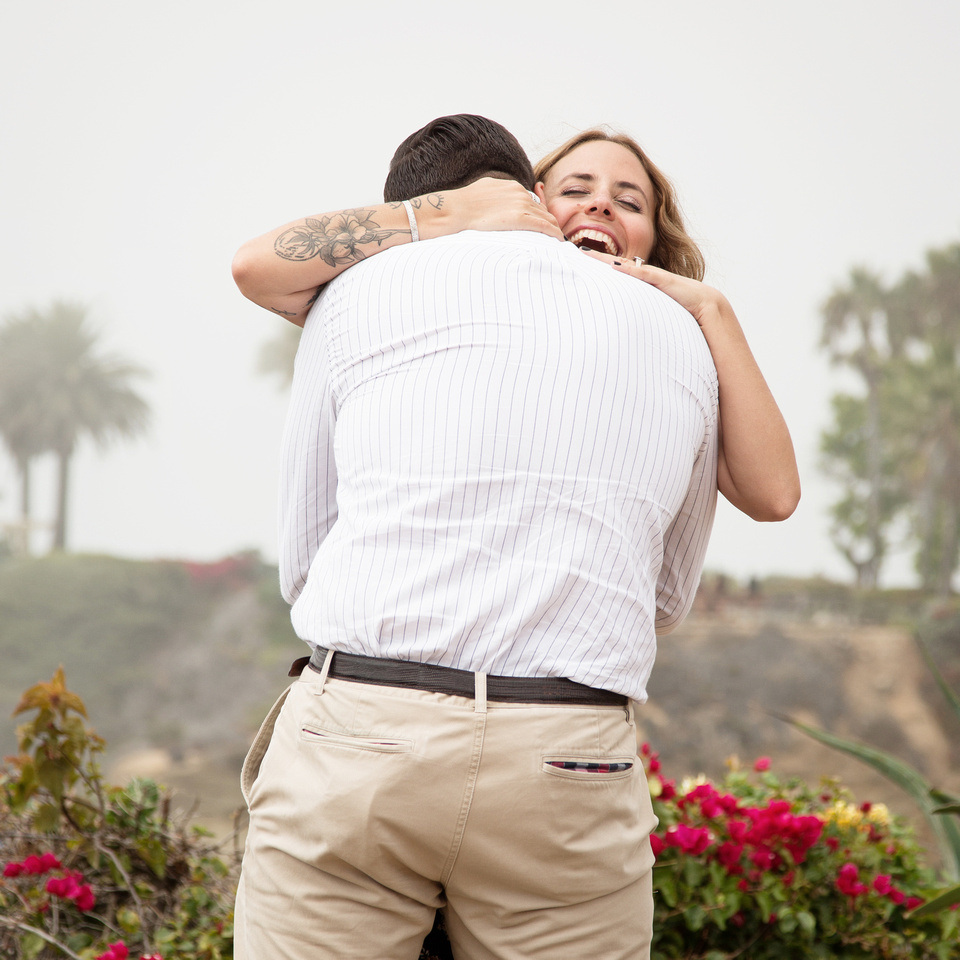 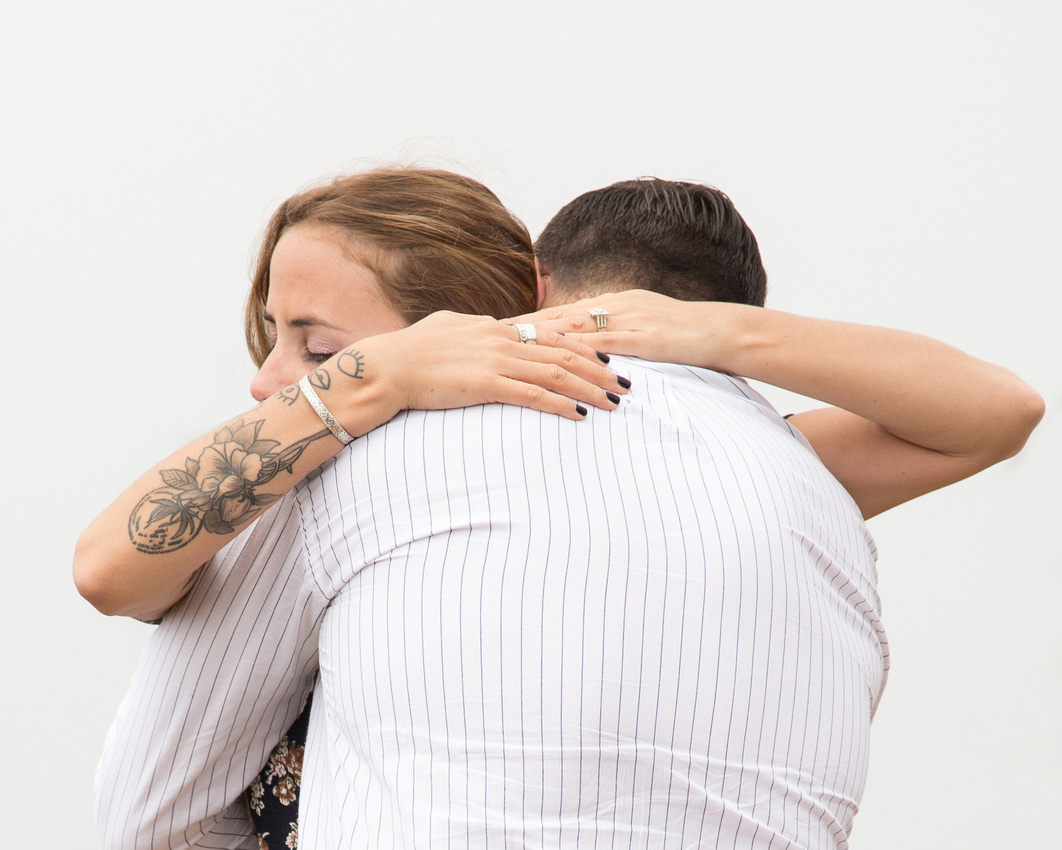 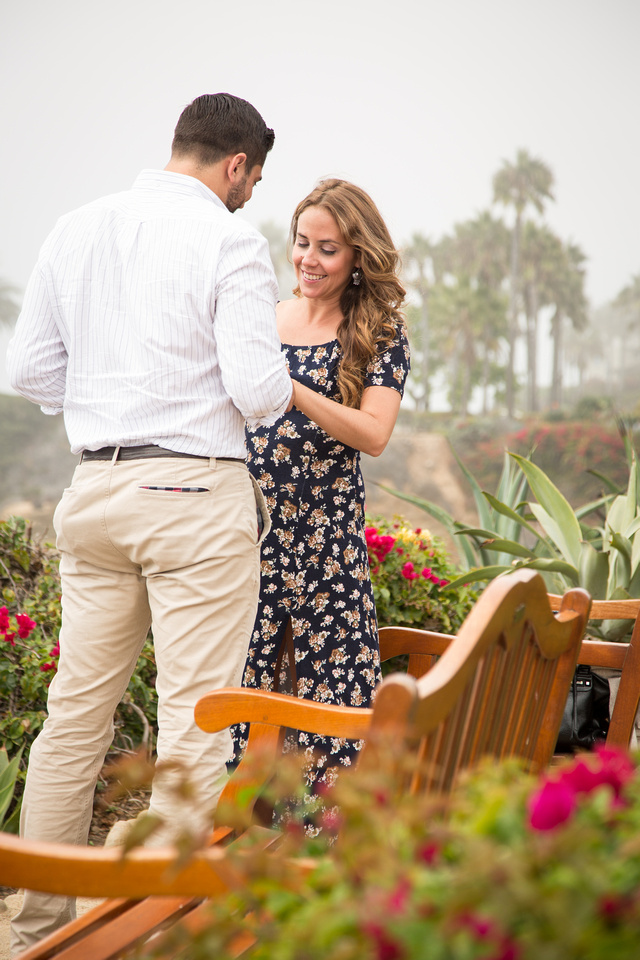 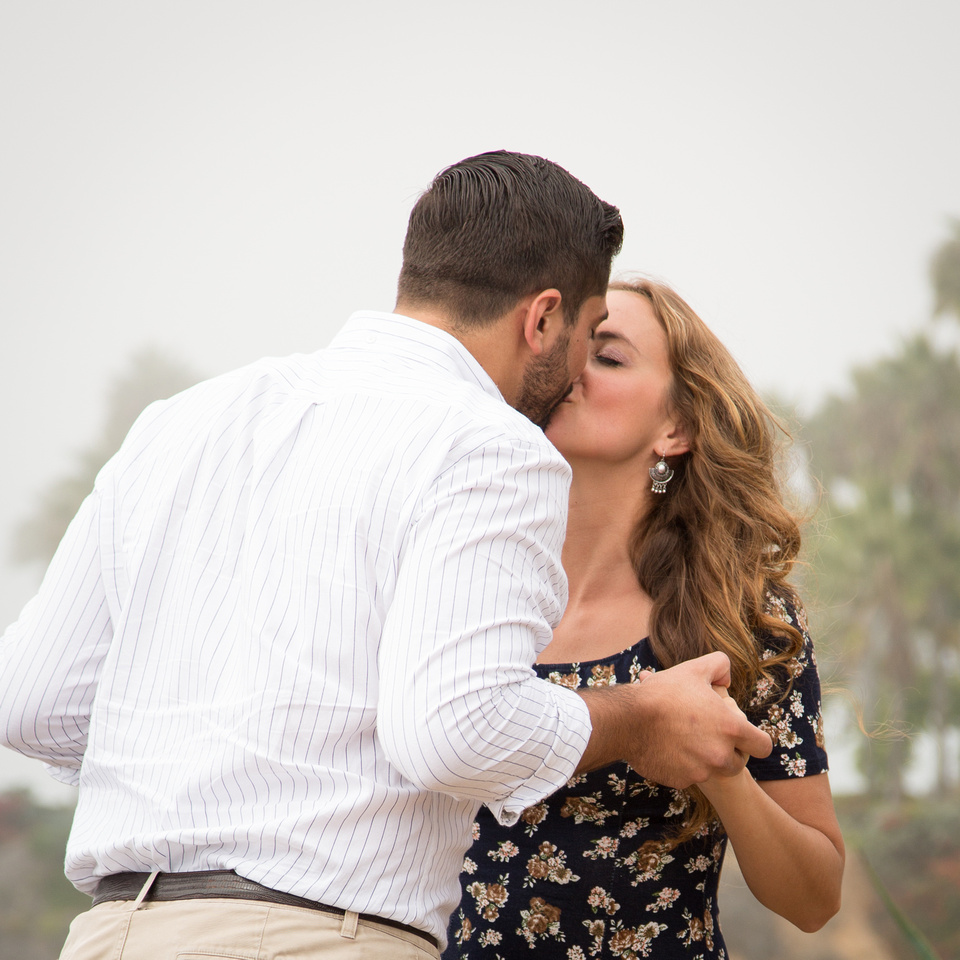 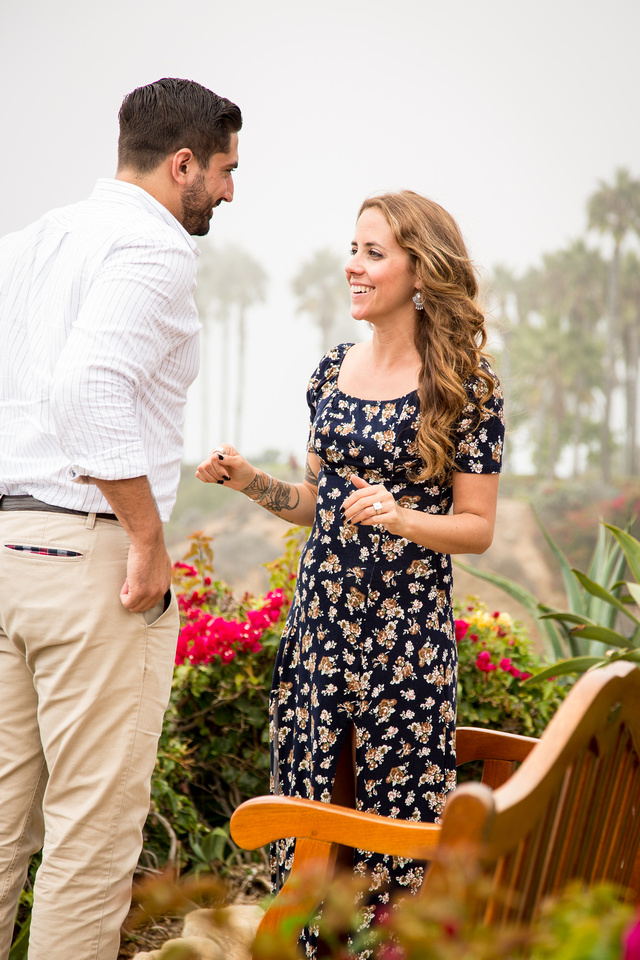 At this moment, I later find out, I've been made, by Meredith.  She says to Nick, "There's a man in the bushes over there.  Is he with us, or is he a creep?"  Fortunately, Nick assures her that the creep in the bushes is, in fact, legit.  Meredith smiles, and our eyes meet for the first time. 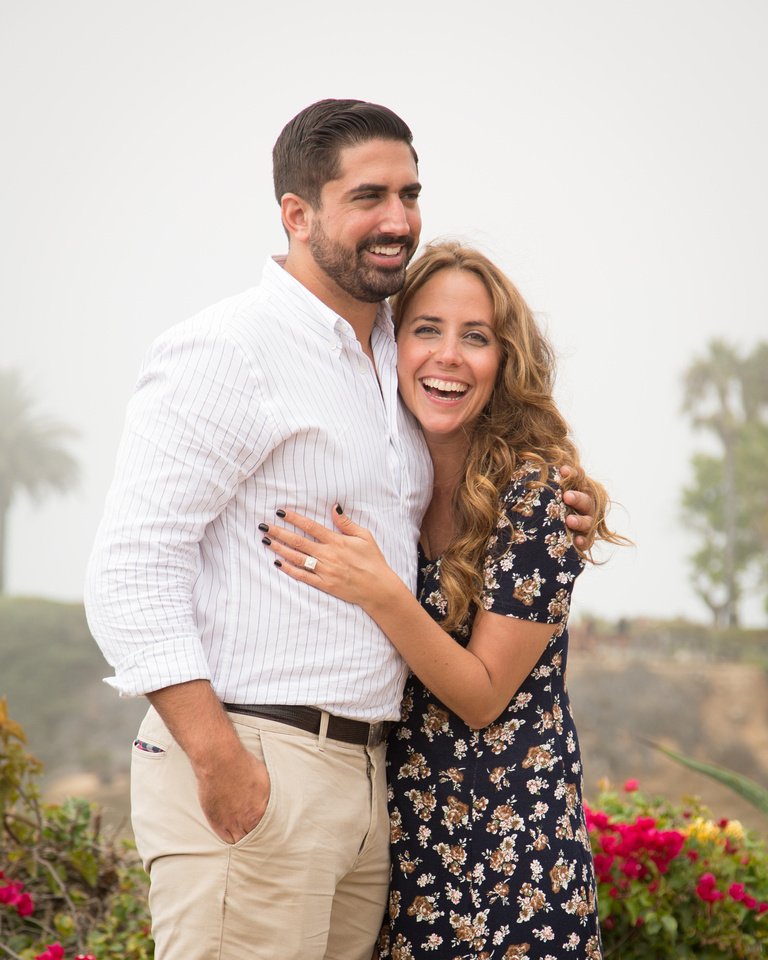 But there are a couple more frames to get before I leave my post.  Nick knows that Meredith has made him the happiest guy alive. 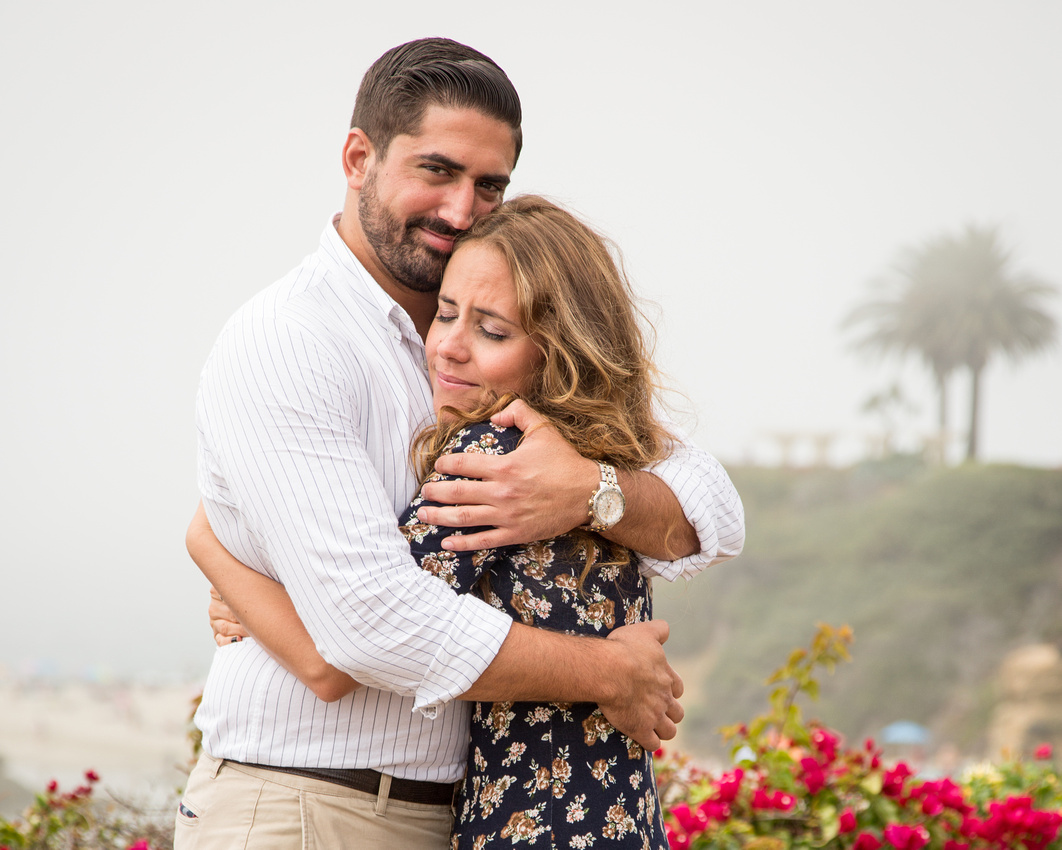 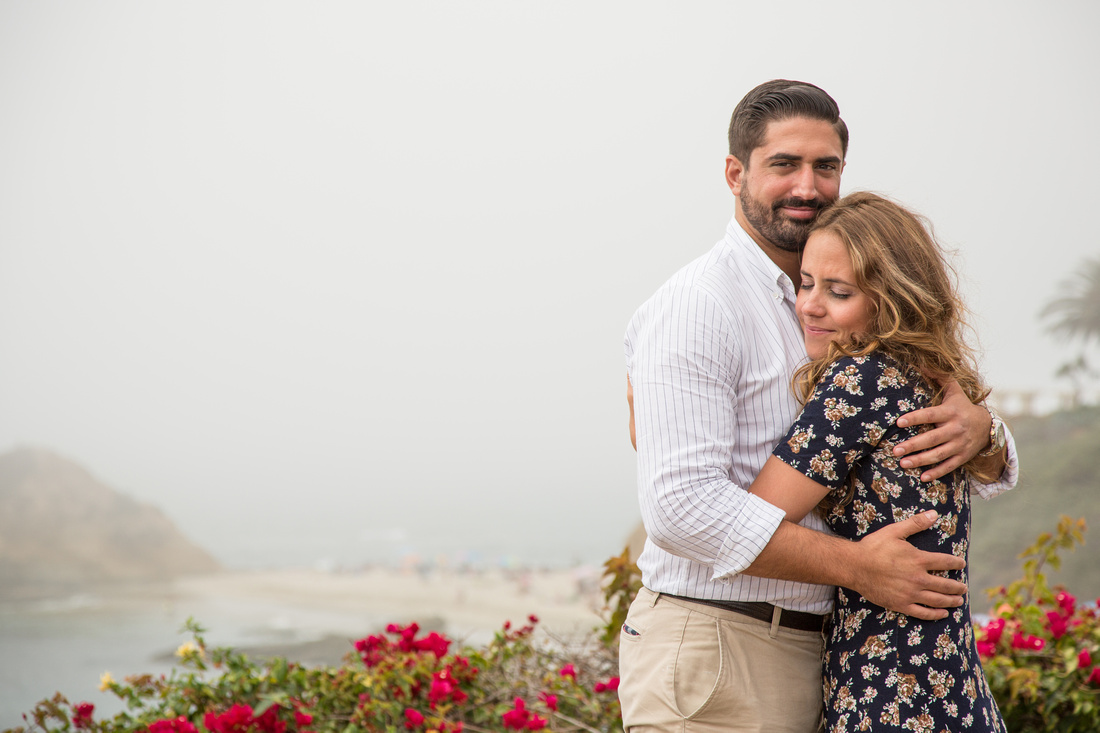 You can see what might have been in the background.  It's there, but it's totally superfluous.

We had planned all along to get some additional shots after THE SHOT, so we spent a few more minutes around the exterior of the Montage. 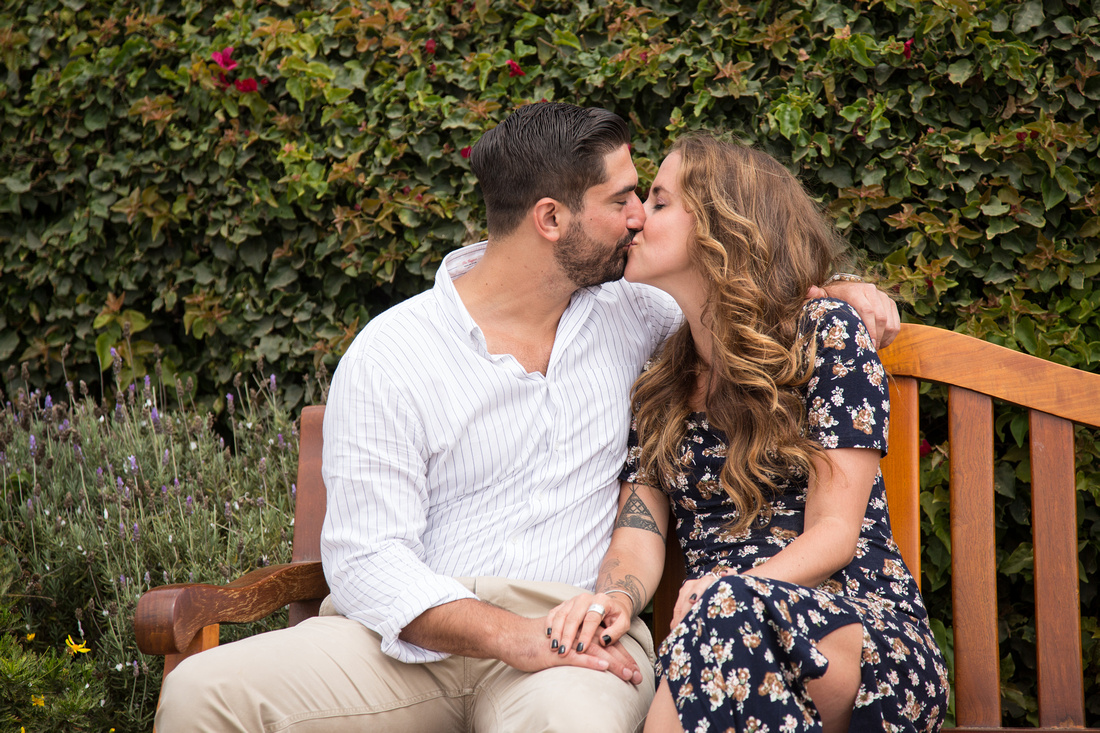 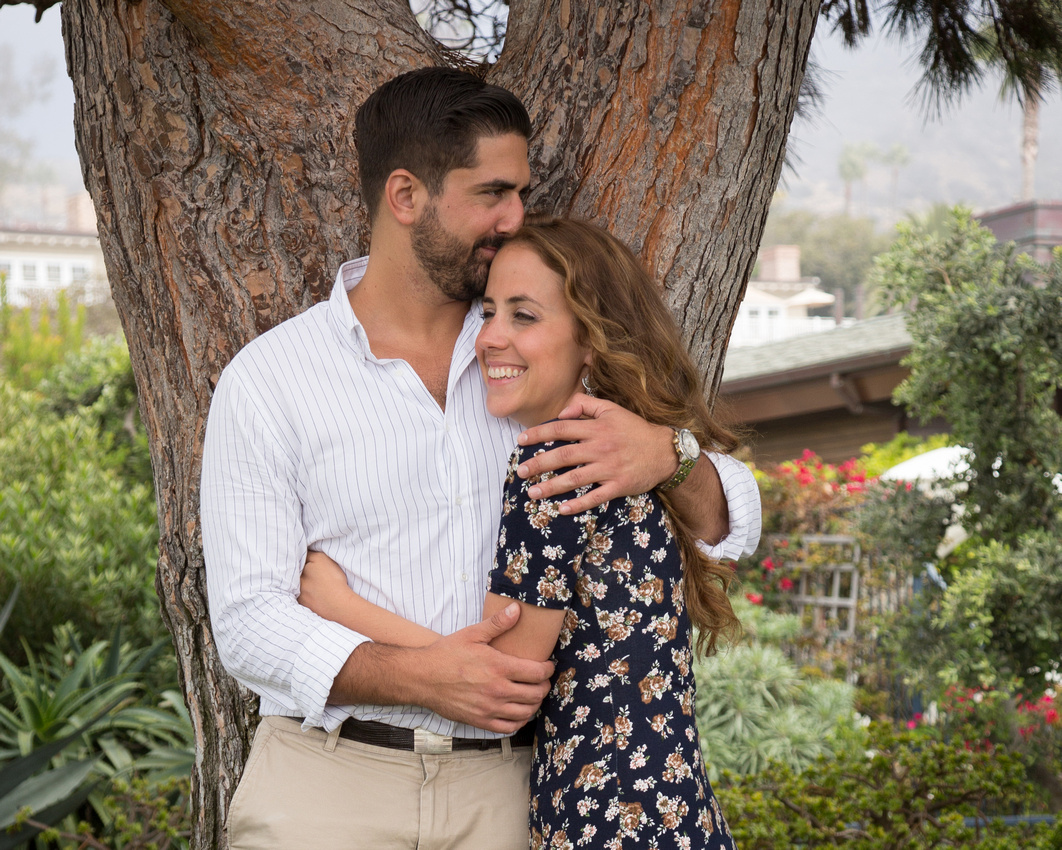 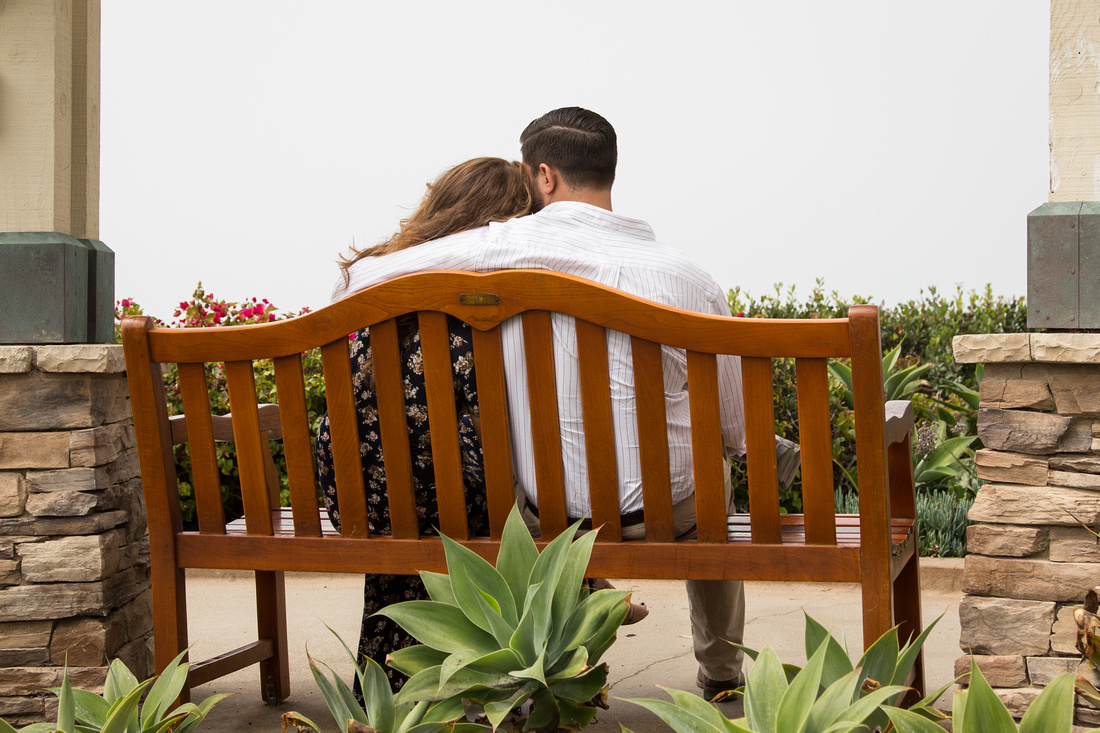 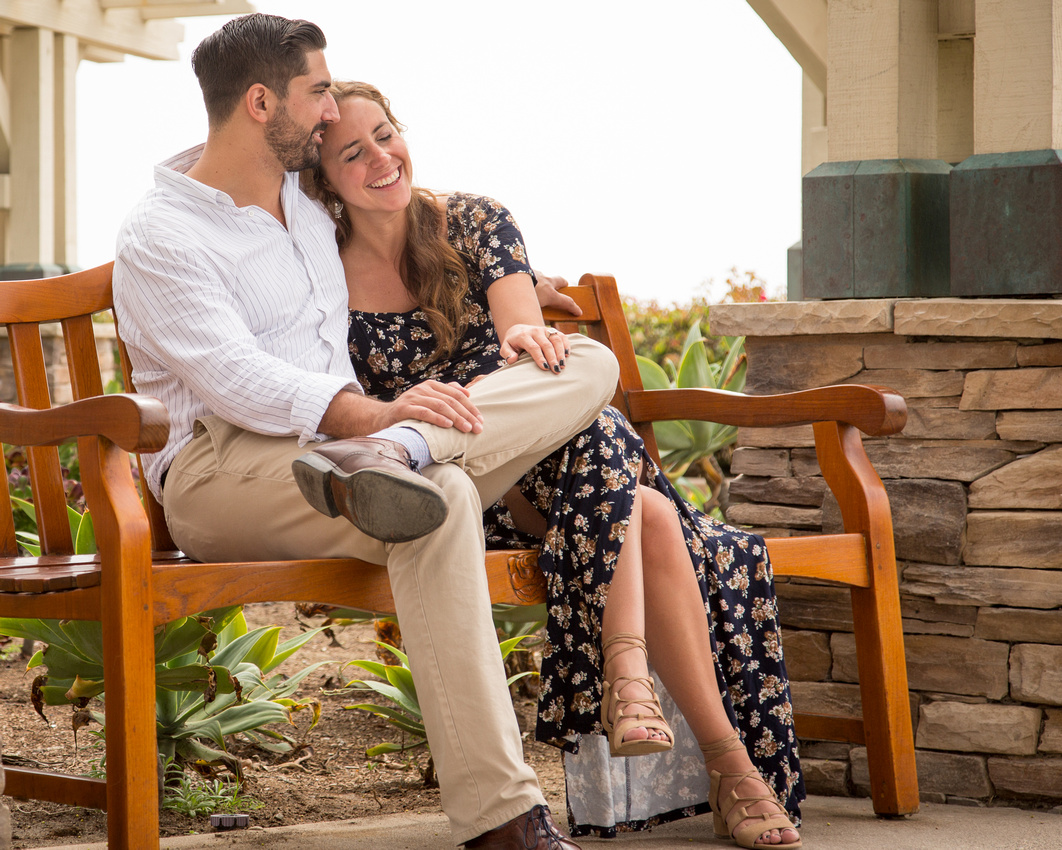 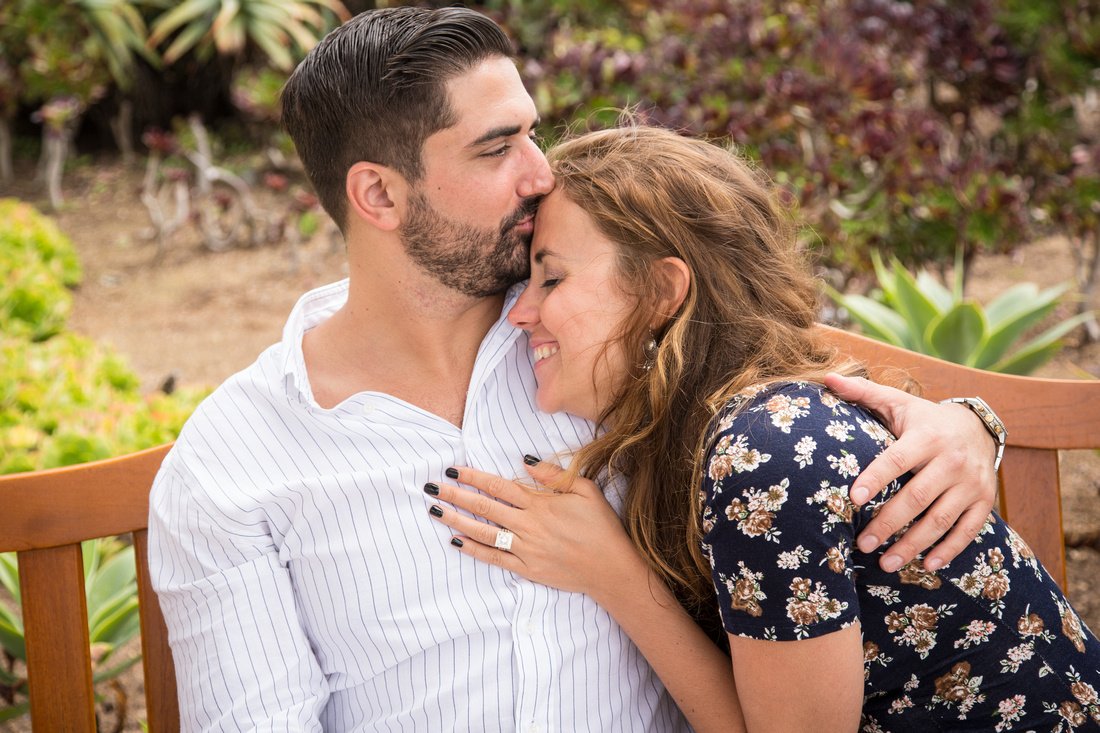 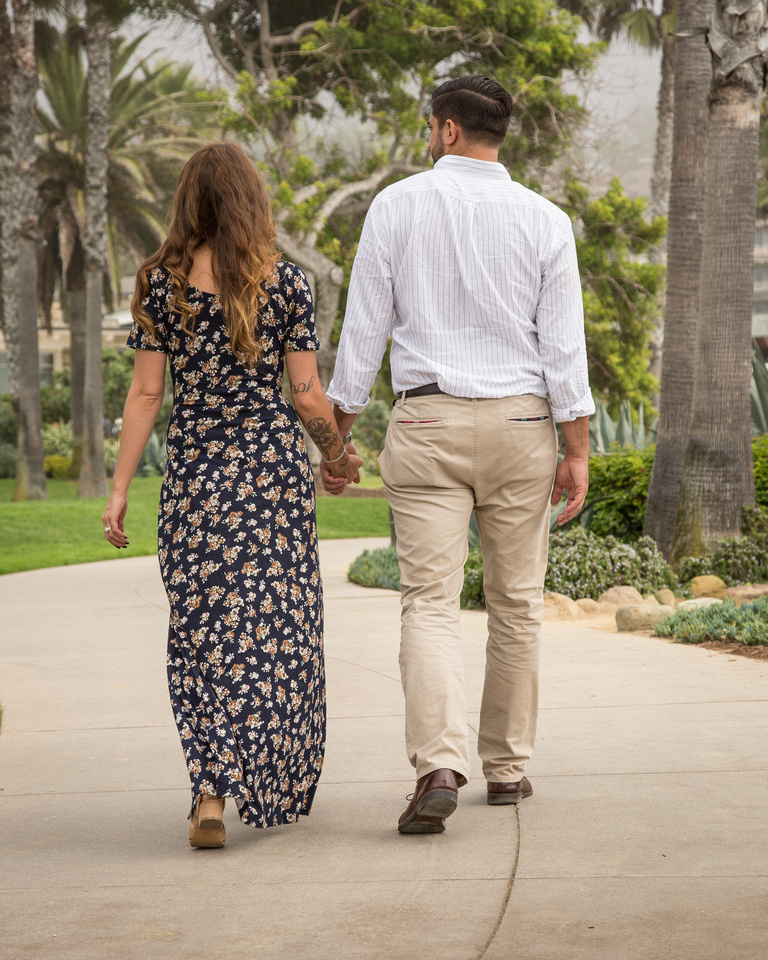 Before we left, as I was sure my car was about to get towed, I suggested one last location, in the lobby of the resort.  It's a beautiful hotel, and the lobby looks like a well-appointed lodge from the Craftsman era.  We chose the fireplace as a good setting. 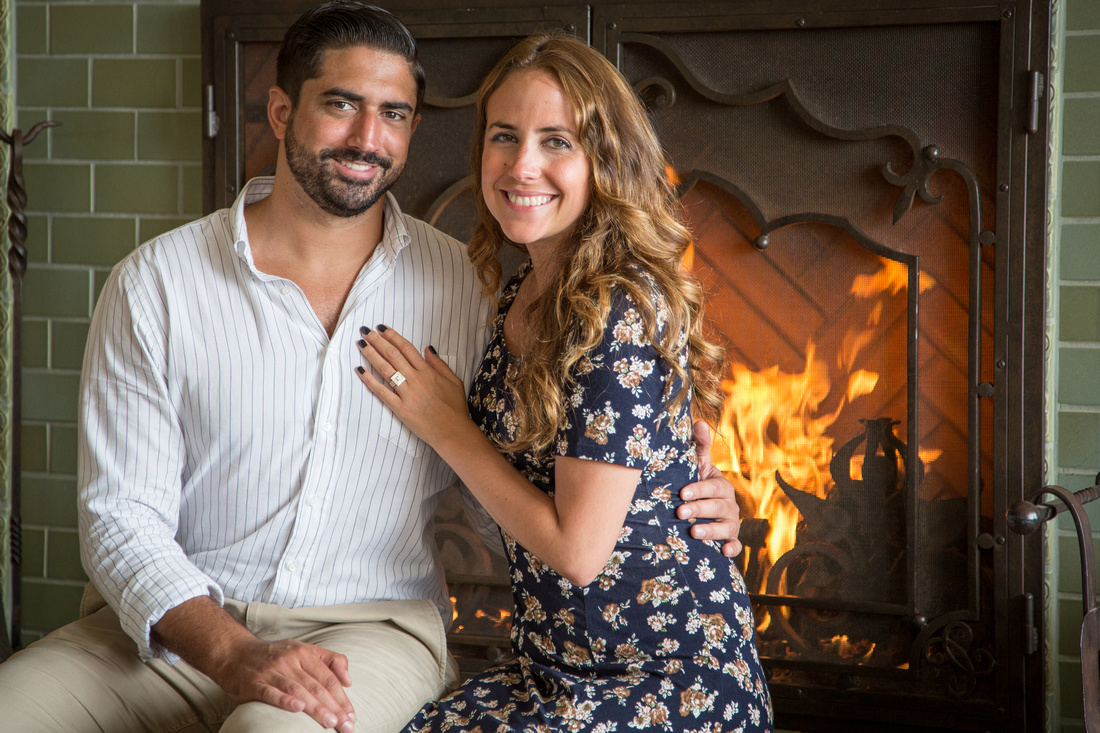 We then decided on a few final shots on a patio just outside, overlooking the property and the ocean (out there somewhere).  That view was not going to happen, but shooting the other way, with the couple on a sofa facing the ocean was a good alternative. 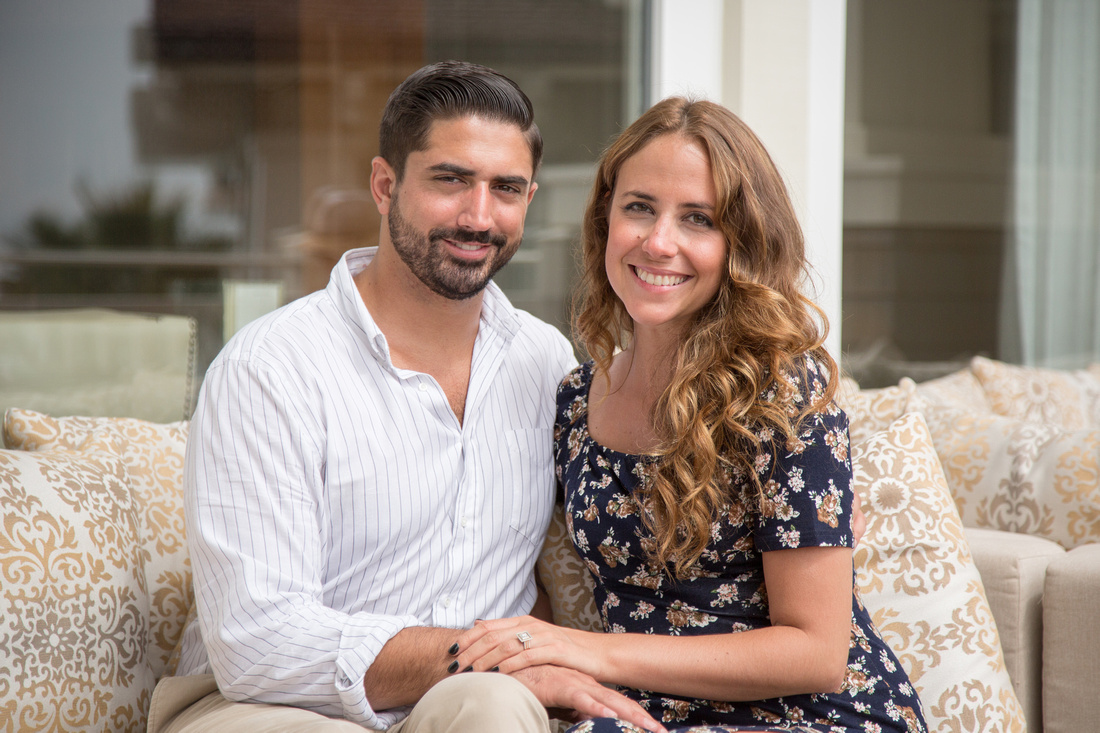 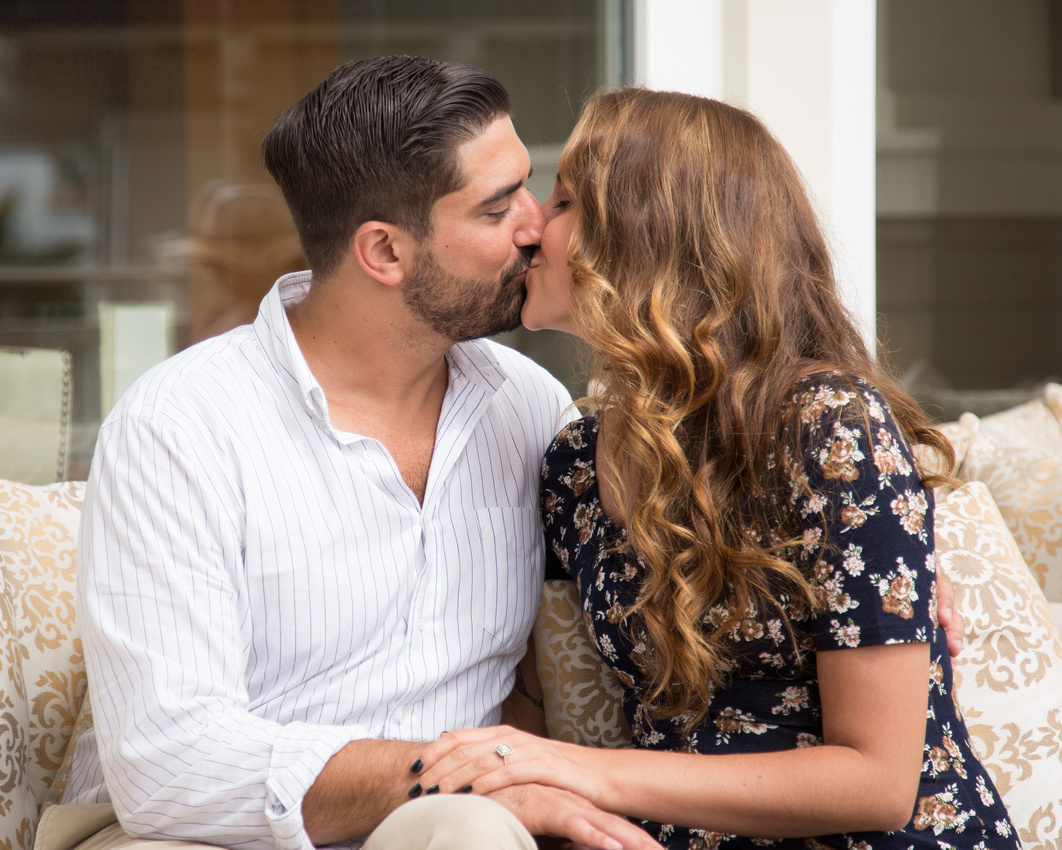 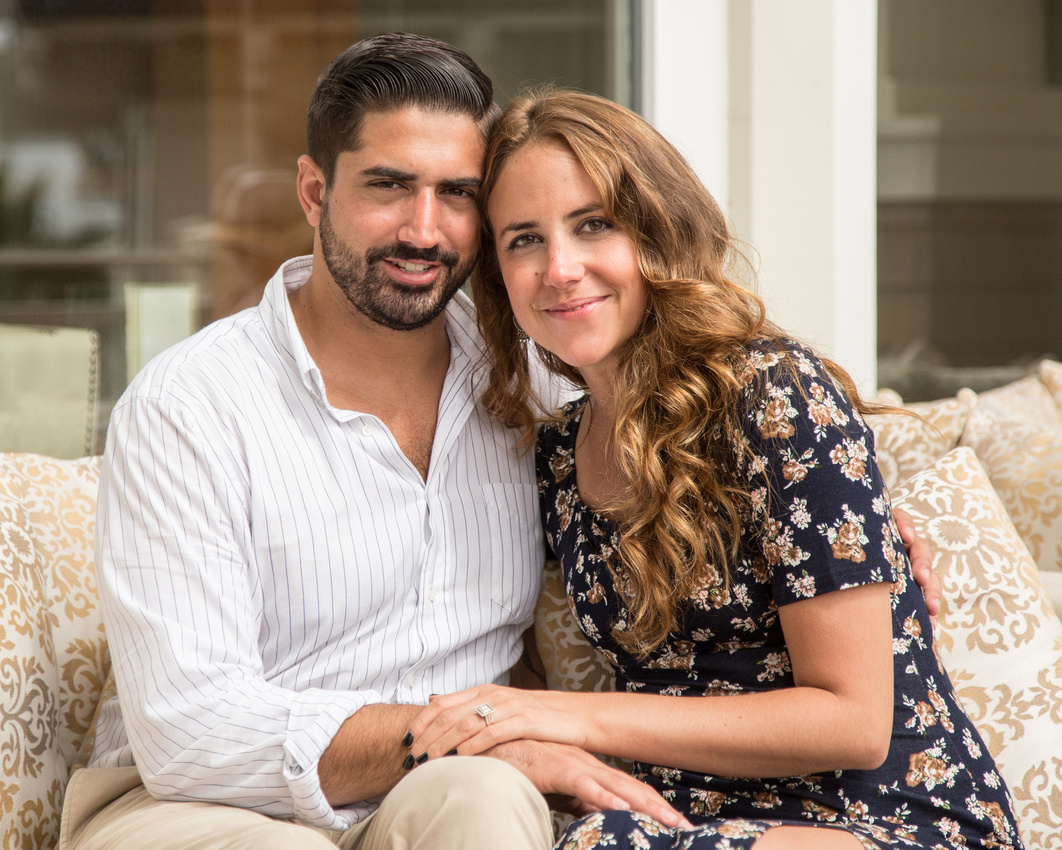 Just out of frame, to my right, was a lady sitting alone at a table, working on her laptop.  She began chatting up the couple, wanting to know way more details of their lives than she had any right to, but she was rather amusing.  I kept shooting and caught what might be the best shots of the day, at least after THE MOMENT. 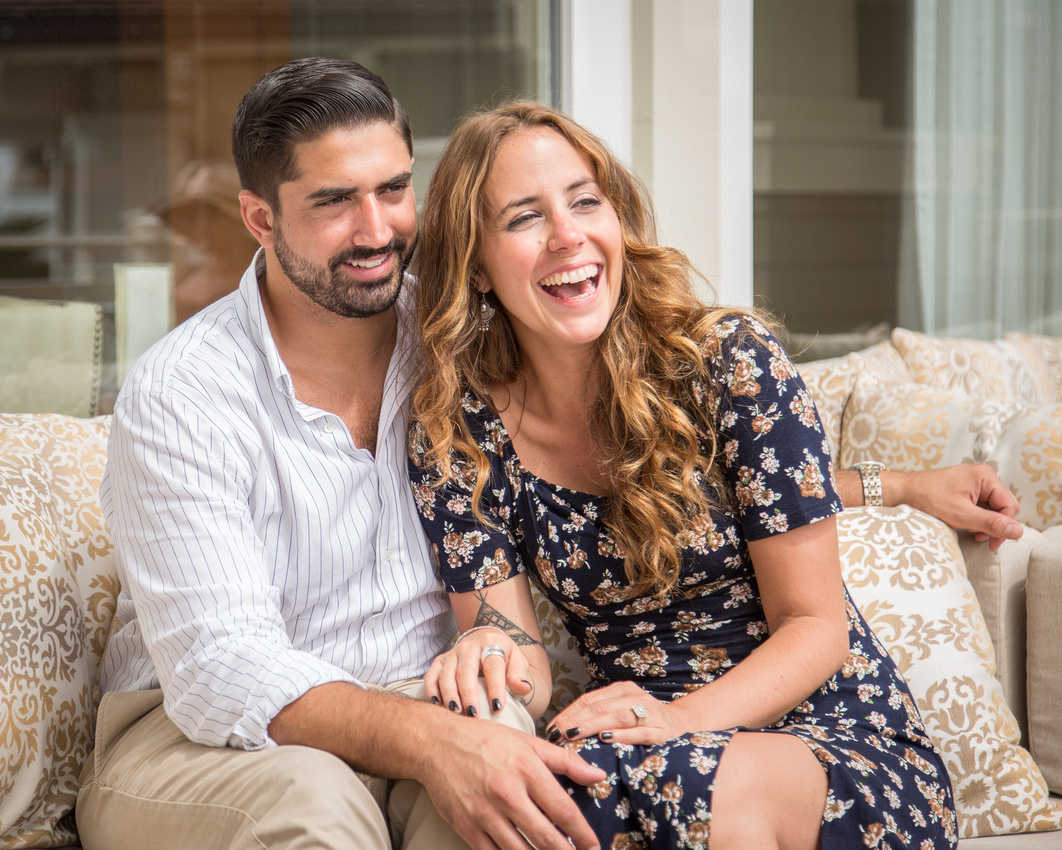 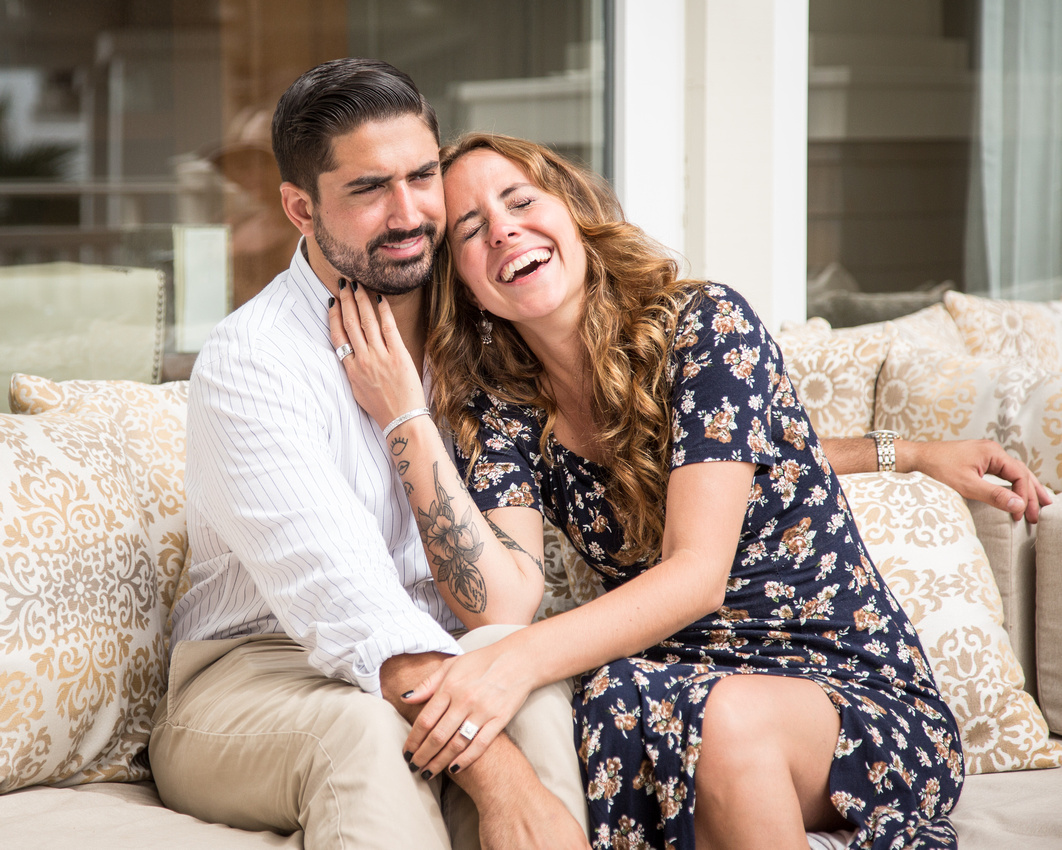 At that point, it was time for me to go, and probably bail out my car.  A couple of final shots of Meredith calling her family and friends on the east coast to let them know of her engagement, and we parted. 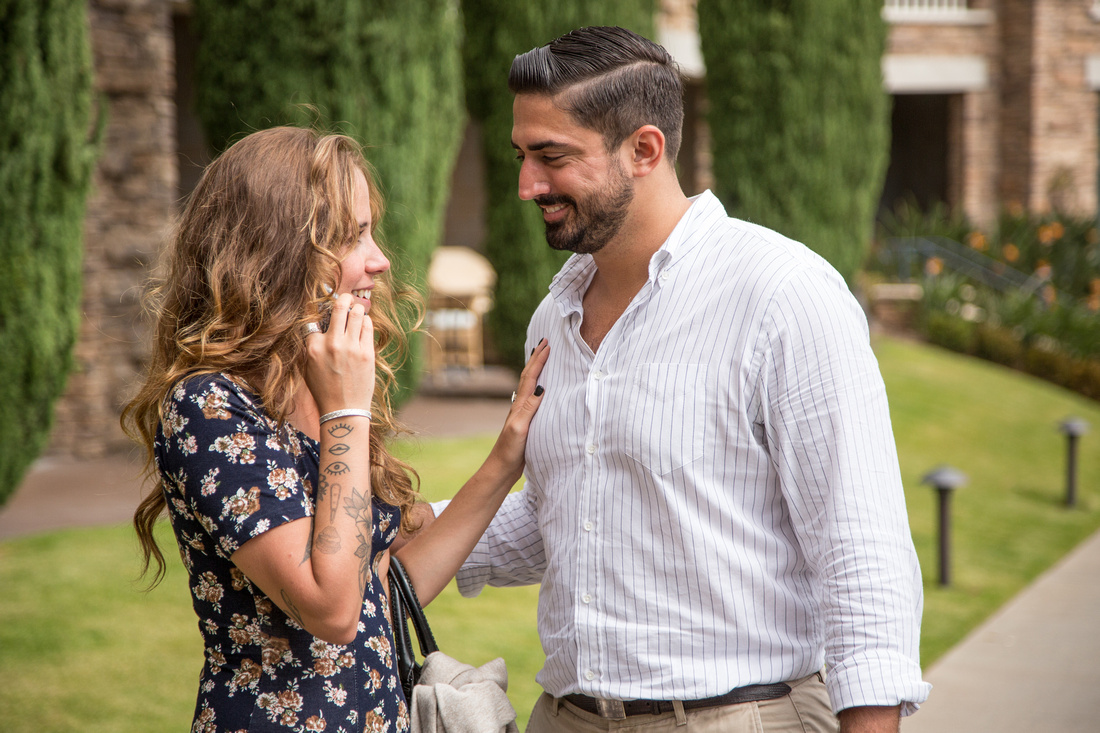 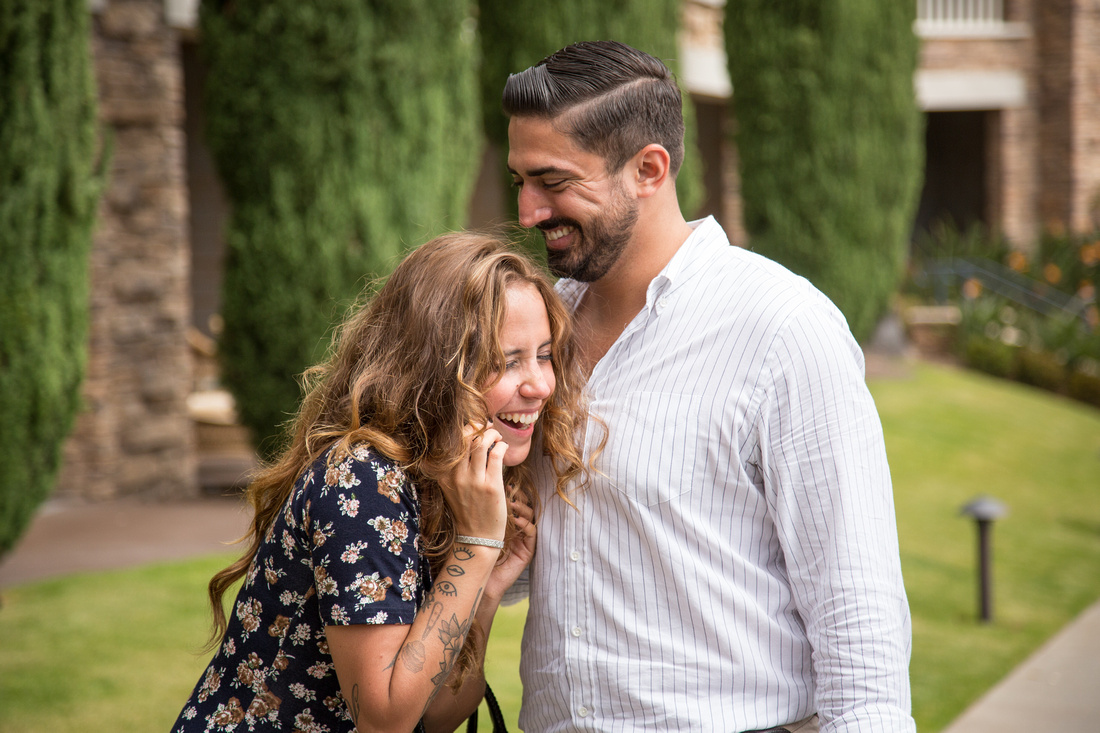 I went back to my car, expecting the worst, and found to my amazement that I had dodged the bullet, and not received a ticket.  I knew I had some great photos, and my stress level was replaced with a feeling of joy at having the opportunity to photograph two people deeply in love, two really nice people I wish I could remain friends with (they live in New York).  When i got home, I looked at Facebook, and found that Nick had posted an iPhone pic that I had taken so he could get the news out on social media.  It was a great photo, especially since I am in no way comfortable with phone pics, and his post had received almost 700 likes by the time I got home.

My fear of weddings has not diminished one bit.  But on this particular day, my fear was overcome by careful planning and familiarity with my equipment, enabling me to concentrate on my clients and their special day.  It was, altogether, one of the best days of photography ever.