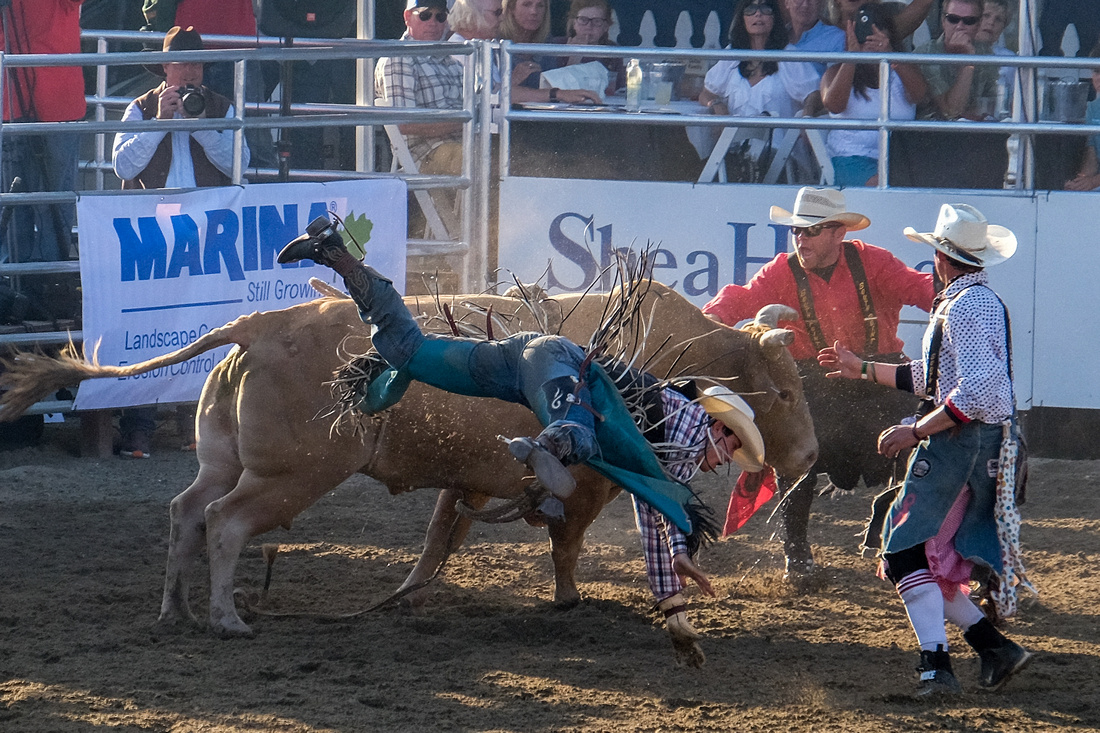 But the development is a totally different story from the Rodeo.  The rodeo is staged by Cotton Rosser and the Flying U Rodeo Company.  As he says in his message to the attendees in the program, "I love people, I love horses, I love rodeo, I love showmanship and I love my country!"  And he certainly does.  So it's a perfect match for South Orange County. 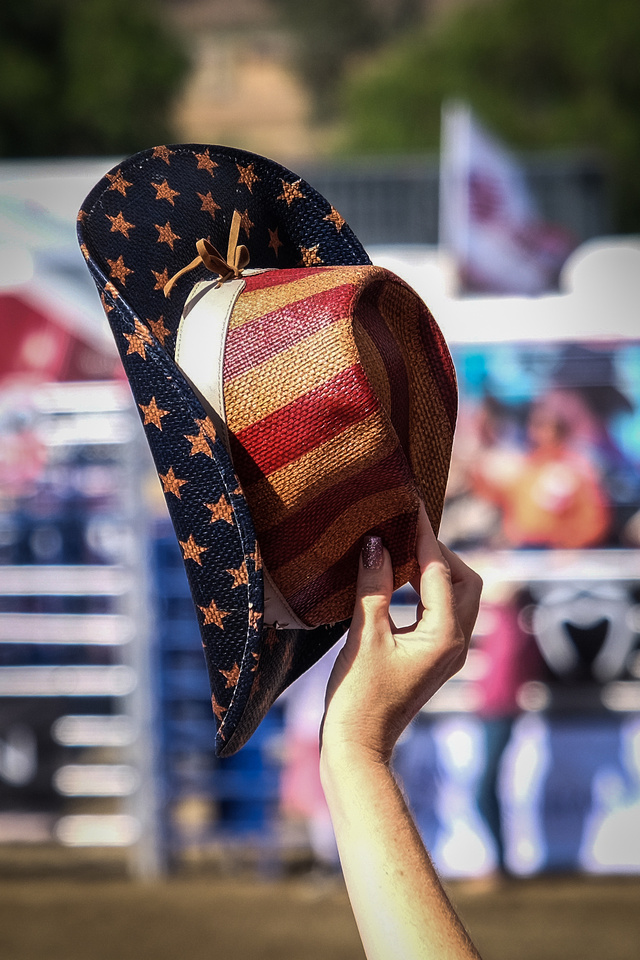 My original intent was to cover the whole day, focusing on the people.  I knew there would be real cowboys and cowgirls, plus an assortment of families, vendors, musicians, and best of all, Orange County poseurs - folks who wouldn't know one end of a horse from another, but could rock a hat, $500 boots, shades, and a logo tee.  They were all over the place.  But that was the problem. My thought going in was to shoot the event street-style.  But it quickly got way too crowded to do that stuff. Plus, nearly everybody was two-fisting beers, and I didn't want to invade anyone's space, especially under those circumstances, if you get my drift.

That plan went out the window as soon as we took our seats in the grandstand, about six or so rows up.  I hoped to grab a seat that would enable me to move down to the front of the grandstand easily and get some action shots.  I had shot the rodeo several years ago, going to the event alone, and working my way around the arena where I could to get decent angles without a press pass.  I shot that rodeo with my trusty Canon gear, and got some good takeaways.  But because of my now-aborted plan to shoot the event as an exercise in street photography, I had my Fuji gear, and a perch not close enough to get in tight. And I didn't want to stand in front of others in their seats and block their views.  So I'd have to settle for obstructed views and mostly fairly aggressive crops after the fact.  Thankfully, my Fuji X-T1, not known as an "action" camera, performed remarkably well.

The rodeo started with what you might expect, an exhibition of trick riding by four really talented ladies, who stood upright on the saddle and did other tricks you may have seen before, like this: 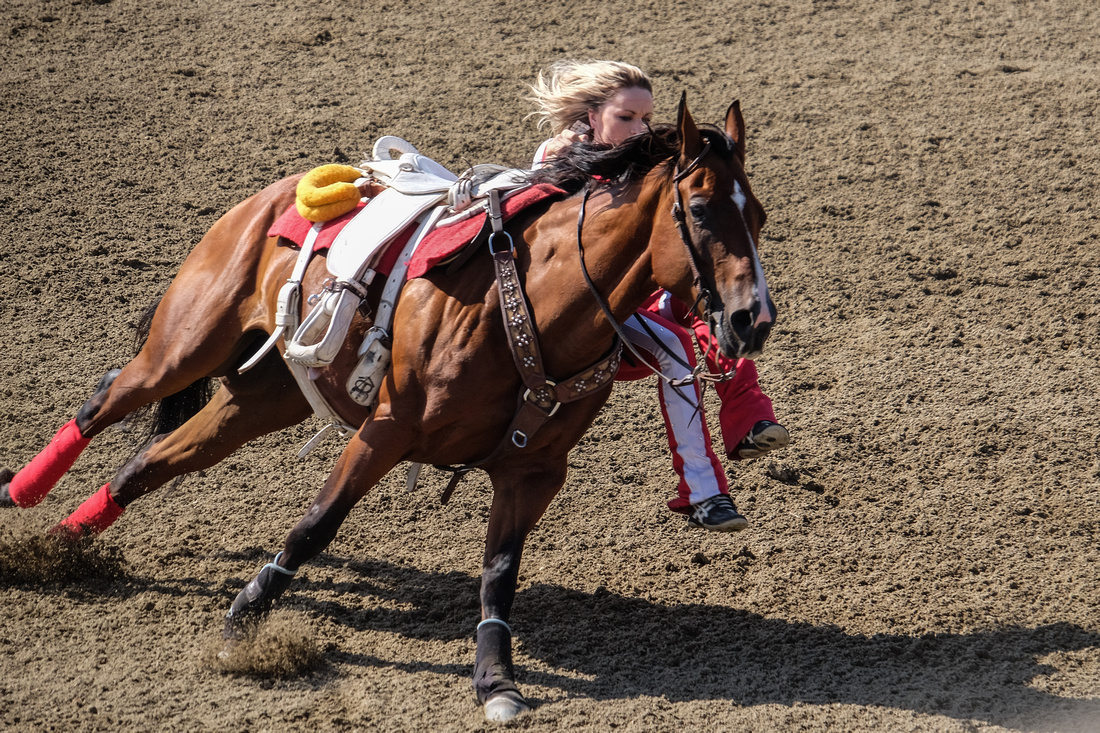 But I was totally unprepared for this action, a girl who upended herself and dragged her hair through the dirt, her face inches above the ground.  I have no idea what prompted her to think of this cowgirl version of the Zamboni.  Fortunately, she did it successfully, and emerged with nothing but dirty hair. 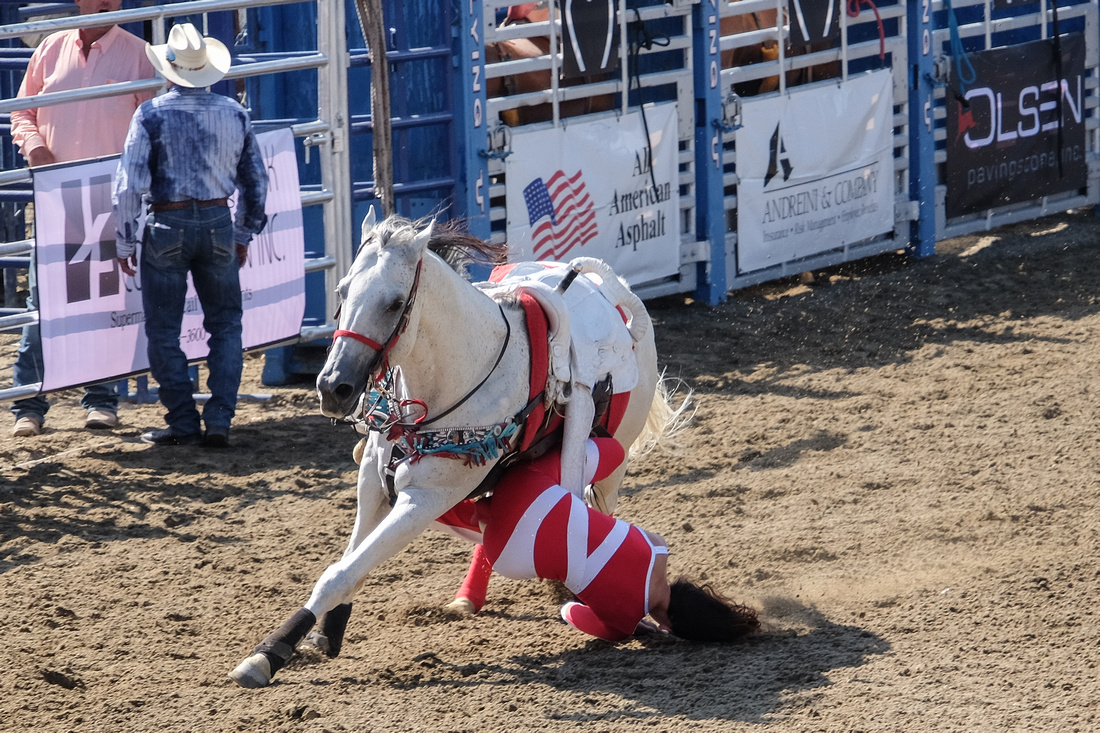 When I looked at this in-camera, I thought maybe I could get some decent action shots with the X-T1.  And I did.  I began doing single frame captures.  I still believe that the Fuji has a delay that makes action shots something of a crapshoot.  But when the action is non-stop, it's a pretty safe bet that you're going to get something good.  For the saddle bronc event, I wanted to capture the horses at their peak of extension, tails, chaps and legs flying, and cowboys hanging on for dear life. 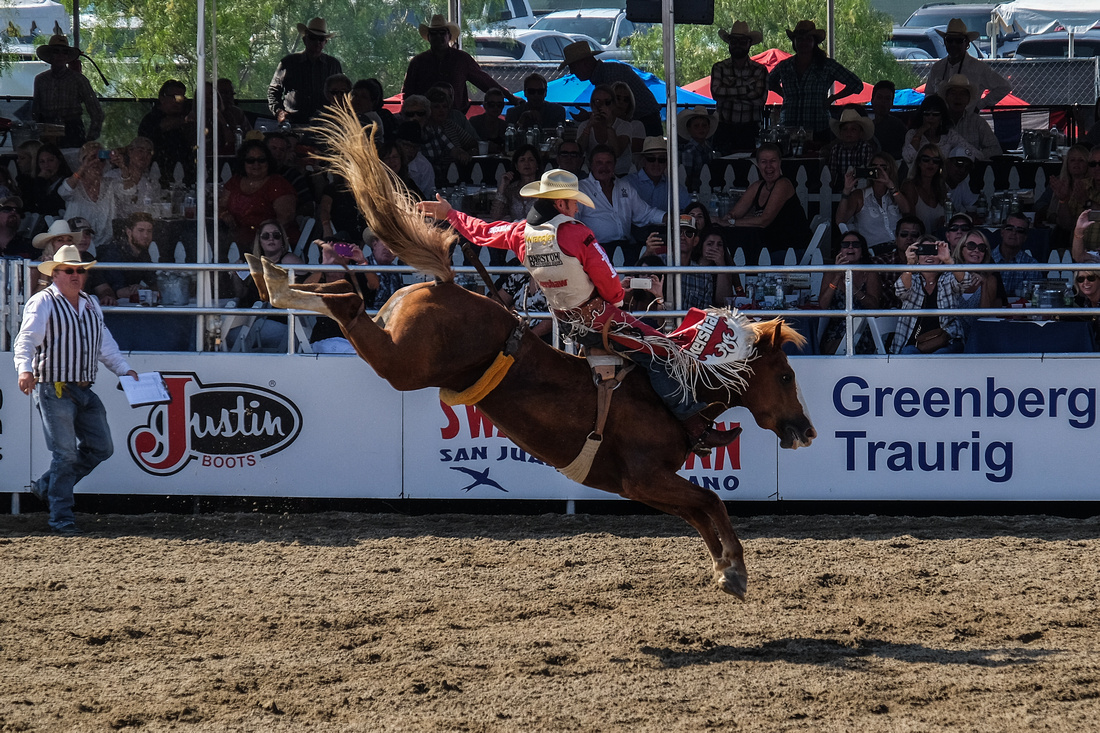 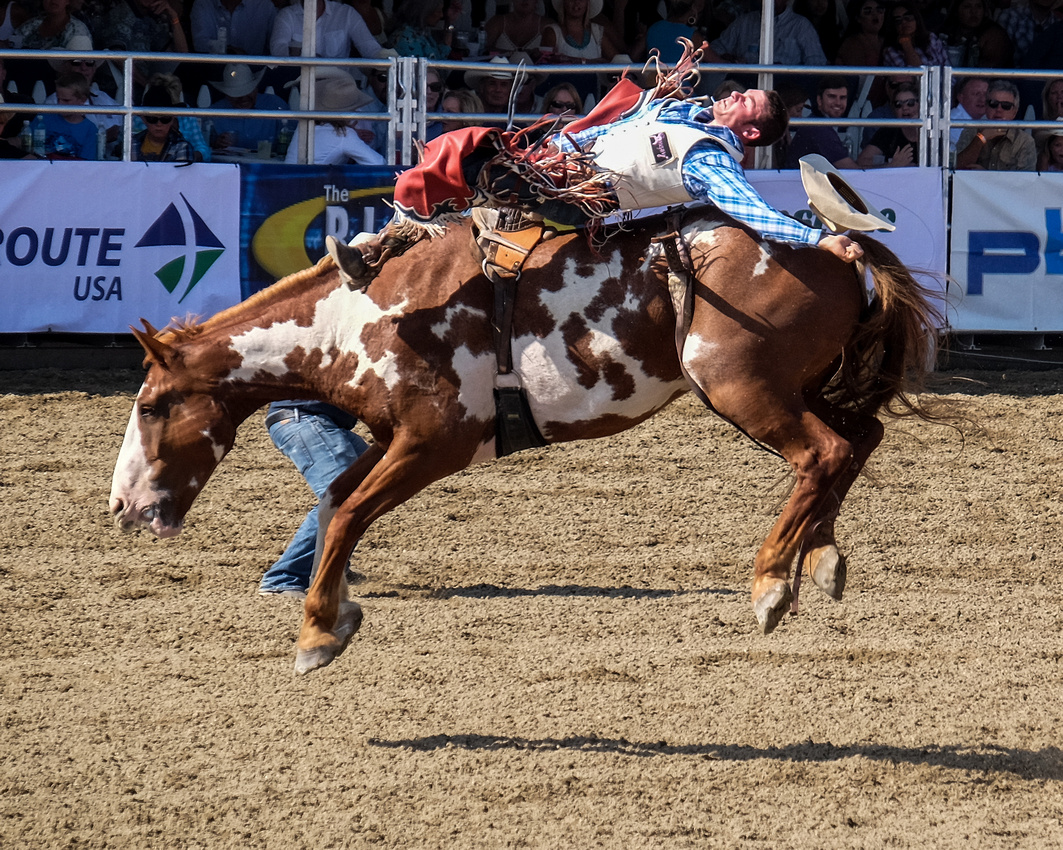 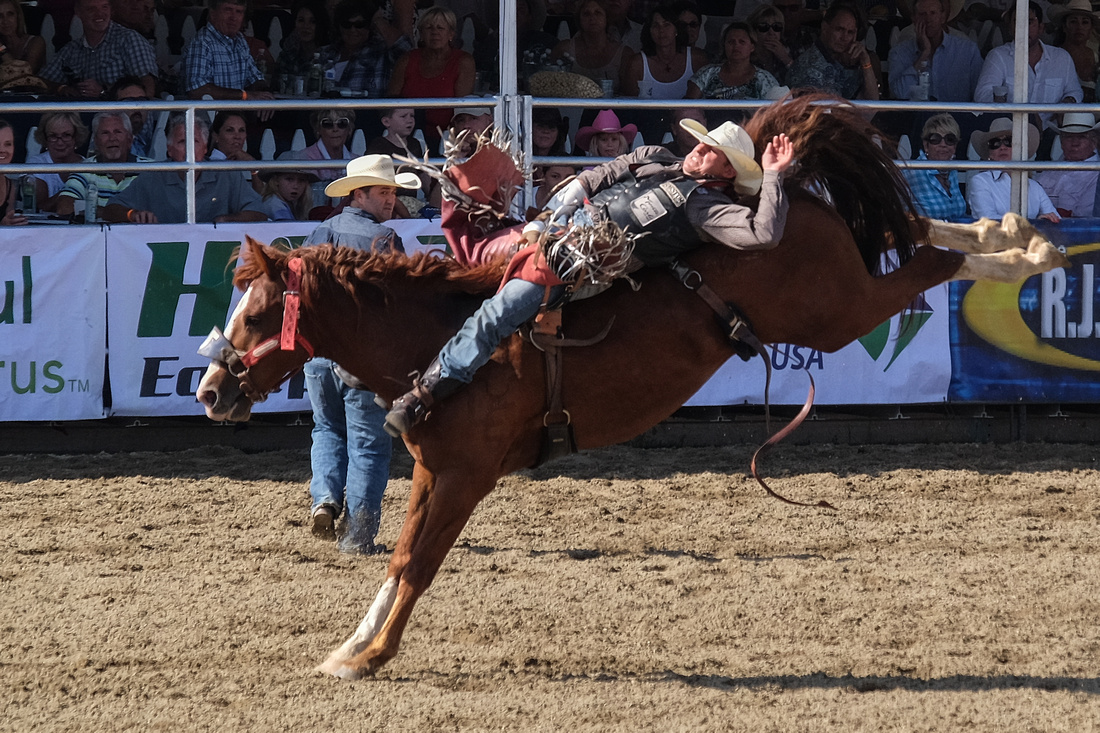 For the roping and steer-wrestling events, I wanted to capture the teamwork between the riders and their horses. 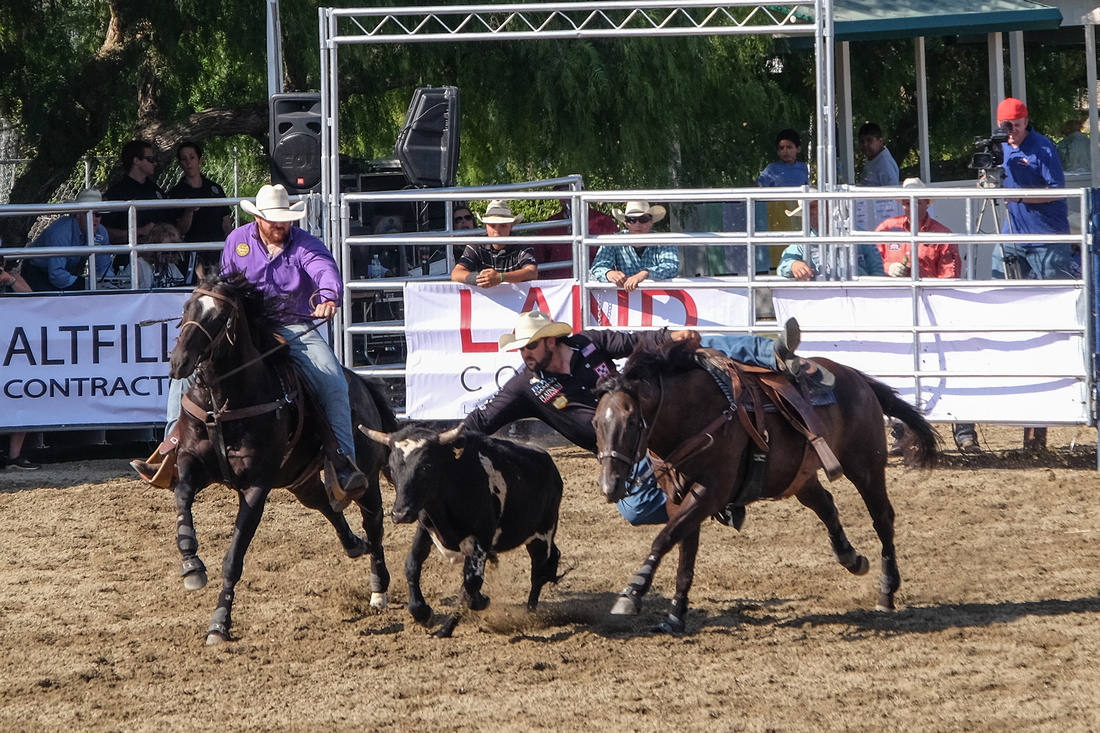 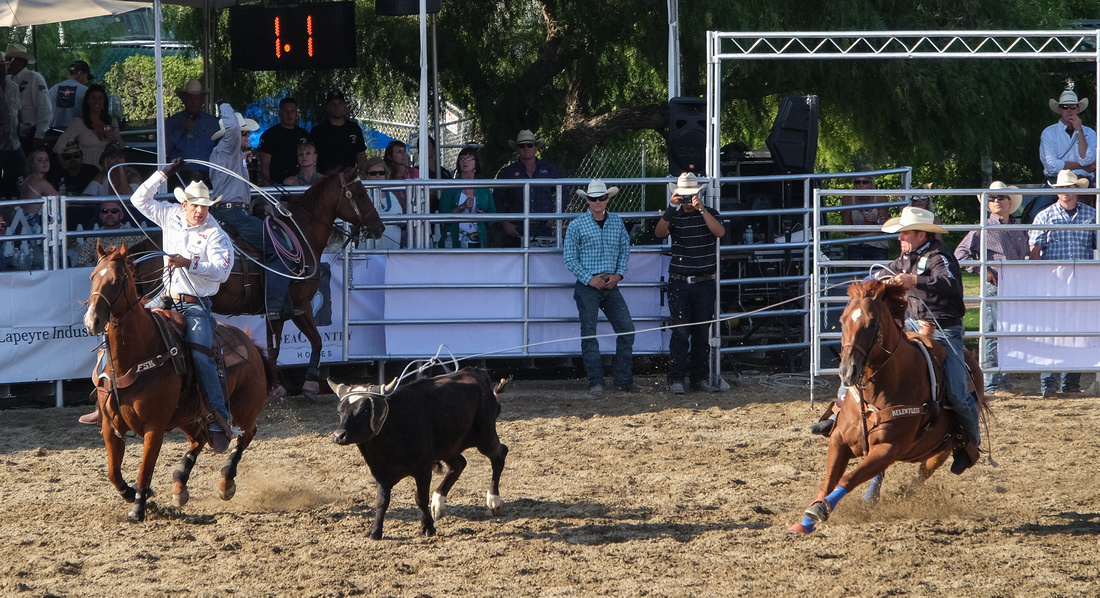 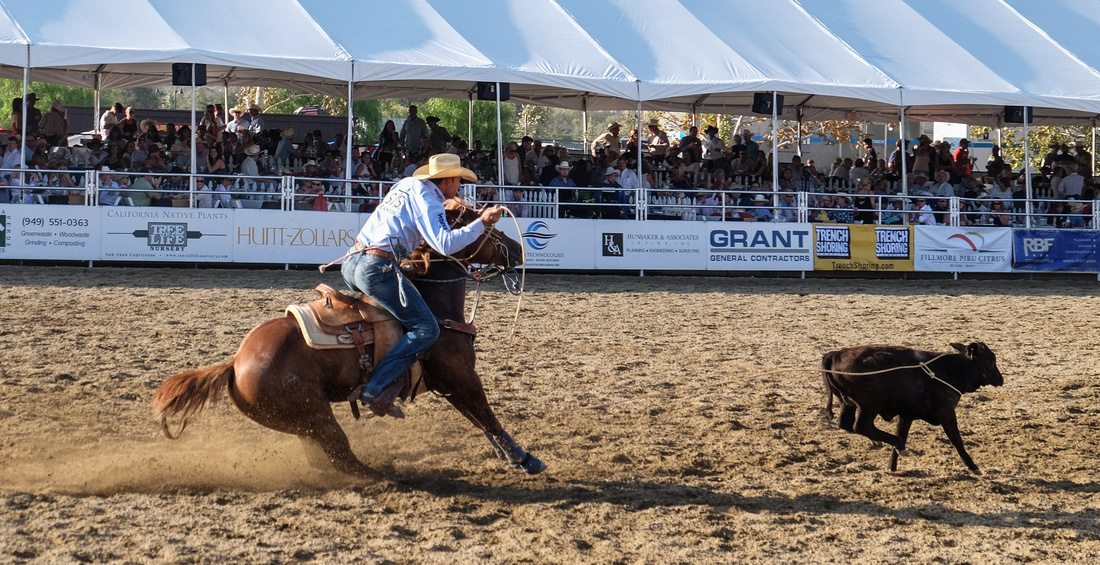 I especially like the horse slamming on the rear brakes.  Sometimes the steer got the best of the cowboy. 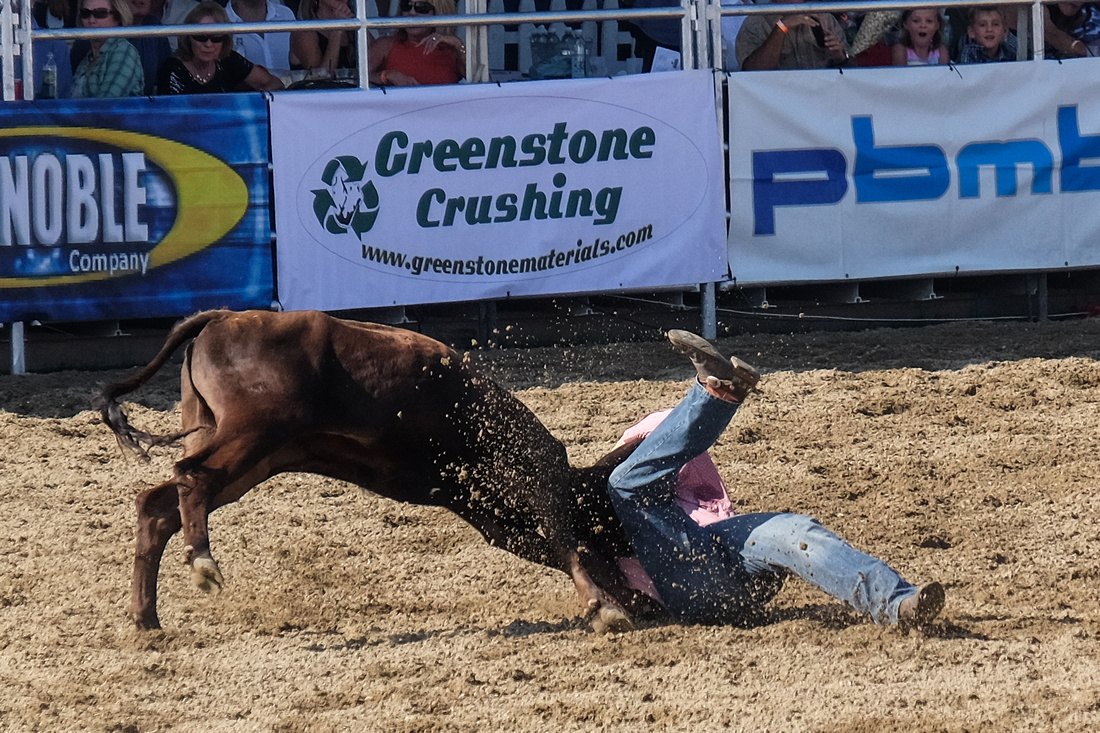 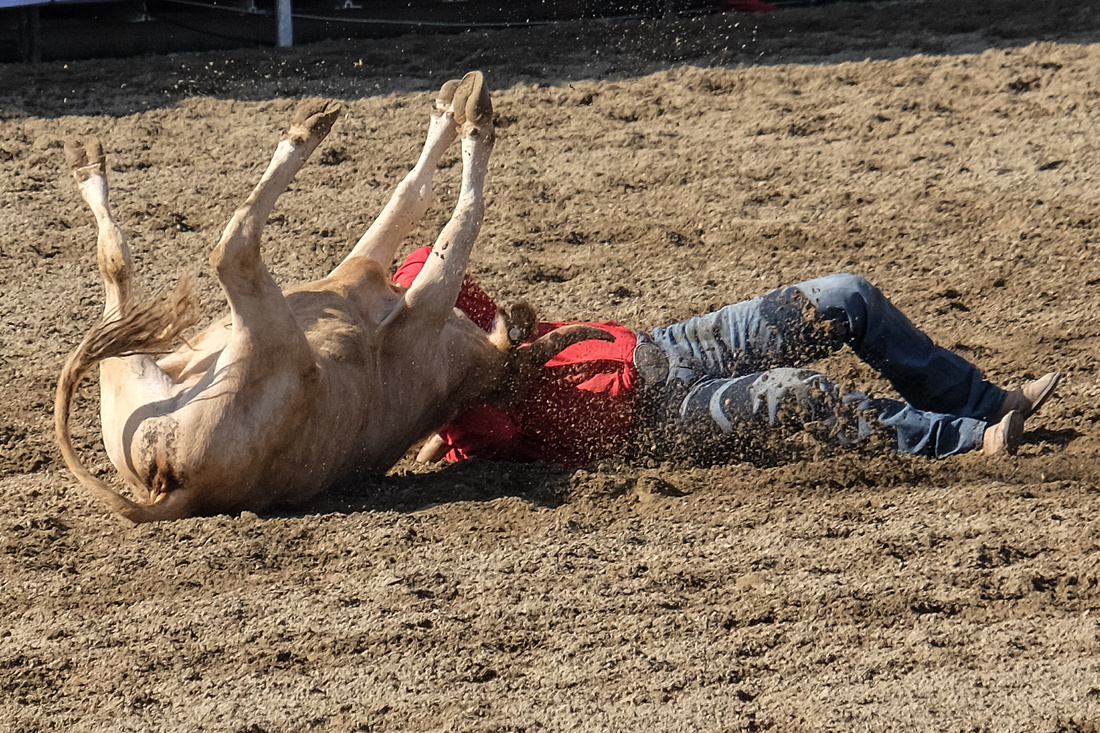 These were all single frame captures.  But when it comes to bull riding, the action is so quick and so violent, there's no shame in shooting a burst.  Most rides (launches?) are over before the Fuji's buffer fills up, so you can capture the whole thing.  And for me, while watching the action live, or on video after the ride, is thrilling, I think the frozen moment of a still photograph captures the danger and excitement better than any other way of seeing.  You see the cowboy in a precarious position, some with helmets and some without; you see the bull snot flying; you see the cowboys on the fence and the rodeo clowns doing their thing to protect the rider.  To me, these are compelling images, even if they're not made from inside the arena with a 400mm bazooka at f/2.8. 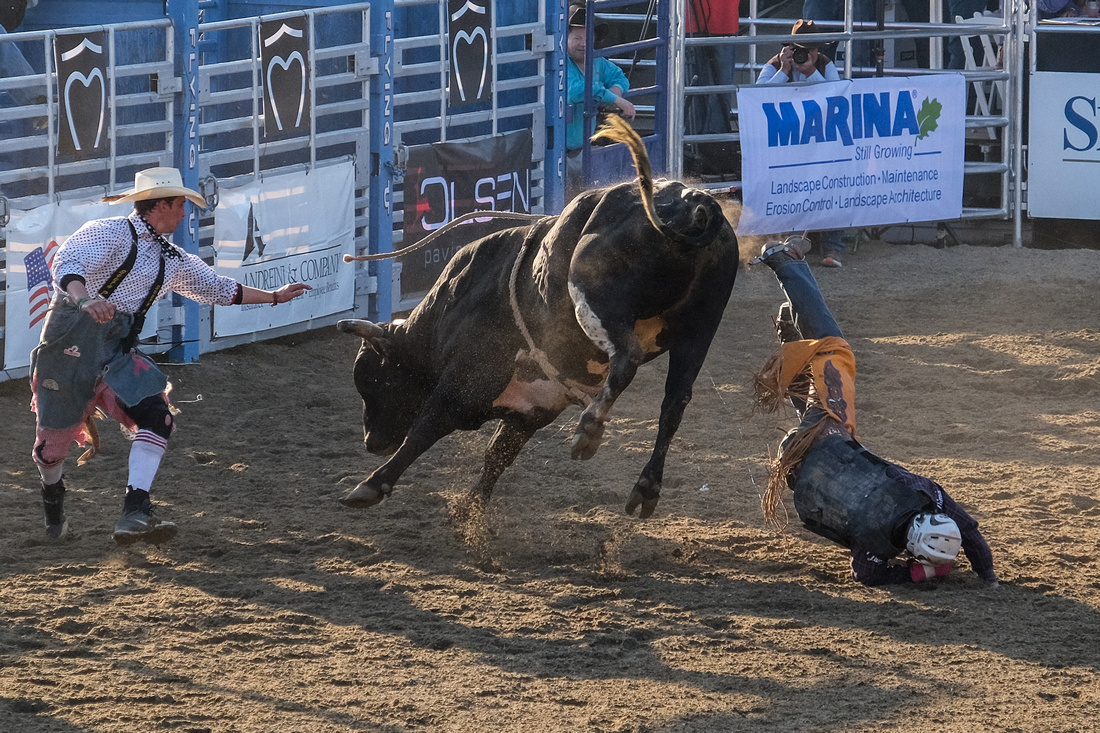 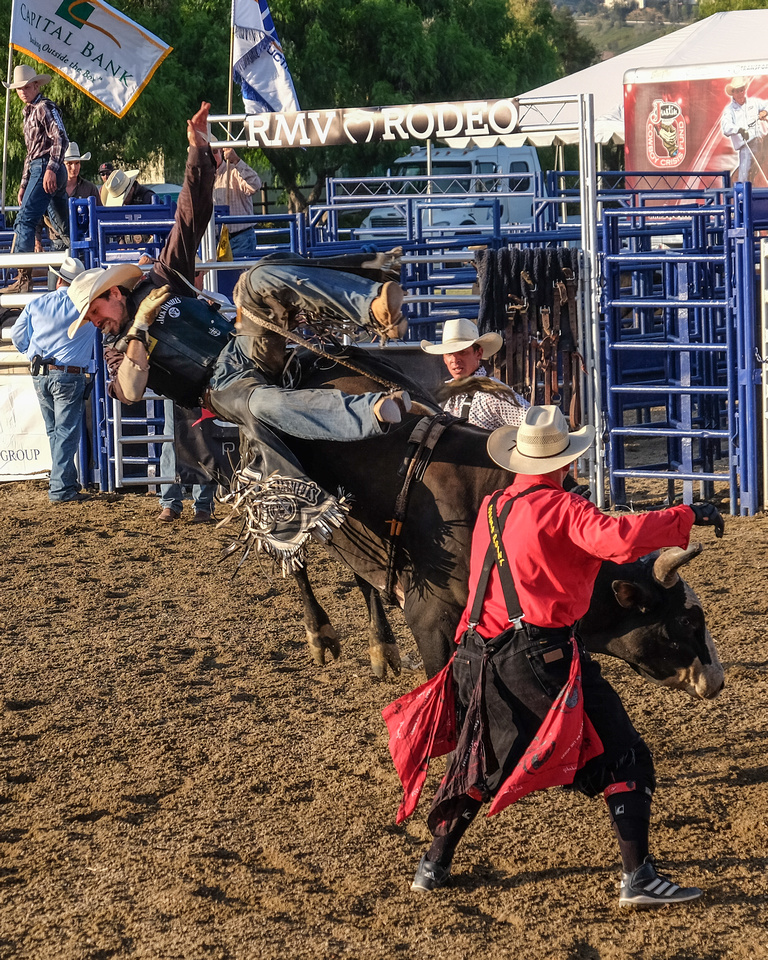 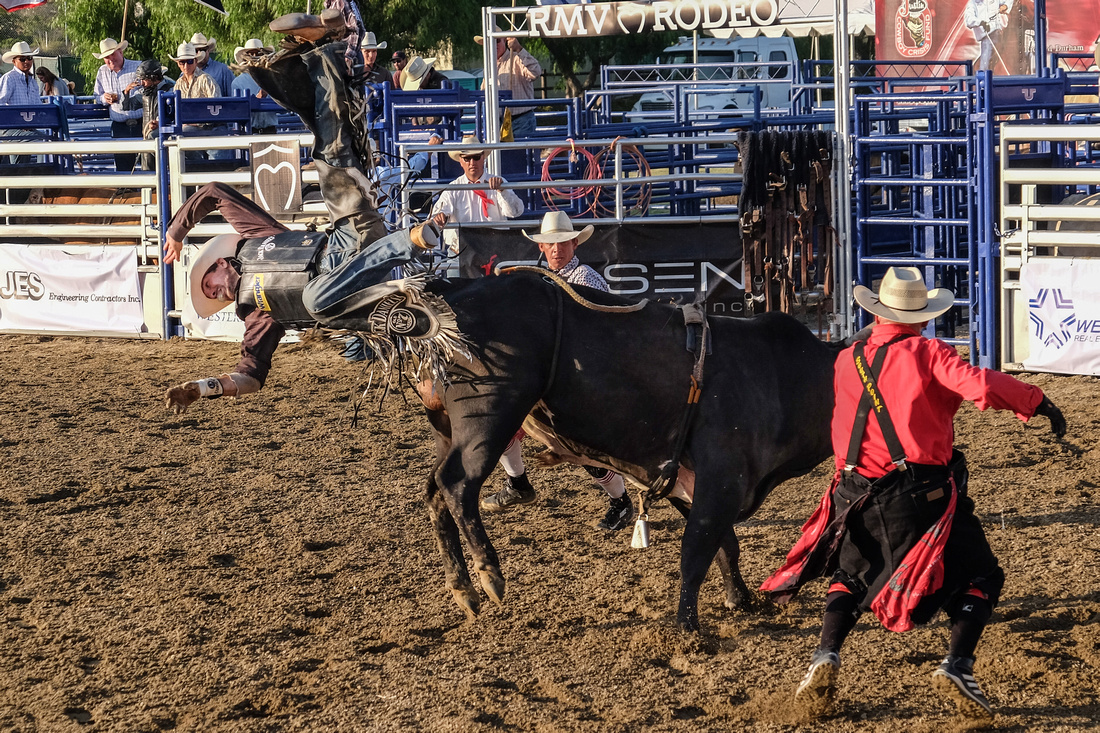 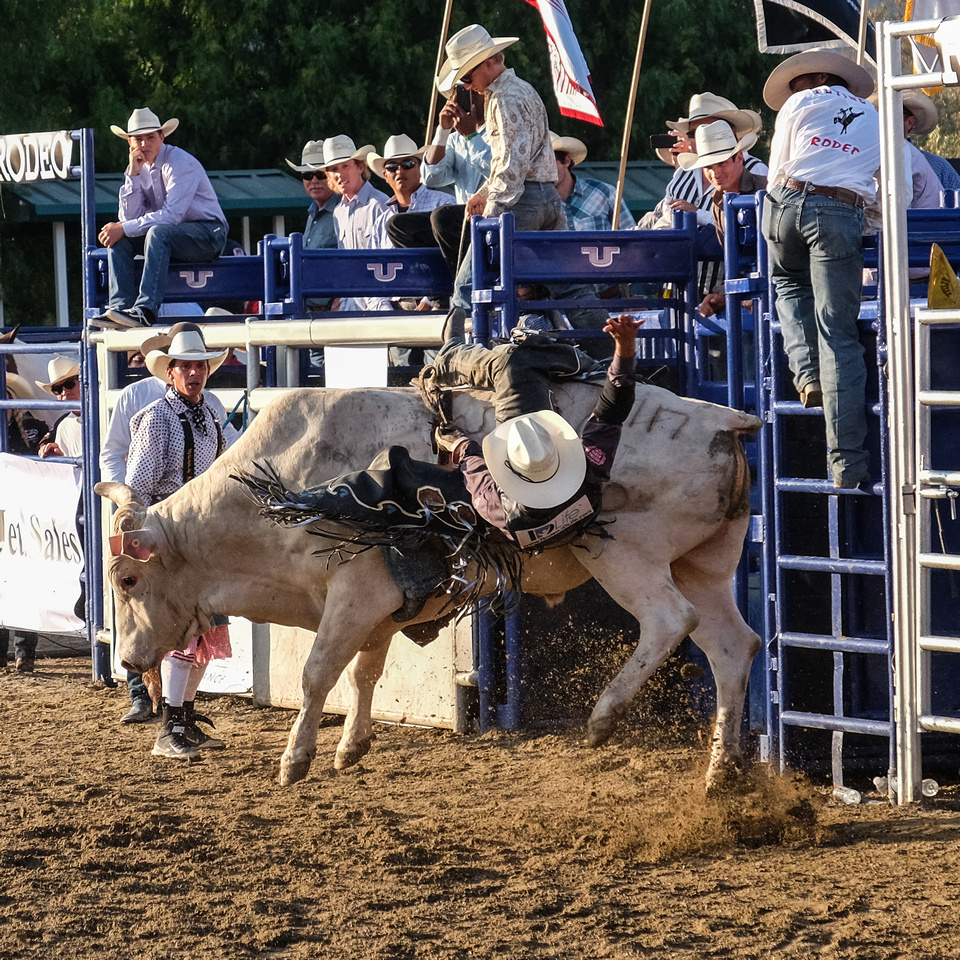 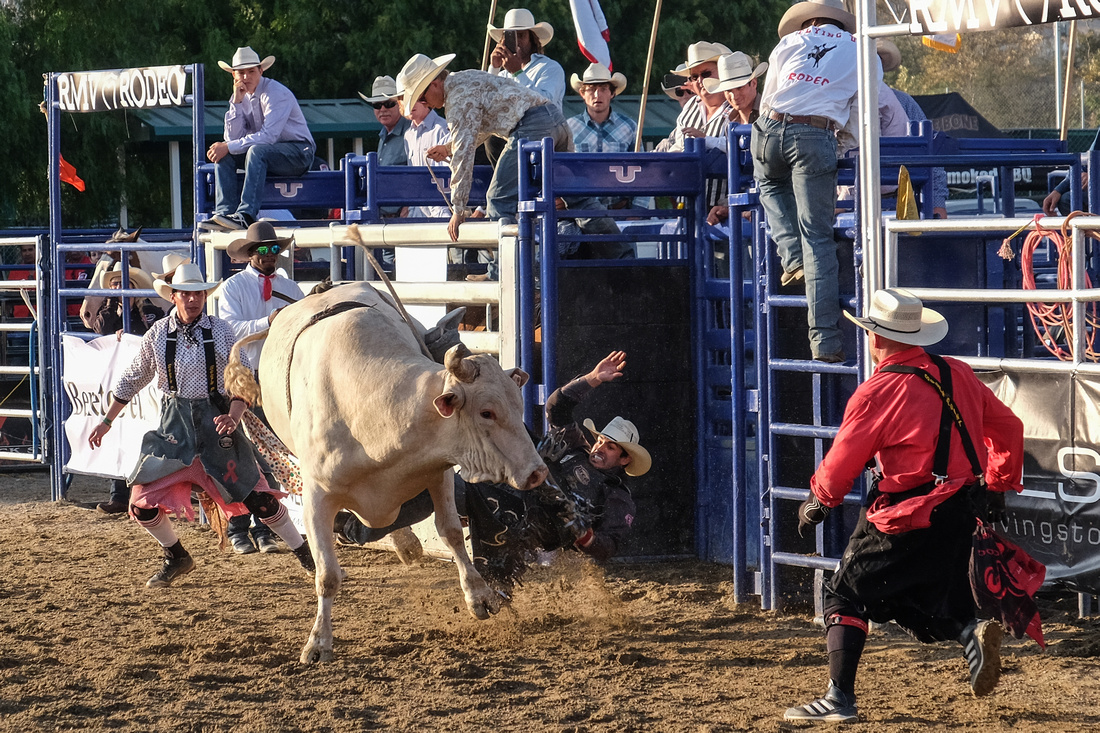 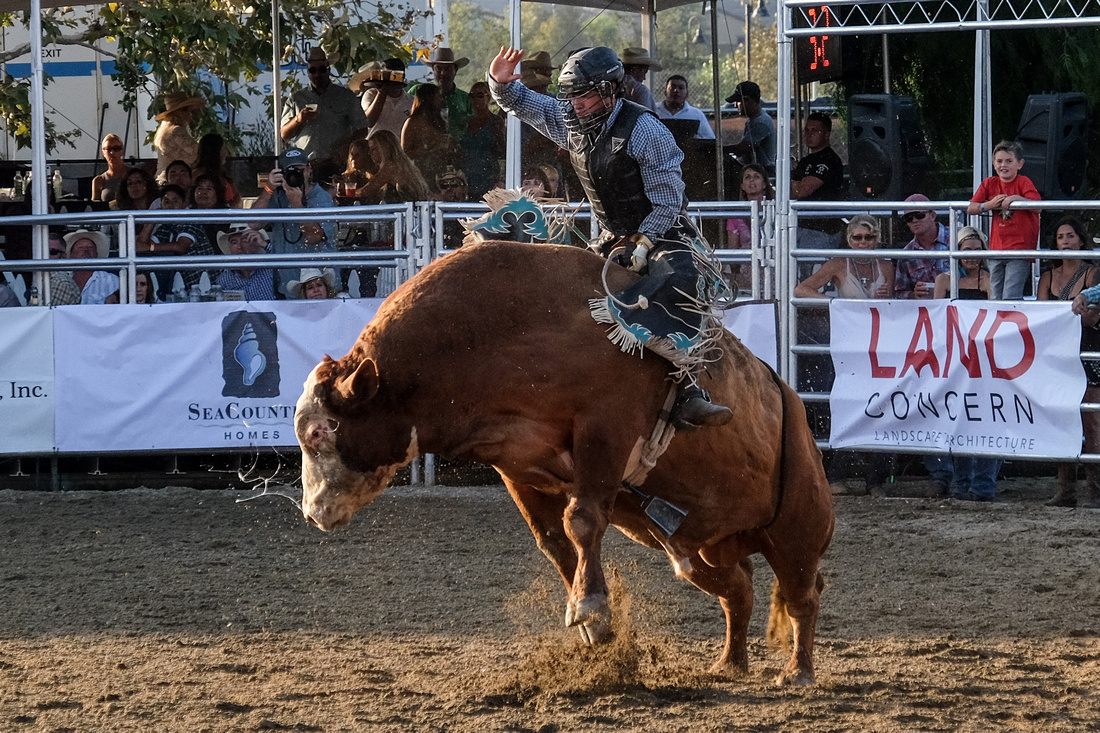 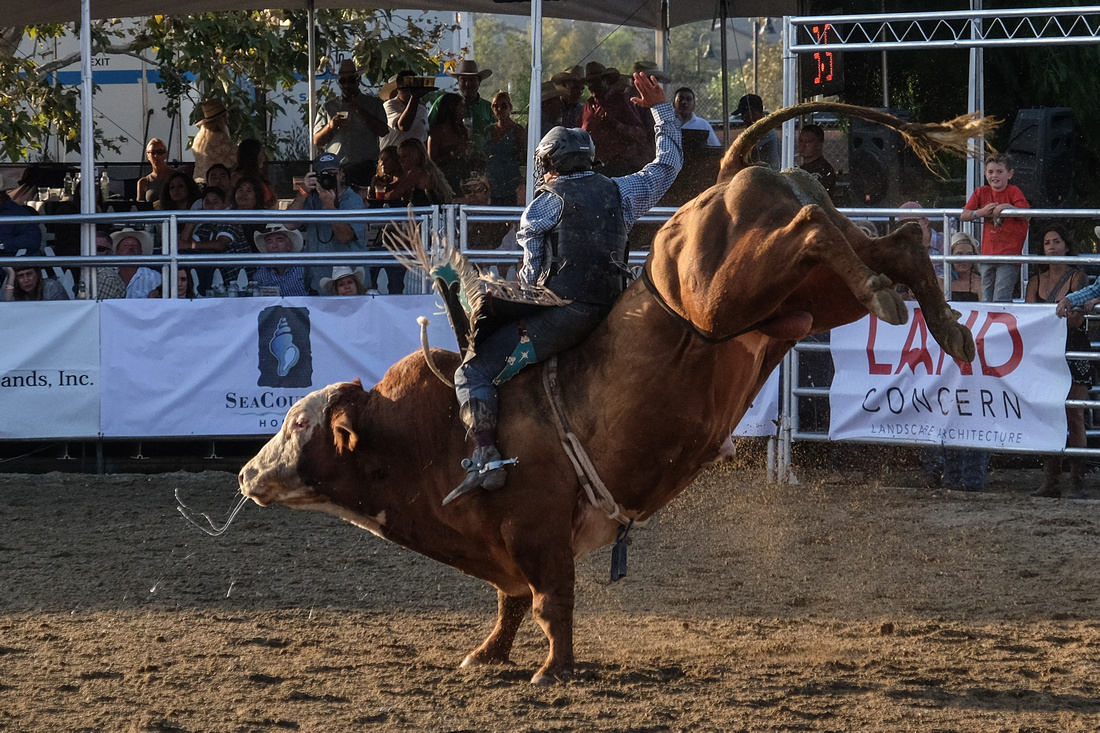 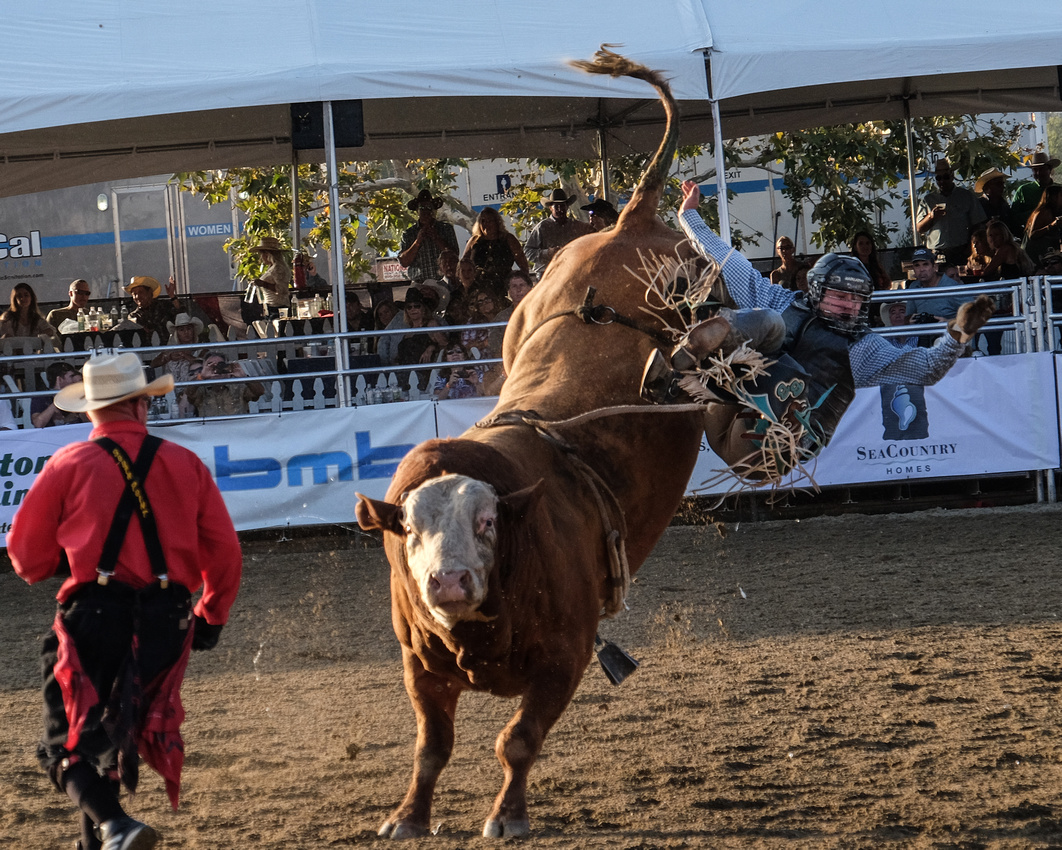 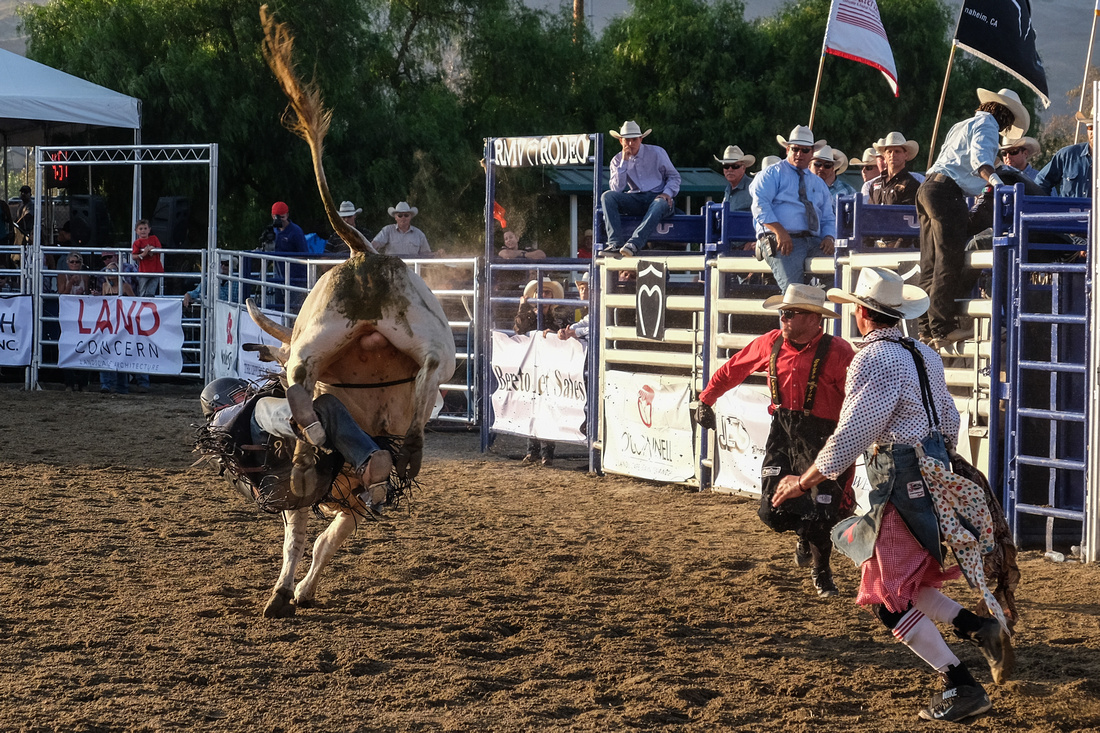 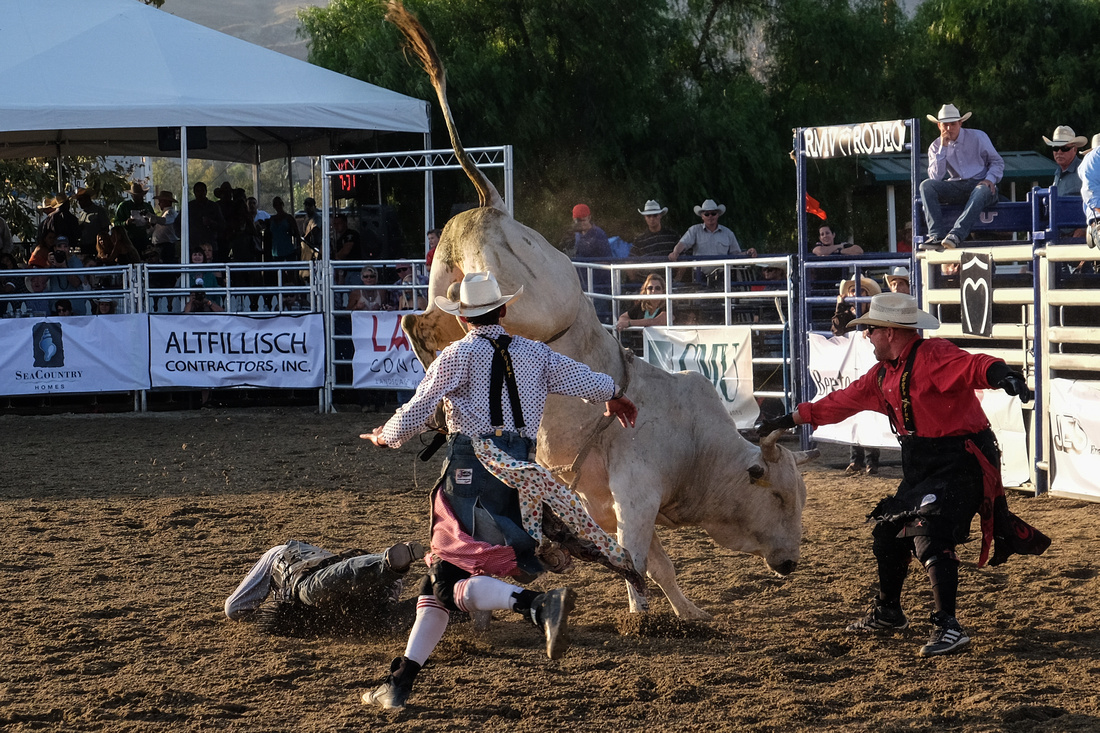 It was a fun day, followed by dinner at Lucy's El Patio cafe, down in Capo Beach, a hole in the wall Mexican joint that has been there since the 1930's.  A perfect ending to a fun and rewarding day.