Shooting from the Cheap Seats

Wow, it's been almost a year since my last blog post.  Chalk that up to being way too busy with things that are rewarding on many levels, but maybe not exactly portfolio-quality work.

Last week, I had the privilege of photographing the LA-based CONTRA-TIEMPO dance company in rehearsal with their latest work entitled "SHE WHO: Frida, Mami & Me", inspired by the life and work of Mexican artist Frida Cahlo and Nigerian deity Mami Wata, to be performed at the Ford Theatre in the Hollywood hills.  These dancers, led by their creative and artistic director Ana Maria Alvarez, are extremely talented, and they're great people to work with as well.  My assignment was to shoot their rehearsal, as they would be the first performance, ahead of the Brooklyn-based company, Urban Bush Women.  UBW would perform their work "Walking with 'Trane", featuring the music of the legendary John Coltrane.  As the LA County Arts Commission, which operates the Ford Theatres, has a contracted photographer to shoot their productions, my role would be limited to shooting CONTRA-TIEMPO for their own publicity purposes, as well as for LA Arts.

Though I grew up and lived most of my life within about ten miles from the Ford Theatre, I hadn't been there in many, many years; so many that I barely remembered the place.  It's that small venue tucked away in a hollow on the east side of the 101 Freeway, on the other side of the Hollywood Bowl.  But it's a beautiful, 1200 seat amphitheater that is currently undergoing extensive renovation and improvement.  The performance area is a multi-level stage, with decorative hardscape and plants, behind which are the steep cliffs of the Hollywood Hills.  The audience experience is currently being improved by the addition of a large sound wall behind the seats, as the Ford performances are often overshadowed by the audience response at the nearby Hollywood Bowl.  Last night's dance performance was continually "augmented" by applause from the audience of Boy George and Culture Club.  I didn't know that Boy George was still a thing.

Because I wasn't going to shoot the actual performance, I decided to bring my little Fuji X100S, which hasn't gotten much love these days after I purchased my XPro2, and used it extensively in Italy this past spring.  But since "non-professional" photos are allowed (no flash) at the Ford, I thought I'd bring the X100S and see what might be possible.

The first thing you notice when you arrive at the Ford is the sheer verticality of the place. It's a steep hike from the small parking lot to the entrance, and from there up to the doors.  From the rear of the audience, here's your view back to the park-like area you just came through. 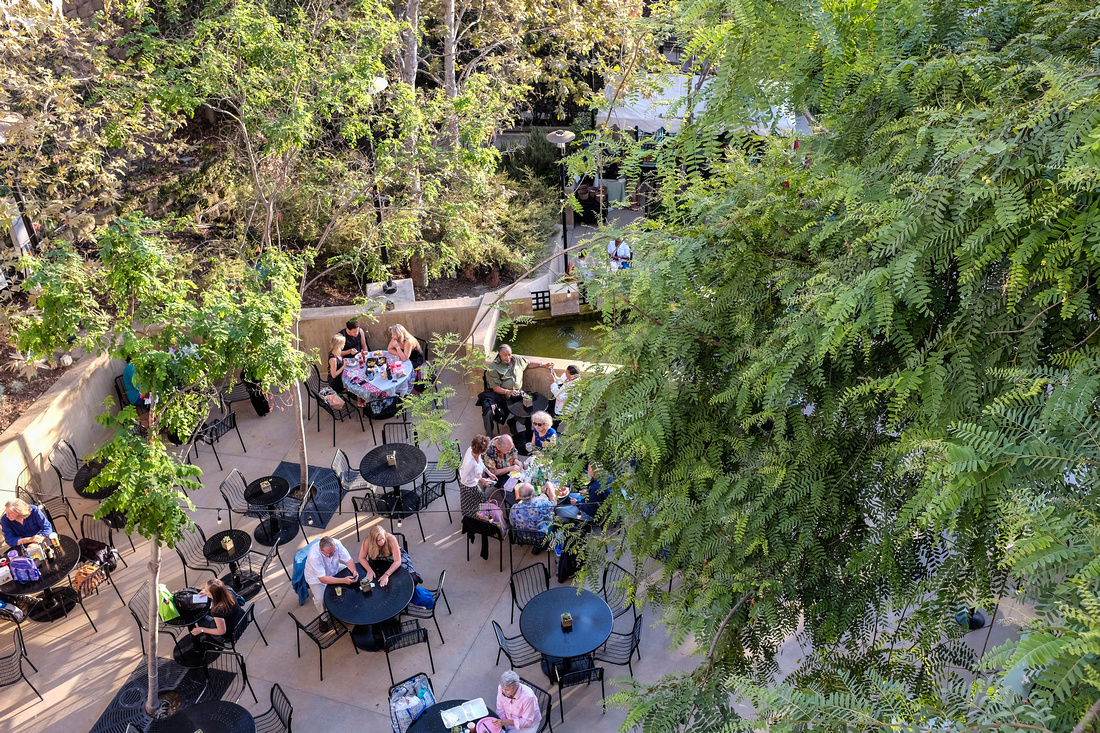 Once inside, because we were so early, I had an opportunity to reconnect with the CONTRA-TIEMPO dancers as they warmed up. 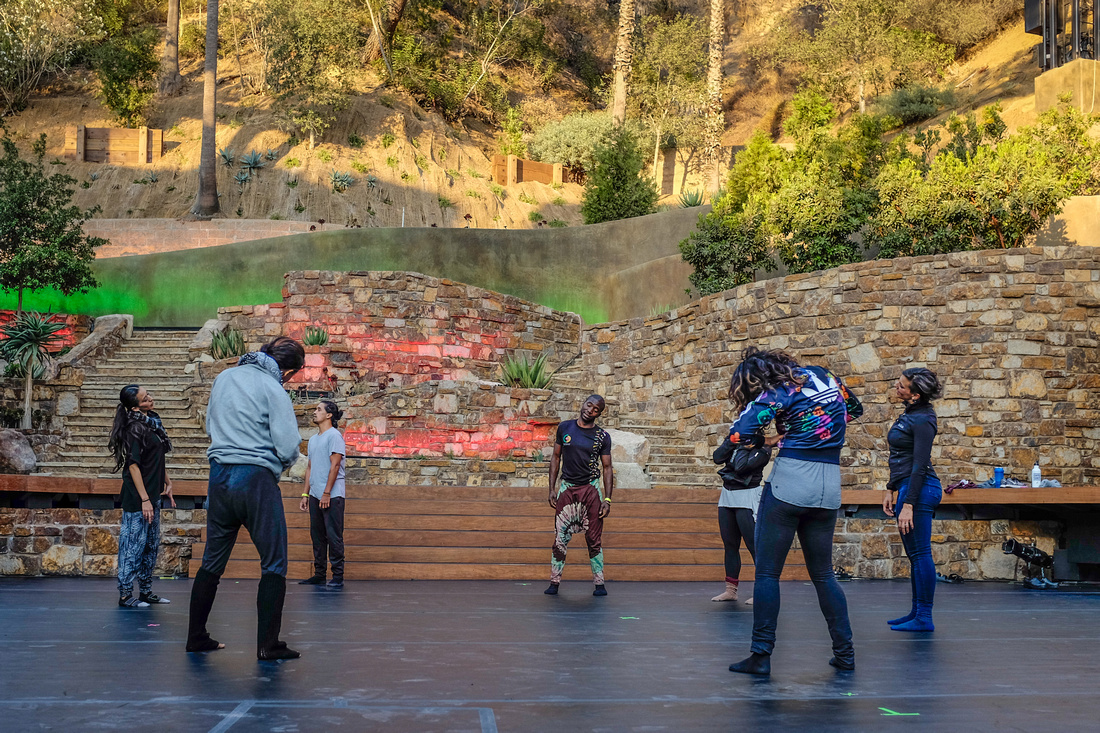 As the sun dropped behind the Hollywood Hills to the west, we began to see how the natural environment and the design of the stage area would combine to become a great performance space. 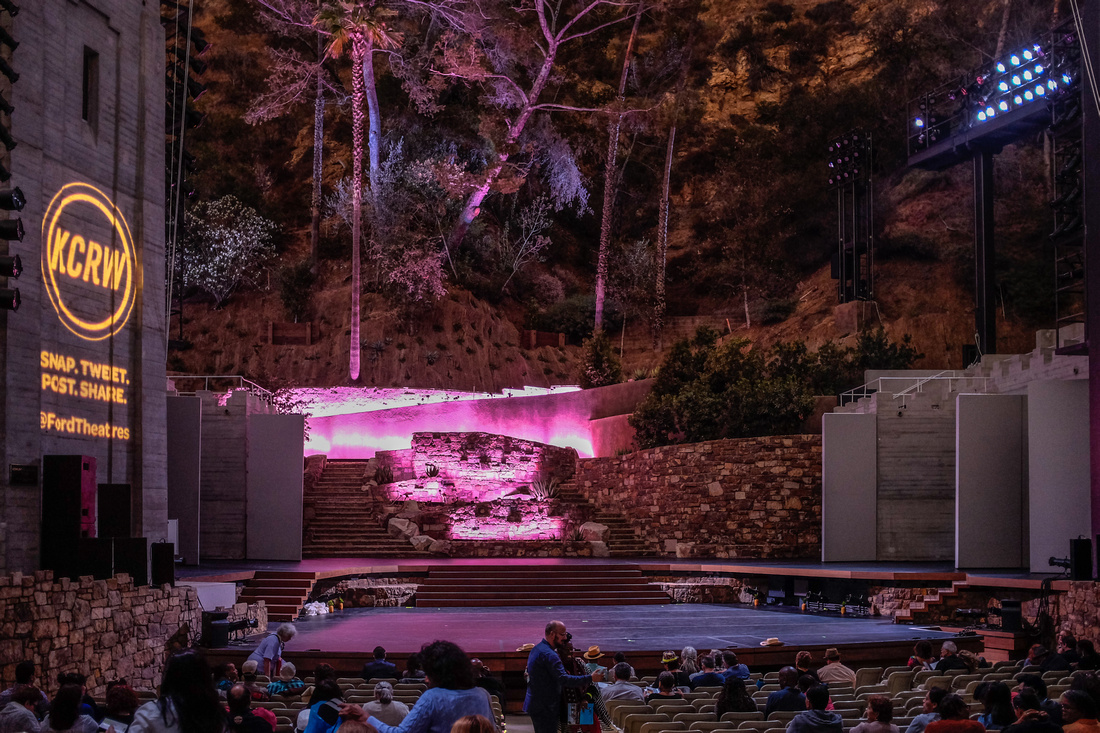 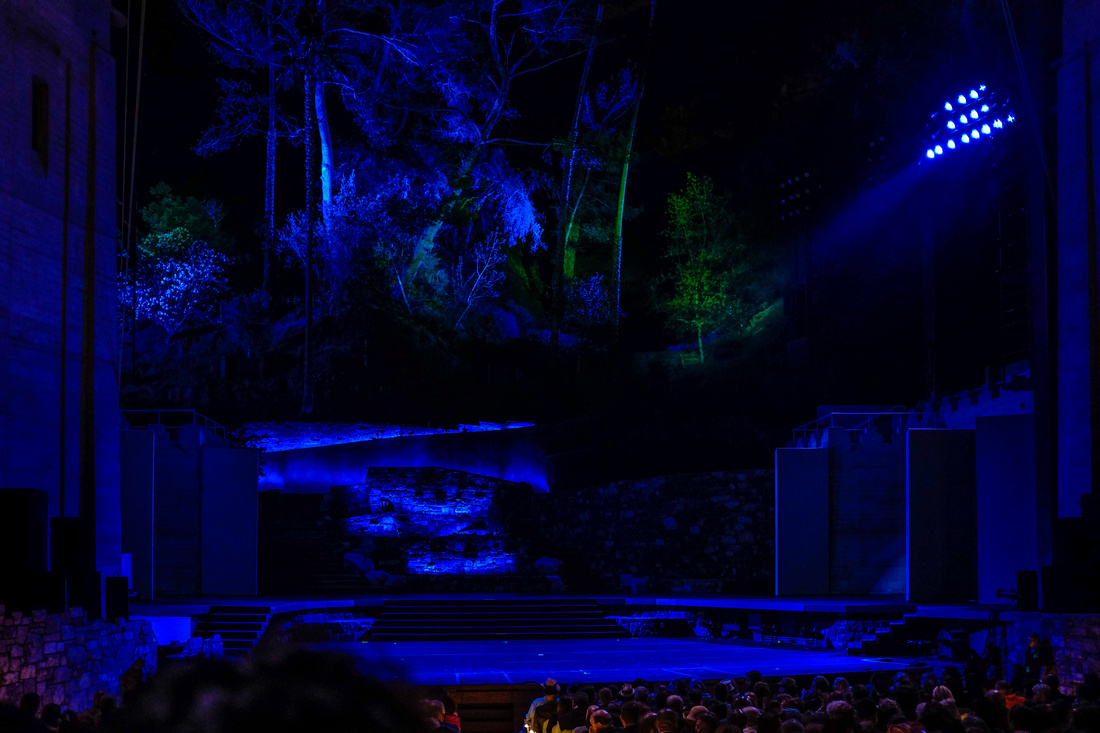 It was difficult at first to watch a dance performance without shooting it.  I saw the contracted photographer at work, sometimes wondering whether she was getting anything at all under the subdued lighting at play during parts of the performance.  But as the stage darkened, both CONTRA-TIEMPO and UBW employed projected images on the back area of the stage, meaning the hardscape, landscape, and natural cliffs.  It was an amazing use of this space.  I figured I'd try the X100S and see what its fixed 23mm lens would give me from Row M, probably 100 feet from the stage.  No zoom, no ability to move from my seat, expose for the highlights and hope for the best.

What turned out to be the optimal exposure for this distance and view?  Amazingly, I was at 2500 ISO, f/2.0 and 1/60 or 1/125 second.  That's way, way too slow to stop the motion of dancers.  Way too slow, that is, unless they occupy such a tiny portion of the frame.  Under those conditions, a dancer's movement that would translate to noticeable subject motion in a "normal" frame barely registers from such a distance.  The biggest problem I encountered was the camera's difficulty in achieving quick focus from so far away, with the subjects so small in the frame.  Nevertheless, I was surprised at what I was able to capture.  Post processing consisted of nothing more than "auto" straightening of vertical and horizontal edges in Lightroom, plus a bit of clarity, vibrance, and in some cases, shadow boost. 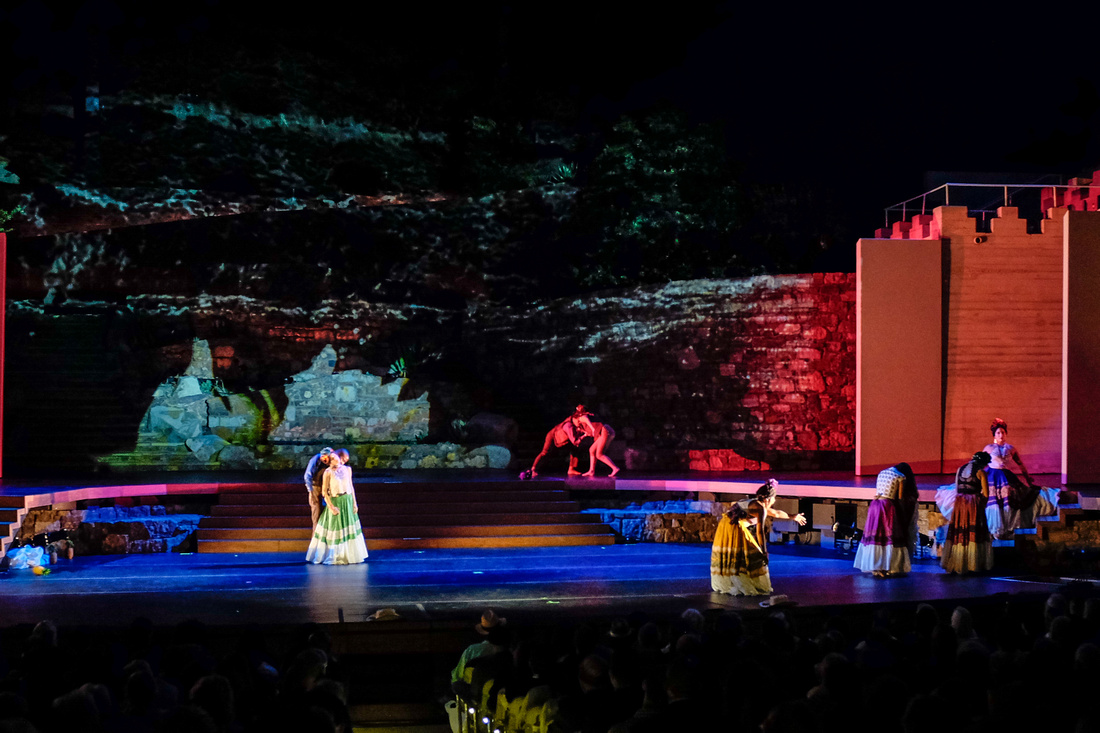 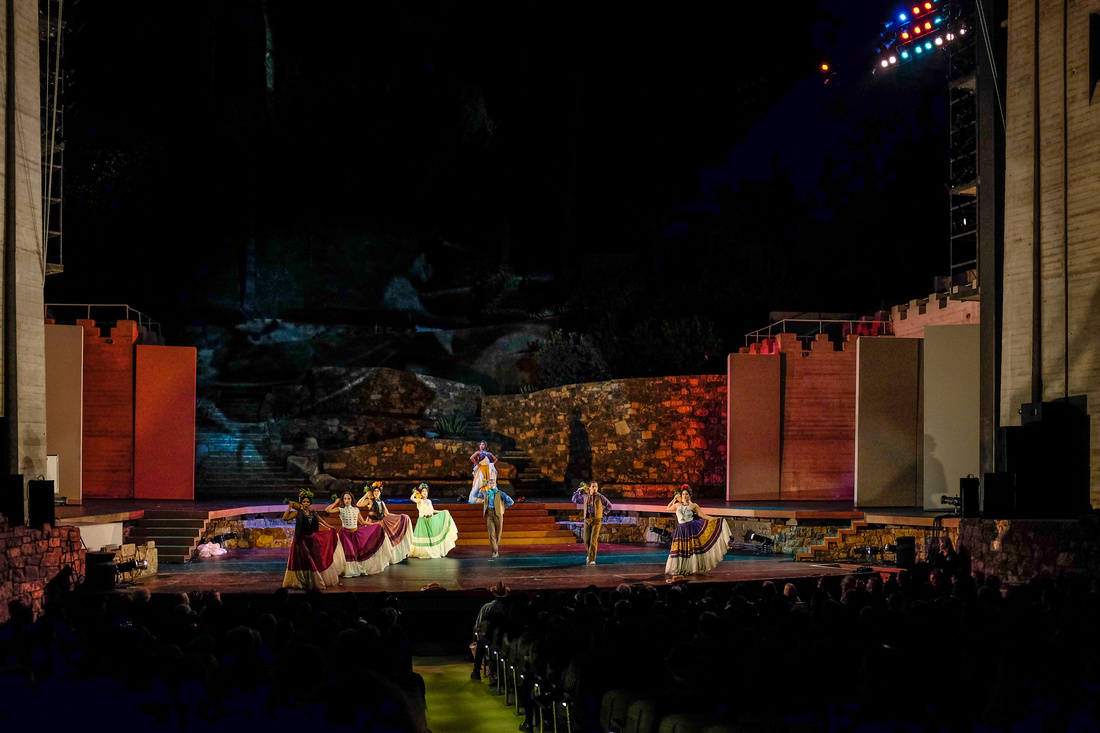 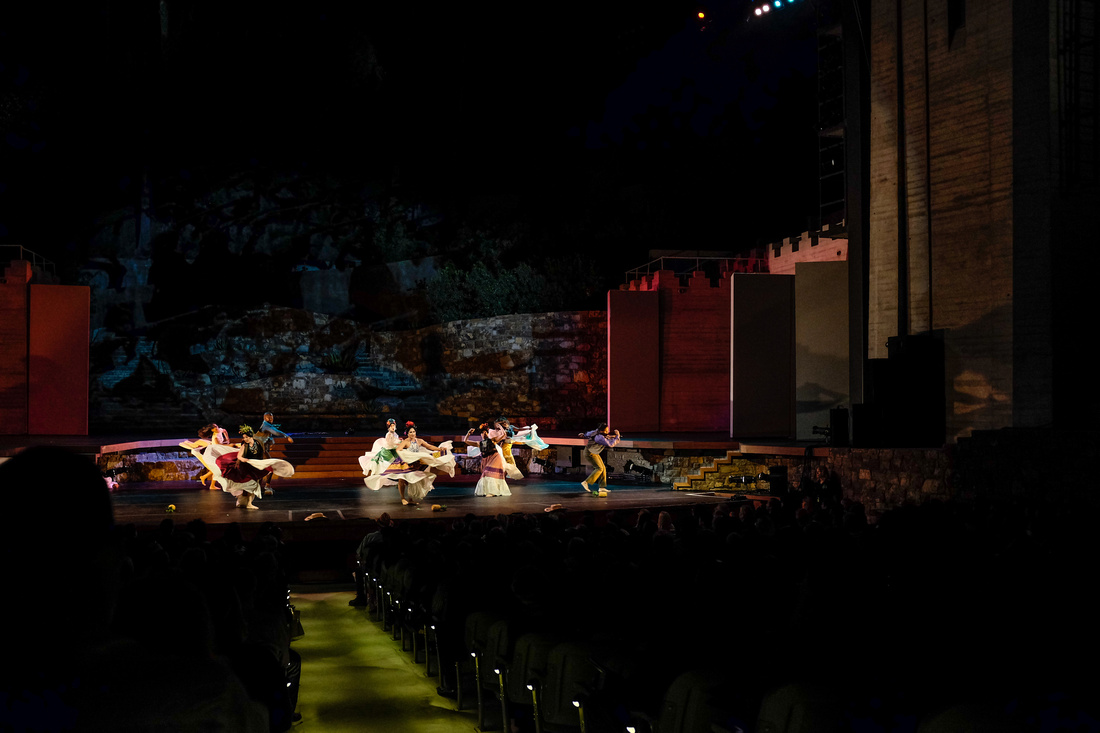 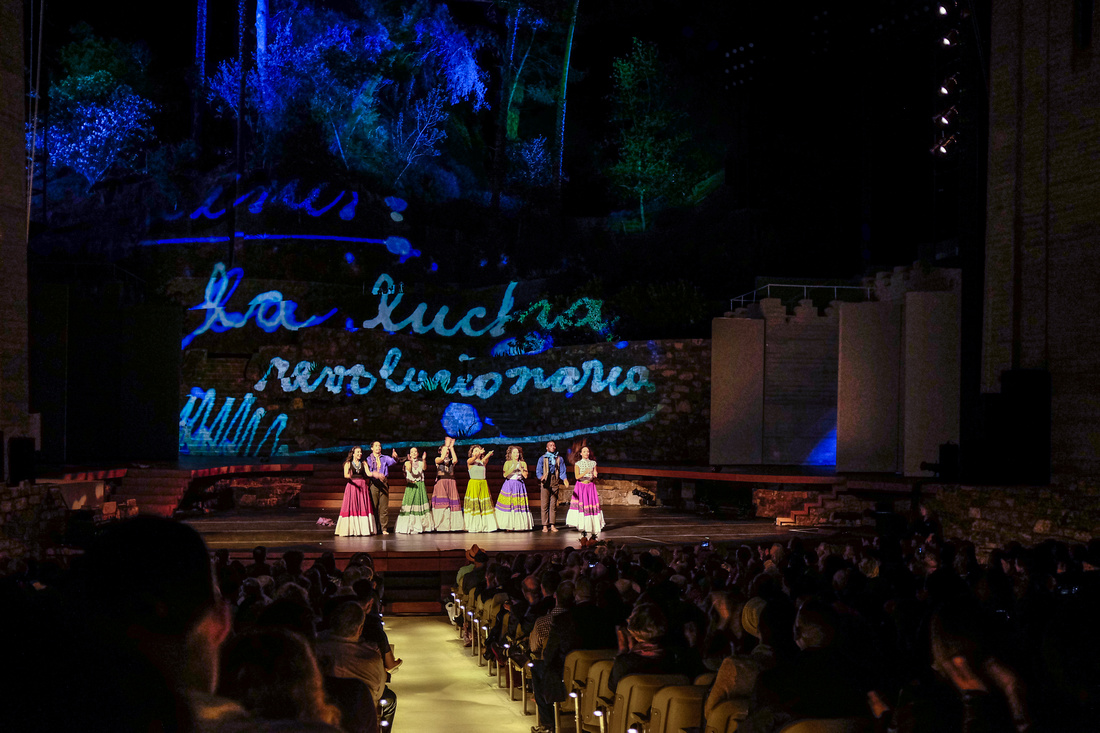 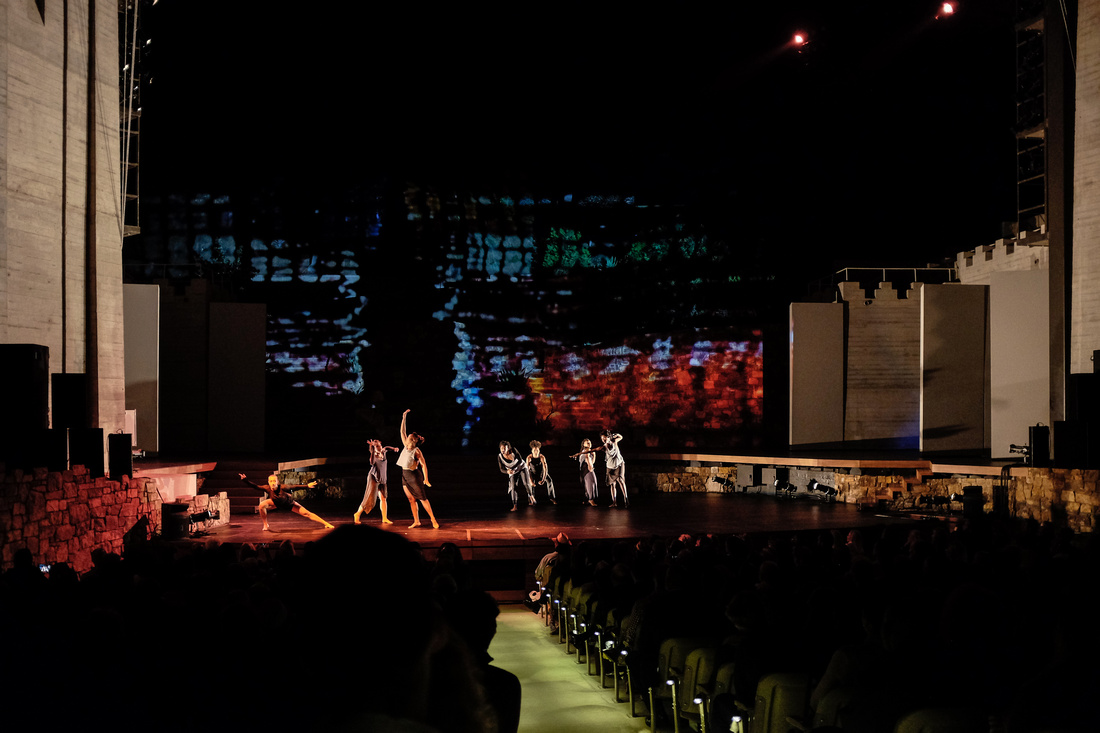 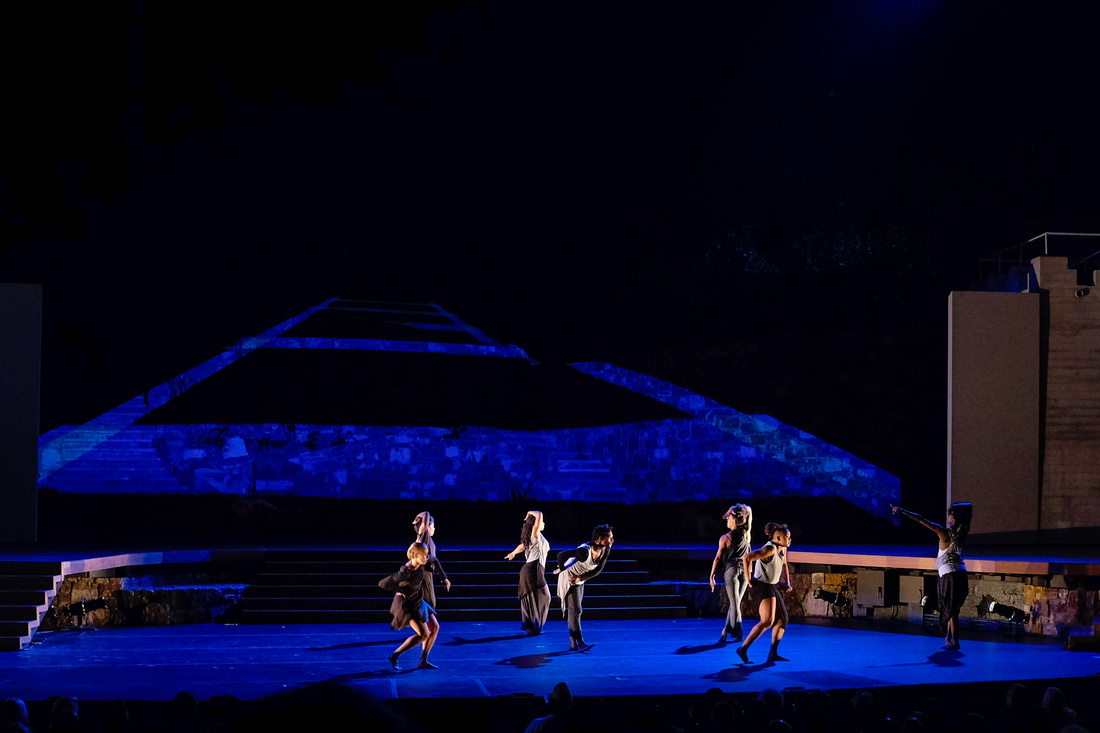 The first half of the Urban Bush Women's performance featured recorded music of John Coltrane.  Following intermission, Grammy award winning pianist George Caldwell manned a grand piano on the riser to the left and began to play arrangements of Coltrane's "A Love Supreme".  Here's Caldwell, alone, at 23mm from the cheap seats: 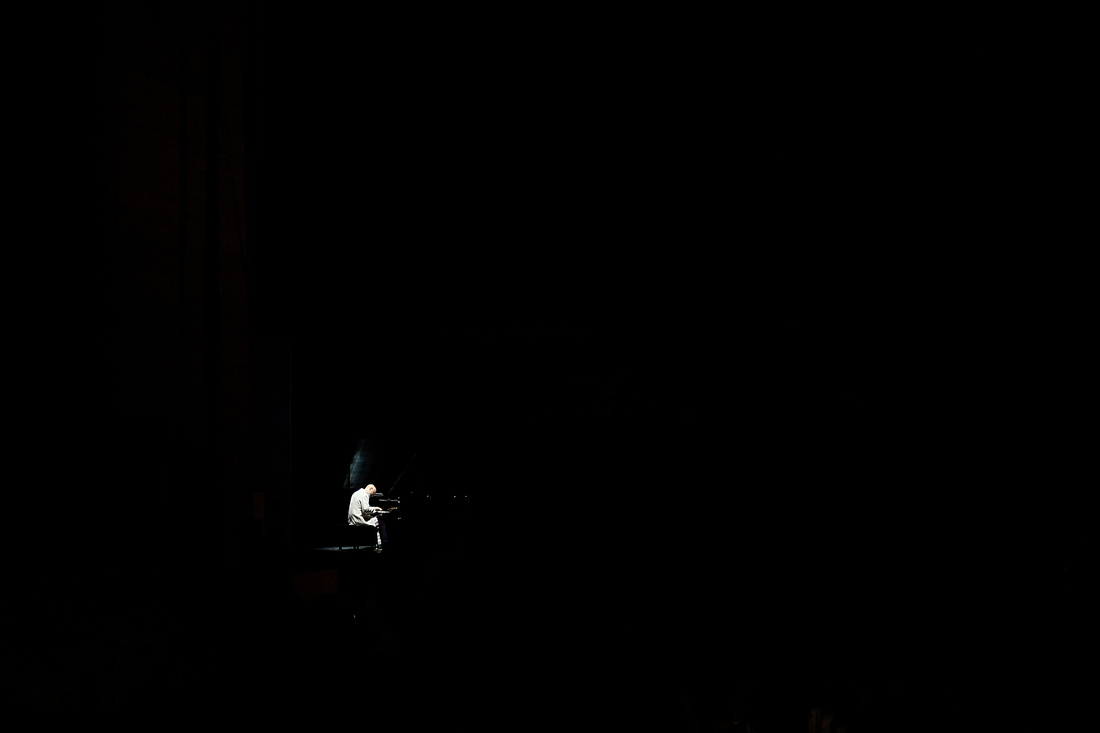 A silly photo, yes.  But there's actual detail in this shot, if you zoom in all the way to the max.  So the show went on: 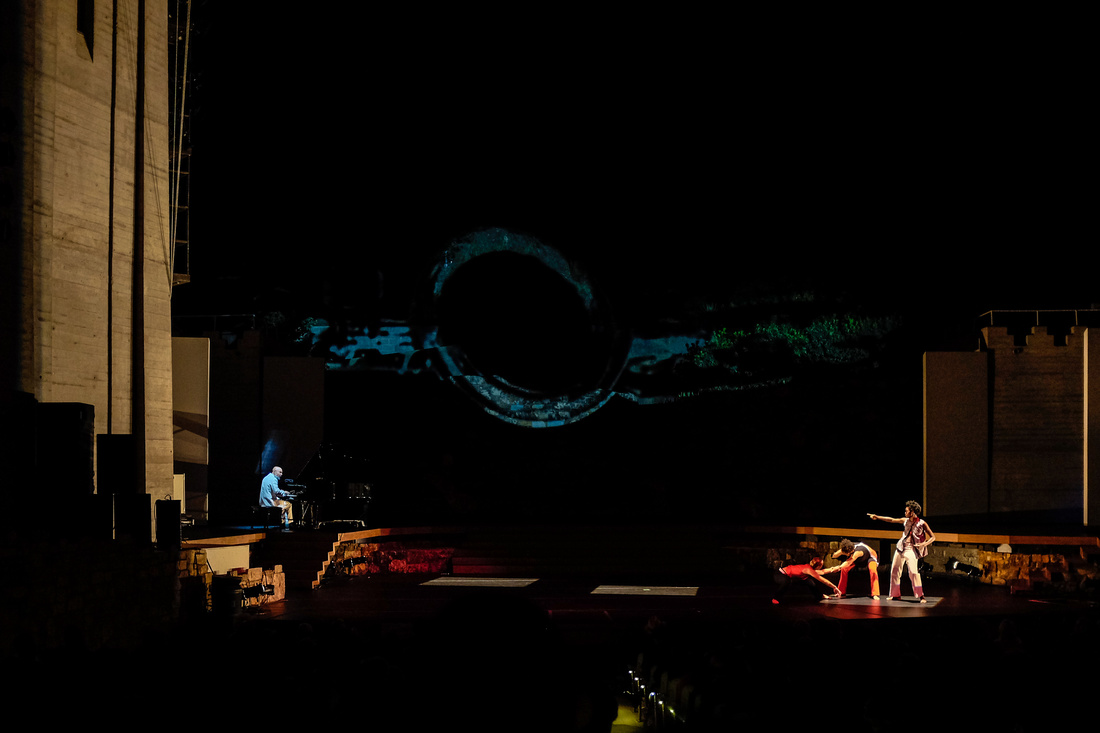 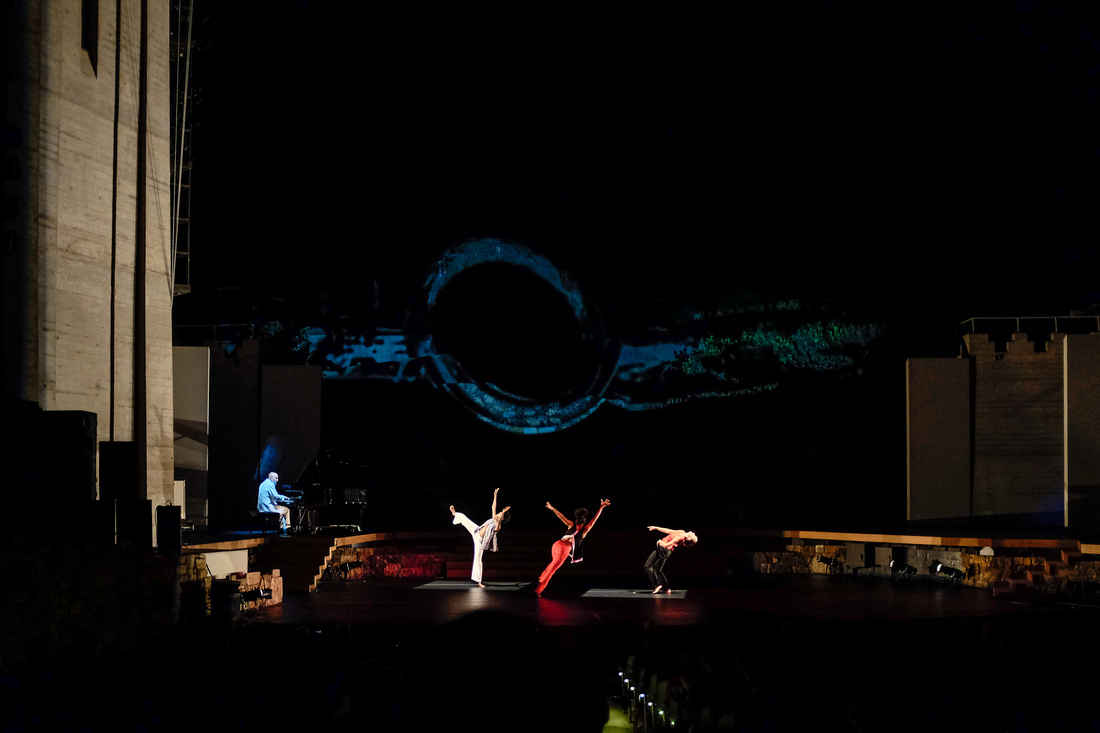 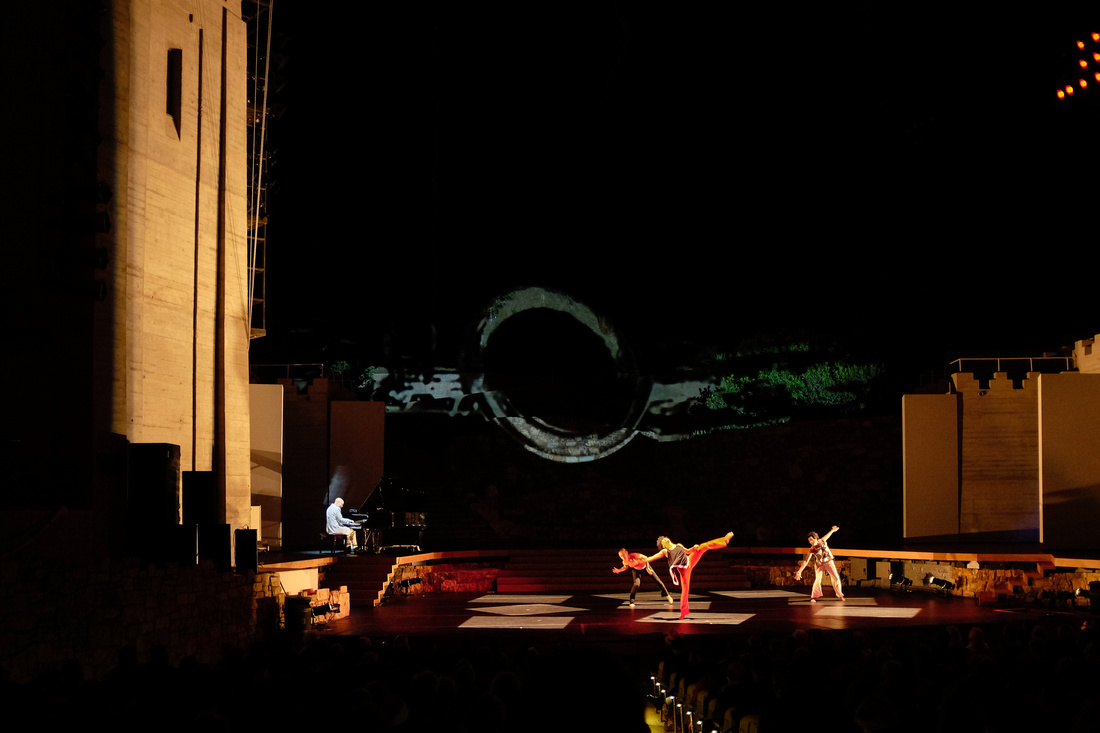 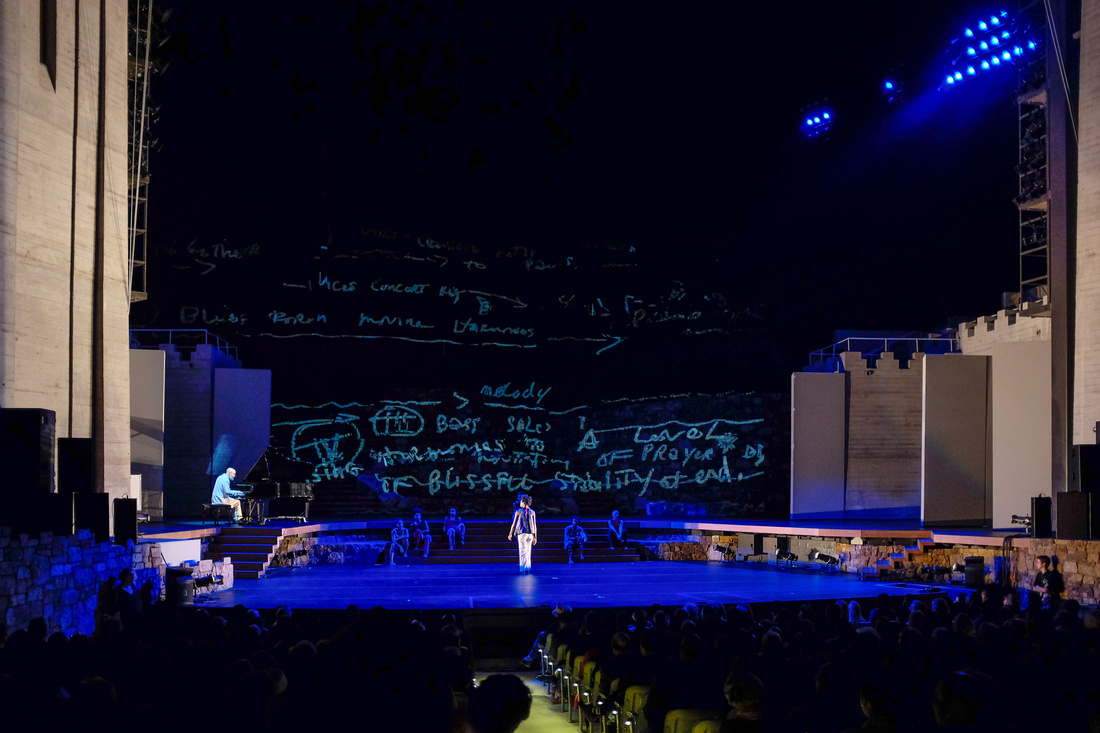 All in all, this was a great night of dance, and a surprisingly decent collection of photos to remember it by.  I'll never prefer the X100S as a dance camera, but I continue to be impressed by the image quality of this little gem, and the fact that it can go anywhere so easily.