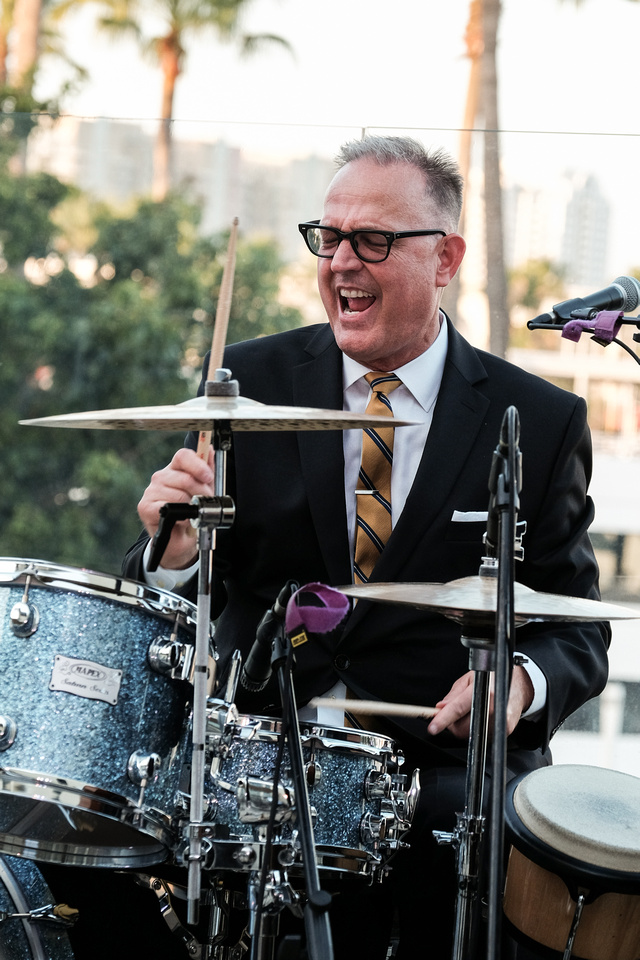 Last week I took the opportunity to drive (very, very slowly in rush hour traffic) up to Long Beach to see the Jet Set Quintet, aka the Tony Guerrero Quintet when they perform music from, or inspired by, the swingin' jazz sounds of the fifties and sixties.  They performed on the Veranda of the Long Beach Aquarium after closing hour as a part of the weekly series of concerts produced by Owen Kirschner.  I always like to see the Jet Set Quintet for a variety of reasons.  First, I'm a big fan of band leader Tony Guerrero, who's a smart, creative, and thoughtful guy with a load of talent on trumpet and flugelhorn.  Second, I'm a big fan of the music they play as the Jet Set Quintet, ranging from straight ahead jazz, to calypso, to show tunes and TV themes from that era. As a band, they're very tight.  And last, but certainly not least, they are a fun bunch of guys, with a great stage presence and relationship among each other and the audience.  As laconic as Tony Guerrero is, drummer Matt Johnson is equally expressive, which always guarantees a target-rich environment for music portraits.

I brought the Fuji X-T1 with three lenses to the show, the 10-24, 16-55, and 50-140, and used them all.  Not having been to the Veranda before, I wasn't sure what to expect in terms of orientation to the sun at that time of day, 7:00 to 9:30-ish.  As it turned out, the audience faced pretty much due east, with the sun setting behind the Aquarium, placing the band in 100% shade, and the Shoreline Village background in nuclear sun.  There was about a six stop difference between subject and background to start, making available light photography an exercise in what to get and what to give up on.  Also, the first row of seating was about three feet from the band, making it difficult to change positions without being a distraction to the audience.  I never want to be a distraction to others who have paid good money to see a concert, especially in an intimate setting like this.  So I took up a position in the front row, right, and stayed put, letting my lenses change my point of view. Another creative choice I made was to capture these images using the Classic Chrome film simulation that is available on the X-T1.

One casualty of this choice was Robert Kyle on sax and flute.  From my vantage point, Robert was pretty much pegged to a spot in front of a speaker, with a wall behind that to camera left.  That wall had an exit sign and some other kind of fixture that I didn't want to include in my shots, so the 50-140, racked all the way out, was the best I could do. 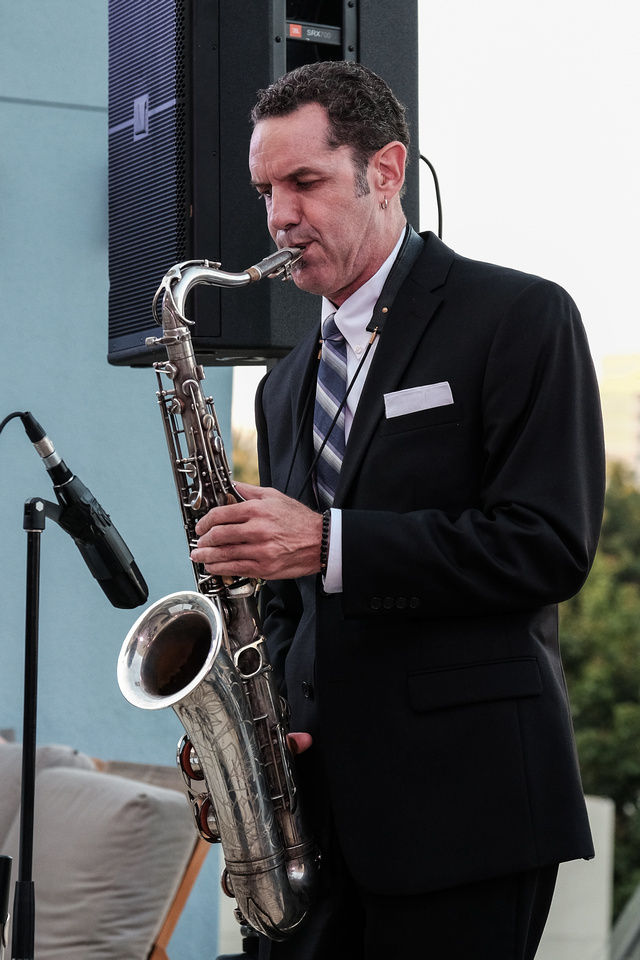 It's a proper exposure, but that's about all I can say about it.  Definitely doesn't do him justice.

Not so with drummer Matt Johnson.  He takes turn on the mic with Tony, and is a very cool guy.  Also super expressive.  Whenever I had a clear shot in this tight stage area, I lasered in on Matt.  I was looking for expressions like this, and was not disappointed: 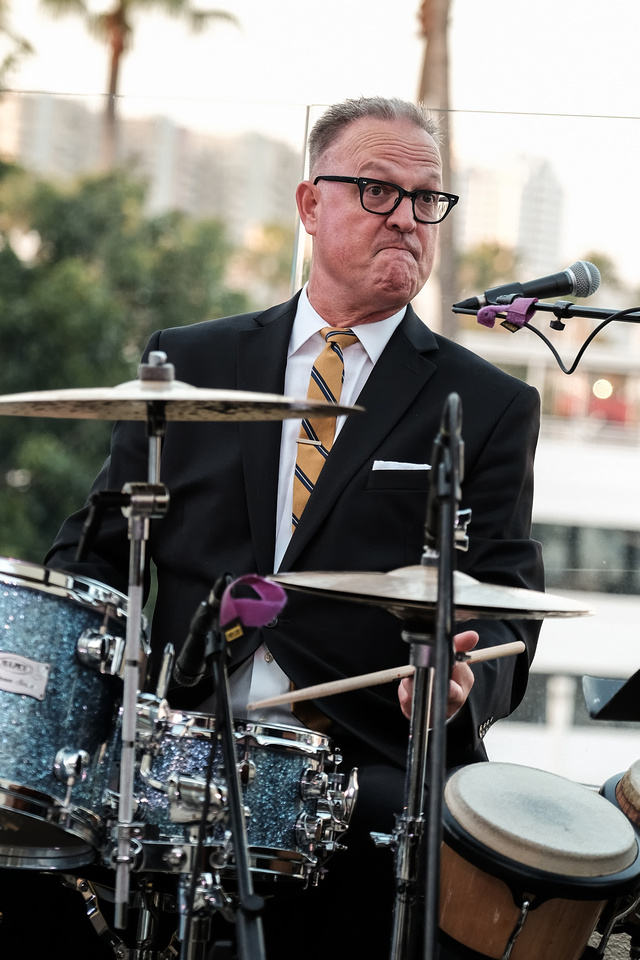 Tony Guerrero is pretty rock solid when he's playing, and there's not much difference between one look and the next.  However, at this particular moment, the setting sun was bouncing off the glass wall of the Hyatt Hotel in the distant background, and I leaned this way and that to catch the reflection just wrapping around his coat, to provide a little extra something to the photo: 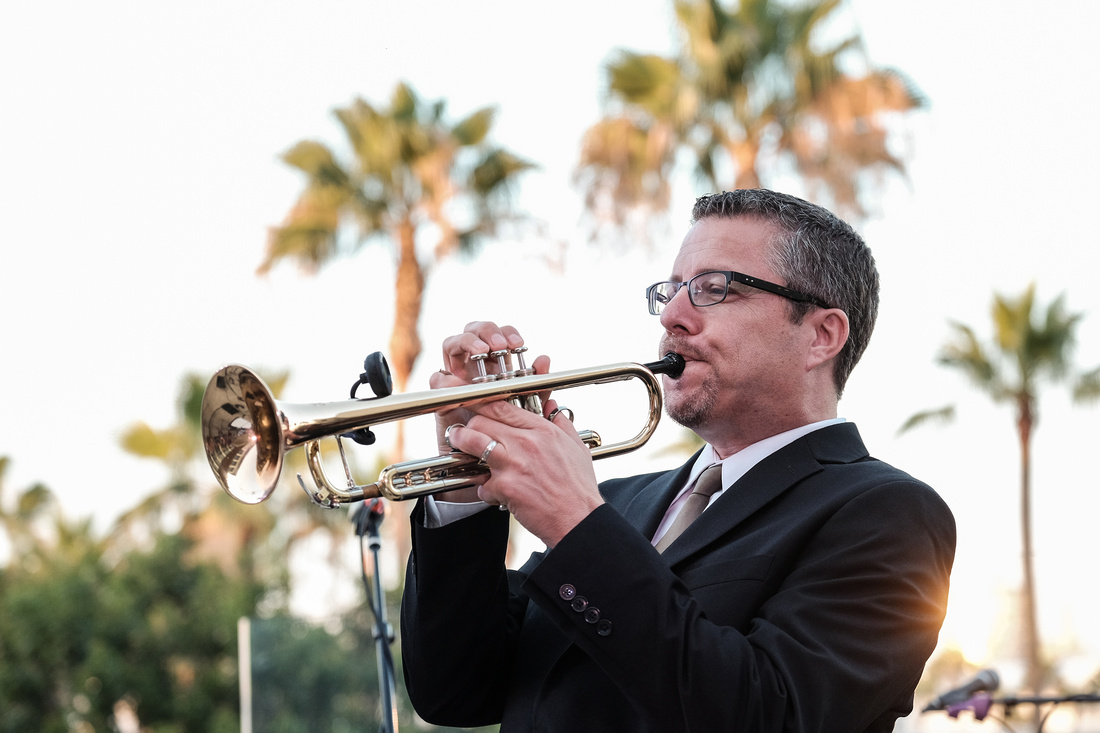 As I said above, the dynamic range from shadow to highlight here is so vast that you can't even see the hotel back there.  It's totally blown out.

Joining the group for the first time was bassist Dave Enos.  He was directly in front of me, but unfortunately so was a music stand, so I never had an unobstructed view.  But never mind, as Dave often crouched tight up against the neck of the bass, whether to play the high notes, or to read music, I'm not sure.  But he was fun to shoot. 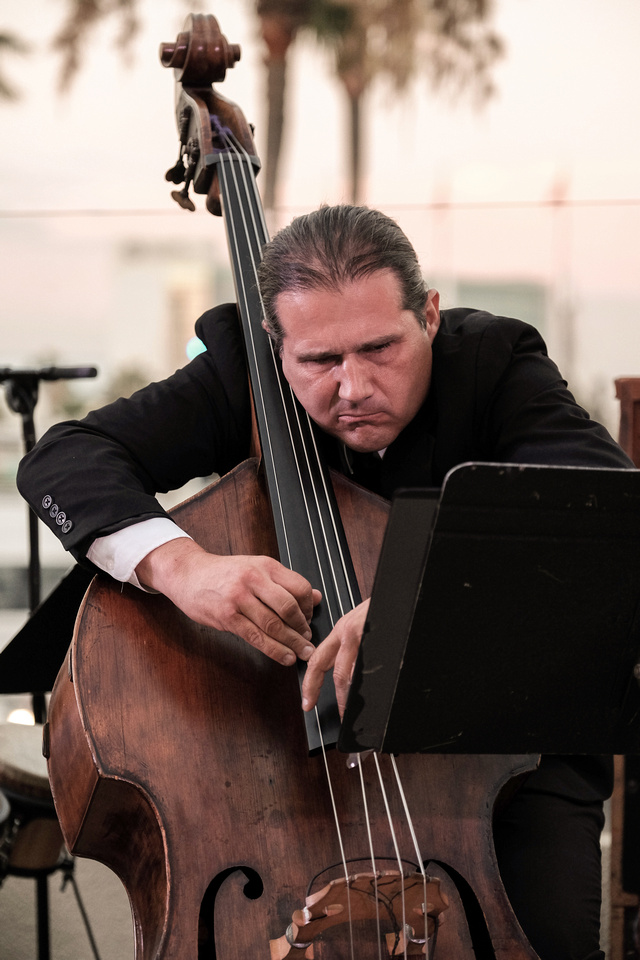 Dave Siebels manned the Hammond B3.  I'm a sucker for the B3; I just love the tones it makes and the music it's often performed with.  The spinning Leslie speaker provides this great tremolo that I really love.  But getting an evocative photo of a keyboard player when you don't have unimpeded access all around is difficult, so here's the best shot I have of Dave, hitting and maintaining a high note as the Leslie wails: 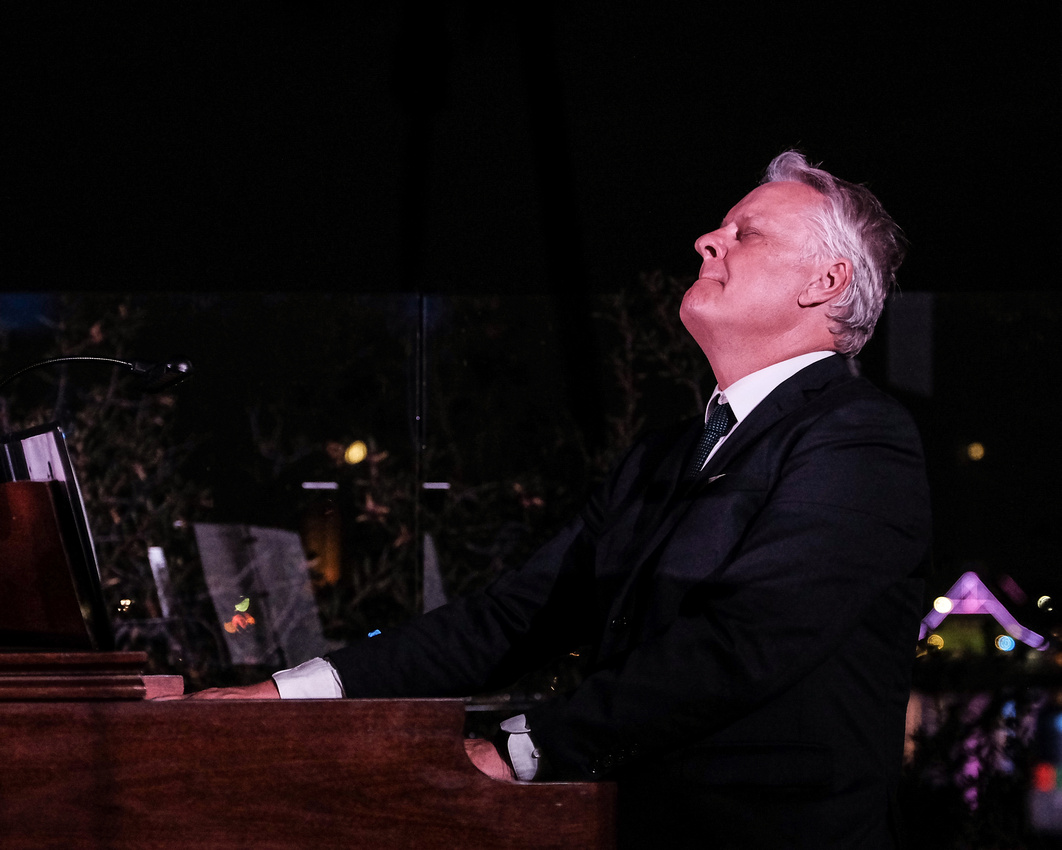 As the night fell, I decided to switch to black and white, not because the Fuji can't handle color on stage - it does so quite well, but I didn't care for the choice of red light - but because I thought the mood of the music would lend itself to black and white.  So these images are straight from the black and white-with yellow filter setting on the X-T1. 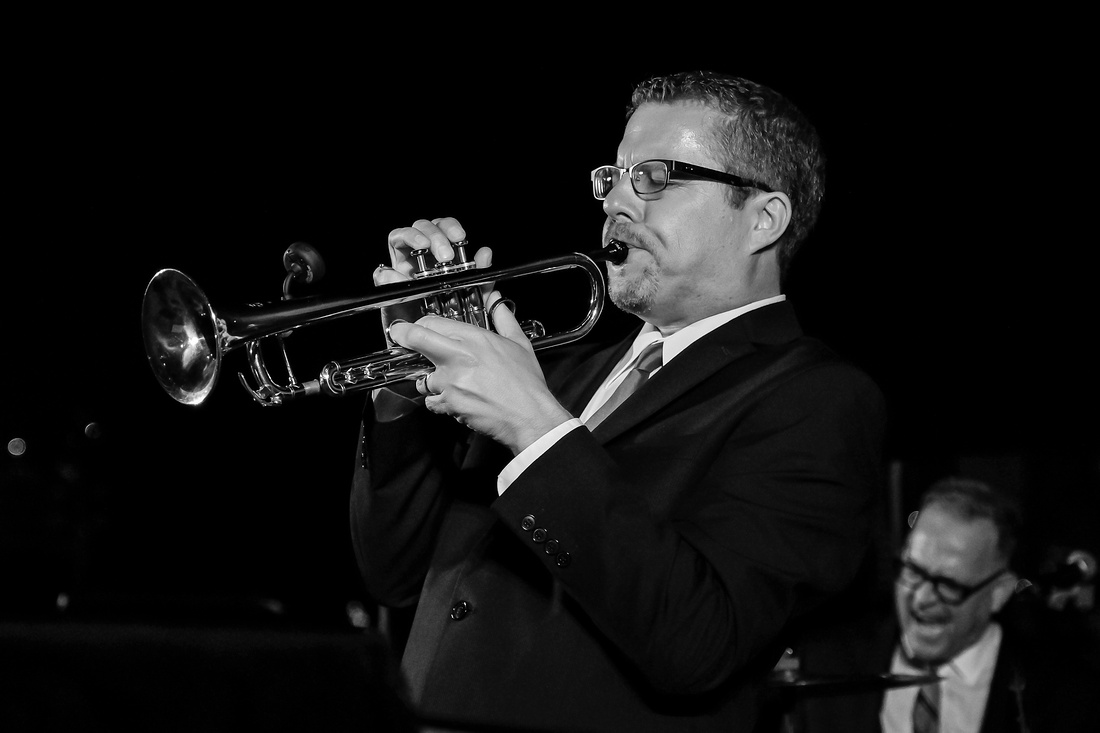 As I said above, Tony Guerrero's expression while playing doesn't really change much, but Matt Johnson's does, so while I'm focusing the camera on Tony, my eye is glued to Matt, and this is exactly what I was looking for.

Likewise, this shot of Dave Enos and Matt is a blend of focusing on Dave while choosing the point of capture based on Matt. 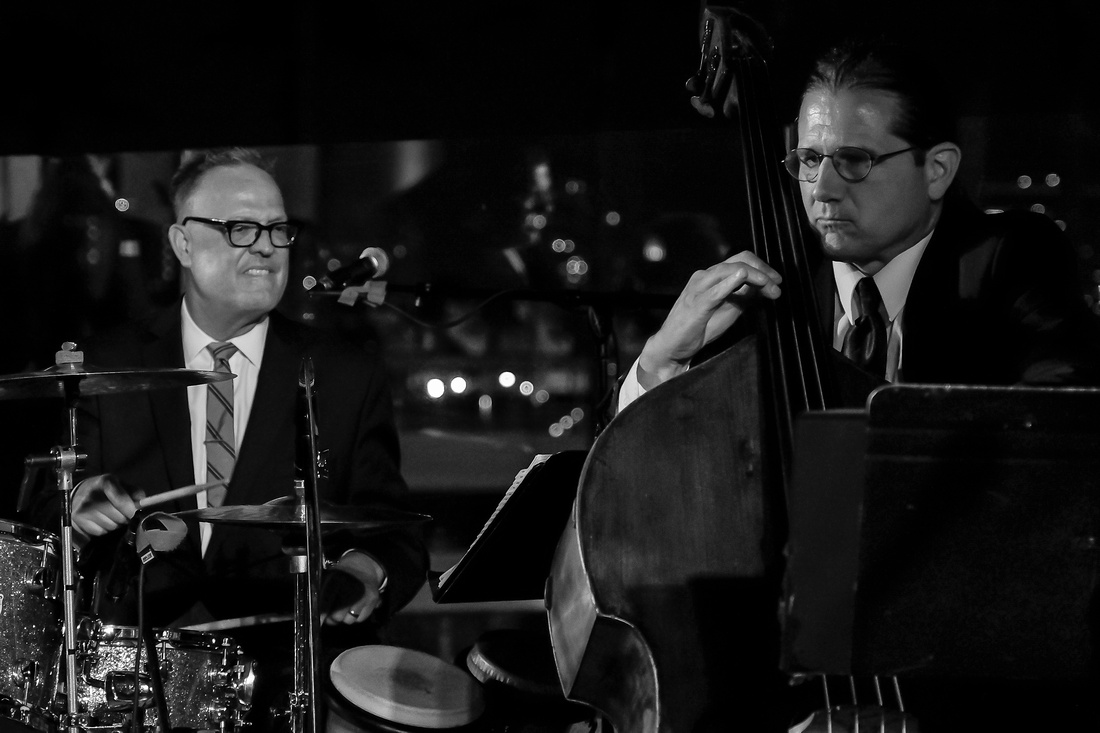 Finally, a wide shot showing the entire quintet; once again, my moment of capture should by now be obvious. 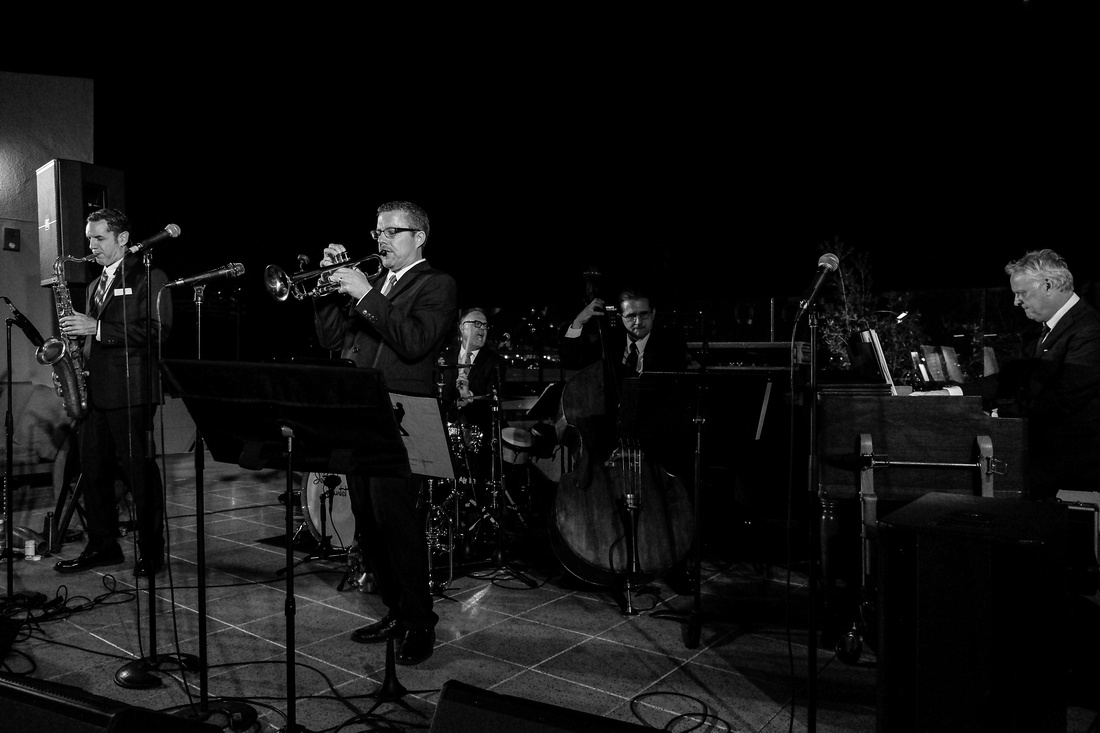 This was a very enjoyable evening of great music and some fairly successful photography.  I'm so glad I'm using the Fuji X system for gigs like this.