The 2015 KSBR Birthday Bash - Some Thoughts on Choices and Technique 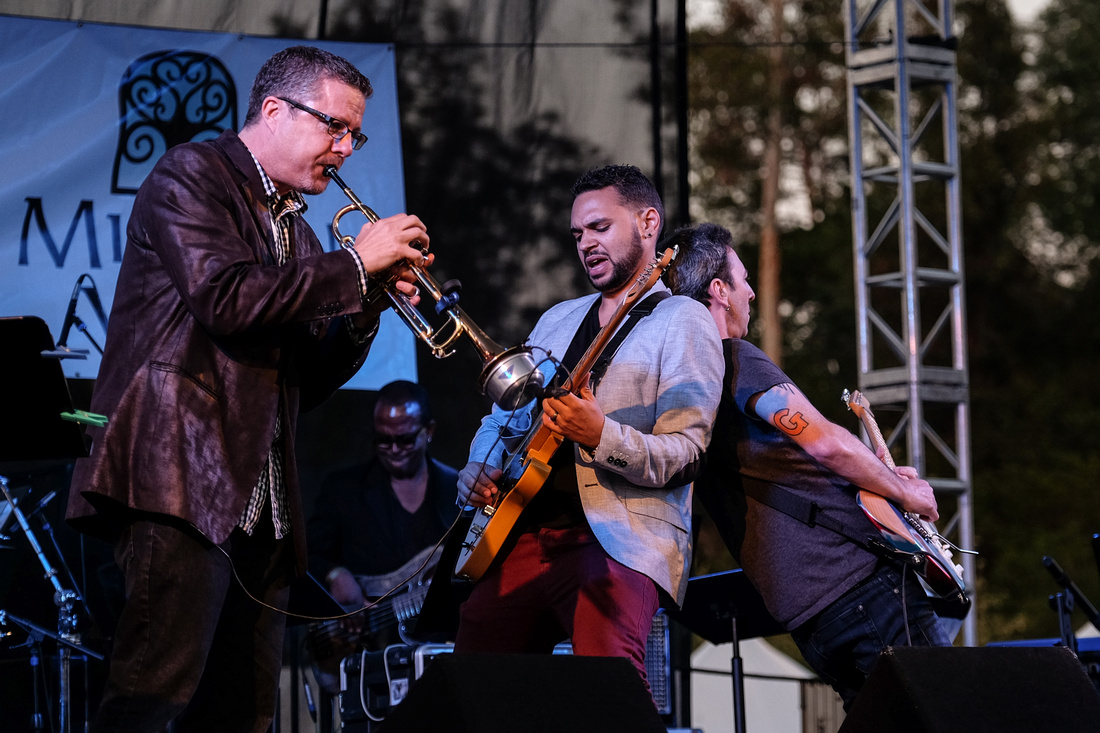 It's been about two months since my last blog post, two months of crazy shooting, travel, and massive editing of images made during this time.  So I want to catch up a bit, starting with my favorite photographic and music event of every year, the annual KSBR Birthday Bash, held on Memorial Day weekend in Mission Viejo.  I'm fortunate to have excellent access to the artists as they perform and backstage, so it's a target-rich environment.

It's also a physically demanding day, juggling equipment and angling for position in ways to avoid blocking the views of audience members who pay serious dollars to support KSBR and see these amazing artists up close.  In recent years, I've come away with excellent images with my Canon gear, but also with significant back and knee pain from photographic gymnastics during the day's and evening's performances.  So as part of my ongoing migration from a heavy DSLR kit with monopod to a less-hefty mirrorless kit, I shot this year's Bash with my Fuji X-T1 and three lenses, one on the camera, two in small belt pouches, and no monopod.  My lenses of choice were the Fuji 18-135 variable aperture lens for daytime shots, the 10-24 f/4.0 for wide and evening shots, and the 50-140 f/2.8 for evening closeup work.

The 18-135 on a APS-C chip is a 24-203mm equivalent on a full-frame camera, giving me excellent range from wide to tele.  The aperture varies with focal length, which is usually a deal-breaker for performance work, but under daylight conditions, shooting wide open isn't necessary, so this is a versatile, do-anything lens that frees me from changing lenses except when ultra-wide perspective is called for.  Image quality is fine.  Here are Chuck Loeb, Tom Dante, Vincent Ingala, Jay Gore, and Brian Bromberg during an early part of the afternoon's concert.  Easy, done deal. 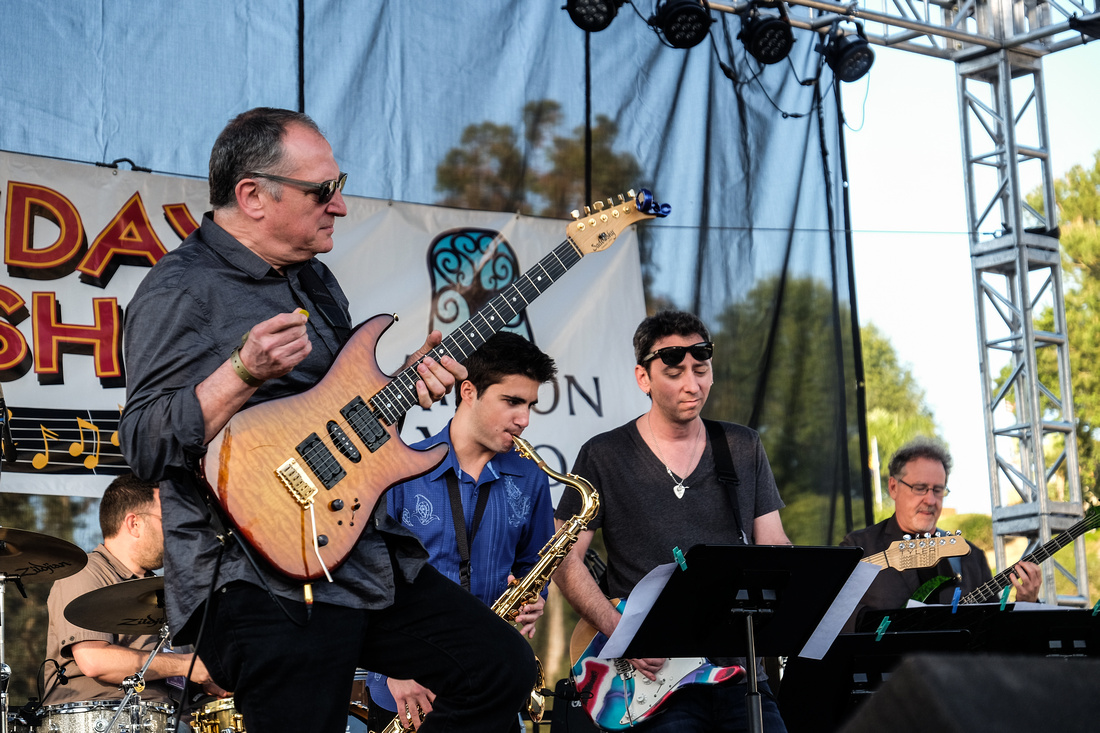 Done deal, but nothing really special either.  I wanted this shot, because it's the first time I've seen the legendary and incredibly talented Chuck Loeb live, even though the musicians here are supporting the featured artist for this number, Keiko Matsui, off-camera to the left, behind a TV camera blocking my view from this angle.    So it's not really the kind of image that I specifically look for.  Increasingly, I try to capture what might be termed as the musicians' personal moments, not necessarily those moments that are meant for the audience.  For example, one of my favorite shots from a previous Bash was of pianist Freddie Ravel, who punctuated the final note of a rocking song with a jump at the keyboard, both feet off the ground, one hand on the keys and the other in a fist held high.  A great shot, but also very predictable.  I just knew it was going to happen, and I caught it.  This is the kind of concert photography that most shooters (and magazines) want to get.  Another kind of music shot that most people get and love are of the musicians looking at them.  Usually posed in a quick grab shot, these images are found all over the place; they bore me.  They are "forensic" shots; they prove that the photographer was there at that place at that time, and not much else.

So what kind of images speak to me?

For some reason, I like photographs of musicians looking off camera, and away from the audience as well.  They are truly private moments, some contemplative, sometimes even bored, but almost always interesting to me.  I always ask myself, what's going through their minds at this particular moment? 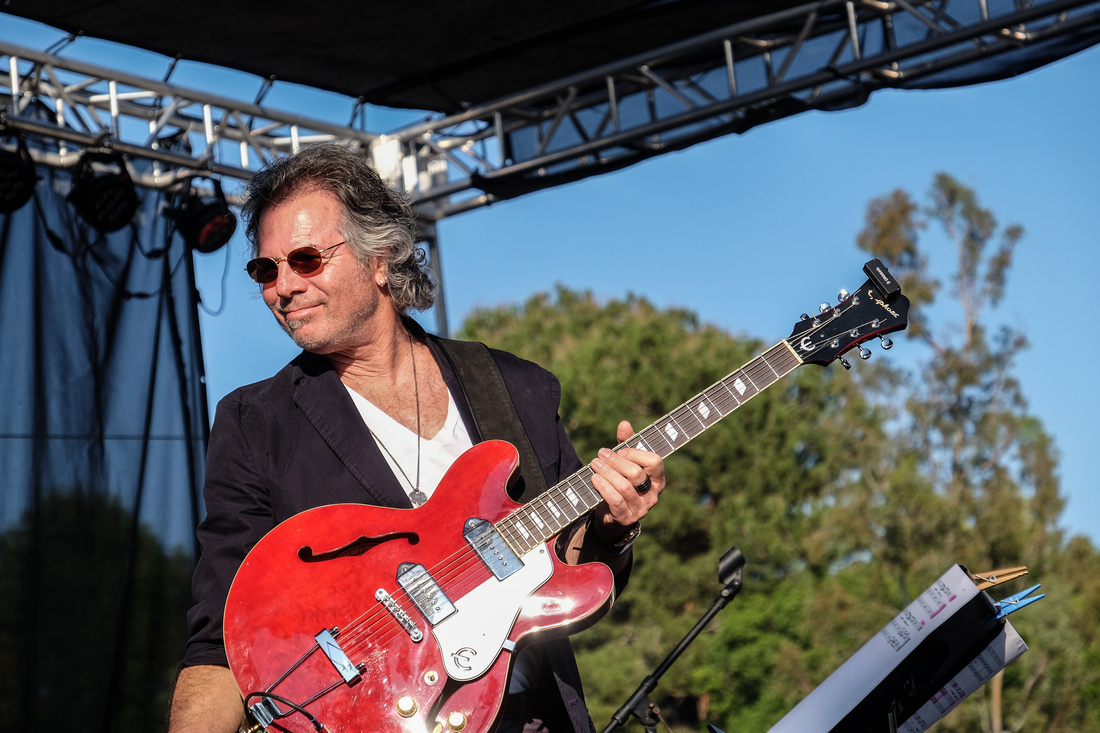 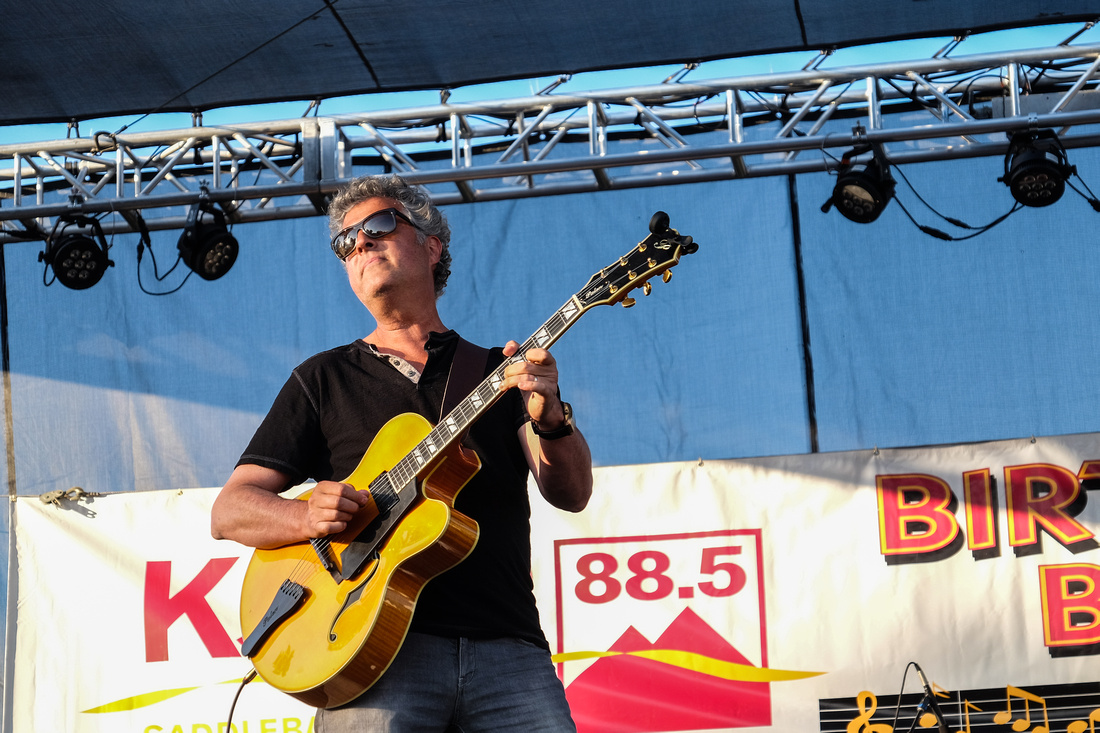 Similarly, I like tight images of performers alone with their instruments.  I have quite a few of these, one of my favorites from this year's Bash is Tony Guerrero, at the beginning of his performance of Prince's "Purple Rain".  This number is just building at this moment, and Tony is solely focused on his trumpet. 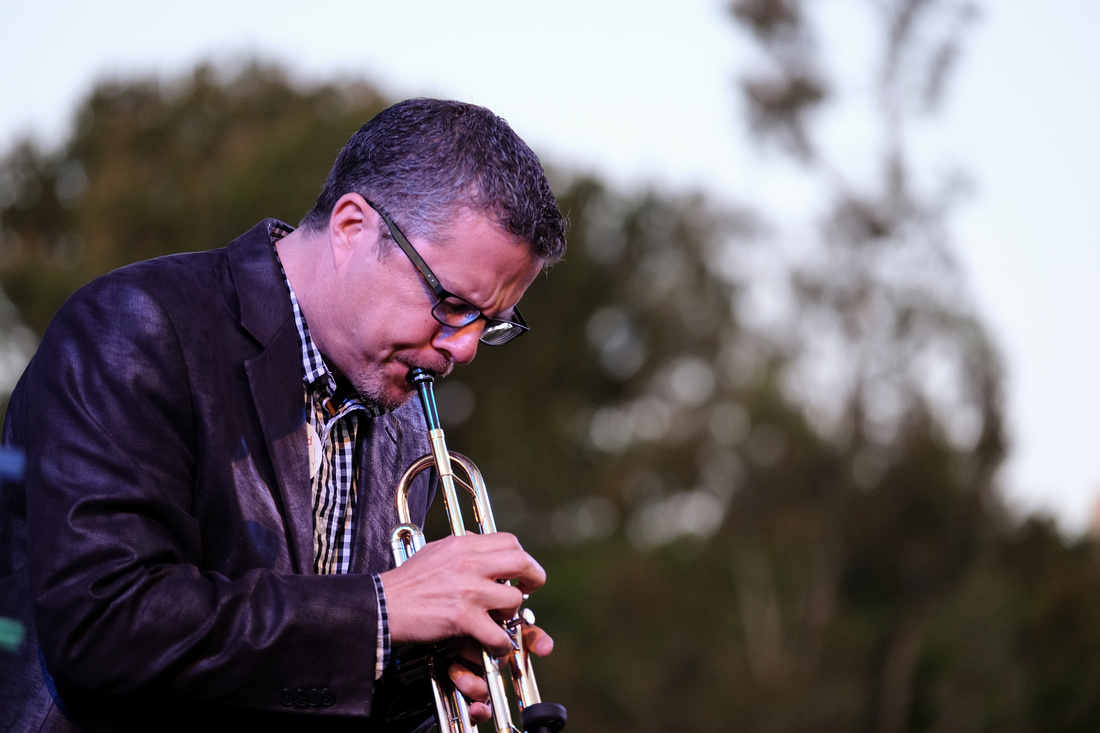 There are word-class musicians around him, and thousands of people in front of him, but Tony is alone with his trumpet.

At the other end of the spectrum are photos of the musicians totally engaged with each other, and not with the audience.  The format of the Birthday Bash lends itself to these photos easily, as the hallmark of the gig is that headline and session musicians are thrown together to support one another with little or no time to rehearse together.  So there are always moments of searching, discovery, and serendipity as artists lead, follow, and blend together to create live music.  To me, the best set of the day was the aforementioned "Purple Rain", led by Tony Guerrero, and featuring a solo by sax virtuoso Michael Lington, and  an epic guitar battle and duet by Adam Hawley and Jay Gore.  These guys were totally into it with each other, and it showed.  This was a true "holy shit" moment. 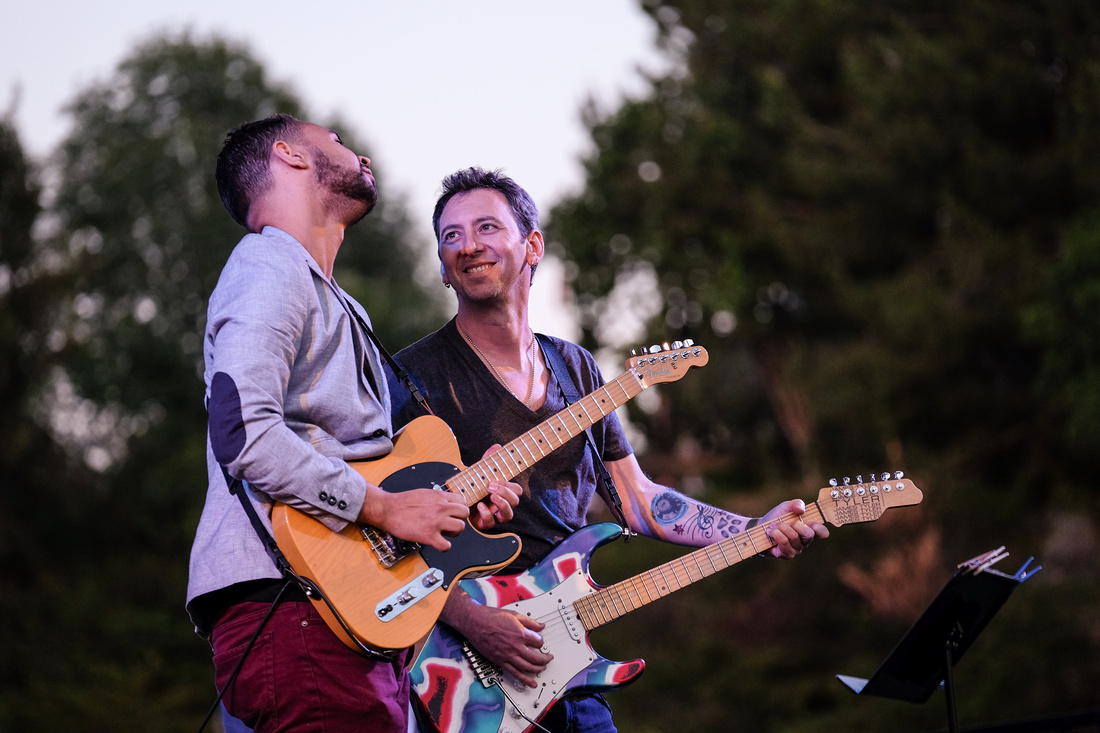 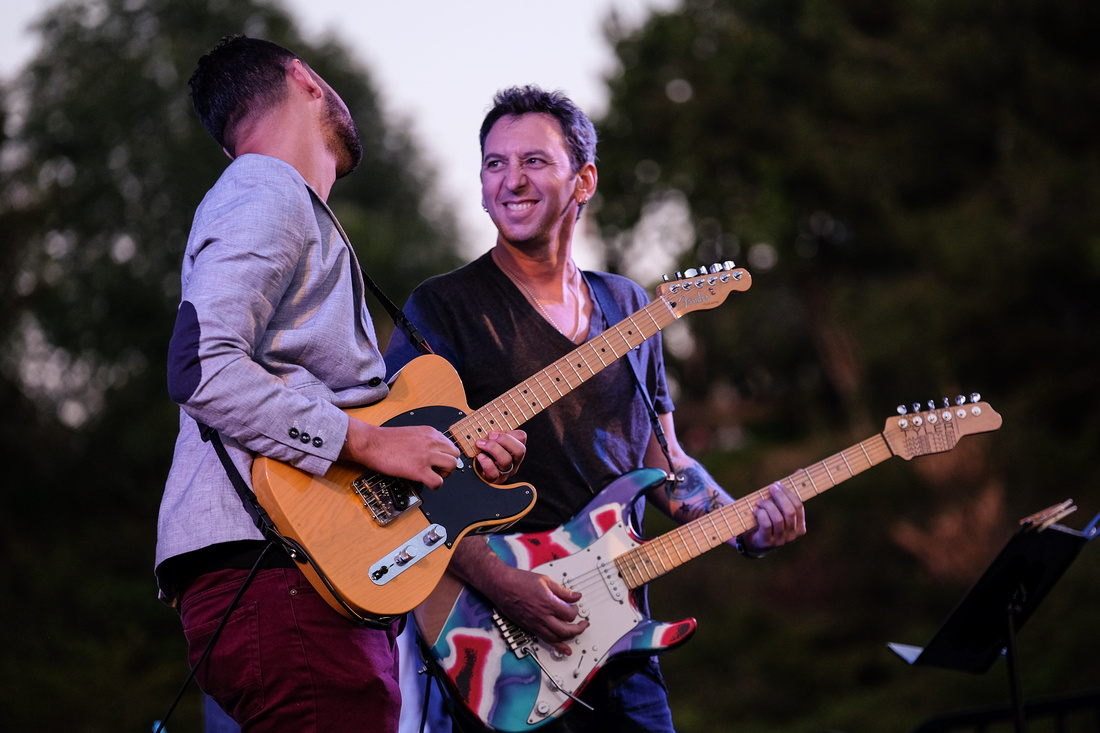 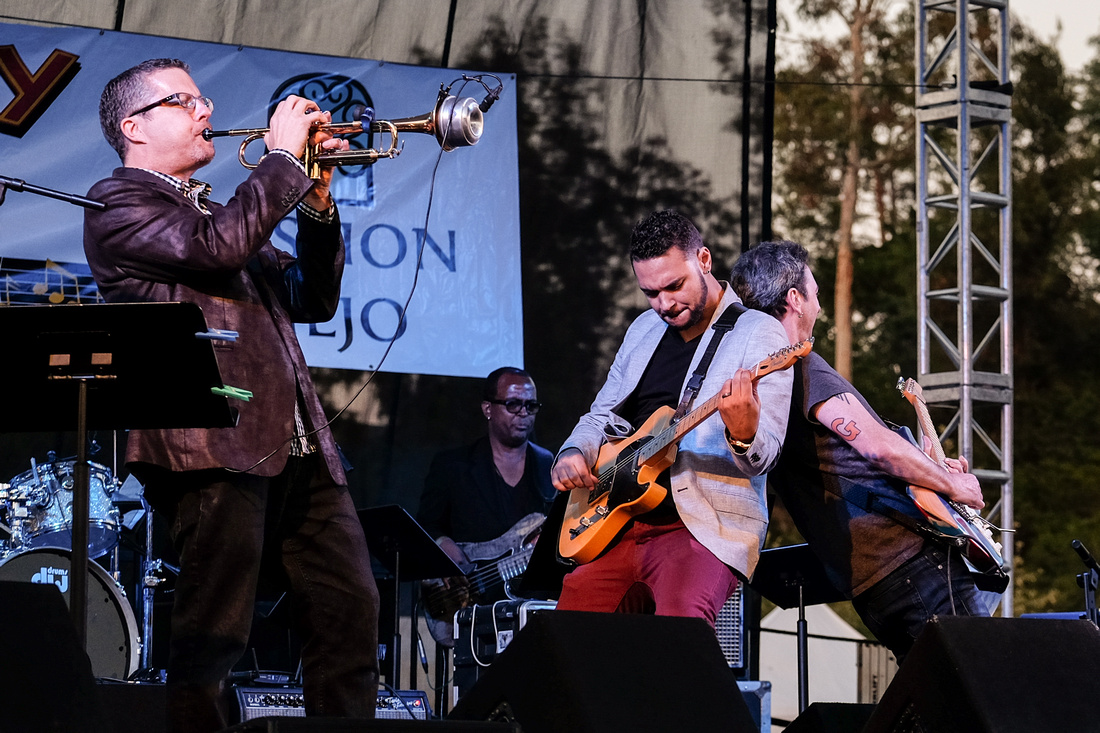 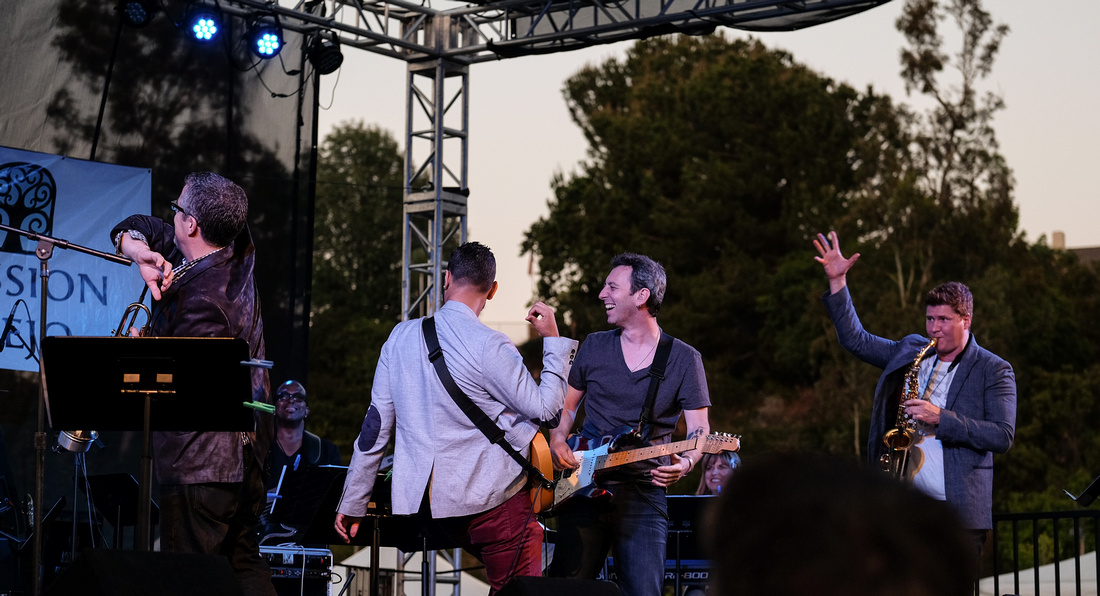 The final note, with everyone looking at drummer Tom Dante for that last crashing beat.  There's true commitment and joy in this shot. They just killed it.   Jay Gore's grin, Peggy Duquesnel's smile at the keyboard, Michael Lington's intensity.  The performance has been perfect and that last note has to be perfect.  And the ever-laconic Tony Guerrero is actually animated.

You can also find these moments when two performers are intently watching and listening to each other.  Here's Michael Lington totally focused on Greg Vail.  The pre-eminent photographer of our times, Jay Maisel, tells us that impactful photos are comprised of light, gesture, and color.  Here, the gesture is Michael Lington's eyes.  They are the first and last thing you see in this image. 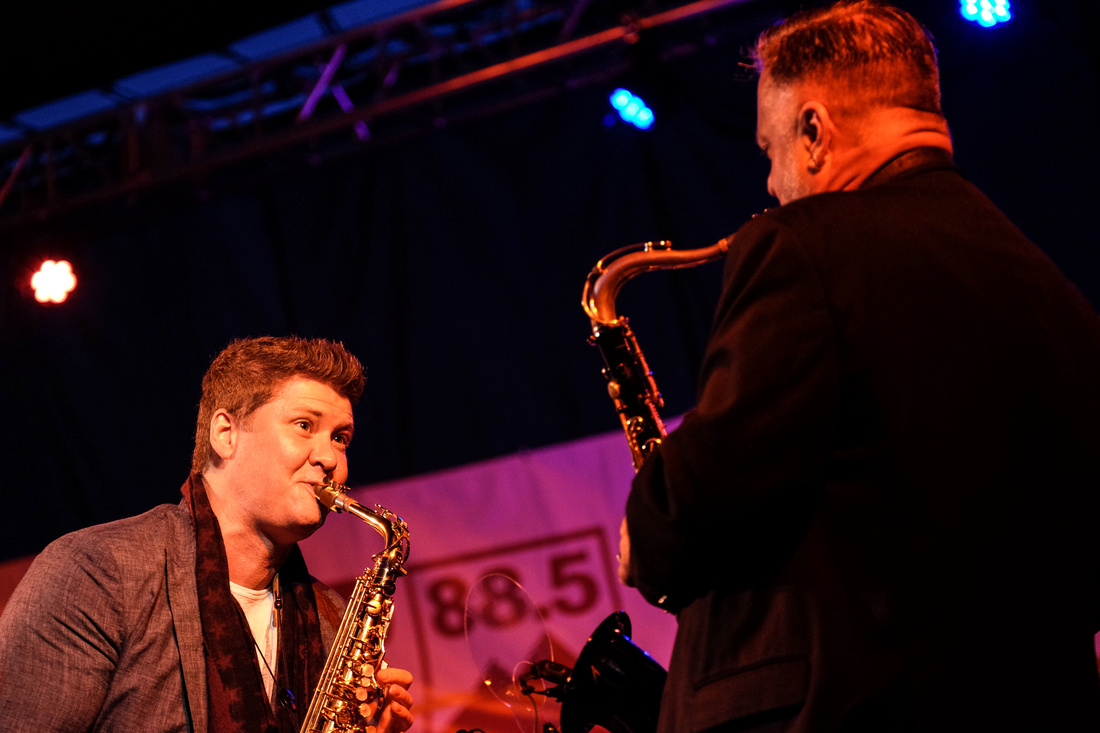 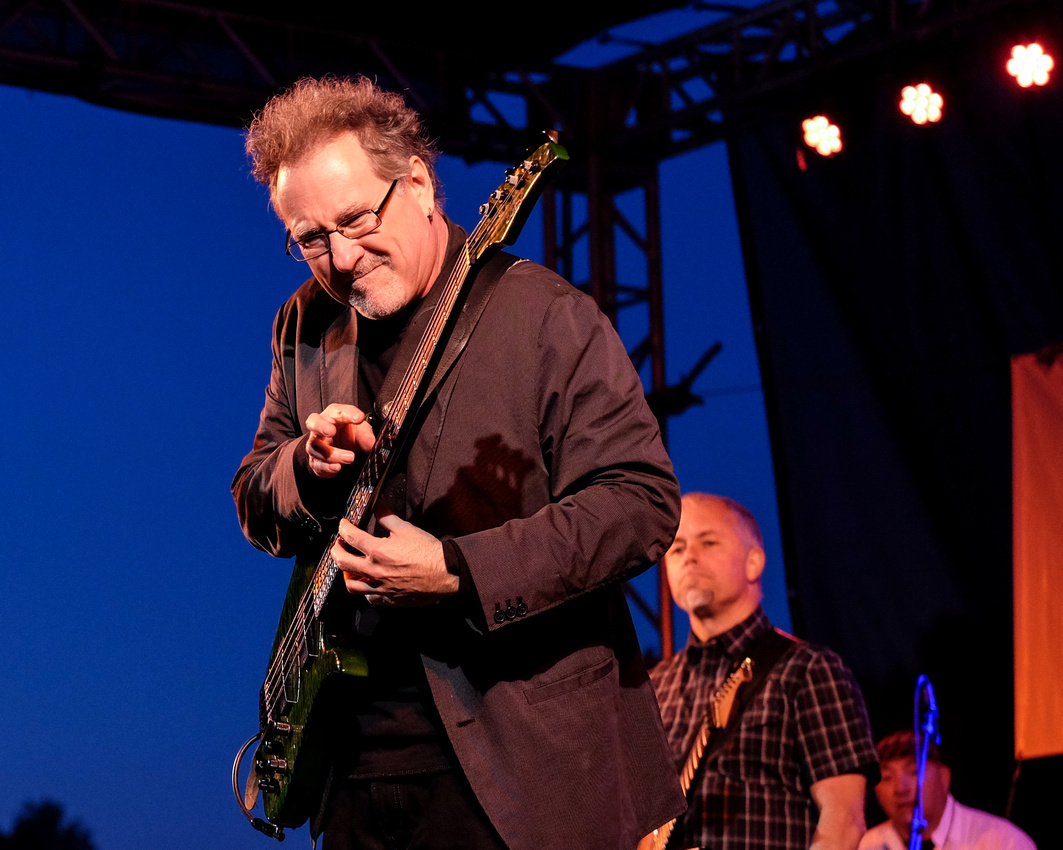 A quick digression… One of the big surprises of this year's Birthday Bash, at least for me as a photographer, was how well the Fuji X-T1 handled the worst kind of mixed light there is.  For about 30 minutes in the late afternoon, as the sun comes close to the horizon and the stage lights are just beginning to take effect (and they are damned LED's to boot), shooting into the westerly direction produces a miasma of crappy tones.  In the past, with my Canon gear, my only recourse was to render photos made under these conditions as black and white.  However, the Fuji handled this vile soup quite well, as these straight-from-the-camera shots of Grace Kelly and Terry Wolman show: 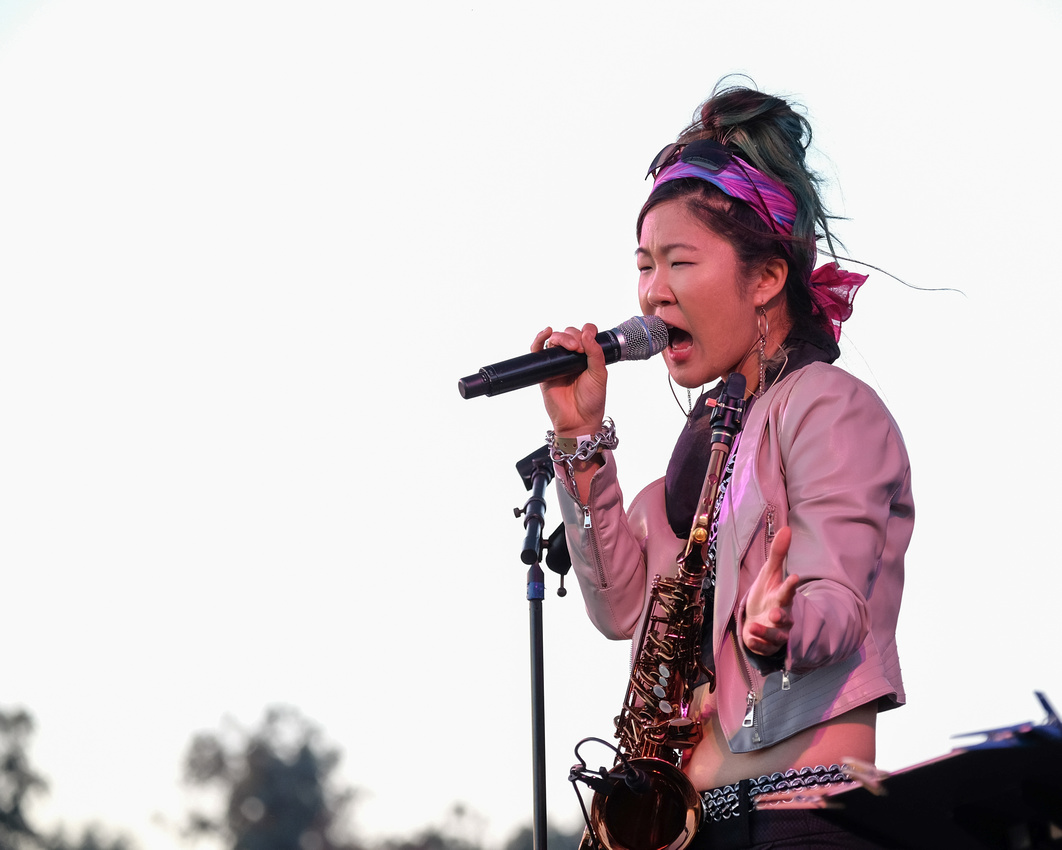 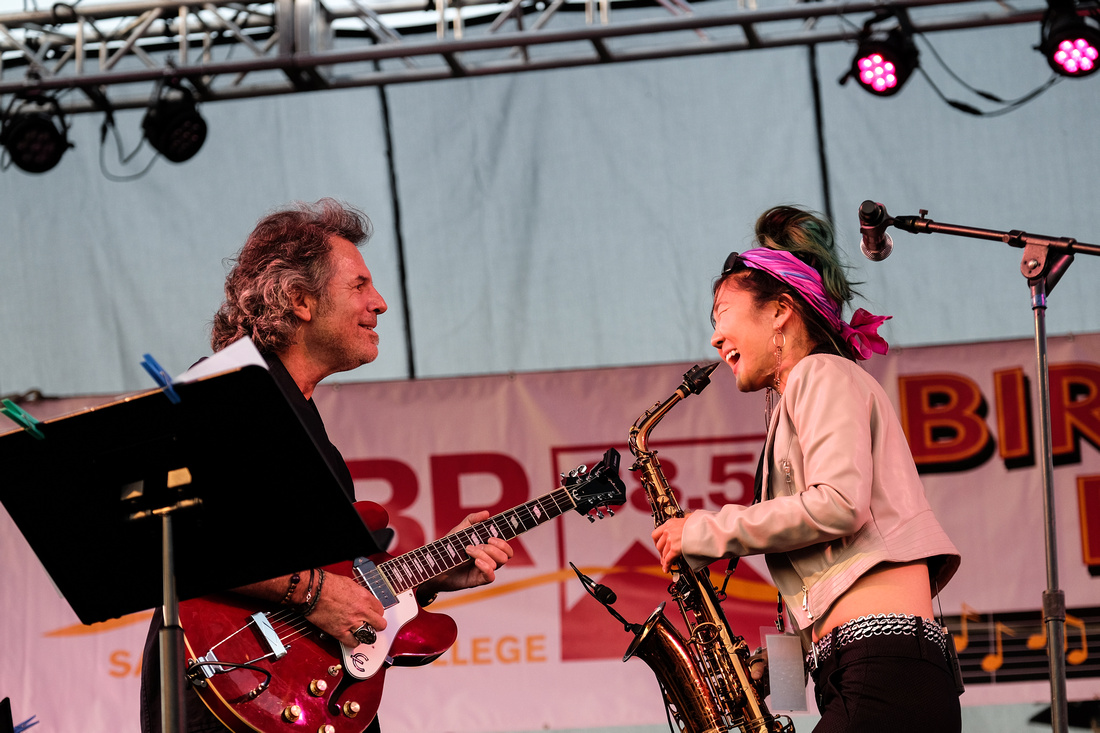 Back to technique and my choices for moments I like to capture…  As the ubiquity of phone cameras has grown, I find myself drawn to images of people taking photos with their phones.  I absolutely hate selfies, but for some reason, I love taking photos of people taking selfies.  They are genuine moments with people engaged with each other.  And sometimes they take place under the strangest circumstances, such as artists using their phone cams during a performance (not between numbers, but during a song!).  Here's Eric Darius using his phone cam during Brian Bromberg's epic bass solo: 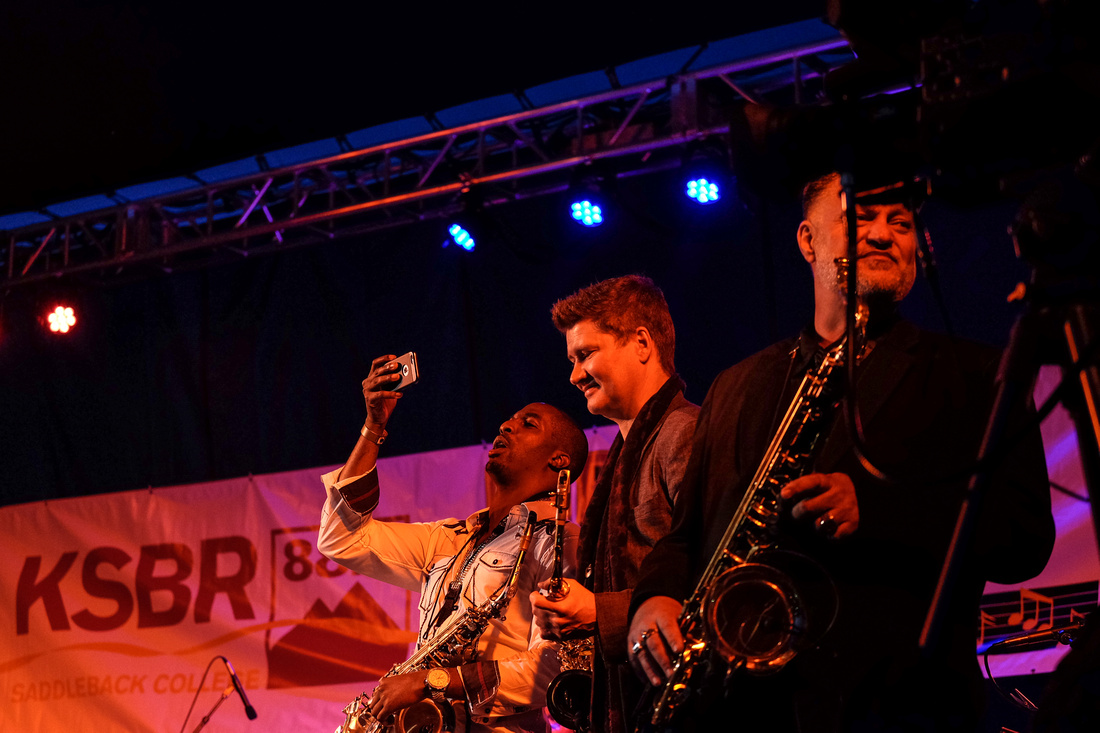 Tony Guerrero, trumpet in one hand and phone in the other, recording the artists and the audience during the big finale: 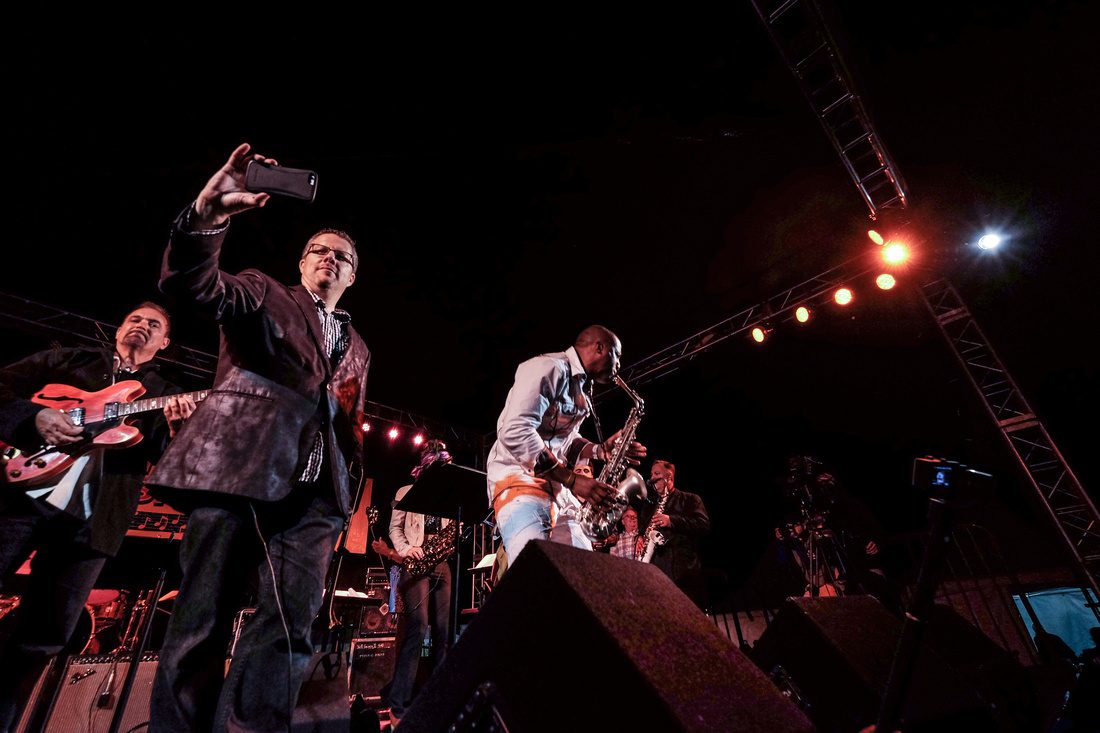 And my favorite image of the Bash, Tony and Dean Grech: 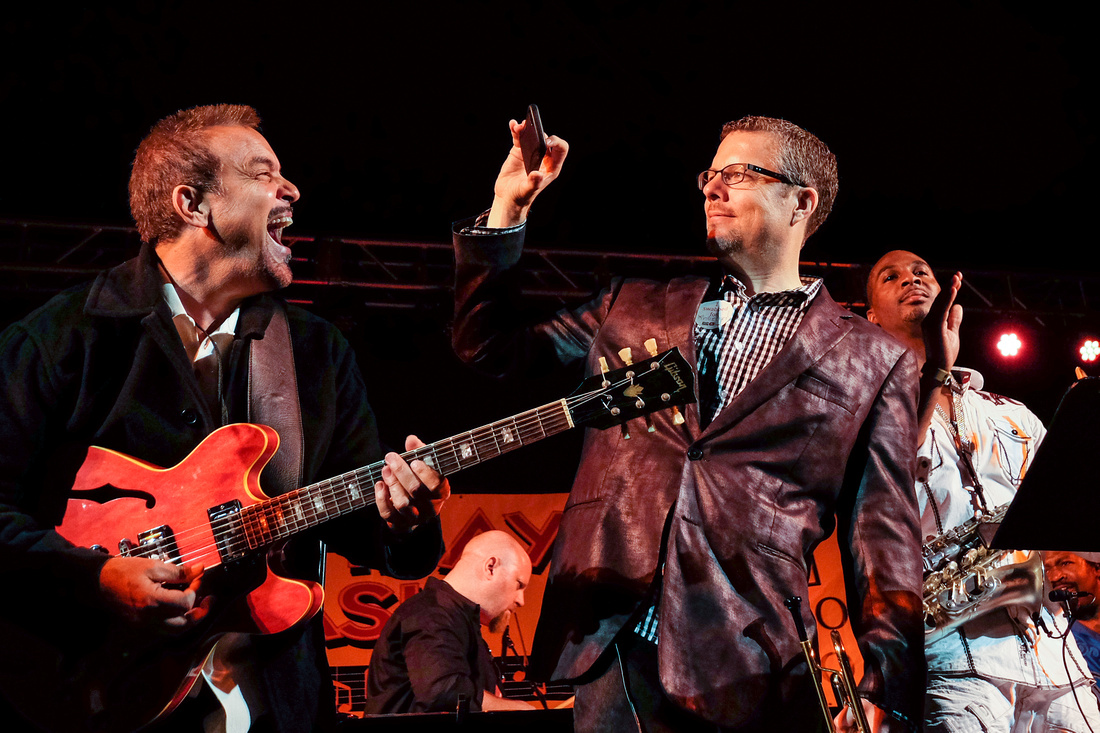 I have no idea what Tony's phone cam photo looks like, but to me, this image is priceless.  It speaks to the joy and friendship among the musicians, KSBR staff, and audience that makes the KSBR Birthday Bash the special day that it always is.  I'm blessed to have this opportunity each year.