The Fuji XT-1 at Calico 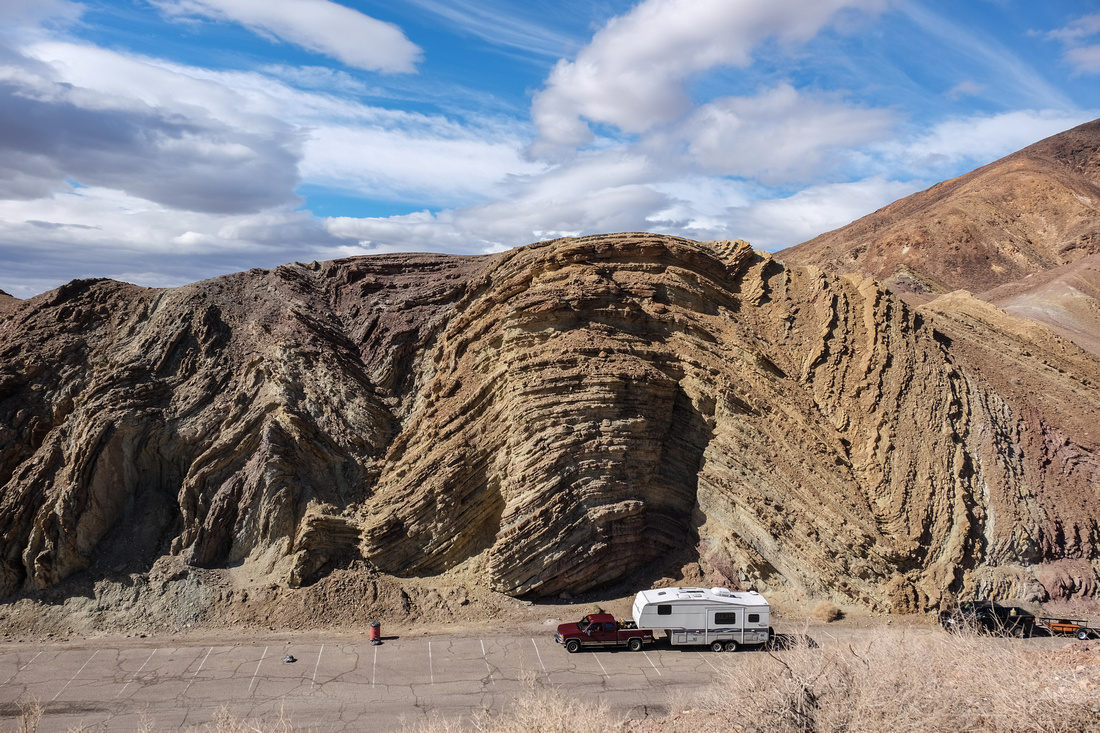 Karen and I took a break from our typical weekend routine and hit the road to the Calico Ghost Town just east of Barstow.  The town had a brief run during the silver boom of the 1880s and 90s, lasting twelve years before it went bust.  Walter Knott bought the town back in the 1950s, and restored many of the old relics, turning it into a sort of low rent Knott's Berry Farm.  Today, the County of San Bernardino operates it as a county park, and they do a pretty good job of maintaining it and offering attractions for visitors from all over.  (Today, there were three buses of South Korean tourists.  How did I know they were from South Korea?  One of them came up to Karen and me and said, "Pleased to meet you.  I am from South Korea!  You are very handsome!")

Anyway, one of the main reasons I wanted to return to this place (hadn't been there since I was a kid) was the incredible geology of the place.  You can see some of the possibilities as you drive out Interstate 15 on your way to Las Vegas.  Exit Ghost Town Rd. and look left up into the hills, and you'll see a melange of different rock formations and colors.  This was probably the sight that enticed the prospectors back in the 19th century.  Today, a better enticement is the fried pickles at Peggy Sue's 1950's Diner, also at the Ghost Town Rd. exit….

But I digress, again.  The formation you see above is located adjacent to the lower parking lot, unused unless Calico is hosting a special event.  I suspect many visitors don't even see it, or if they do, they fail to notice just how amazing this geology is.   I'm certainly no trained geologist, but it's pretty clear what's going on here.  These are layers upon layers of various types of rock, both igneous and sedimentary, folded by incredible tectonic forces.  There are cross-bedded planes, folds in excess of 270 degrees (look to the right of the trailer), and unconformities (areas where the deposits have eroded to nothing, leaving gaps in the geologic record) all over the place.  I don't know what the time scale of this scene is, but I've rarely seen anything as dramatic as this in one concise location.

Back to the visit…One of the main things I wanted to do today was to put my new Fuji XT-1 to the test in a different environment.  I've shot this amazing camera in low-light performance settings, and have been very impressed with the results.  I'll be taking it (and the X100S) to Ireland this summer with the Santa Margarita Catholic High School choir, and will be using it for performances with fast glass, but also general travel purposes, primarily with the very flexible 18-135mm weather-resistant lens.  That gives me about 24-200mm of coverage in one small package, something I'd need two lenses to cover with my Canon 5D3.

During the hour or so we were there, both Karen and I got some nice snaps around town.  It's a tourist place, and while the photos are "fine", they're not something I want to present in detail here.  But there is one portrait I made that I do want to comment on, this gunfighter I captured while he was waiting to be killed for the umpteenth time today.

I like just about everything about this portrait.  First, he's sitting under an overhang, with no direct sunlight.  Ergo, the light is soft yet directional.  There are distinct highlight and shadow sides, but the shadow rotation is gentle, even if his visage isn't.  Though the composition is tight, there are leading lines all over.  The highlighted brim of his hat and the slope of his shoulders all lead the eye to his face, which is the brightest element of the frame.  Though his eyes are in rather deep shadow, there is still meaningful expression on his face, even a Peter Hurley "squinch".  You can't direct this stuff in a quick portrait (I spent maybe 20 seconds with this guy).

When I brought this image into Lightroom, It was okay enough.  I liked the composition a lot (it's what you see here, plus a little door frame to the right, which I cropped out), but he was in shade, so the color tended toward the blue side, and the potential for enhanced characterization wasn't realized straight out of the camera.  Fortunately, these Fuji files are so incredibly malleable and they take loads of adjustments without breaking down.  Here, I have warmed up the image considerably, reduced the highlights significantly and then jacked the clarity and contrast quite a bit.  I've lowered the vibrance and saturation.  There's no noise in this image, no chromatic aberration or halos, and no sharpening has been applied.

The final image is a strong one, one of my favorite portraits that I've made in quite a while.  I'm really looking forward to taking this kit to Ireland later this year.