It's been three months since my last blog post, a time of shooting high school football, some performances, and some commissioned work.  With the month of November, things are heating back up, starting with the second major, international wheelchair tennis tournament in the City of Mission Viejo.  I was lucky enough to be the official photographer for the ITF/NEC Wheelchair Masters tournaments (both singles and doubles) last year, which was an incredible learning experience for me, not so much from a photographic perspective, but rather as a real eye-opener into the world of these incredible athletes.  I was really blessed with the reception my work received last year, and I eagerly accepted the assignment again this year to shoot the UNIQLO Wheelchair Doubles Masters (the singles tourney having previously been committed to another venue).

I'm going to post a continuing report on my experience this year, hopefully keeping up on a daily basis, despite the rigors of all-day shooting and same-day delivery of images to the multiple stakeholders involved in a major tennis tournament.  I'm going to post some representative images, including those I particularly like, as well as those which exemplify themes, perspectives, challenges and opportunities presented during each day's work.

This year's major sponsor is the Japanese clothing retailer UNIQLO, which positions itself in the H&M market segment.  UNIQLO recently opened a new store in the Beverly Center, an enclosed mall in Beverly Hills.  UNIQLO sponsors Shingo Kunieda, a champion player on the wheelchair tennis circuit, and UNIQLO wanted to showcase the sport and Kunieda by creating a small tennis court in the main open space of the mall where Shingo and fellow competitor Michael Jeremiasz of France could have a friendly exhibition.  So, on Monday, the ever-resourceful Mission Viejo staff and UNIQLO PR folks created a small-scale court and the two players went at it.  Since the court was only about 20x40 feet, and surrounded by shoppers and diners, the players hit a soft, spongy ball, and couldn't go all-out as they would on a regulation court.  But it was fun for them and the spectators.

Photographically, it was a mixed bag.  Tight quarters, low available light, and co-existence with video crews made it a challenging assignment.  But everyone played well together and we got some decent images for the City of Mission Viejo, UNIQLO, the Beverly Center, and the players.  I say "we", because I enlisted the help of my wife Karen to get some shots with my Fuji X100S while I worked the Canon gear, bouncing speed lights around in an effort to keep the light out of the players' eyes and out of the video guys' shots.  We shot from down low and up high, on a floor above the court, where there was an opening.  Turns out, Karen got maybe the best shot of the day from up there. 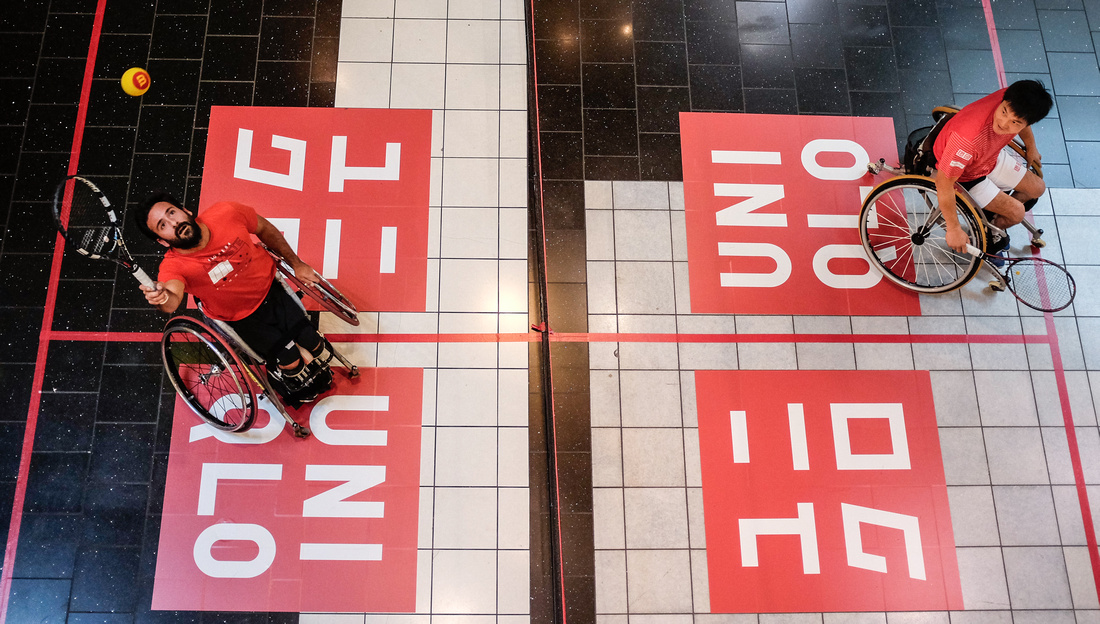 One of the insurmountable challenges presented by this vantage point was the inability to square up the horizontal and vertical lines.  The tile grid and the rectilinear aspects of the UNIQLO logo and court begged for symmetry, but the perspective available from that position prevented us from achieving it.  Photoshop does a good job of bringing horizontal and vertical lines into position, but when you introduce human beings into the math, strange things happen.  But you do the best you can, and keep the players looking natural, perspective control be damned.

Here are a couple of representative shots from the friendly competition.  The shots from the floor level were lit with one speed light bounced off the partial ceiling covering half of the court.  The difference in light levels between the two halves of the court was about two full stops.  In addition, the sunlight gracefully flowing from the skylights high above needed some fill to prevent "raccoon eyes".  The fill from the speed light bounced around the ceiling and off the floor to open up those shadows.  A tricky bit of photon ping pong that fortunately worked.  The shots from the opening above were all illuminated with sun from above.  It helped when the players looked up. 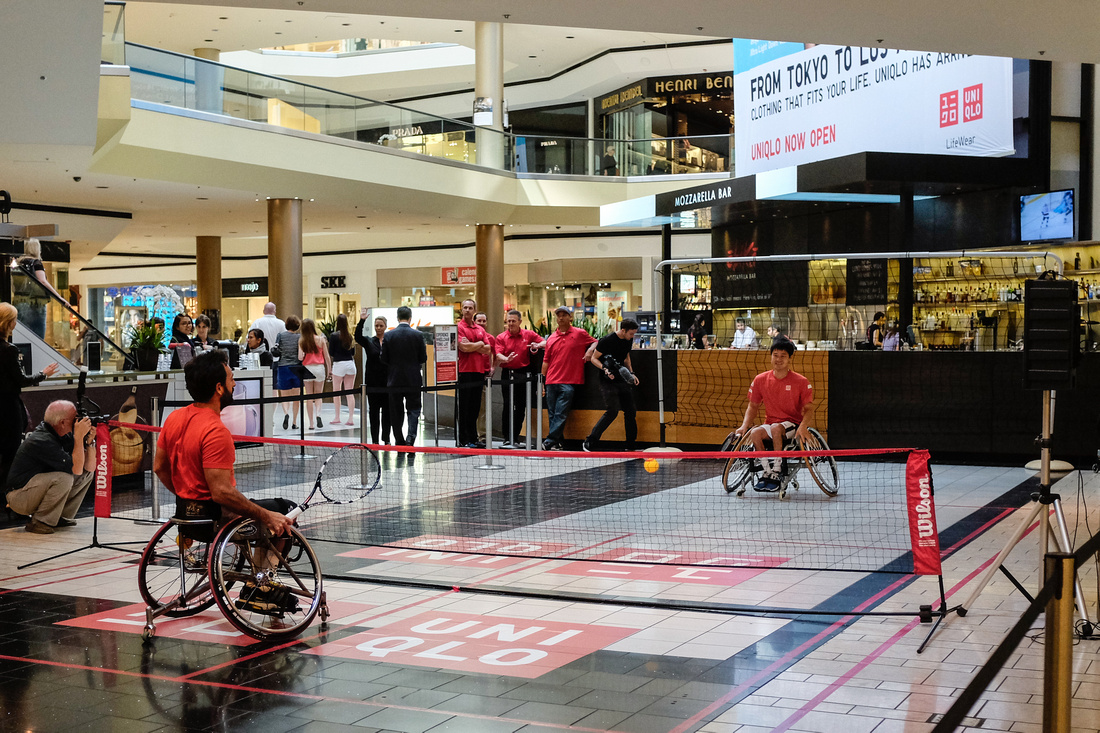 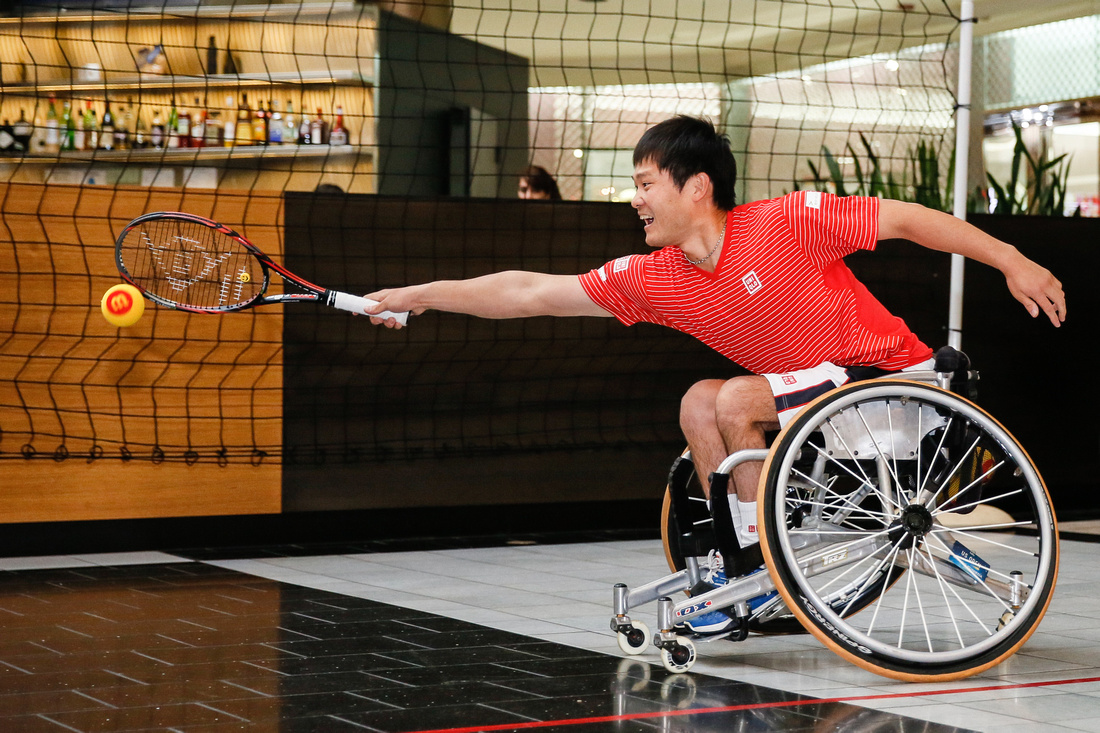 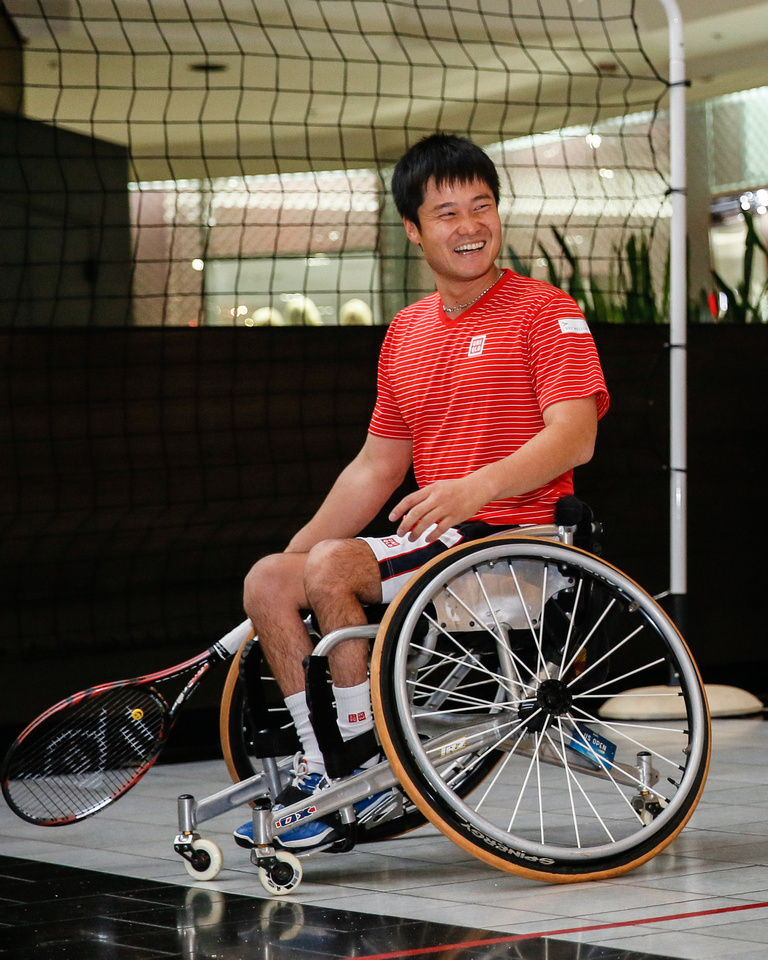 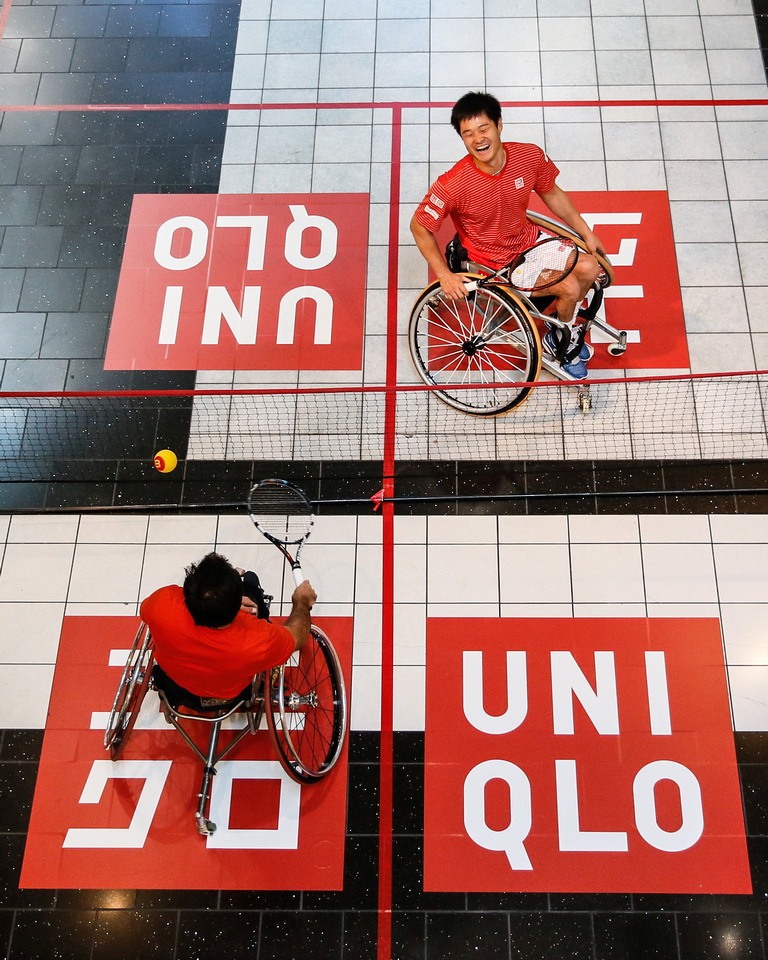 Since it was a media opportunity, I also wanted to get some "behind-the-scenes" shots, showing the crews at work with the players, both on the court and upstairs at the UNIQLO store. 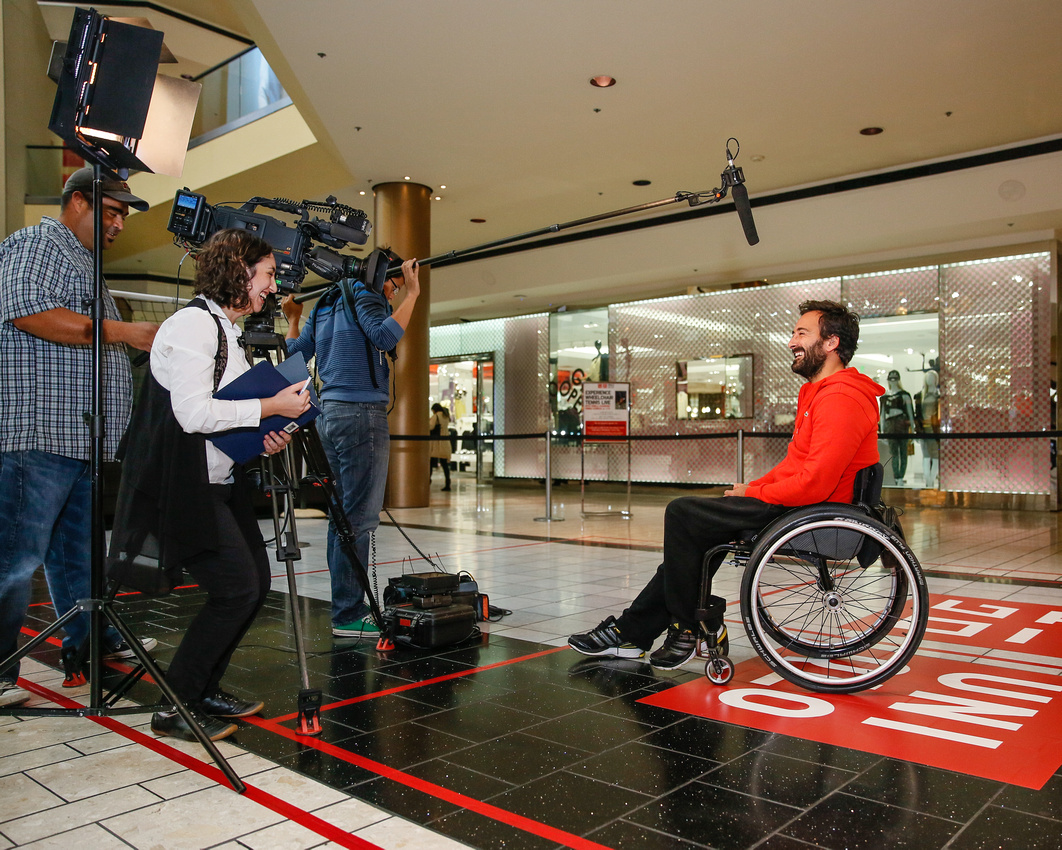 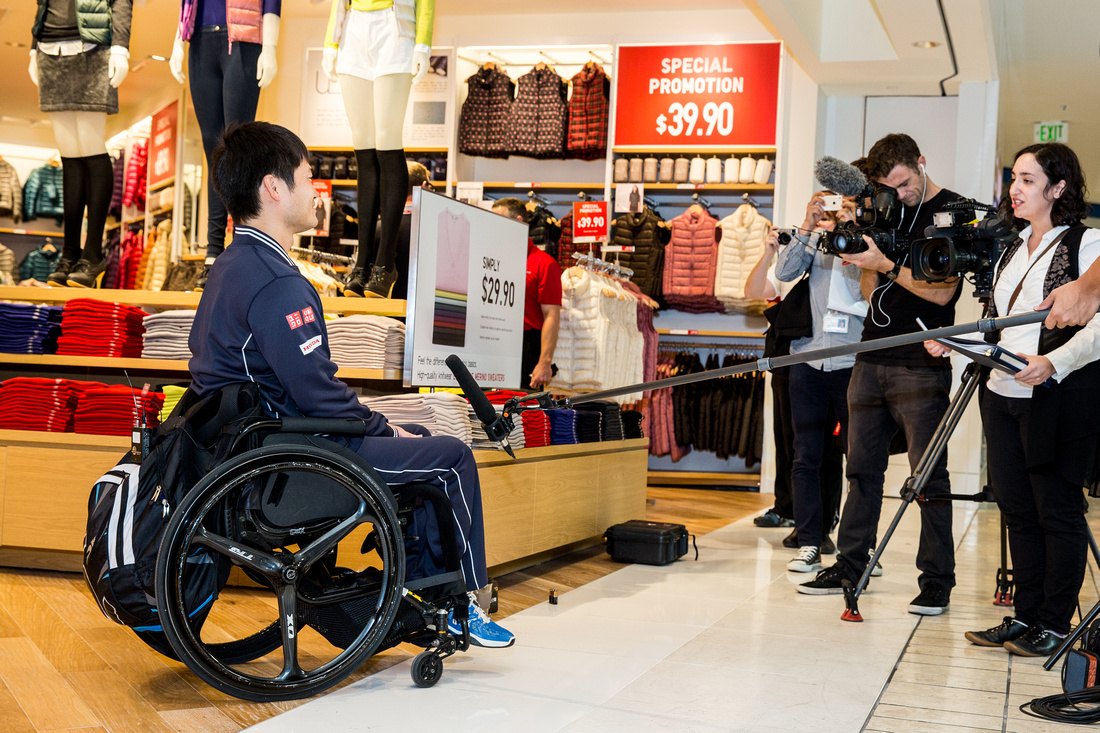 This shot was a bit more difficult than you might imagine.  The interior of the UNIQLO store was lit with sorta-kinda tungsten-esque light, leaving a moderately yellow cast, while the store opening, where this shot was staged, was bathed in diffused skylight. So there was really no way to balance out the different color temperatures with a gelled speed light.  So you choose the battle you can win; in this case, by letting the store light go where it will, and focus your strategy on rendering the people accurately.

I wanted to end up with a singular image of Kunieda with an element of the UNIQLO brand.  Fortunately, at the very end of the short interview with him, he gave us this.  It's all ambient light from the diffused skylight above the store. 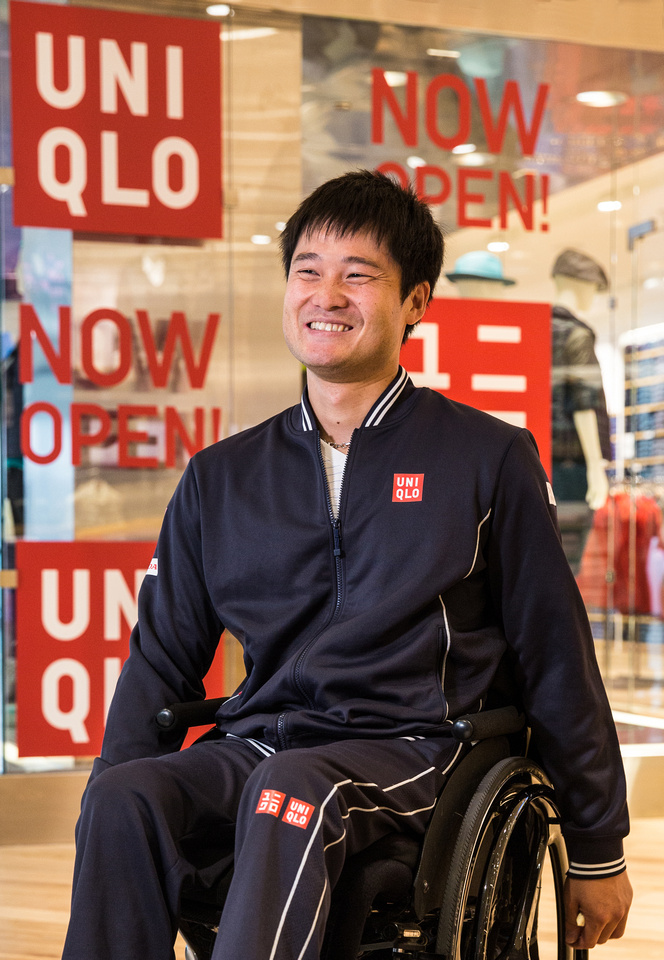 On Tuesday evening, the "draw party" is held, during which a nice dinner is served and the players learn the order of the matches, which begin on Wednesday morning.

Well, the plan for a daily update to this blog post quickly went into the toilet.  Shoulda known that with nightly delivery of images for the City of Mission Viejo, the ITF, and sponsors, my days ended around 2:00 a.m. or later each night.  Then, after the close of this wonderful event, I transitioned back to my other assignments.  So here we are, eight days after the close of the tournament, with all responsibilities completed.  How to describe the tournament, from a photographer's perspective, in a different way than last year's post?

Last year, I had certain goals in mind for my coverage, including showing action, showcasing sponsors, showing emotion, getting the jubilation of victory, etc.  Fortunately, I was able to accomplish all of these goals.  The first goal I set out for myself this year centered on one specific athlete, Great Britain's Jordanne Whiley, current doubles champion with her partner Yui Kamiji of Japan.  Why Jordanne?  I recently saw a video telling Jordanne's story, beginning with her brittle bone condition, which has resulted in 26 breaks of her legs and eight surgeries to install rods, pins, and other hardware.  Yet she's as strong as they come.  I wanted to show that strength and perseverance.  My first impression was to try to spend a few minutes with Jordanne, away from the competition, under favorable lighting conditions, and make a portrait showing her drive and intensity via a portrait of her face.  But I didn't want to take her away from her main goal, to win the tournament, and I didn't want to try to force an expression that wasn't real.

Fortunately, during one of her early matches, I watched her serve routine and saw that at one specific point of her serve all of the traits that I had hoped to create in a set piece.  A little post-processing to focus the viewer's eye and I had it.  I was gratified to hear from Jordanne that in her opinion it was the best tennis photo ever made of her. 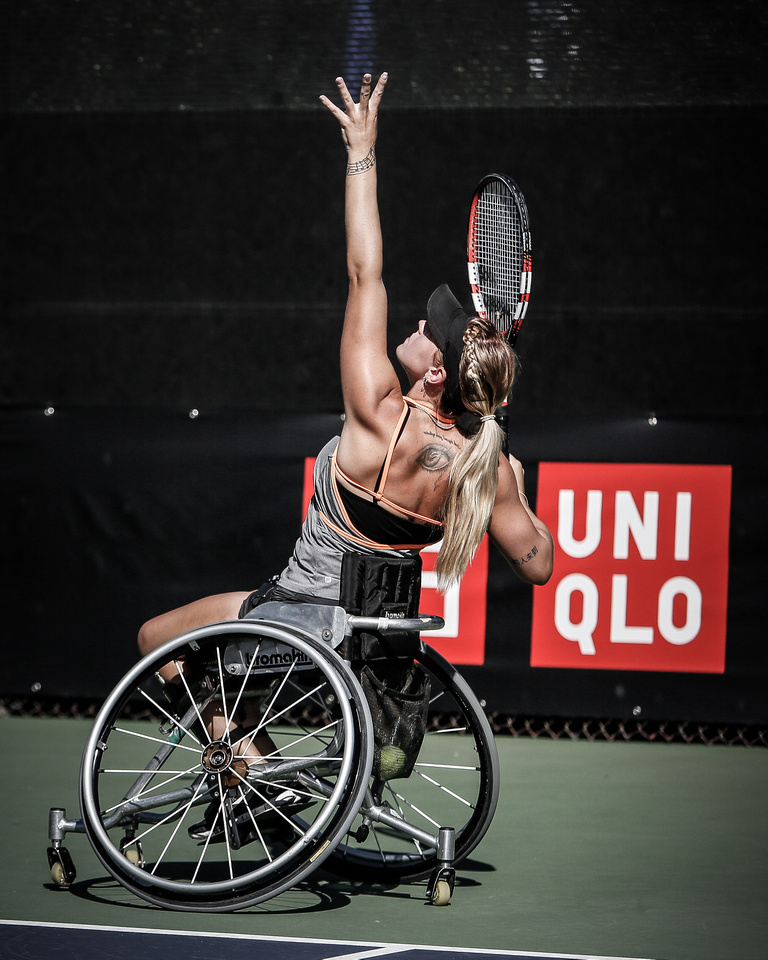 Covering a multi-day tennis tournament naturally involves getting a lot of captures.  After all, you can't wait for the photo to reveal itself; you have to anticipate it and get it as it happens.  So that means thousands of photos a day.  But when you think about it, there are not all that many distinctly different moves a tennis player makes.  There's the forehand, the backhand, the overhead volley, the reach, the serve, the "ball in your face or at your feet" reaction, the charge to the net, the passing shot, and maybe a few more.  So what changes?  Sometimes, not much other than the backdrop or the wardrobe, as seen below.

First up, Germany's Sabine Ellerbrock, who, by the way, was near death's door just three weeks before the tournament.  She's a fierce competitor who has a somewhat more contemplative perspective these days on the curative powers of athletic competition. 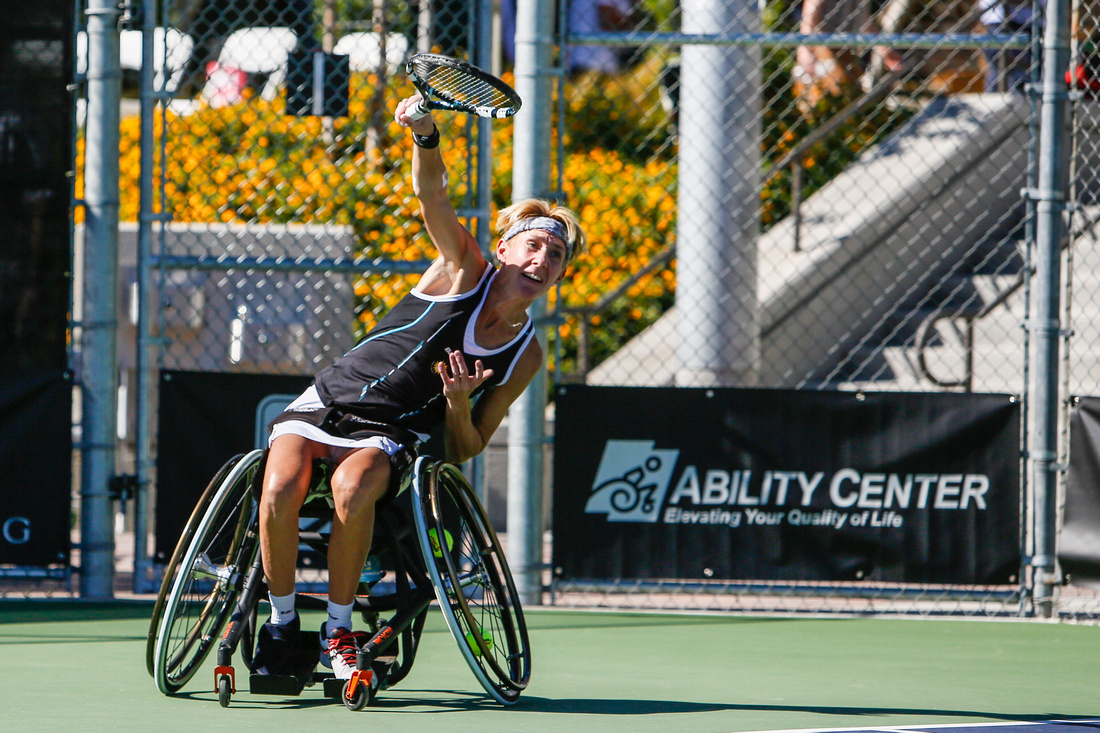 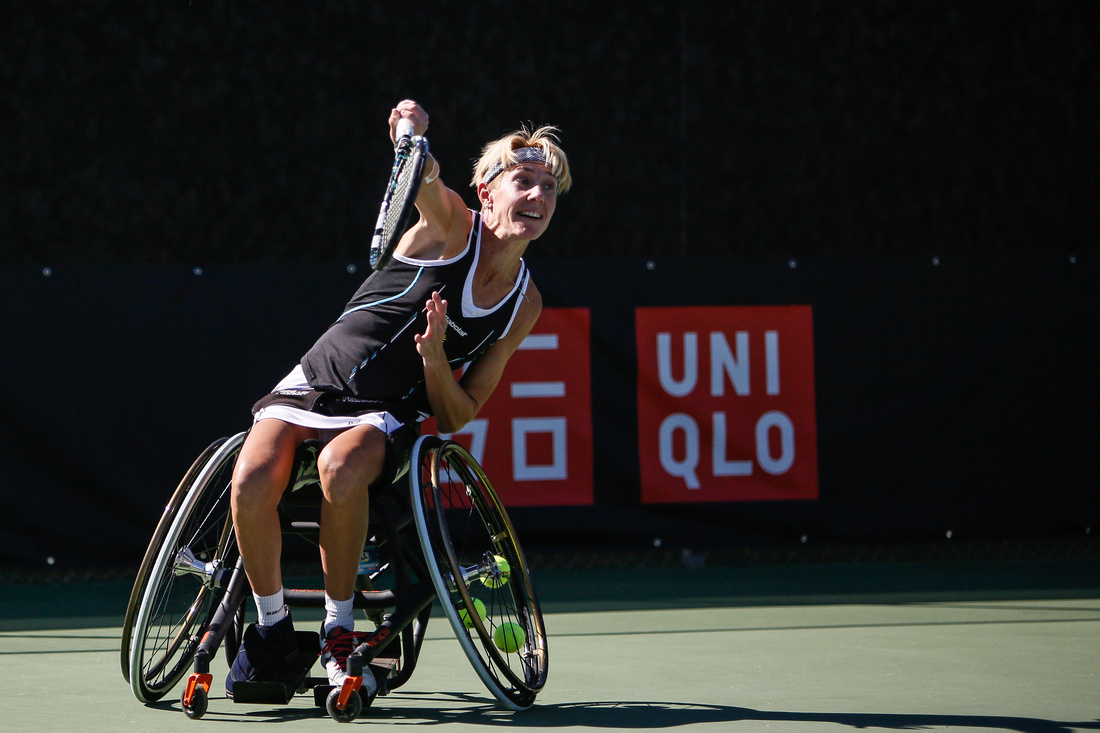 Here's the Netherlands' Marjolein Buis, who with her partner Michaela Spaanstra, lost in an epic semi-final match to Louise Hunt and Katharina Kruger.  These are not consecutive frames, or even the same play.  Maybe I should have kept only one... 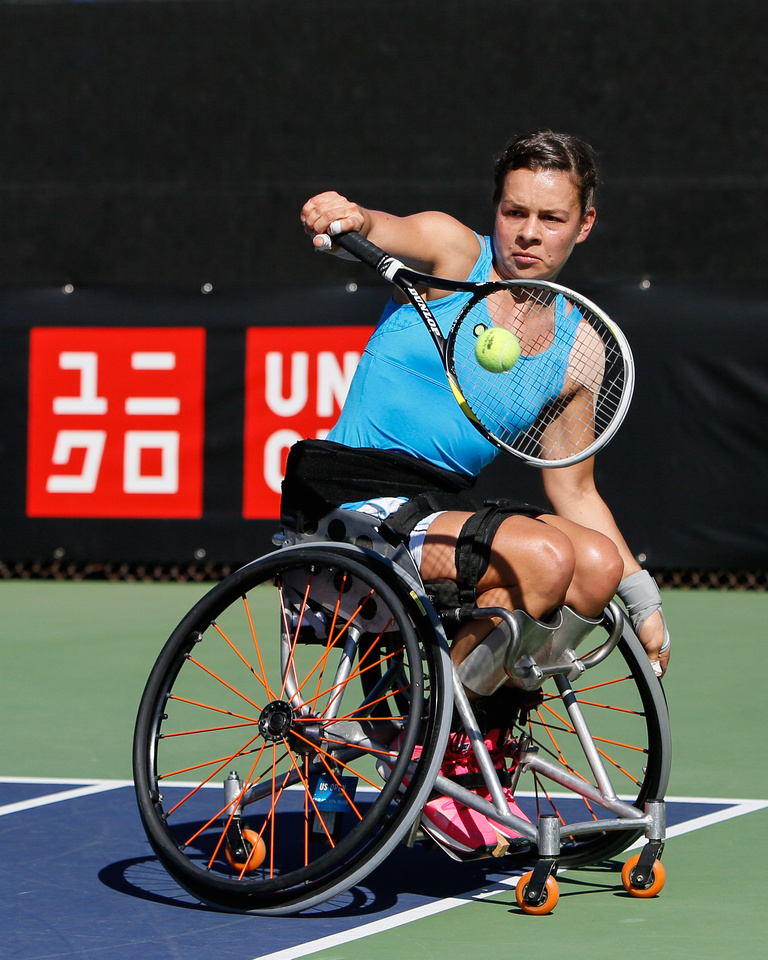 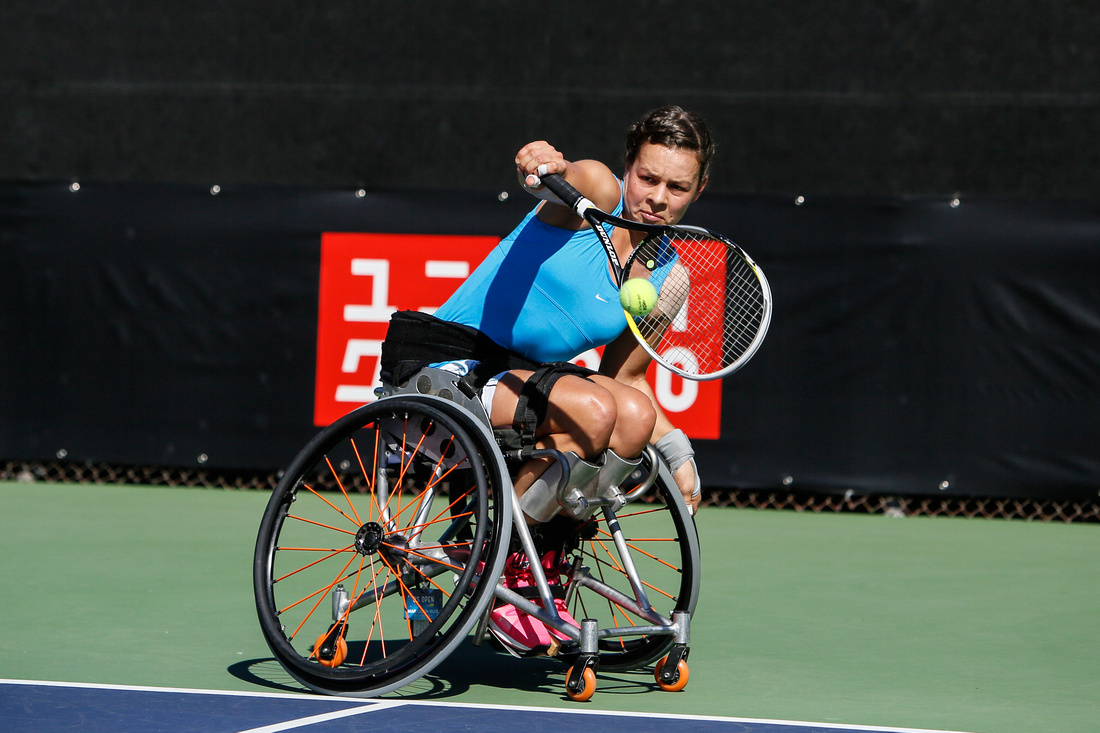 South Africa's Evans Maripa was paired with Japan's Shingo Kunieda.  It is Evans' first year on the tour, and though the pair didn't fare well, Evans showed his talent and competitive drive.  Only his shirt changed. 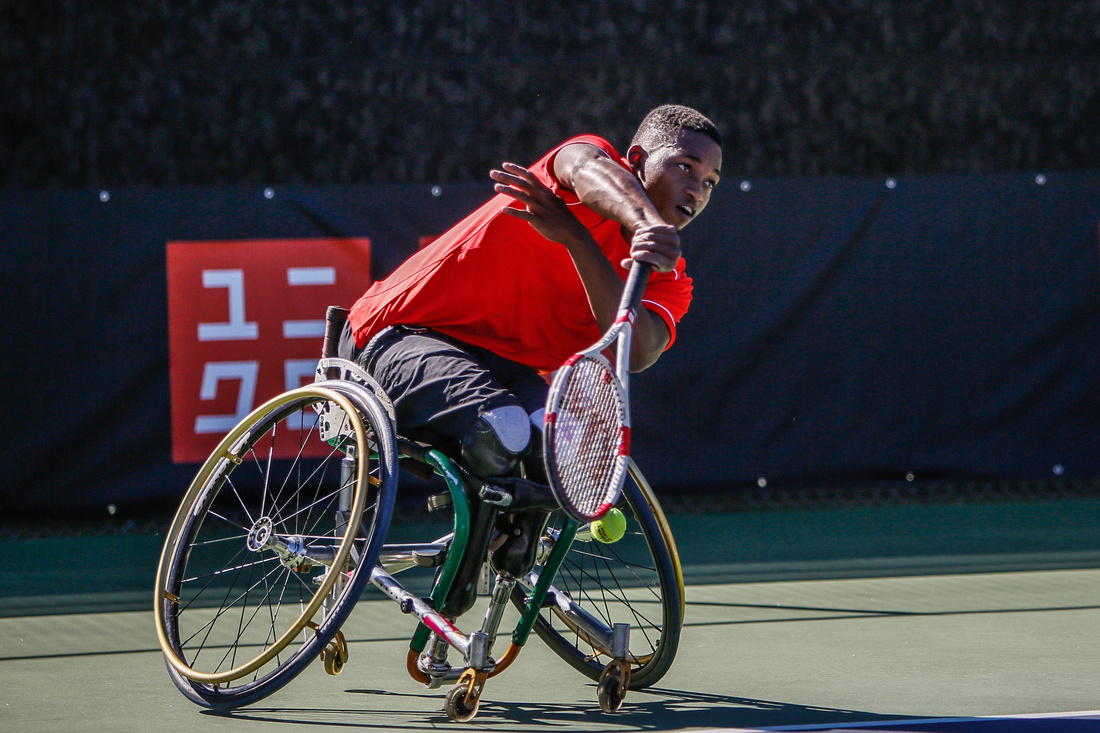 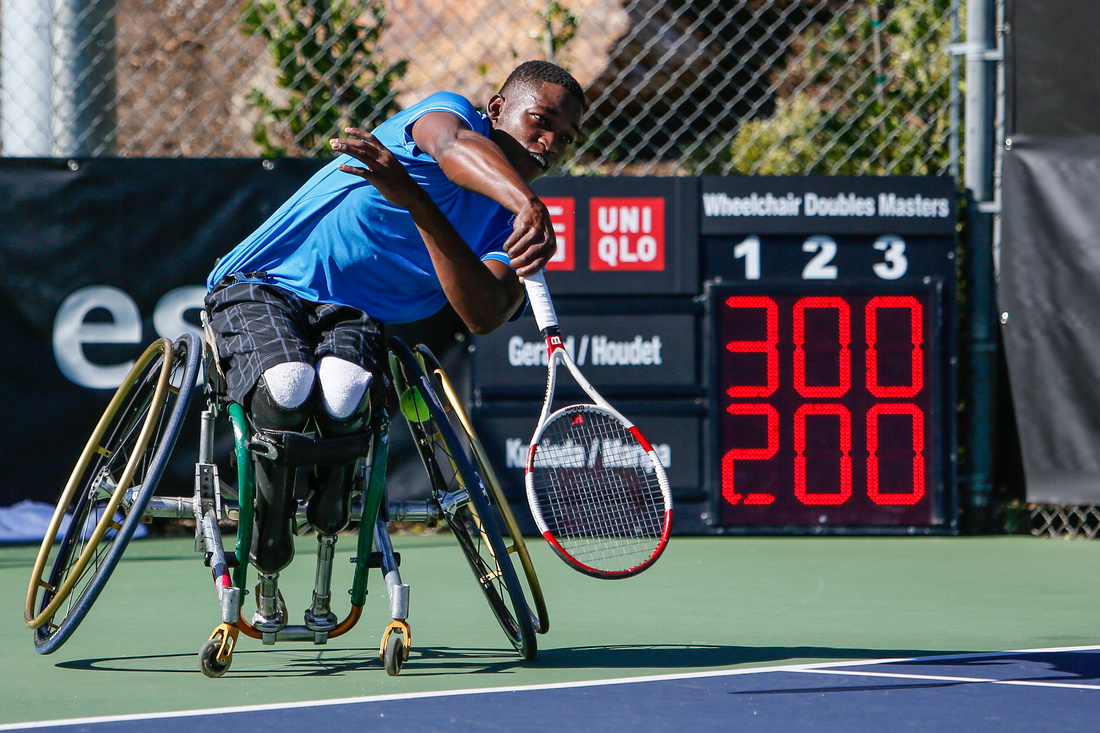 One of the more fascinating photographic experiences is capturing the occasional spill.  As I've said before, these athletes are fearless, and head-first crashes into the fence while chasing a ball are fairly common.  They can be frightening to watch, but fortunately, most of the players recover quickly and get right back to the match.  But they do provide some interesting photographs.

Here's Stephen Welch, from Ft. Worth, Texas, who plays in a chair without a small rear wheel that prevents backward spills just like this one. 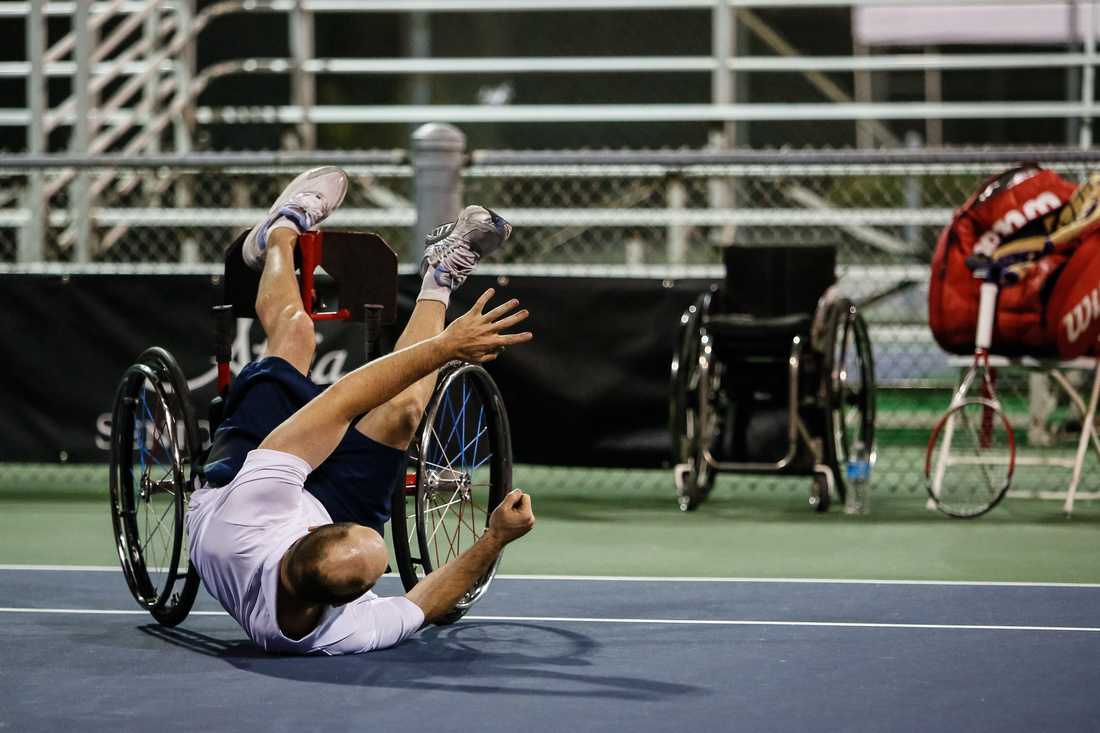 Great Britain's David Phillipson goes into the fence, fortunately stopping just before crashing into a pile of wheelchairs and equipment.  The girls on the left see the carnage about to happen.  Predictably, there's one young lady who can't get her face out of her smartphone. 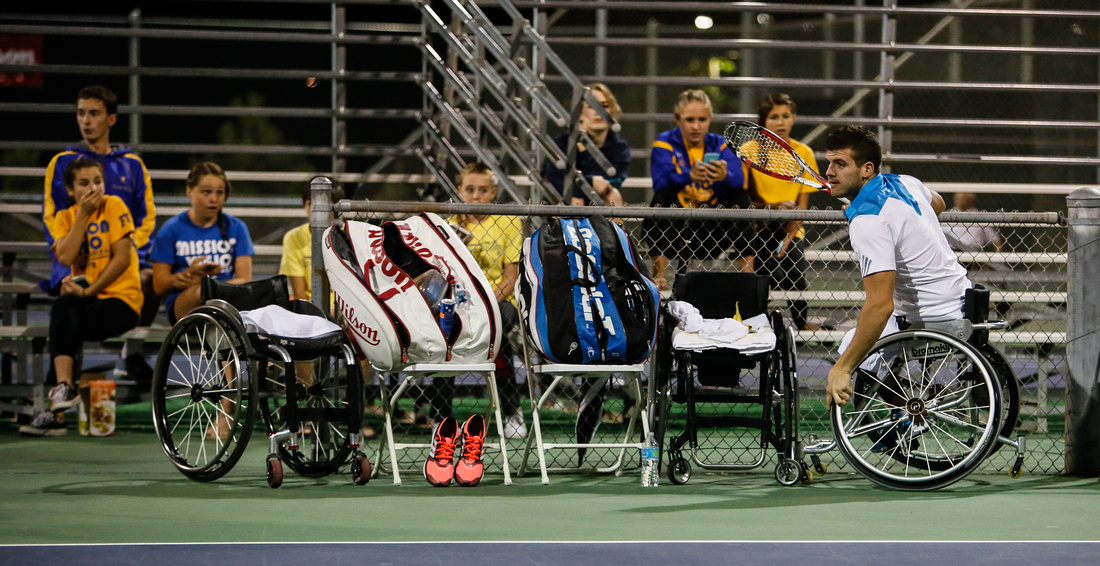 Sometimes the most drastic-looking crashes are the least impactful, at least on the outside.  Here's Belgium's Joaquim Gerard after hitting the fence hard and spilling. 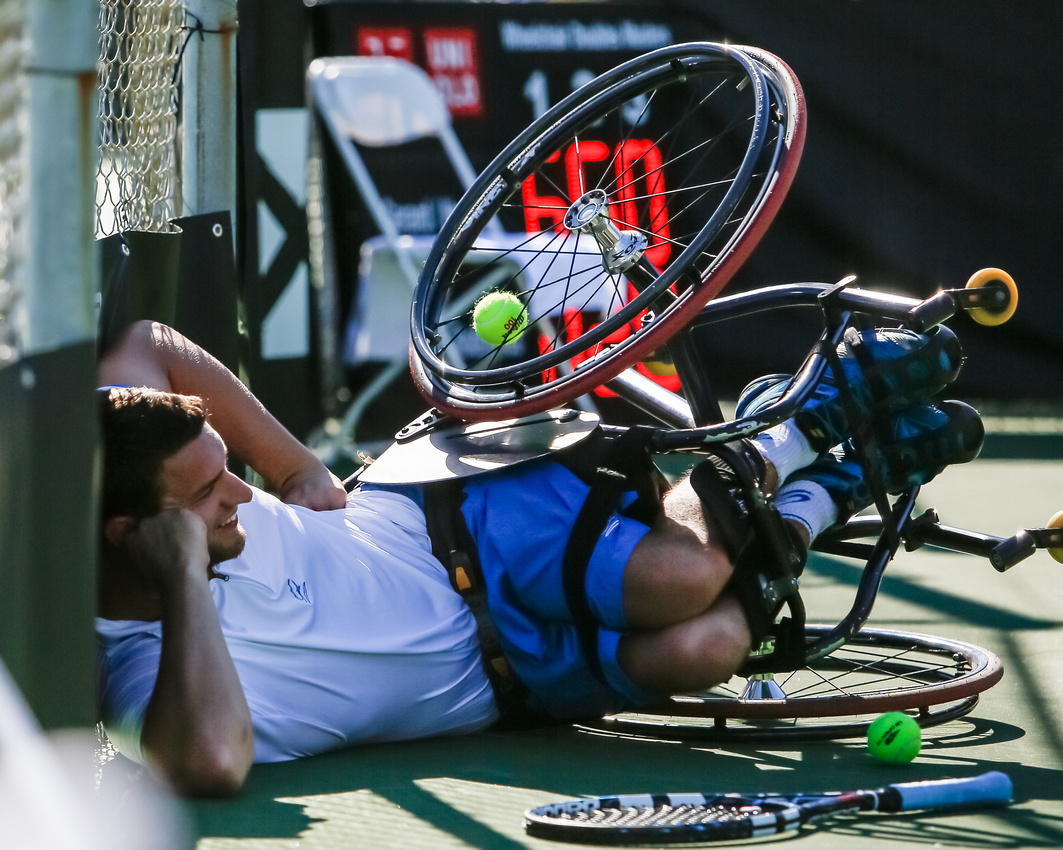 At other times, a spill does result in injury.  Argentina's Gustavo Fernandez hit the fence and got his hand stuck, ripping a nasty cut. 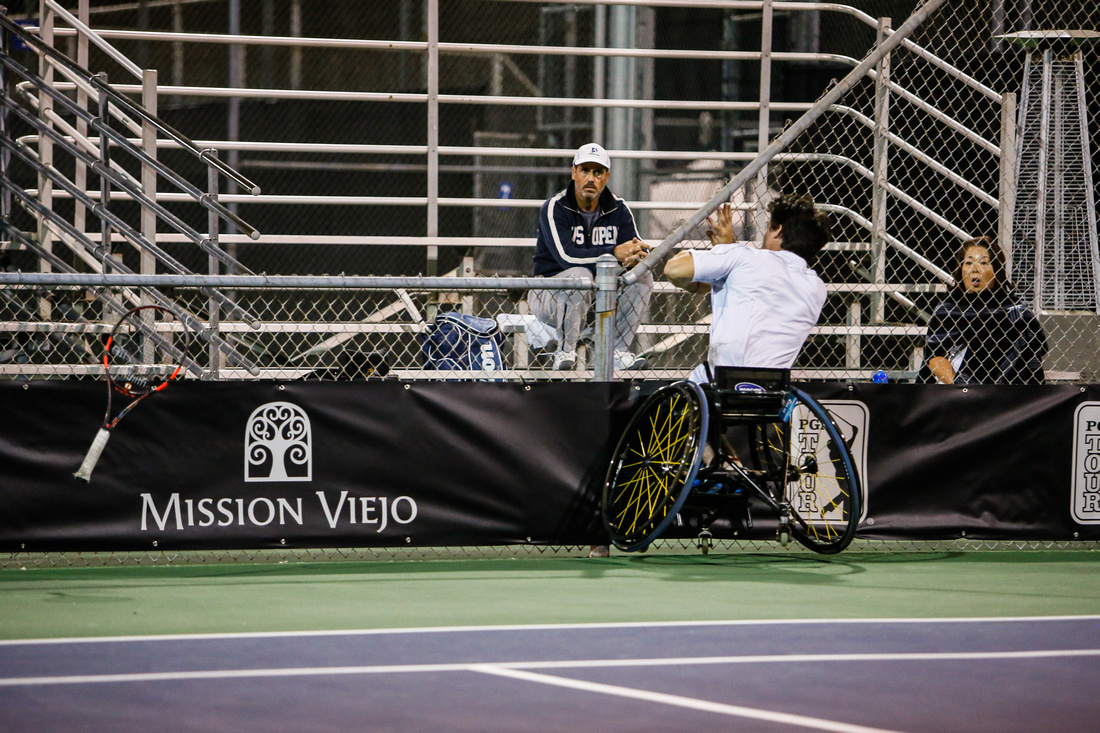 At the end of the day, at least for me, the most interesting photographs are those that portray the intensity, the competitive spirit, the stories, and the joy of competing among these athletes.  Their expressions tell their stories, so I look for them and am drawn most intently on those that are unique to each individual. 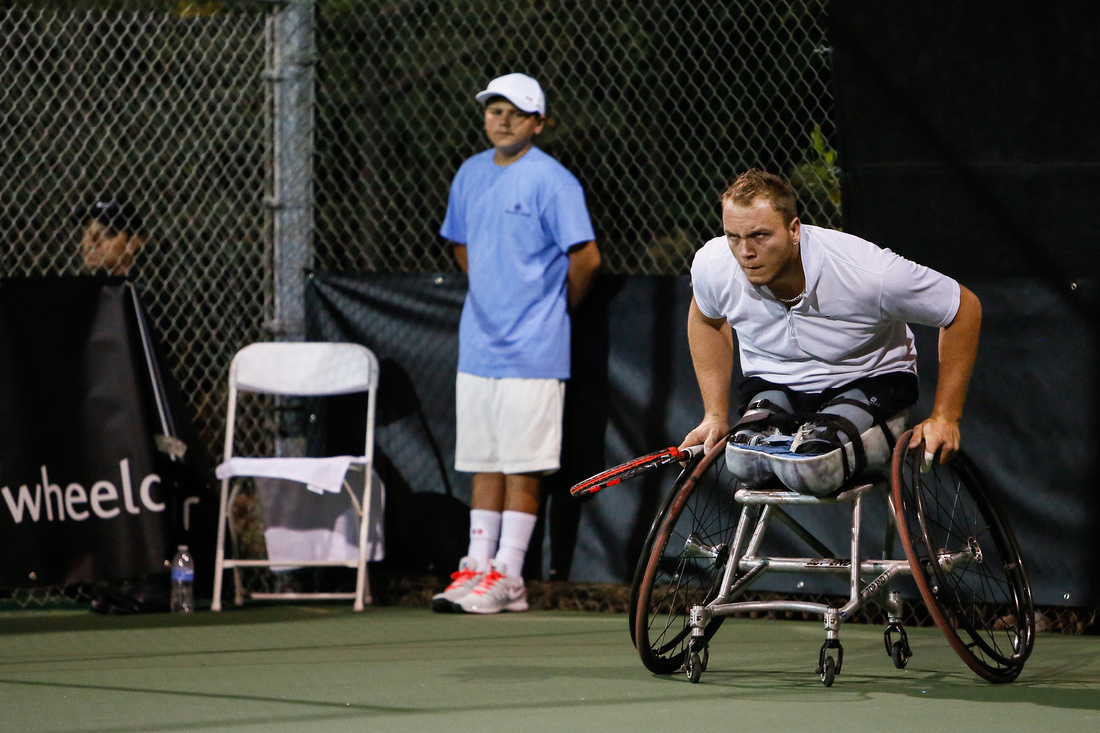 France's Michael Jeremiasz, one of the more colorful, as well as talented, pros on the tour. 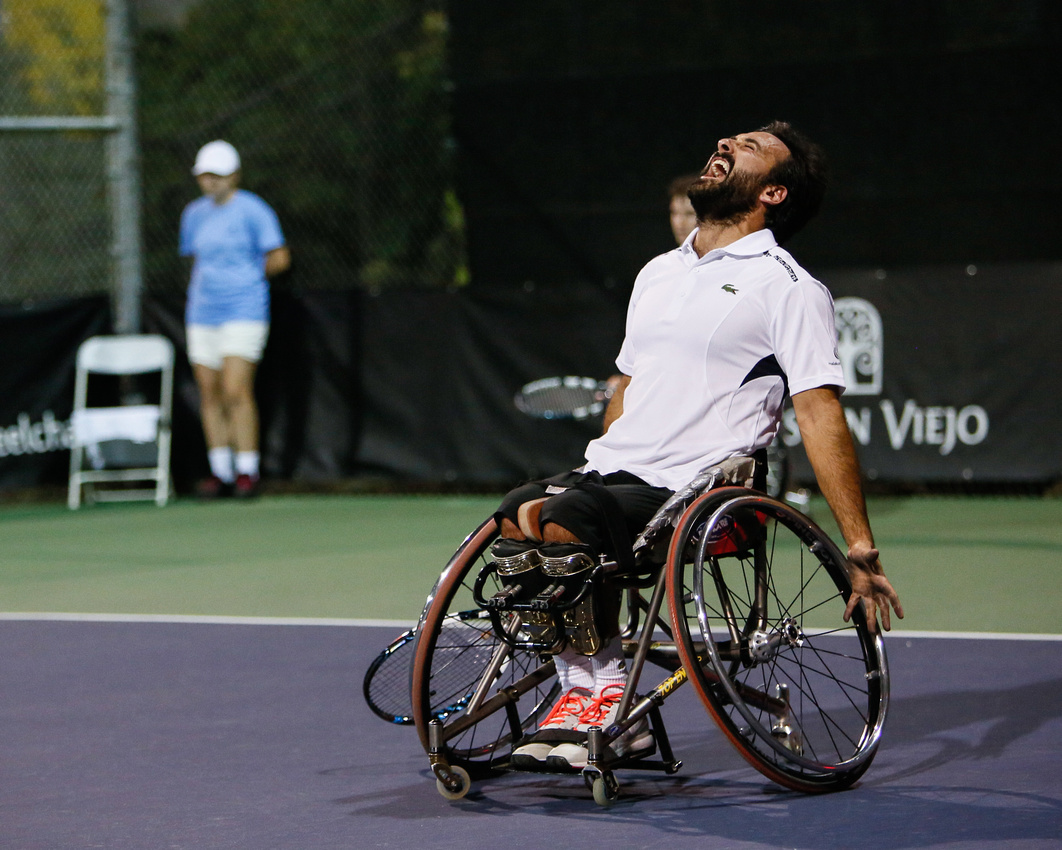 Great Britain's Andy Lapthorne, who exhibits the full range of emotions and intensity on the court. 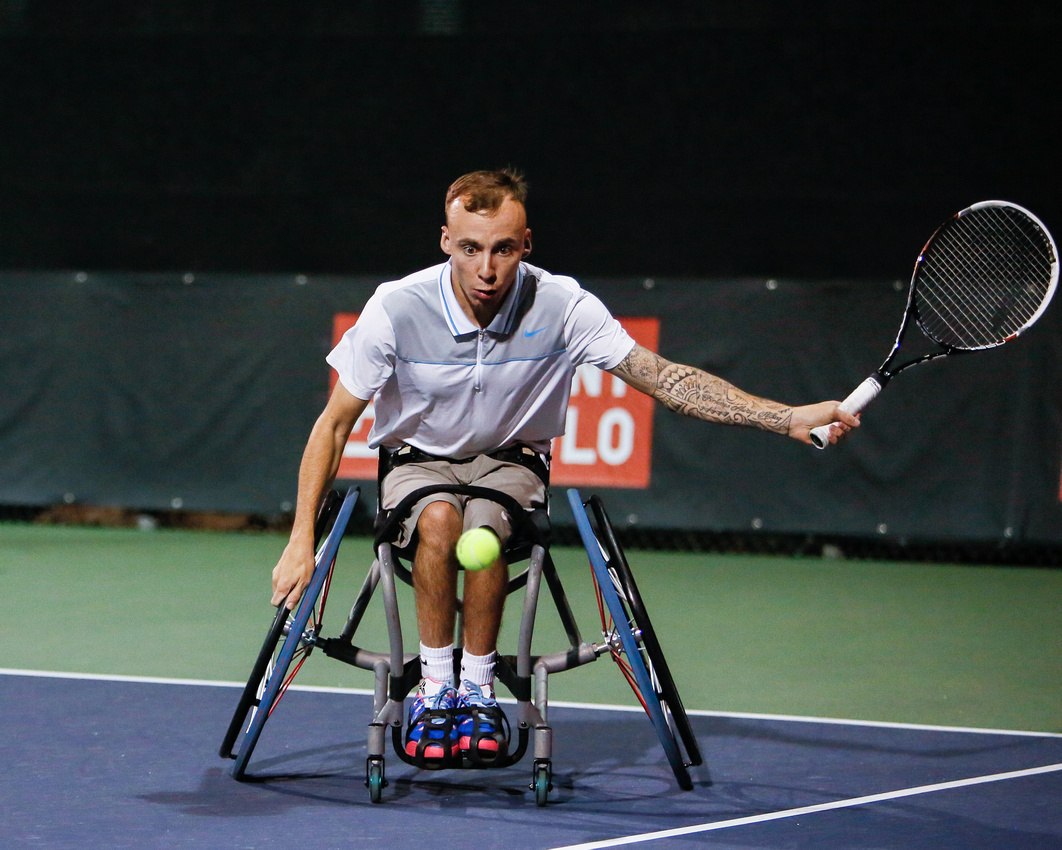 David Buck, who looks like he's about to munch into the ball. Reigning quad doubles champion Nick Taylor, usually an implacable force on the court, really getting into this forehand volley. 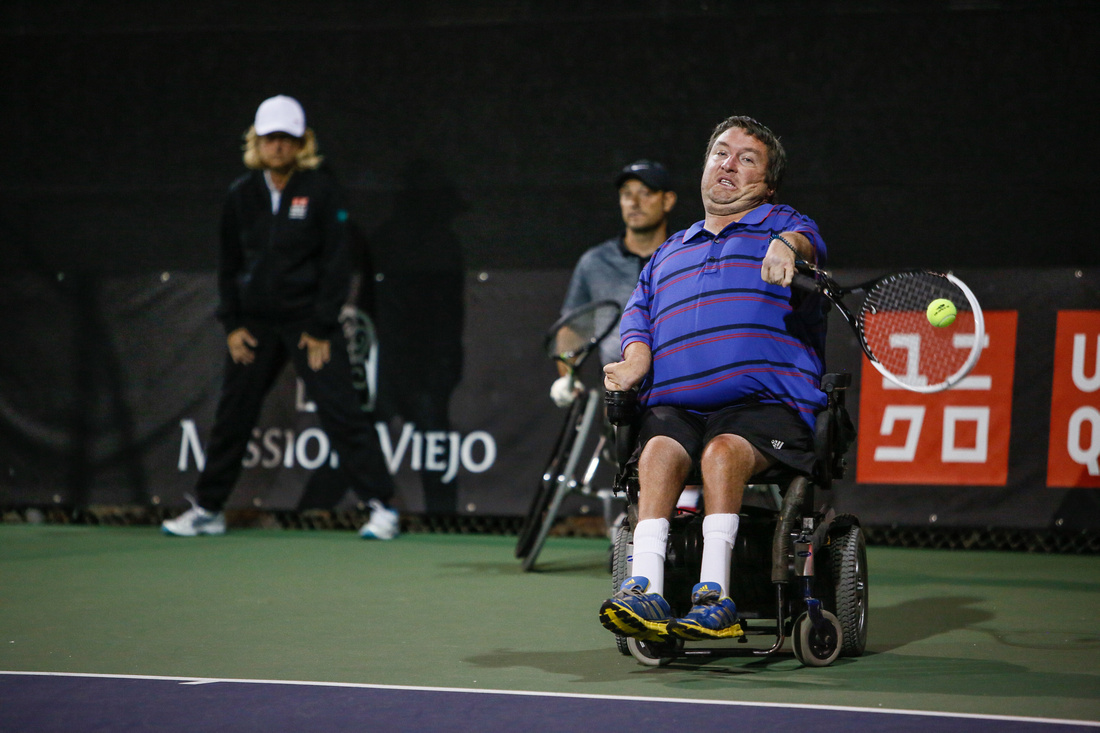 Germany's Katharina Kruger.  Katharina is a joy to be around, and a joy to photograph.  The main reason? You know how faces usually look when the  person squints in the sun, or during intense activity?  The face usually pinches up.  But Katharina's face goes into this great smile.  You have to try hard to take a bad picture of Katharina Kruger. 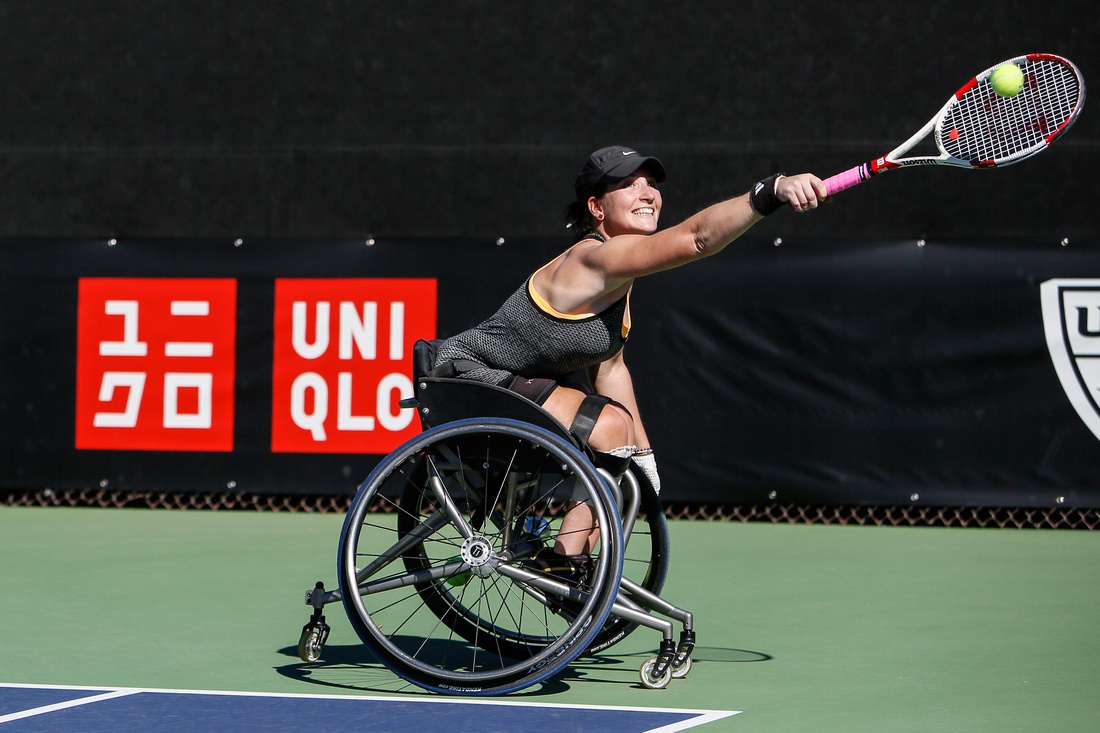 And then there's Stephen Welch.  You can't plan for this stuff; you just have to be ready for it. 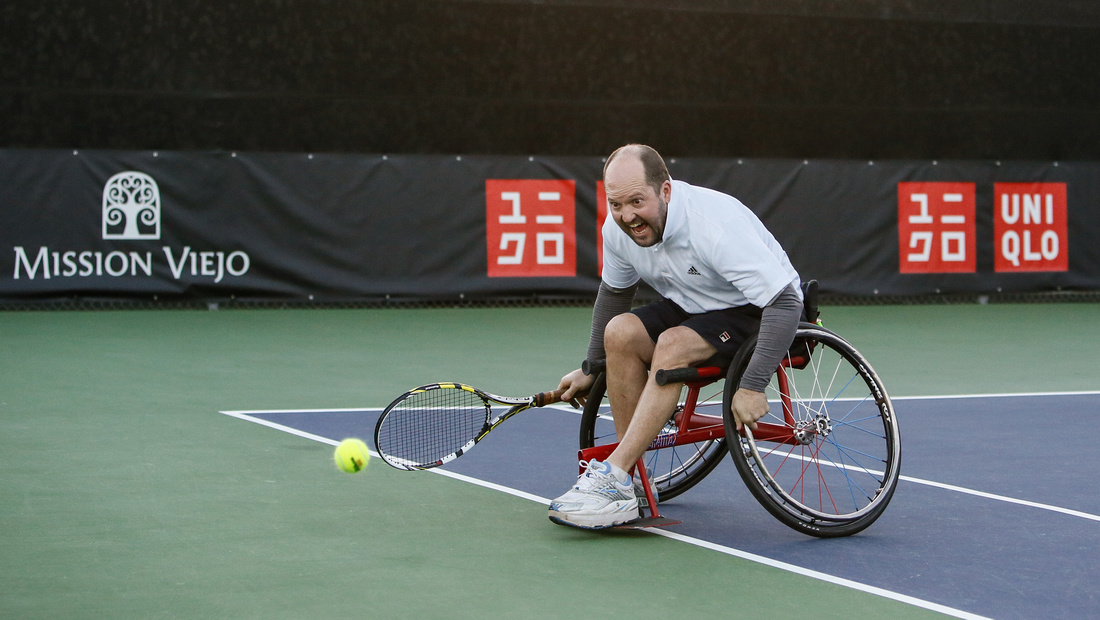 And finally, David Phillipson, reaching vainly for a lob over his head. 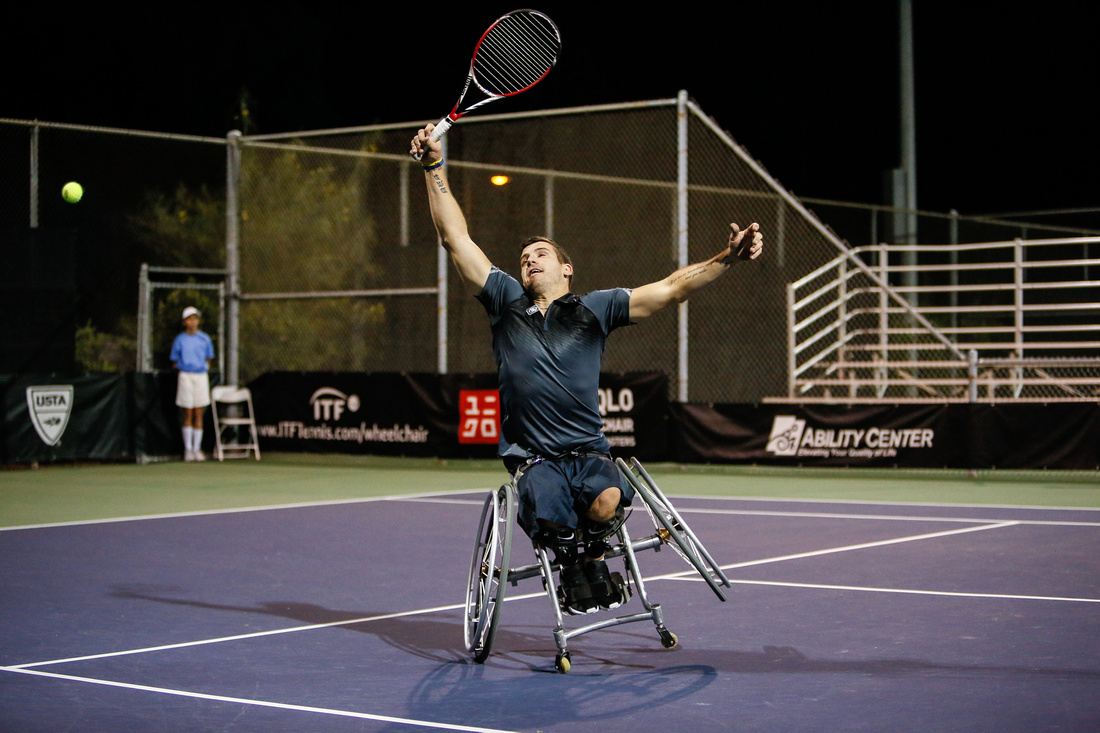 My heartfelt thanks go to Steve Bell, Jason Harnett, and Brian Gruner, who along with a large contingent of City staff, many of whom volunteered their time, put on a fantastic tournament.  I sincerely hope the tour comes back to Mission Viejo next year. 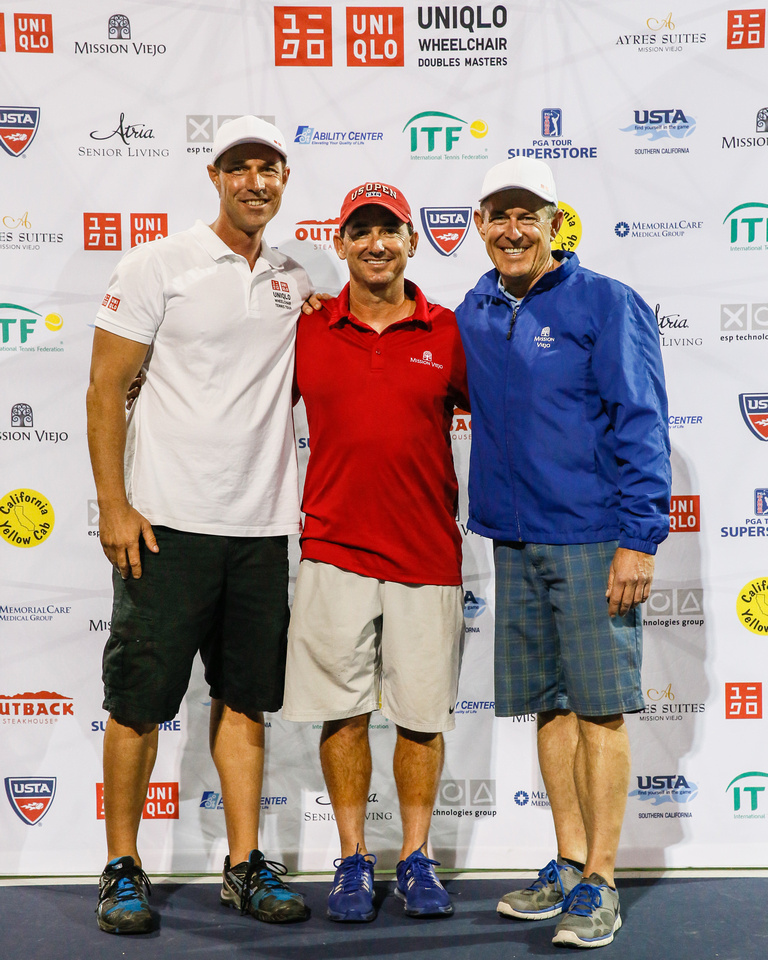