As I sat down to write a blog post on our weekend getaway to Cambria on the Central Coast, I had in mind a short piece on traveling light, with just the Fuji X100S.  This, after lugging around 25 pounds of essential (I think…) gear from London to Paris to Rome with a wonderful choir last month. But the Cambria weekend blog post kinda got hijacked by the story of the severe water crisis in this idyllic community and what the they are (or aren't) doing about it.  See below for that screed.  So this piece is the one I had in mind, minus the water rant.

One of the few things I regretted about the Europe choir tour was the lack of time to really focus on travel photography.  Touring with 260 people ties you to an unrelenting schedule, and that's not conducive to photography.  But a leisurely weekend, combing the beach, gave me an opportunity to try some things I hadn't really had time to do with this amazing little camera.  So Karen and I strolled Moonstone Beach on a late Saturday afternoon, and on Sunday, while she slept, I got up early and tried some different things again.  Here are a few takeaways. 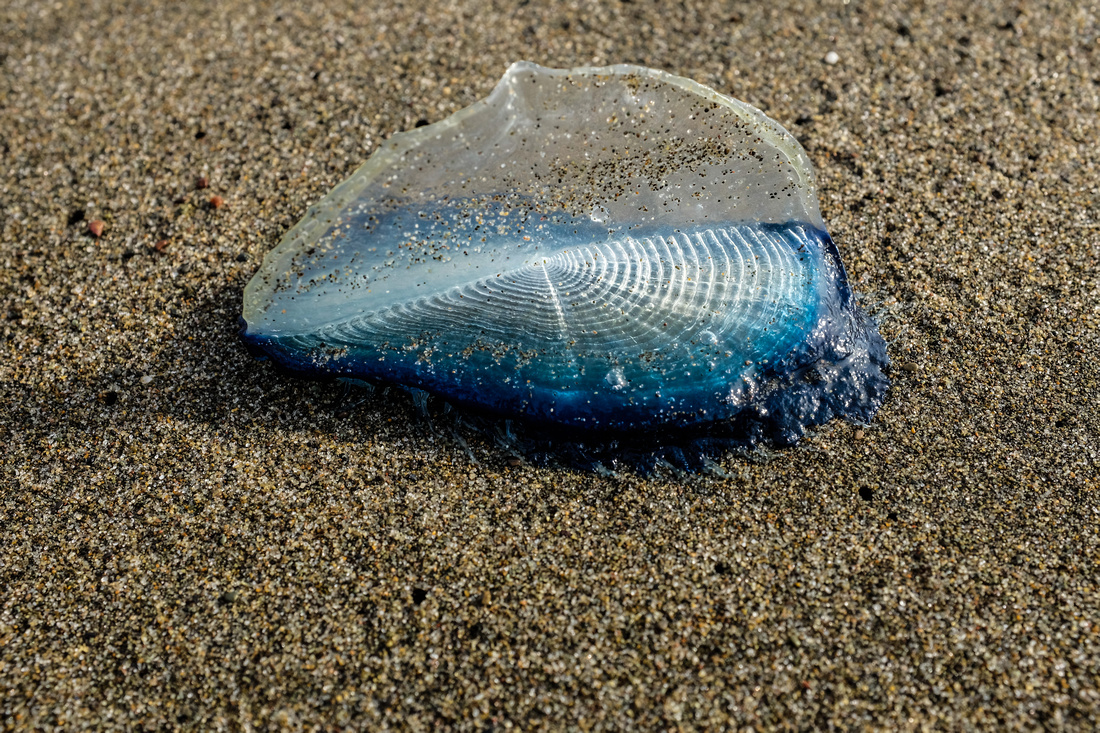 This little thing was a total mystery to me.  I first saw one, then another, and another, dried up on the beach.  In a dried condition, they looked like clear, twisted up plastic drink lids.  But fresh out of the ocean, they revealed deep, iridescent blue hues and textures.  I learned that they are a very small species of jellyfish, with the blue underside and the clear "fin" which protrudes above the water and acts like a sail.  This specimen is about three inches in diameter.  The photo attests to the incredible detail and macro capability of the X100S.  The shot was made from about six inches away, and is pretty much straight out of the camera.

One of the things that really impresses me about these Fuji files is their ability to handle significant amounts of clarity and contrast without breaking down.  I rarely make any adjustments to saturation, and when I do, it's always a reduction.  This might be my first photo with saturation added, to bring out and intensify the various colors of these tiny beach stones.  And you can pixel-peep all you want and you won't find artifacts, chromatic aberration, or fringing of any kind.

Likewise with this "still life" of more or less fresh kelp. 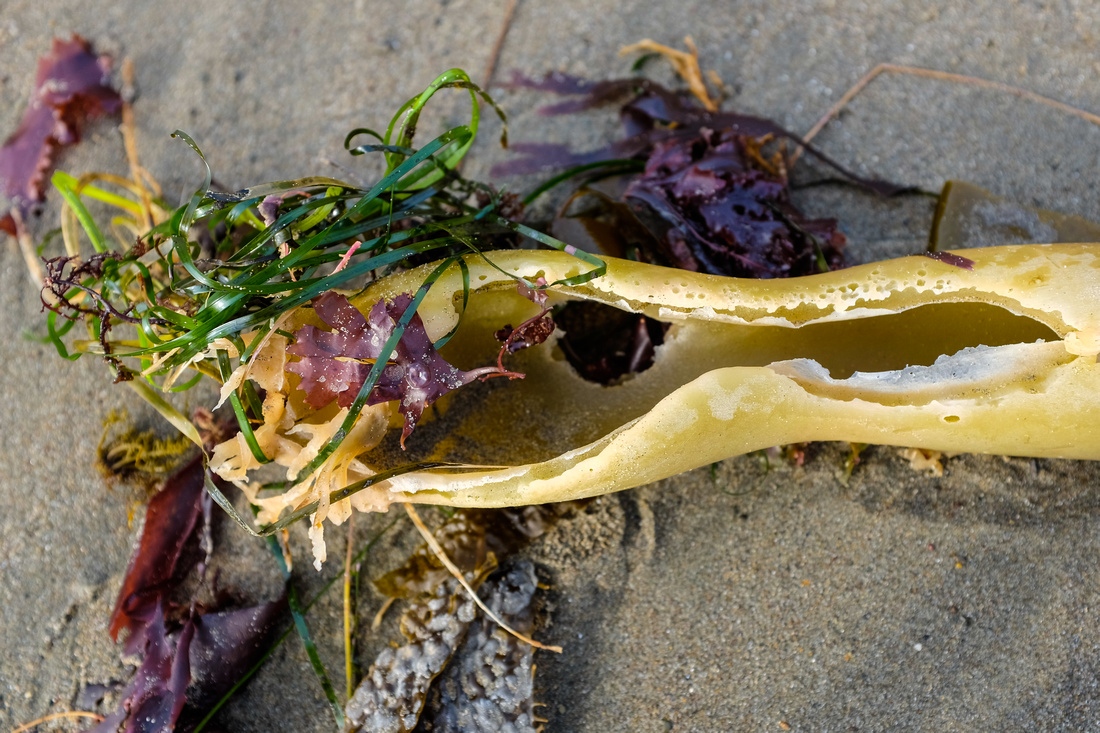 Adding clarity, contrast and saturation really brings out the colors of these marine plants, and makes them look like they were just deposited onto the beach.

So if it works in these close-up shots, how about a landscape (or seascape)? 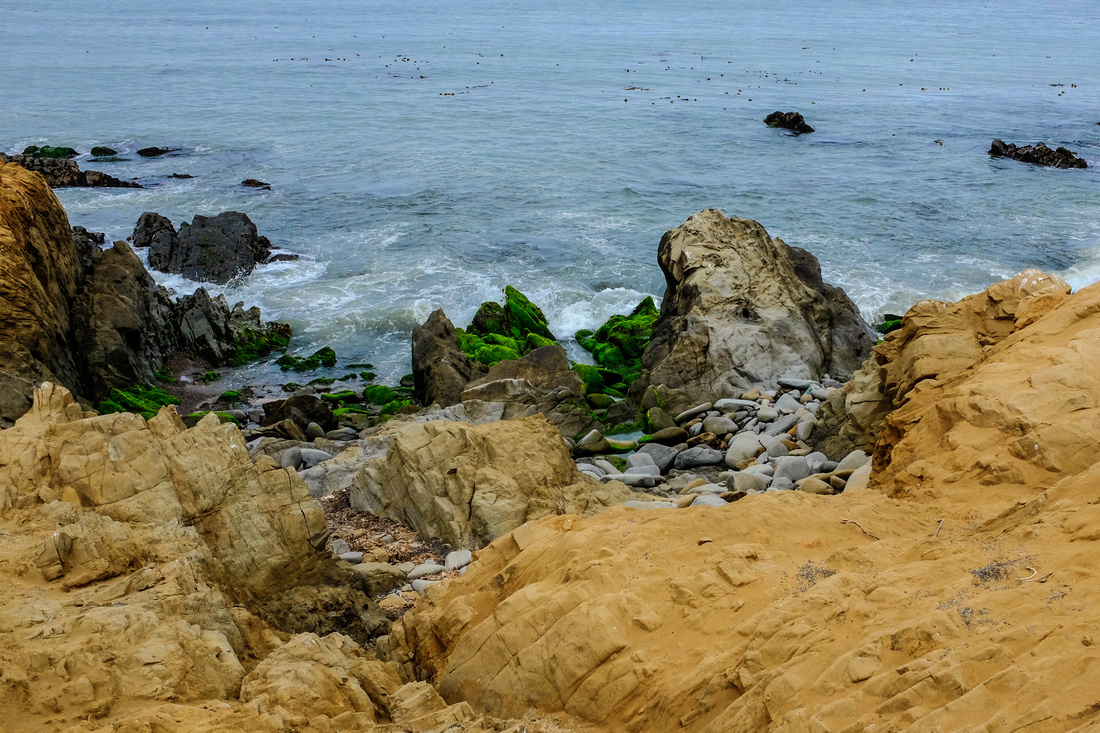 What initially attracted me in this scene was the intense color of the green moss on the rocks in the center of the frame.  Unable to get down onto the rocks, and limited by the 23mm fixed focal length lens on the X100S, I hoped that the naturally intense green would be enough of a point of interest to "anchor" this scene.  But adding a lot of clarity and contrast, plus a bit of saturation in the blue-gray water helped to make this a more colorful palette than I originally saw.

After our beach stroll, we decided to drive up the coast a few short miles to take a look at the elephant seals that inhabit a stretch of beach just north of San Simeon.  Again, the 23mm fixed lens on the APS-C X100S would not be my first choice in photographing these ungainly but fascinating animals.  I'd rather have a tight portrait of the males jousting for supremacy.  At the very least, 200 mm on a full frame body would be required for such a shot. Maybe even 400 mm from the public viewing area.  But the X100S still held its own, even with the significantly too-wide perspective.  Without an anti-alias filter on the X100S, you can crop in as tight as you can, and still get incredible detail.  This shot is about 15% of the original file. 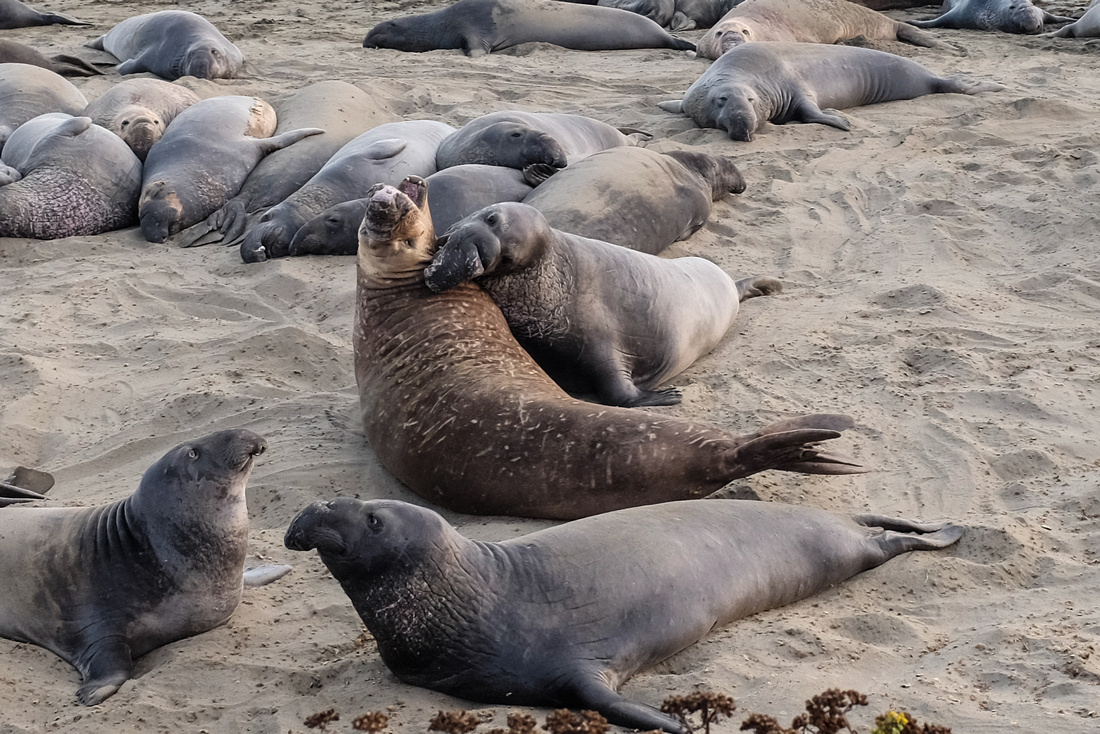 Sunday morning was a bit foggy and overcast.  I thought a black and white treatment might be good for the subdued light.  So I switched to the X100S's black and white film mode, rather than convert a color image in post.

As much as I'd love to have a Fuji XT1 and an array of dedicated lenses, the budget doesn't have room for that just now.  So I'm going to continue to explore with this great little camera.  I continue to be impressed with it.