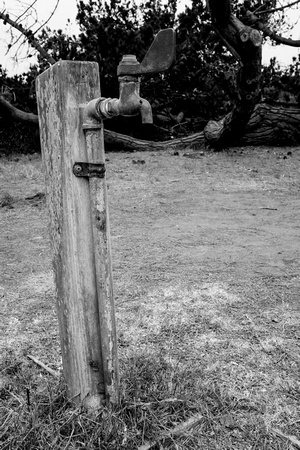 Karen and I decided to make a quick getaway up to the bucolic and beautiful Central Coast community of Cambria for the weekend.  We were lucky enough to get a nice room in a small inn right on Moonstone Beach.  We drove up on Saturday and did the usual routine for us: first stop - tri-tip lunch at the Main St. Grill, formerly owned by the great Central Coast chef Ian McPhee, who has since consolidated his holdings down in Templeton, and has sold the Grill to a new owner, who has enlarged the place significantly.  Fortunately, growing the business hasn't reduced the quality of the food, perhaps only the quaintness of the place.

But what immediately struck me, and set the tone for the entire weekend, was the prominently displayed sign on the restroom doors, which advised customers that due to the severe water shortage in Cambria, some restaurants are prohibited from opening their restrooms to customers.  Instead, customers are directed to use "Honey Huts" (yes, that's a brand name) outside.  "Honey Huts", as in porta-potties.  No flushing needed.

Well, okay.  Everyone knows that we're in a severe drought here in California and throughout the West.  Down here in Orange County, cities are discussing ways to incentivize conservation, ranging from patrols looking for over-irrigation on lawns, to actual fines for using too much water.  Predictably, the pinheads on the editorial board of our local libertarian rag, the Register, say that if water management were left to the private sector in an unfettered free market, profit incentives and pricing would take care of the matter.  Which, on its face, is ridiculous.  Economic theory doesn't create rain.  Which is ultimately the fact and the problem.  (Pardon me for a quick rant…. The Register is the poster child for the adage, "If all you have is a hammer, everything looks like a nail."  But enough of that.)

So back to Cambria.  After visiting a Honey Hut, we wandered the town, looking at all the neatlittleshops, and speaking with the friendly shopkeepers.  I asked several of them, just how bad is the water shortage here in Cambria?  The answer: our water source is groundwater wells, and the best estimates are that we expect to run dry in November.

Holy crap!  November, as in 90 days away.  "Run dry", as in no water.  Not something that's fixable "when we get around to it."  So what is the community doing about it?

The answer, severe restrictions (e.g. no watering landscaping with potable water, no pools, no water at campgrounds, etc.) while debating growth vs. no growth.  The no-growthers believe that conservation alone, strict growth limits, and restrictions on the tourist economy (e.g. restaurants, lodging, etc.) will enable the community to survive the drought.  Which is also ridiculous.  Conservation and restrictions on human activity (whether growth-inducing or mere human survival) also do not create rain.  Some fear that expansion of the water supply will induce growth, and thereby reduce property values.  Of course, a million-dollar home without a source of water is, well…not exactly prime real estate.

Both of these seemingly polar opposite philosophies share one thing in common.  They're economic models based on supply and demand.   But when the supply side of the equation is absent, all you have is unmet demand.  And when the issue is water, that's a life and death deal.  (Unless, apparently, you're Lady Gaga and can cajole the powers that be to fill the pool at Hearst Castle just up the coast with 345,000 gallons for a music video.)  But at the end of the day, you can't really play poker with Mother Nature; she never folds. 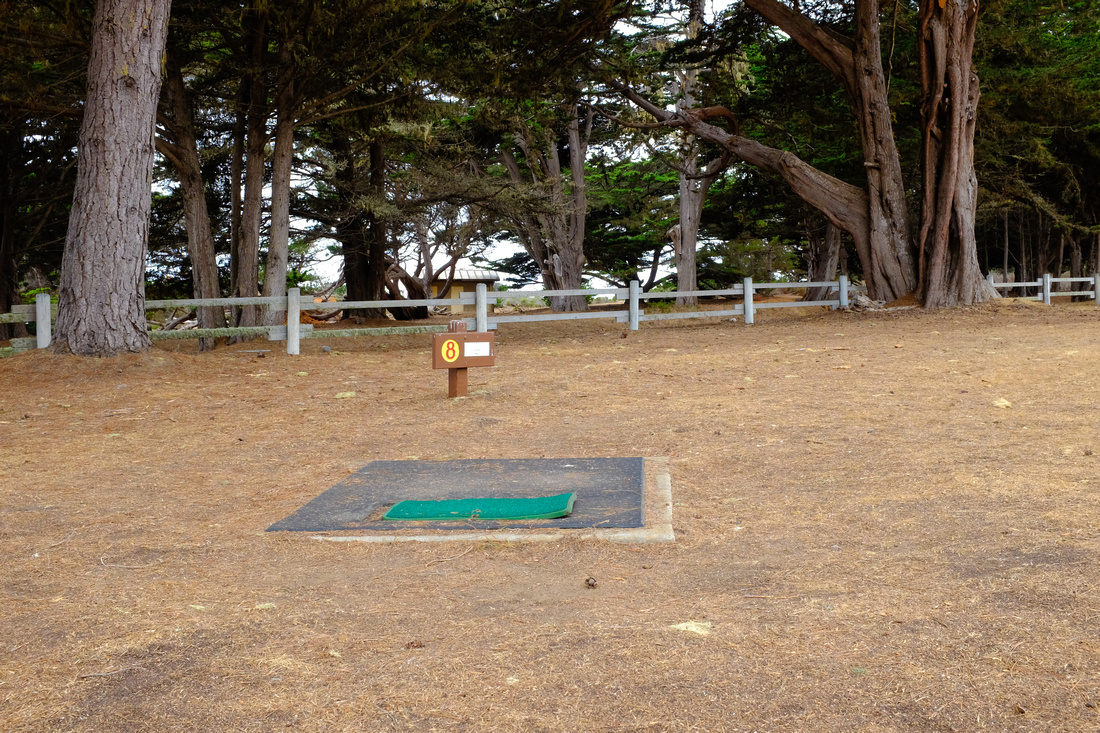 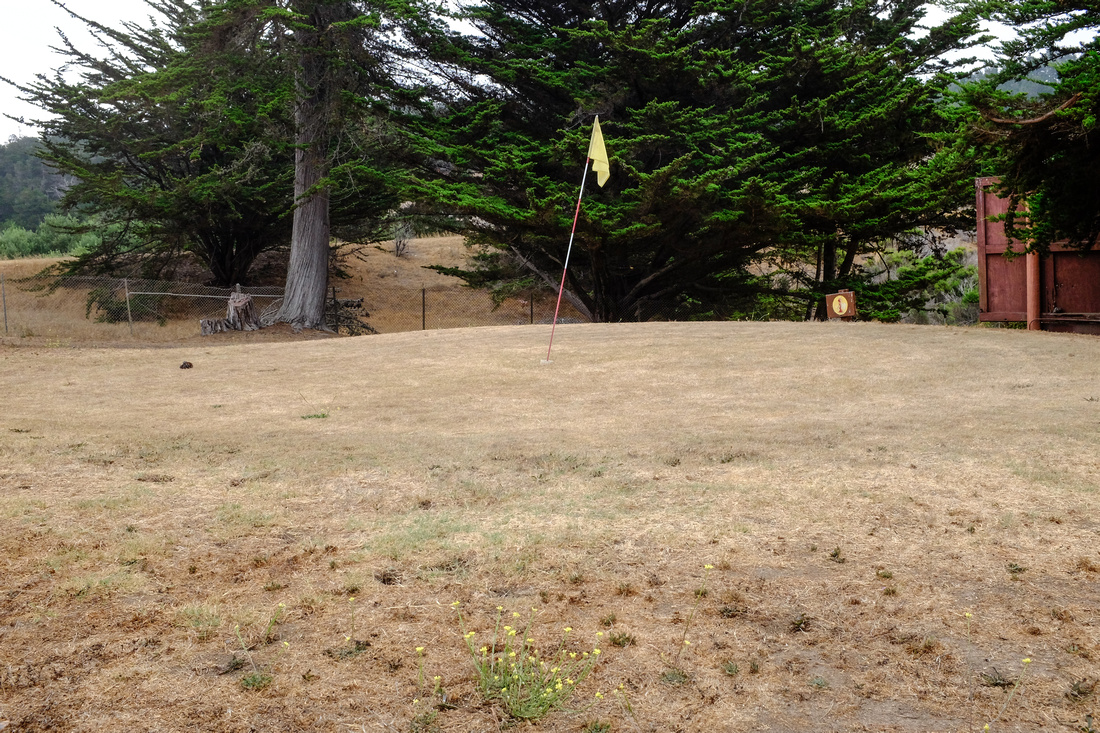 So now you have the local electeds, the Board of Directors of the Cambria Community Services District, trying to implement a small desalination plant on a brackish water stream just up the coast in San Simeon.  This, by itself, is not a long-term solution, but it's not a small matter either, especially in these parts. It's a $15 million project, subject to the jurisdiction of the usual lineup of regulatory agencies, including the Regional Water Quality Control Board and the fiendish Coastal Commission, which never met a project it didn't either hate or use as leverage to achieve something else unrelated to the matter at hand.  So the chances of getting the plant built in 90 days are slim and none. Trust me, I've been there.

And you have the no-growthers using the predictable tactics to thwart the desalination project: claims of back room deals by the CCSD, and a lack of "transparency" in its deliberations.  "Transparency" is the buzzword of the decade, as if the press' and public's ability to see all and know all in real time will somehow generate agreement on pressing problems among people who can't even agree on the time of day, whether in Cambria or anywhere else in our great land.  But again, I digress.  Meanwhile, time marches on, and each day the community draws closer to November than they were the day before, which means no water.

Well, not completely.  There is one additional alternative: trucking in potable water every day for this community of 6,000 and its tourists, upon whom the community depends for its economic survival.  At dinner on Saturday night, the restaurant we visited offered beautiful vistas of the Pacific, but alas, no water; instead, they sold bottled water at their cost, which was the best they could do.  Sad.