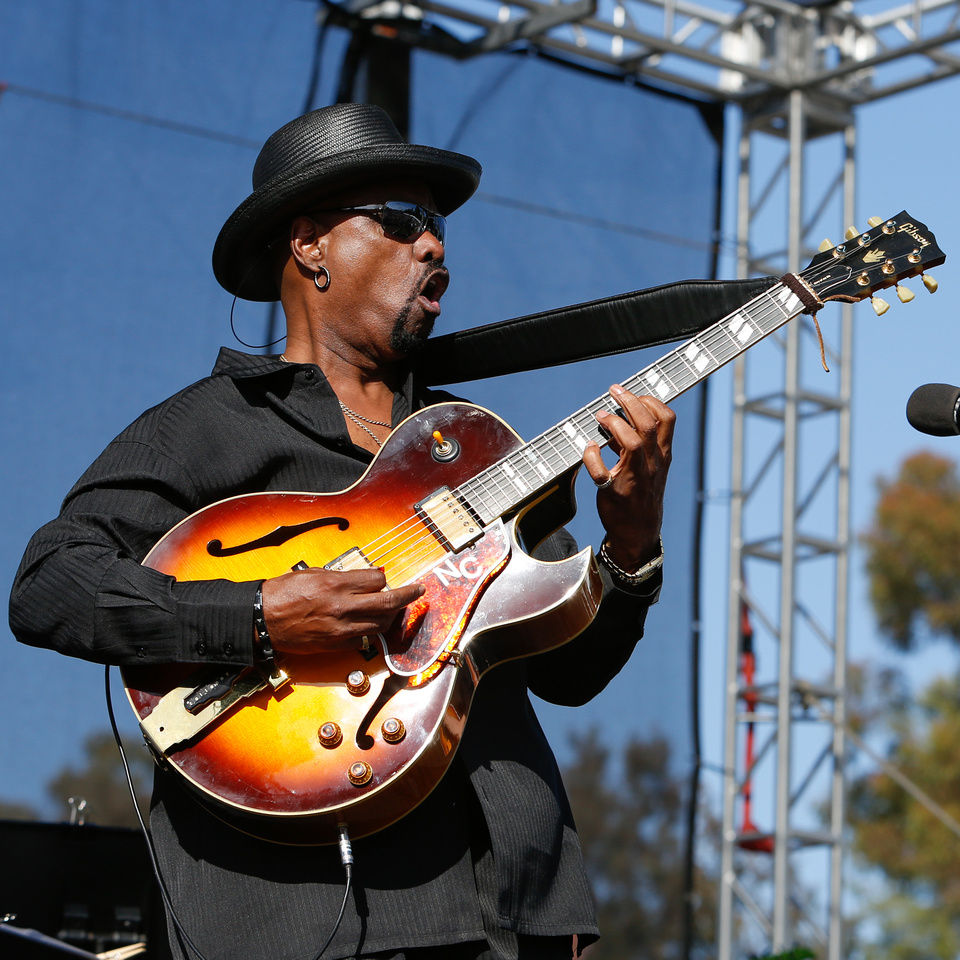 It's been several weeks (months?) since my last blog post; Spring is my most busy season, what with dance studio portraits, multi-performance dance concerts, and other end-of-school year projects.  I'm still working through over 300 portraits from one of my dance studio clients.  But sometimes a guy just has to take a break and do something for sheer fun.  For me, it's photographing live music, and most often, it's at one of KSBR's "Gary and Kelly Show" broadcasts from the Norman P. Murray Center in Mission Viejo. Today's show featured Nick Colionne, who pretty much blew the roof off the place, as we all knew he would.

I've posted several images from previous outings at the Murray Center, and I have a gallery on the website solely devoted to artists photographed there.  I've also discussed at some length the strategies needed to produce good images at this venue, primarily the need to shoot from the sides into the dark voids in what would otherwise be wings if this were a legit stage.  Otherwise, shooting from the front toward the back produces utterly distracting and unmanageable backdrops to the artists, due to bright windows covered in sheer draperies lit by colored gels.  Looks okay to the naked eye, but in photographs, no.  I've also commented on the limited shooting angles here, necessitated by avoiding conflicts with the video crew and the audience members.  Some of these shooting angles are measured literally in inches.  Constrained as these angles are, photographs can tend to take on similar looks, and thus, become repetitive and boring, no matter how talented the artists are.

So lately I've turned to different post processing techniques to try to give fresh looks to otherwise repetitive compositions.  I've found several I like, and will use them depending on the mood of the shot.  These techniques are primarily based in Lightroom, my first stop in the post production process.  Next comes a trip to Photoshop for more detailed or localized adjustments not possible in Lightroom, especially getting rid of distracting background elements.  Finally, I'll employ one or more plug-ins from Nik Color Efex Pro if the mood of the shot would benefit from them.

Today, Nick Colionne provided opportunities to make use of many of these techniques.  Colionne hails from Chicago, and was introduced to the music scene at a very early age.  He auditioned and toured with the Staples Singers at the age of fifteen.  His mom wanted him to play like Wes Montgomery.  Dad wanted him to emulate the style of Kenny Burrell.  Nick himself preferred Jimi Hendrix.  Today, you can see all three of these influences in Nick, both musically and visually.  (My first photograph of Nick Colionne, made at the 2013 KSBR Birthday Bash, immediately struck me as channeling Jimi Hendrix, before learning of Hendrix's influence on Nick.  It's the photo at the top of this post.)

So today, we saw and heard each of these musical influences, which created visual moments captured on the sensor of my Canon 5D Mark III.  These moments can be characterized, in the words of Jay Maisel, in terms of light, gesture, and color.  Together, they create a mood, which leads me in certain directions.  Sometimes I want to tone things down, while at other times I want to jack 'em up. 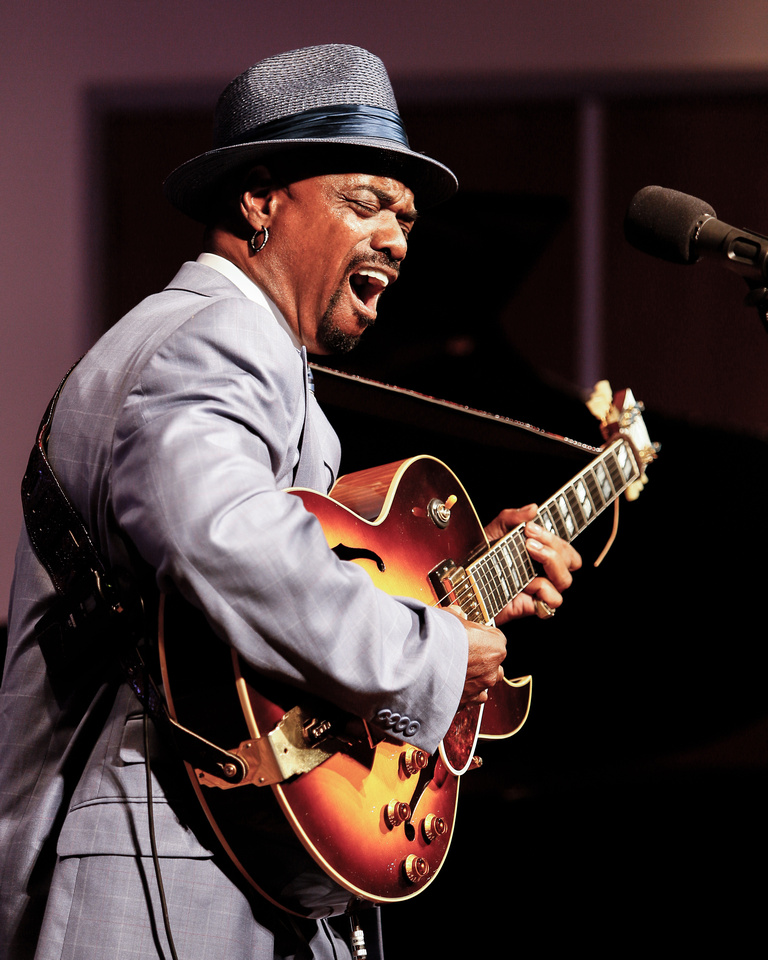 This image has relatively little post-processing.  The lighting today, for some reason, rendered more yellow/red and contrasty than in previous broadcasts, so color correction and reduction in vibrance was applied globally to all of the images.  This had the unfortunate result of washing out some of the blue in Nick's suit and hat. But it provides a baseline for further adjustments depending on the composition and mood of the frame. 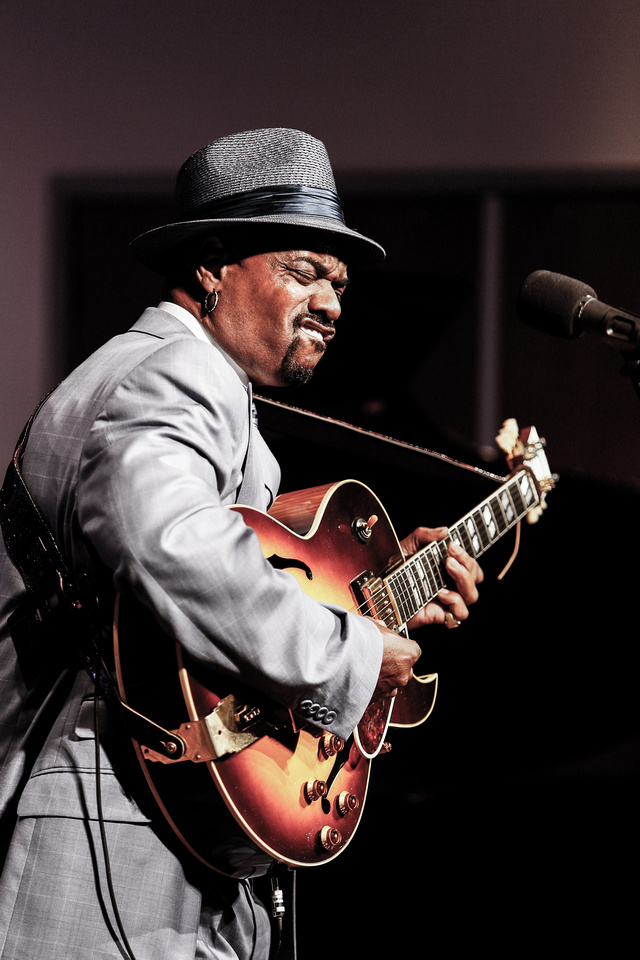 As Nick's performance gets edgier, so too does my interpretation. More liberal application of mid-tone contrast (clarity), and less vibrance gives the shot a bit more "grit". 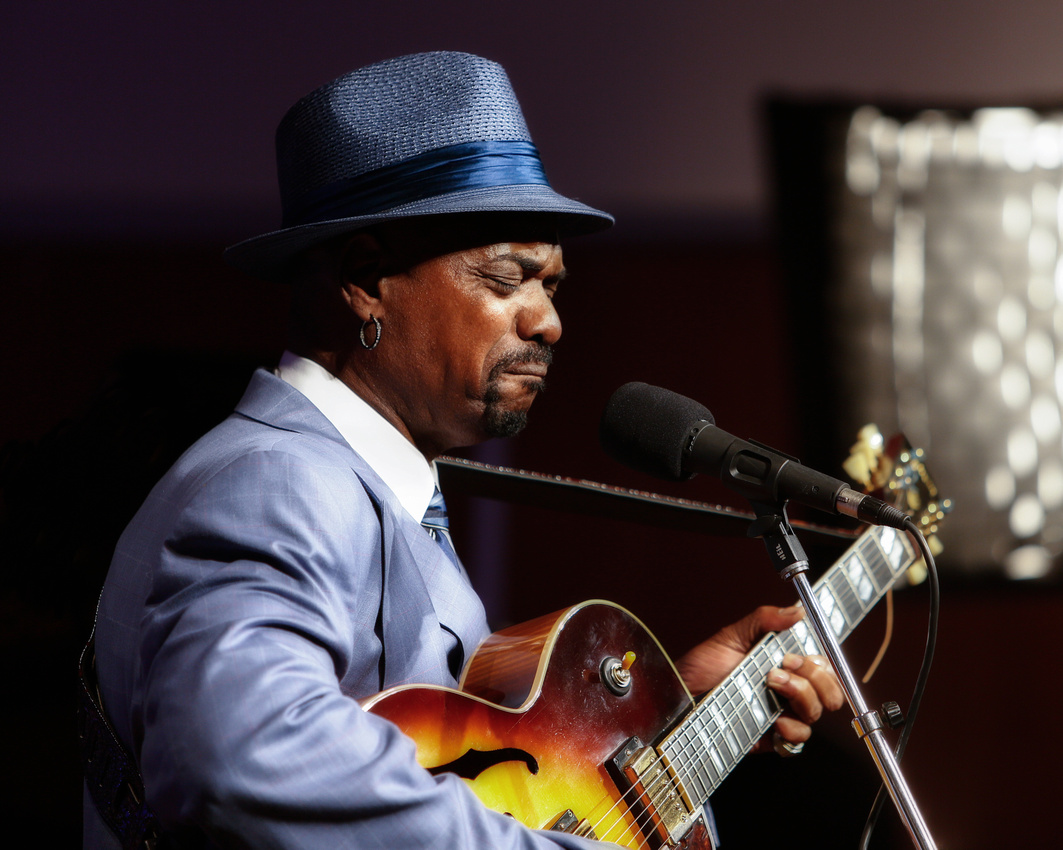 Then, as Nick does a vocal performance, his mood softens.  A brief guitar riff between vocal passages produces an inward-focused moment.  I look for these moments as they, too, tell a story.  For me, they call for a softer, less aggressive approach.  A subtle application of the "Midnight" filter in Color Efex Pro takes the edge off the scene, while at the same time helping to restore the blue of Nick's suit. 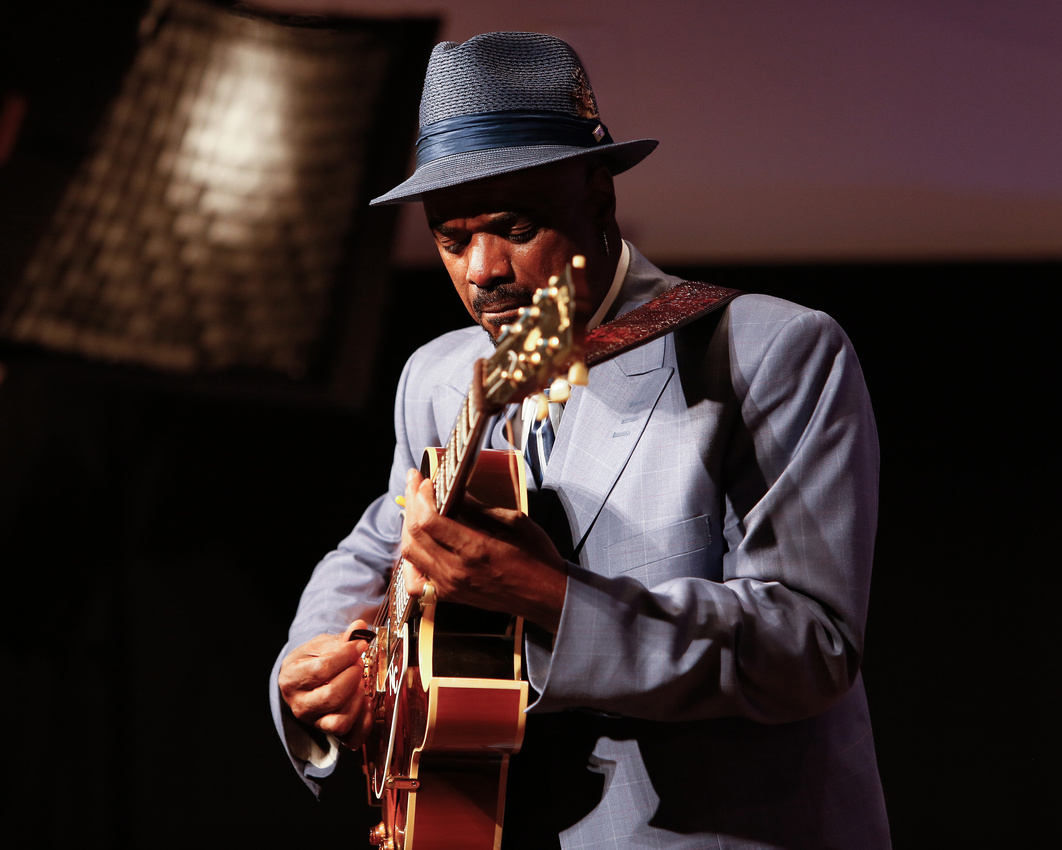 Here's another shot without much noticeable post-processing.  What's missing from this frame are distracting elements in the original capture, including light leaks from the gridded soft box behind Nick, and miscellaneous fixtures on the wall.  These distractions are easily removed in Photoshop. 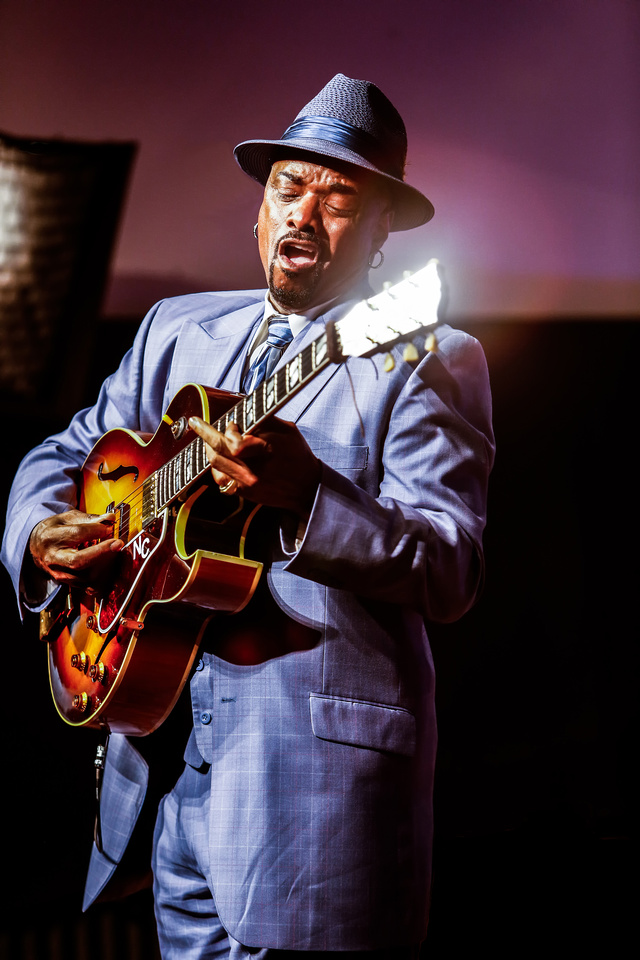 The image above was the first one that immediately caught my eye.  The combination of light flare on the headstock of the guitar and Nick's facial expression led me to hit the Lightroom sliders hard.  Boosting contrast, clarity, and vibrance restored color intensity that was threatened by the flare.  At the same time, the flare is the key element of the mood of the photograph. 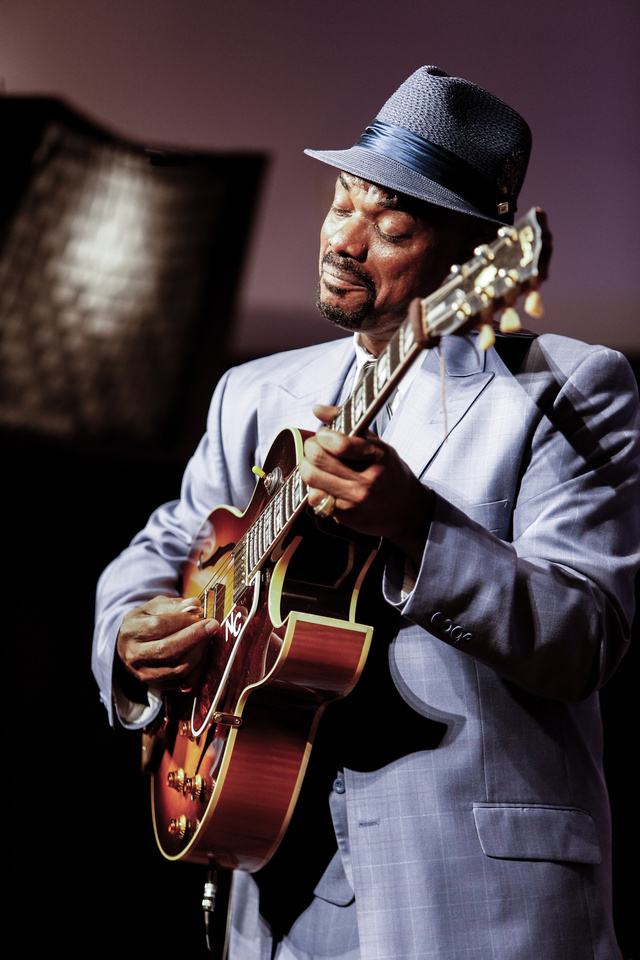 This image is one where the mood is contemplative, but not downbeat.  It called for a light touch.  A slight boost in clarity, offset by reduction in vibrance to reduce redness in the skin, produced a more natural result than the camera's internal engine did. 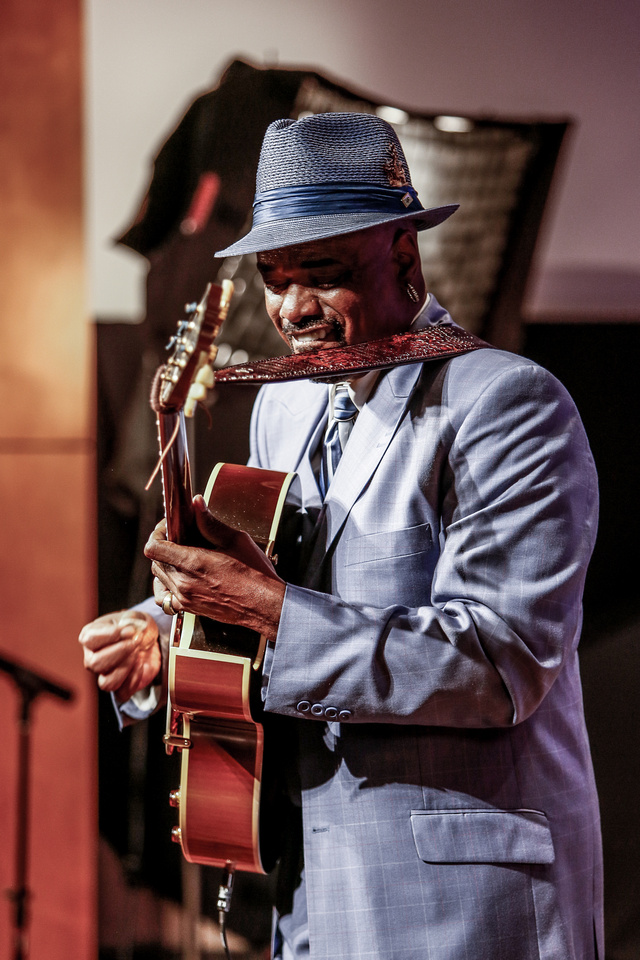 Back to higher energy, both in terms of Nick's performance, as well as the clutter of visual elements in the frame.  This is one of those shots where the shooting angle is so constrained.  As a result, the image is a jumble of colors, lines, and shapes.  Perhaps not the most immediately accessible frame, but it's still one I like, primarily due to Nick's facial expression.  So I went with it, boosting contrast, clarity and vibrance again.  I left in some of the elements I would normally clone out, such as the light leaks and red label on the video soft box behind Nick. 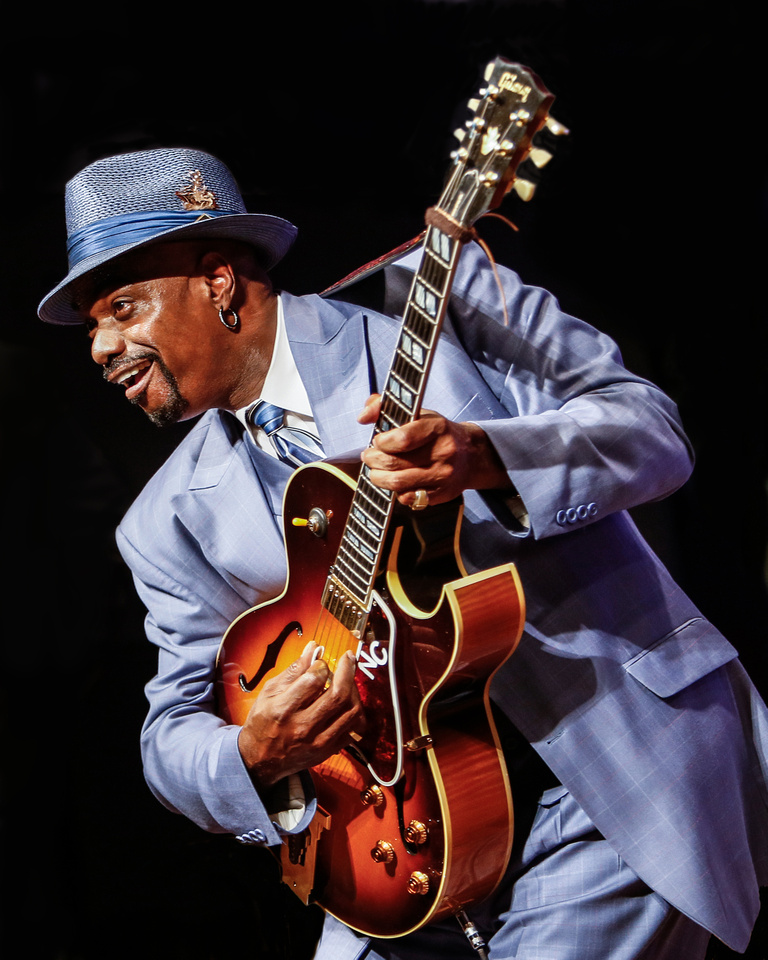 Here's the final frame of the day, made in the final moment of Nick's final song.  This image is clean, focusing solely on Nick, his expression, and his interaction with the audience.  What it doesn't have are: a headless portion of host Gary Bergeson behind Nick, unrecognizable foliage from the background at the upper left of the frame, portions of a desk at the bottom of the frame behind Nick, and a half-wall of purple color above a black fabric used to flag off stray light behind the desk.  Each of these distracting elements were removed in Photoshop, not by the use of selections and extractions, but by careful cloning away of each separate piece of visual junk.  And although the final result is devoid of any contextual elements present in the other photos, the starkness of Nick's expression, and his engagement with the unseen audience, is a more powerful representation of this very talented individual.  Would this treatment work in all cases, with every artist?  Probably not.  But for Nick Colionne?  Most definitely.