My First Exposure to Wheelchair Tennis Several weeks ago, I was asked by Steve Bell, Community Services Manager for the City of Mission Viejo, to provide official photography services to the City for its upcoming wheelchair tennis tournament.  Well, I've never shot tennis before, I said to myself, but hey, how tough could it be?  I shoot dance pretty well, and am reasonably competent at high school football, so I know how to capture peak action.  I have that going for me.  Plus, these athletes would be in wheelchairs, so following them shouldn't be all that difficult, right?

Little did I know at that time that these 38 men and women would be world-class athletes who happen to be in wheelchairs, and that if given the opportunity, they could beat the pants off you without breaking a sweat.  I didn't know at the time that these athletes compete at Wimbledon, at Roland Garros in Paris, at the US Open, and other elite venues around the globe.  I didn't know that the NEC Wheelchair Tennis Masters and the ITF Wheelchair Tennis Doubles that I would be shooting are considered Grand Slam events in the wheelchair tennis world, and that tennis organizations around the world would want my photos, pronto.  In short, I didn't know anything.

Eight days after the tournament began, I ended my work proud, happy, and exhausted, but most of all, blessed.  Covering this event was one of my most fond photographic experiences, one which enabled me to exercise my best skills, learn new ones, and best of all, just be with these amazing athletes and the people who help promote their sport.

Just to get the technical stuff out of the way, this is how the week went.  In addition to covering the two draw parties (singles and doubles), I covered all matches I could (I missed the Friday night matches due to other commitments).  Until the Finals, there were usually two, three, or four matches going on at once, so I had to bounce back and forth between them.  I sat in a very low folding three-legged stool at the net across from the umpire, enabling me to swing right or left to focus on one or more players.  I knew that shooting low would be absolutely necessary to capture the best angles.  The last thing I wanted to do was to shoot down on these athletes.  I found the most versatile lens in my bag to be the 70-200 f/2.8 IS L, and stuck with it for all of the matches, pulling out my 24-70 for some portraits, and the 24-105 for the Finals awards ceremonies.  (On a couple of occasions, the local paper sent out photographers to cover the event.  They'd bring 300-400mm bazookas and wind up standing at the top of the bleachers to get a single player in the frame. One guy even brought a 1200mm behemoth. I have no idea what he thought he'd get with that thing.)  Each day, I'd shoot anywhere from 800 to 1500 images, go home, and spend about 6 hours culling, editing, and pushing the selected images to the International Tennis Federation, the United States Tennis Association, the City of Mission Viejo, and various paralympic organizations in Canada and Europe.  These were 18 hour days, and I operated with very little sleep for a week.

Once I got over my initial shock at the spectacle before my lens (the shot of number one-ranked Shingo Kunieda above was one of my very first frames), I settled in to work on the goals I had set out for myself as I planned for my coverage.

It's pretty obvious that wheelchair tennis would involve motion, just as able-bodied tennis does.  What impressed me right off the bat was the speed and dexterity these athletes brought to the game.  The best of them hit just as hard as anyone else can, and that means getting from one place on the court to another with speed, and stopping just as quickly.  So conveying speed and motion were actually pretty easy to do.  For me there was no compromise between freezing motion and conveying motion (which is usually captured by slow shutter speeds); I opted to freeze the action and let the athlete's body positions convey motion as in the frames below: A side note to this:  Consider the strain on the back muscles of these athletes, who are strapped and immobilized in their chairs, putting all the torque on their back as they push, pull, twist, turn, reach, hit (violently hard), and react.  It has to be more straining than an able-bodied tennis player who can move his or her lower body.

A good sports image needs to convey not only the action, but the athlete's reaction to the action, either in the intensity of the moment itself, or immediately after.  (There's a different category here, the jubilation [or "jube" as sports shooters call it] of a great shot or victory and we'll get to that later.)  Facial expressions during play can convey the joy or difficulty of competition, the energy required to compete at this level, or other factors.  So I needed to be aware of these, search them out, and compose the finished image to place focus on them: 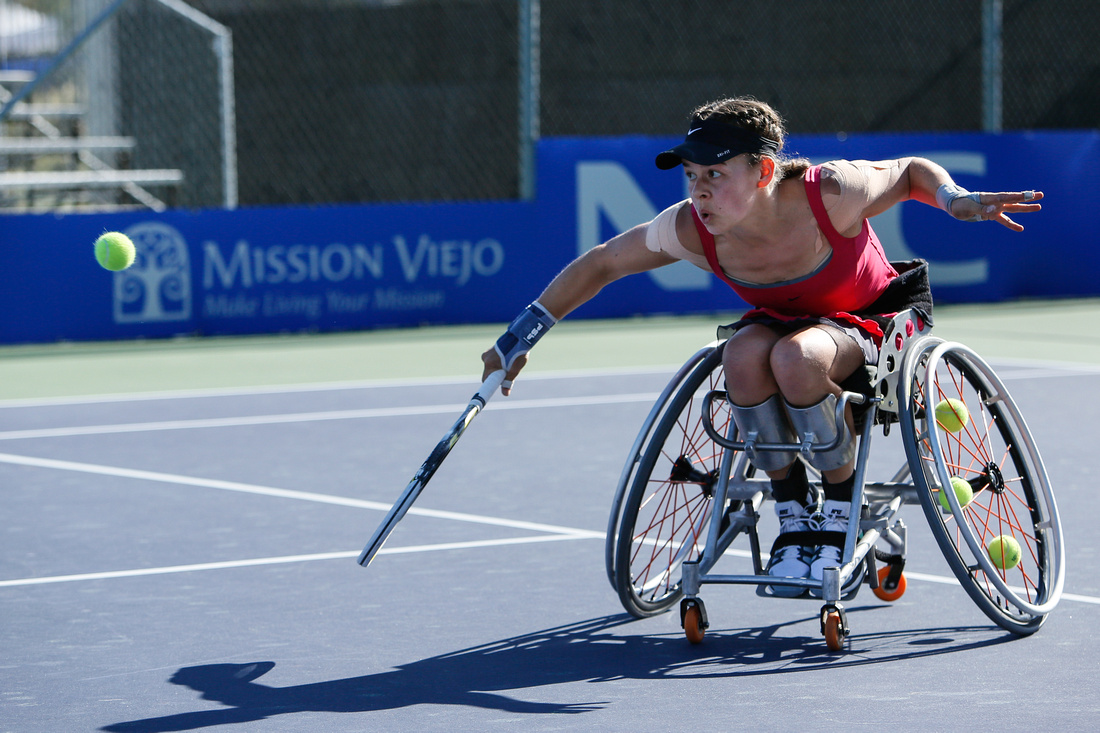 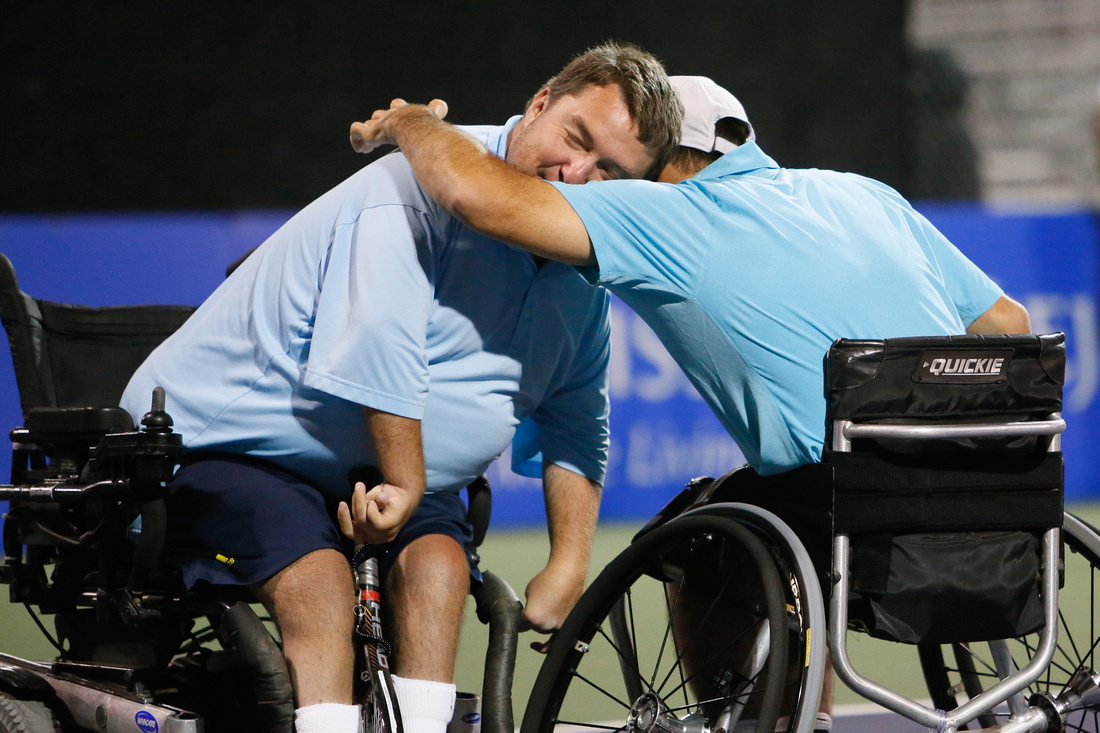 The organizers and sponsors of an event like this are paying you to bring back great shots.  But for them, what makes a good shot great is when you incorporate their logo into the frame.  Fortunately, the two main courts were ringed with sponsor logos (though other courts weren't).  So putting the logo into a photo wasn't exactly difficult.  The best shots, however, were a blend of great action, the athlete's emotion, and careful placement of both against the backdrop of the sponsor's logo.  You can't plan for this kind of thing, but when it happens, you'd better be able to get it.  This is where experience in anticipating peak action really helps.  It also helps to pull back a bit, to give yourself some room to crop effectively in the finished image. 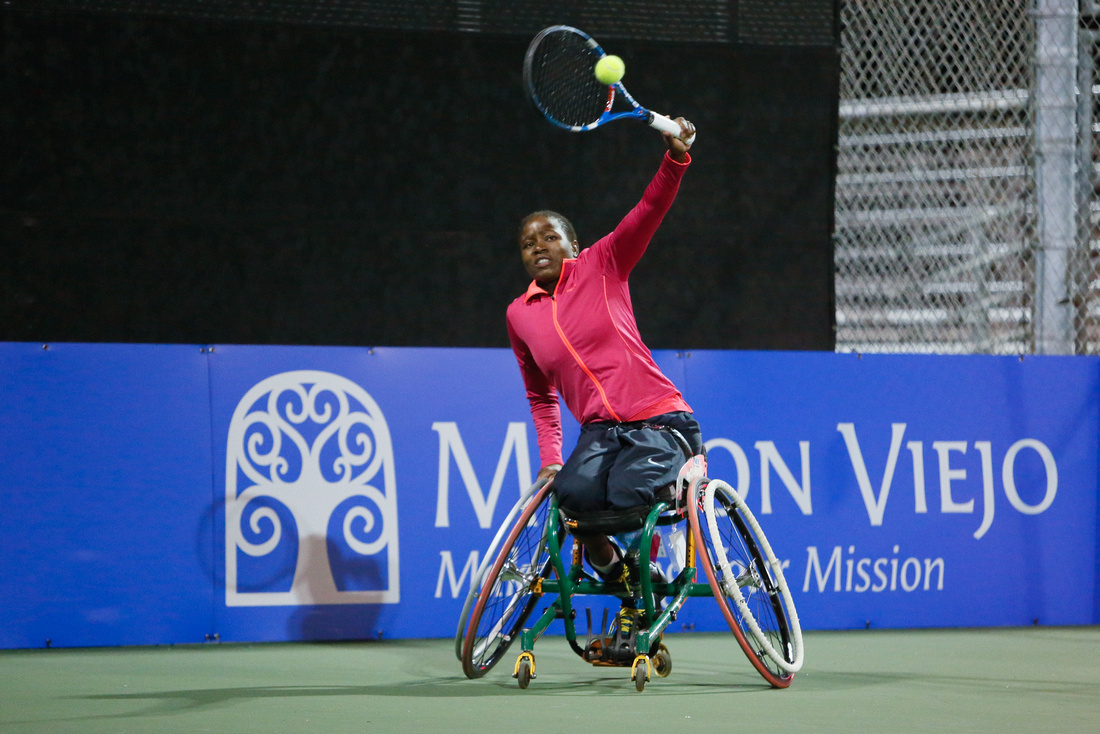 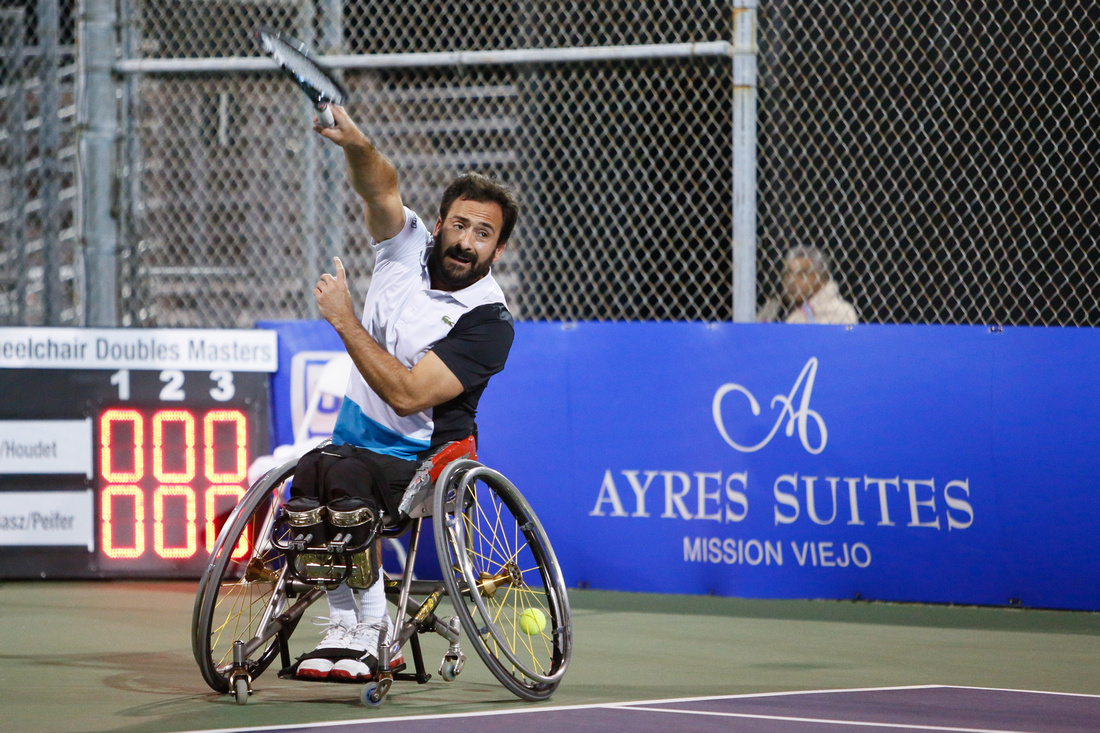 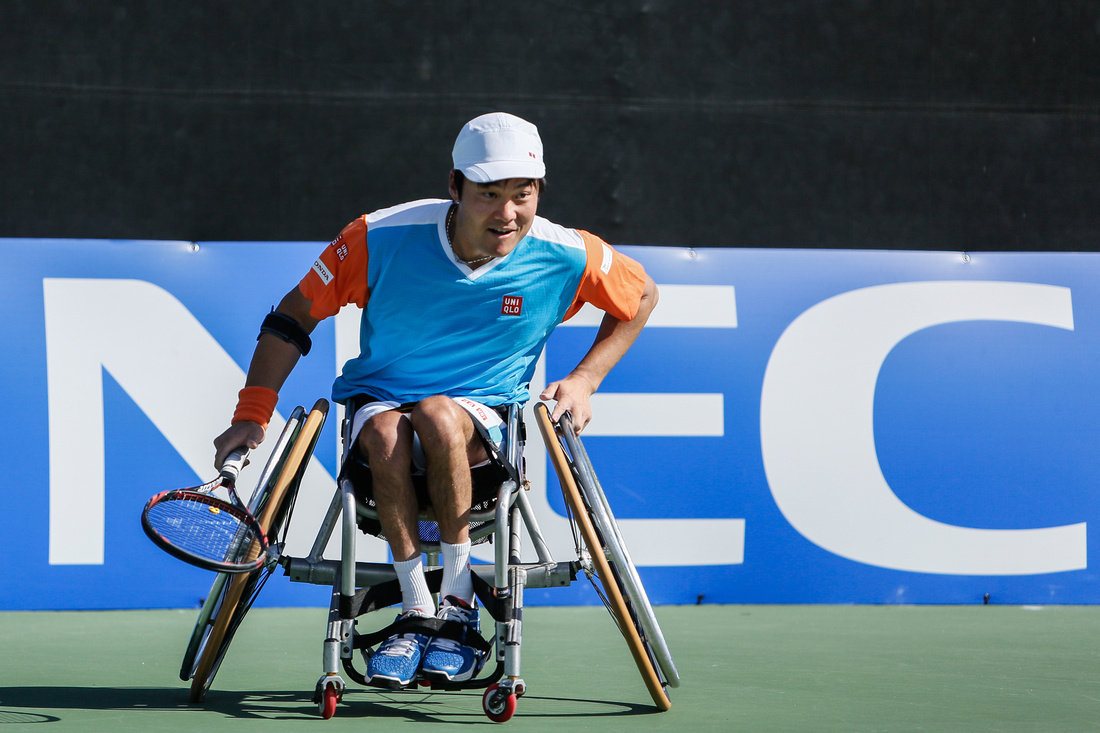 Here's a category that absolutely can't be anticipated, but it's wonderful when it happens.  An interesting framing of a body part in the composition, something that only a super fast exposure can catch, or some other anomaly can turn an ordinary photo into an eye-catching image.  Sports Illustrated runs these all the time, and while I have no illusions that my captures are worthy of SI, it's great when you get them.

Lucy Shuker and Marjolein Buis have their eyes on the ball: I don't think I could have asked Maikel Scheffers to frame his head within the racket as perfectly as this:

An exposure of 1/2500th of a second froze the fuzz being knocked off the ball by Joaquim Gerard: This one's so easy, but also easy to miss, as many photographers do when they stop shooting when the crucial play is over.  Sometimes the most compelling images are made after the play, as the athlete celebrates his or her accomplishment with jubilation. 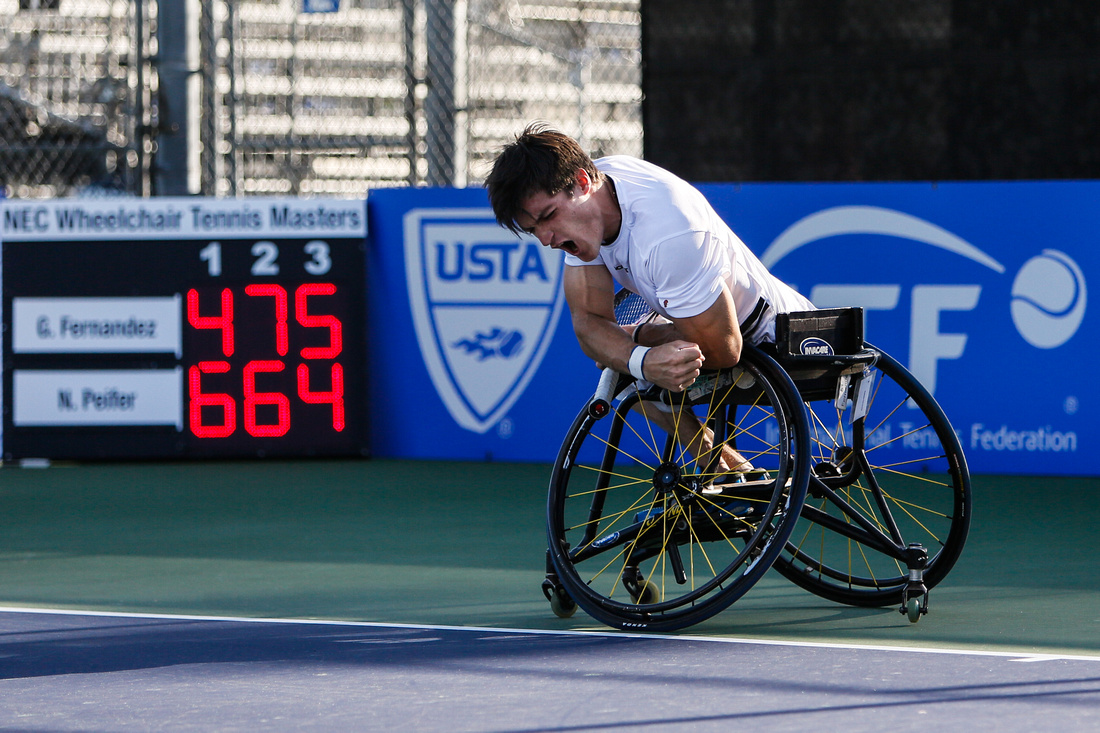 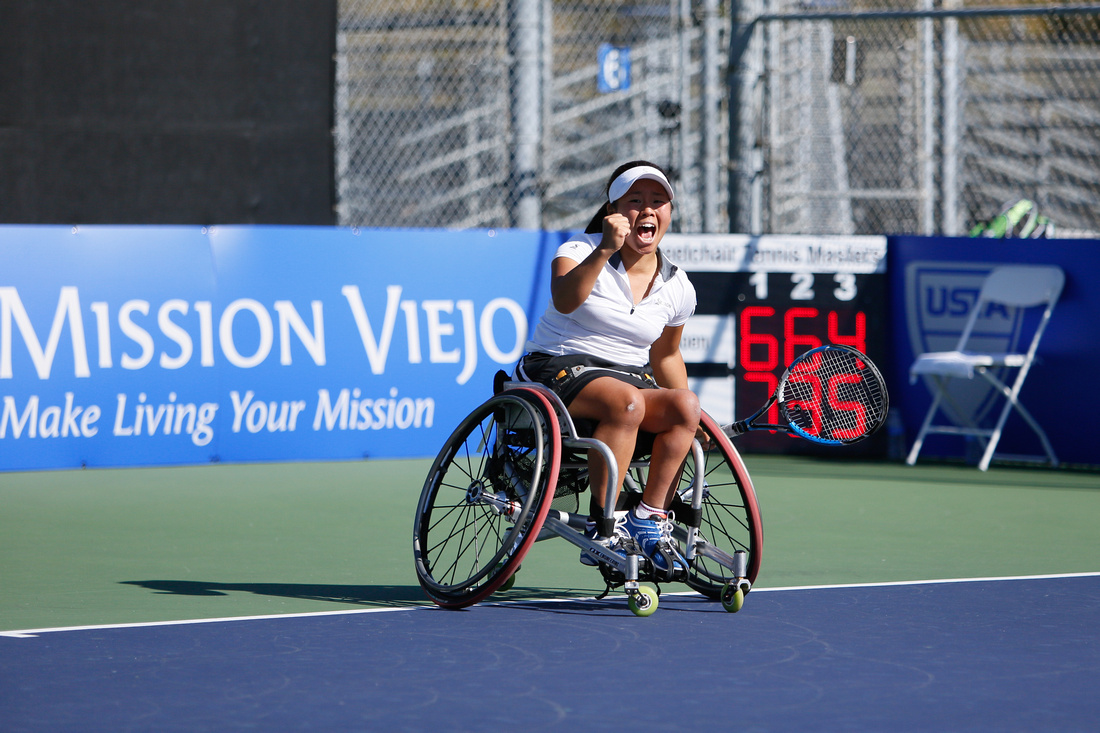 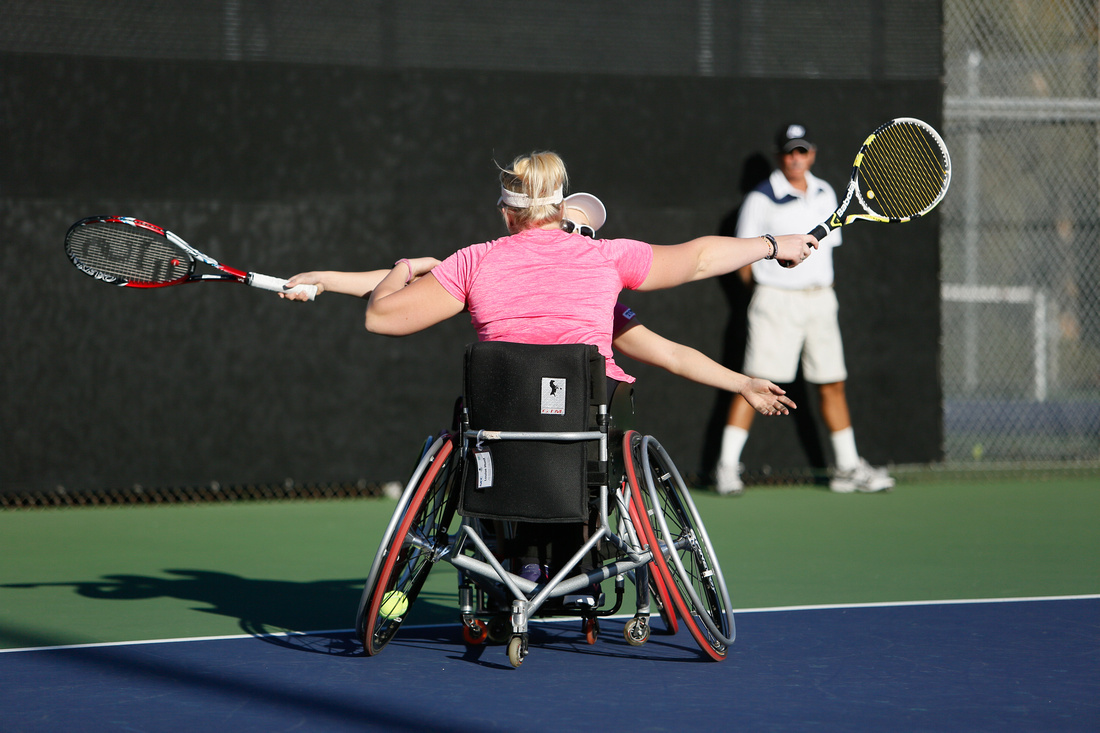 Here's a category I was totally unprepared for when I first started.  I quickly gained an appreciation of the speed and agility of these wheelchair-bound athletes, but it took me by surprise when I saw how fearlessly they pursued a volley, even when it meant a certain crash into the fence.  They're strapped into their chairs, and at that point, they're pretty much passengers.  But they get back up quickly, as if nothing happened.  At one instance (on a court other than the one I was covering at that particular moment) one of the competitors actually came out of the chair; I'm not sure I wanted to see that.  But these frames show the commitment they have to getting the point. 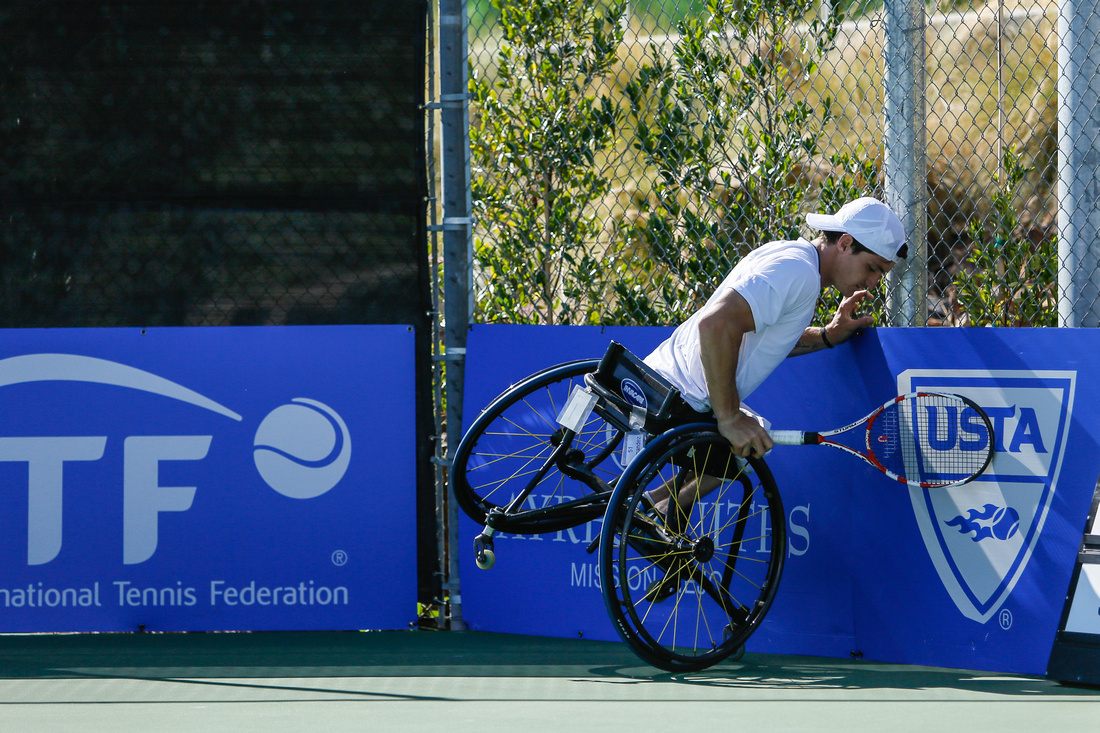 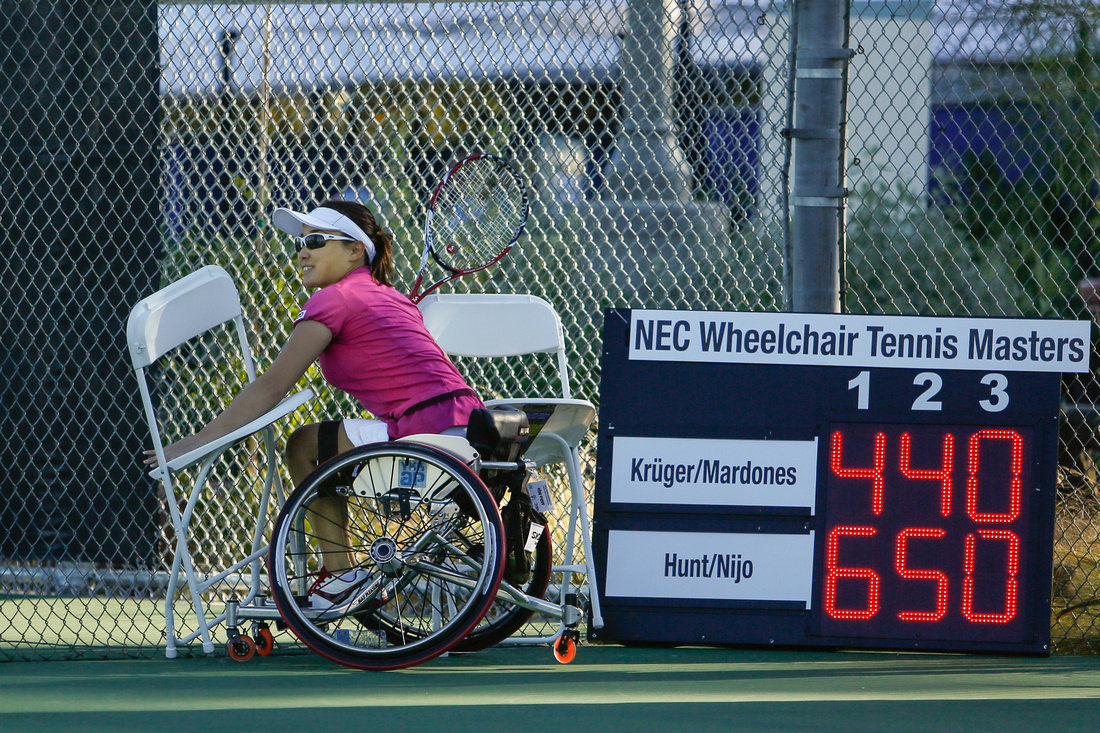 This one was a near rollover by Michael Jeremiasz during his match point victory in the Men's Doubles Final: I guess, at bottom, I'm a portrait guy.  As the tournament progressed, and I had made thousands of images, I began to focus more and more on the faces of the athletes and others associated with the sport who were there.  Some of the images made during the matches almost rise to the level of portraits.  For them, I ignored the goal of sponsor inclusion and got in very tight, either by cropping in camera, or after in post.  As the best sports shooters will tell you, "Get in tight, and when you do, get in tighter." 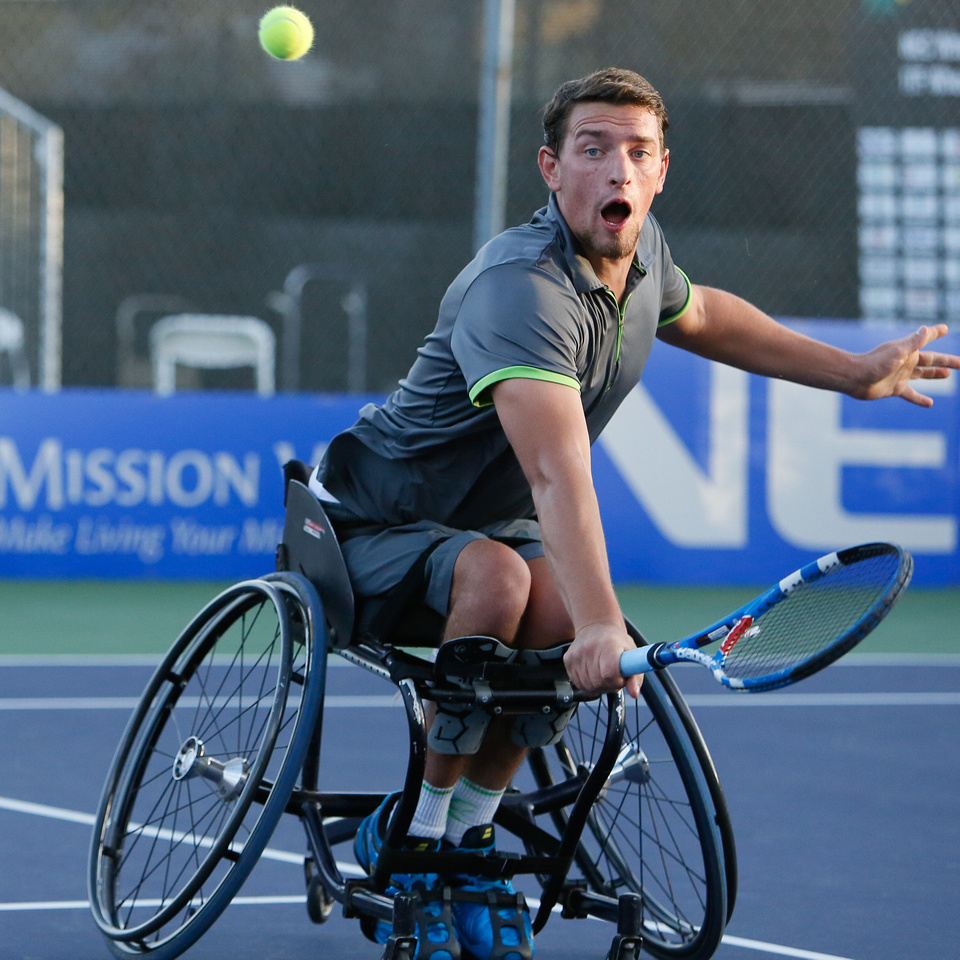 Others were made with specific portraiture in mind.  Here's David Hall, six-time World Champion from Australia, whom I posed seriously (he's not a very serious guy) to show off his artwork: 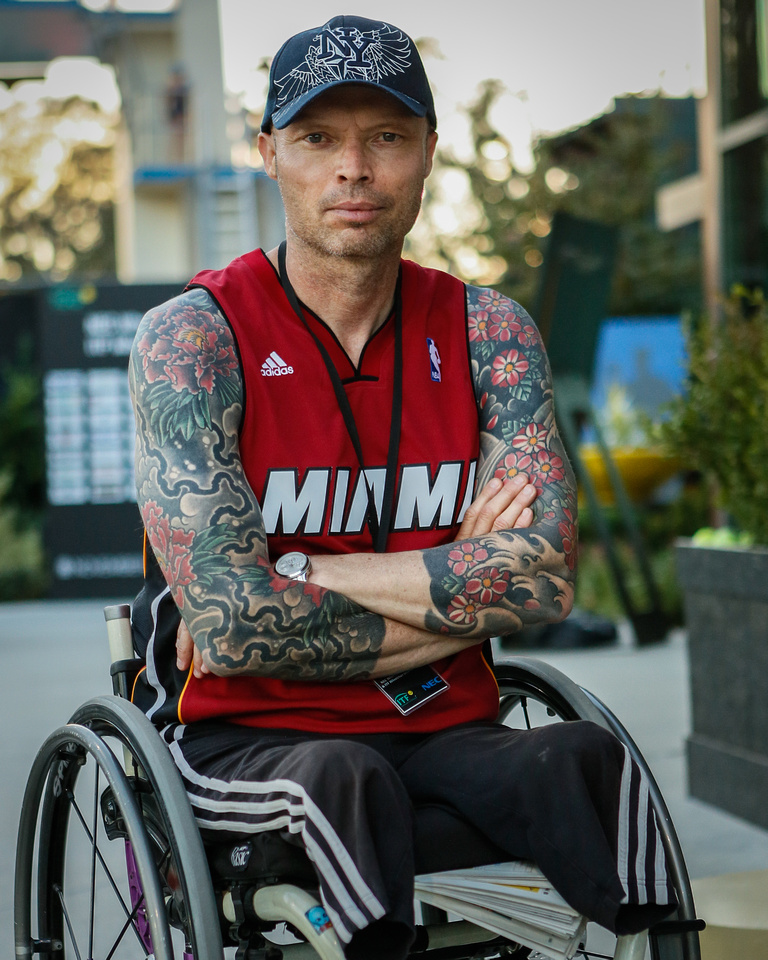 Brad Parks is credited with inventing the game of wheelchair tennis in 1976.  He joined David Hall on one of the side courts for a few minutes of friendly banter and volleys. 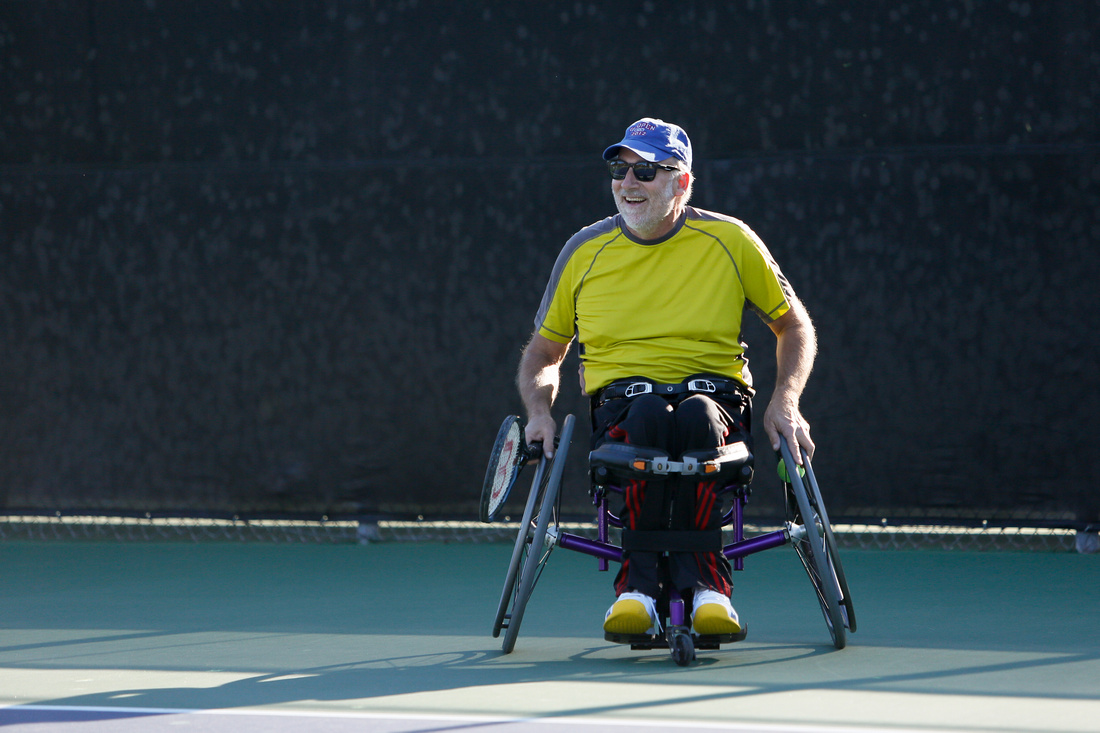 One of the more interesting people at the tournament was Mike Box, who builds custom wheelchairs.  He was there to provide repair and maintenance services for the athletes.  He would work on their chairs right there on the court, where I first saw him, or in an EZ Up shelter away from the crowds, where I made this portrait during the "blue hour" after the sun went down on Saturday: 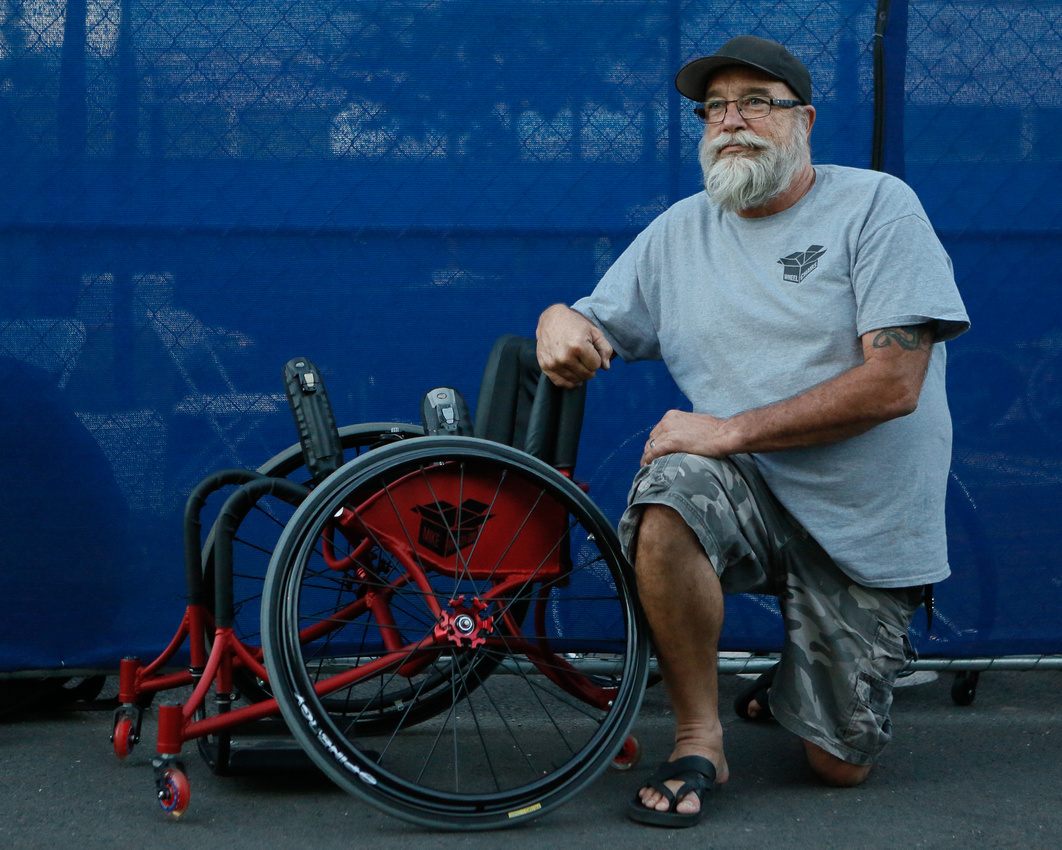 It has taken me about three days to recover from this project.  But was it ever worth it!  The City of Mission Viejo, particularly Steve Bell and Jason Harnett, did a masterful job of planning and organizing the event, with extensive support from the rest of the City family and community volunteers.   I heard many unsolicited comments from the players how much they enjoyed competing in Mission Viejo and the support that was offered to them in transportation, lodging, food, and other needs of daily life.  I hope the event comes back to Mission Viejo next year, and that I'll have another opportunity to play a part in it. Now, the challenge will be to bring this exciting sport to the general public, and fill those stands!

Rev. William A Stewart (Sydney Australia)(non-registered)
I enjoyed looking at your photos. I do voluntary wheelchair photography for NSW Wheelchair Sports and I photograph the Sydney International Wheelchair Tennis each year.

It's a great challenge and I enjoy it, but as you said it's draining.

The players are friendly with each while being very competitive.