And Now for Something Completely Different: A Geology Question Asked and Answered

Karen and I had the brilliant idea to spend a nice weekend in Tucson, Arizona, watching the Ducks of the University of Oregon defeat the Wildcats of the University of Arizona on their march to the Pac-12 championship.  It would be a mild, sunny weekend in the desert capped by a big Oregon win.  Too bad that I'd have to miss a chance of a lifetime to photograph the great Al Jarreau performing at the McKinney Theater at Saddleback College, but choices had to be made.  Well, crap, if it didn't turn out to be a major embarrassment for the Ducks, who got hammered 42-16, knocking them out of the BCS championship consideration, the Pac-12 championship, and quarterback Marcus Mariota from any consideration for the Heisman Trophy.  And it wasn't a mild, sunny weekend either, until we got the hell outta Dodge.

Which brings me to the La Posta Pluton, which rises like a wall from the eastern edge of the Coachella Valley as you come westward on Interstate 8 into San Diego County along the Imperial County line.  Or conversely, it forms the backbone of the mountains east of San Diego, home to a half dozen Indian casinos and the troops from the Border Patrol.  My first exposure to this weird and wonderful geology was in high school 40+ years ago, when my church group spent a Spring Break week helping to build a one-room schoolhouse just across the border into Mexico from the tiny town of Jacumba.  We stayed in Jacumba and walked the hundred yards or so across the border into Mexico every morning to build the school.  My fondest memory of that trip was a communal dinner prepared for us one evening by the local Mexicans, including a stew of chicken complete with feet (chicken).  Today, there's no way to walk across the border, which is hermetically sealed off by that giant metal wall, equipped with forests of communication infrastructure, and Jeep-mounted Border Patrol agents who eye you warily, because after all, there's no reason for anyone to go to Jacumba anymore.  Except, perhaps, to explore the geology of the La Posta Pluton.

When you come along I-8 from either direction approaching the vicinity of Jacumba, the landscape turns magical.  The mountains are no longer forested by scrub (from the west) or tamarisk and cactus (from the east).  Instead, the mountains are literally covered with giant, weathered granite boulders.  Millions and millions of boulders.  The kind of boulders you might expect to see along alluvial river banks draining the San Gabriels, the San Bernardinos, or the eastern escarpment of the Sierra Nevada.  But these boulders have not been deposited by alluvial runoff.  They occupy steep slopes from the bottom of the mountains to the very tops.

It's as if they were scattered along the tops of the mountains like chopped nuts on a hot fudge sundae.  How can that be?  Boulders don't roll uphill. And if you examine a road cut, of which there are many along this stretch of I-8, you see that the underlying layers of granitic rock are (more or less) solid. 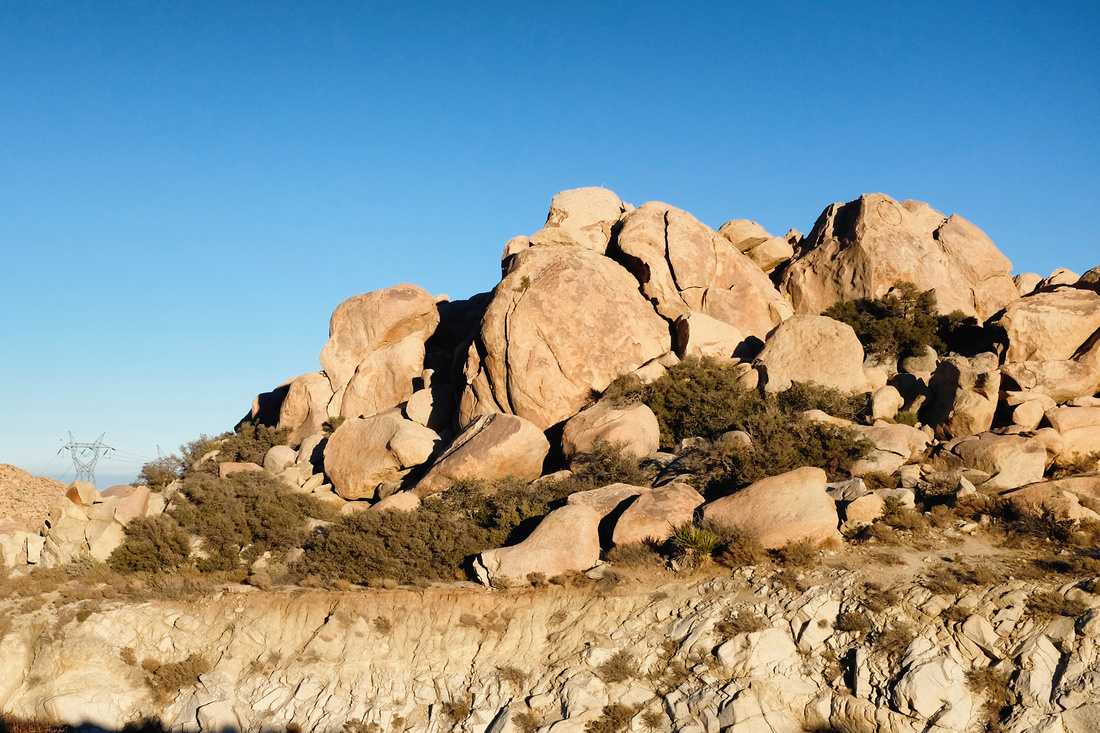 I had to figure this out.

Fortunately, Karen and I stumbled upon one of those roadside "attractions" that are so unique to the desert southwest: this one by the name of the Desert View Tower.  Built in the earliest decade of the 20th Century, Desert View Tower was meant to be a visual reward for travelers who made the arduous trip over the mountains or across the desert and up through the maze of rocks.  For those heading west, it was a memory of what they had endured; for those heading east, it must have been a warning of things to come.  But for me, Desert View Tower was the answer to my question, "how did those rocks get there?" 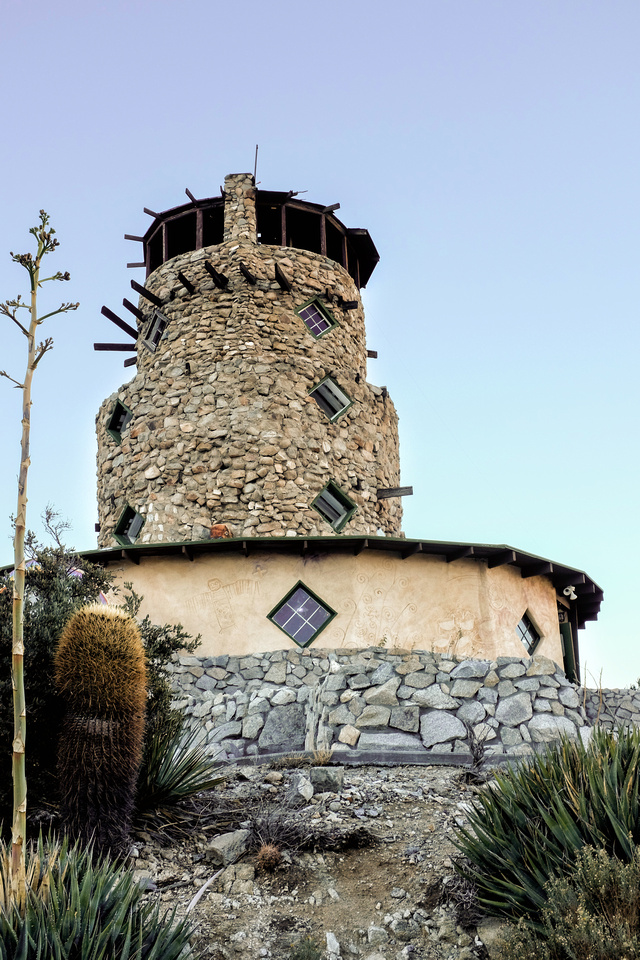 As we wandered around this property, complete with rocks painted to resemble animals, a guy selling handmade knives, and assorted other memorabilia, I wound up talking with the current owner of the place (I wish I got his name, but unfortunately I didn't).  He told me the story of the La Posta Pluton.  And as someone who's had a lifelong interest in geology, it made perfect sense to me.

This region lies astride the San Andreas Fault, the border of the North American Plate (seen in the far distance in the photo at the top of this post) and the Pacific Plate, on which we stand.  As we know from Geology 1, the Pacific Plate is subducting under the North American Plate, except that along the California coast, it has largely been stopped in its subduction, and instead is grinding past the stable craton of the rest of the USA, and is moving more or less steadily north.  That grinding is the work of the strike-slip fault known as the San Andreas.

Where the fault erupted, approximately 100 million years ago (give or take a few million), some pieces of the North American and Pacific Plates broke off the main basoliths and subducted down into the hot mantle below.  This molten rock then "burped" back up in the form of a chain of plutons running roughly from Riverside down into Baja California, of which the La Posta is the largest.  A pluton is a belch of rock emerging from below, cooling as it heads back up the tectonic equivalent of an esophagus. It's not a volcanic eruption of molten lava.  Rather, in effect, the earth hacks up a mountain, or in this case 1700 square kilometers of mountain.  The mineralogy of the pluton is complex, but basically it's granitic, and not especially dense.  It's easily worn down.  So the processes of erosion by wind and weather over eons have stripped much of the sand and softer elements and sent them eastward to the dirt bikers, ATV riders, and other denizens of the desert of Imperial County, leaving what are now boulders in place.

With the answers to my questions in hand, Karen and I left Desert View Tower, as the late afternoon sun rapidly faded to twilight.  The place got cold and eerily silent.  At the base of the entrance, we found the perfect accompaniment to Desert View Tower: "Coyote's Flying Saucer Retrievals and Repairs Service".  The only thing missing were the all-seeing eyes of the Border Patrol.

Ann-Marie McClellan(non-registered)
Steve, I love the desert too and have always been fascinated by the natural rock formations. It is wonderful to hear your musings on what you saw and to see through your very keen eyes. Thank you.
No comments posted.
Loading...
Subscribe
RSS
Recent Posts
Porch Portraits Under COVID 19 Restrictions Solving Problems by Not Creating Them Altruppersdorf Actors' Repertory Slack-Jawed Nick and Meredith: Or, Why I'm Not a Wedding Photographer Shooting from the Cheap Seats Back to Miramar Craziness at the Rancho Mission Viejo Rodeo The Jet Set Quintet in Long Beach
Keywords
portraits Musicians Dance Events KSBR travel Sports Ballet theater Landscape
Archive
January February March April May June July August September October November December
© Steve Wylie Photography
Powered by ZENFOLIO User Agreement
Cancel
Continue