Here's a quick tip on getting three different looks from one lighting grid, without moving a single light.

Today I received another urgent request for a quick headshot for a young dancer, Halley, who has been accepted into a fashion show/dance competition.  She needed the headshot for the event program.  So it was time to set up the Qflash in the Kacey beauty dish as a key light, with a collapsible white muslin backdrop lit by two speed lights.  The speed lights are unmodified, except for flipping down the built-in wide angle diffuser and attaching a velcro'd Honl Speed Gobo to flag off the light from spilling onto the subject.

The hardest part of this setup is getting even light across the backdrop with the two speed lights.  I place each one about two feet outside the backdrop, about one to two feet in front of it, each one twisted vertically and aimed across to the opposite edge of the backdrop.  This cross lighting, aimed properly, provides fairly even lighting across the entire backdrop.  It requires multiple tweaks to get the coverage even.  I check it first by using my light meter at various places on the backdrop.  I then examine the coverage more closely by using the highlight clipping warnings on the LCD of the camera.  With a constant ISO of 200, a shutter speed of 1/160 and aperture at f/8, adjusting the power levels and aiming the flashes will eventually trigger clipping across the entire sweep.  Stopping down the aperture incrementally will reveal where the clipping drops off.  From there, more careful aiming can reveal exactly where the light is hitting the backdrop.  Once this precise aiming is complete, you can then dial up the flashes to blow out white, or leave them just below clipping, as I did here, according to your taste.

From there, the key light is placed in a clamshell configuration, centered above Halley about three or four feet in front, with a reflector below.  I first used a white foamcore fill board, then decided to decrease the lighting ratio even more by substituting a silver reflector, placed immediately out of frame below her.  With the backdrop metered at f/11 and the key light giving me 1/160 at f/8, here's the result: 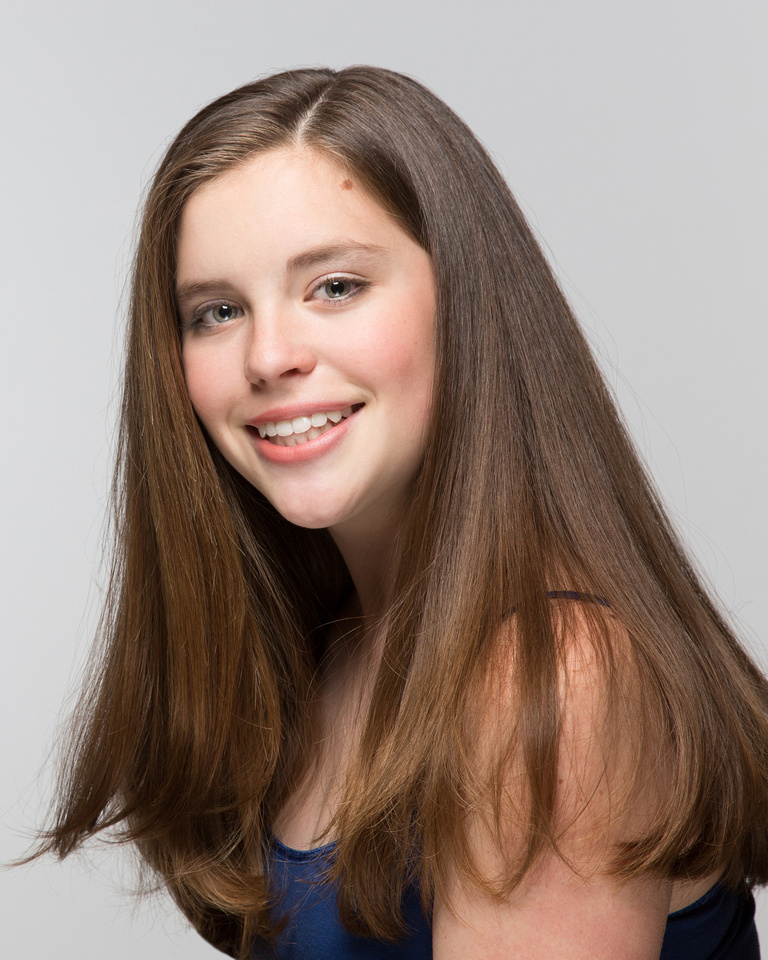 After making several frames with this setup, the second look is achieved by simply turning off the speed lights.  The falloff from the key light renders the backdrop a darker gray.  Still at 1/160 at f/8.  No other change was made.  Here's the result: 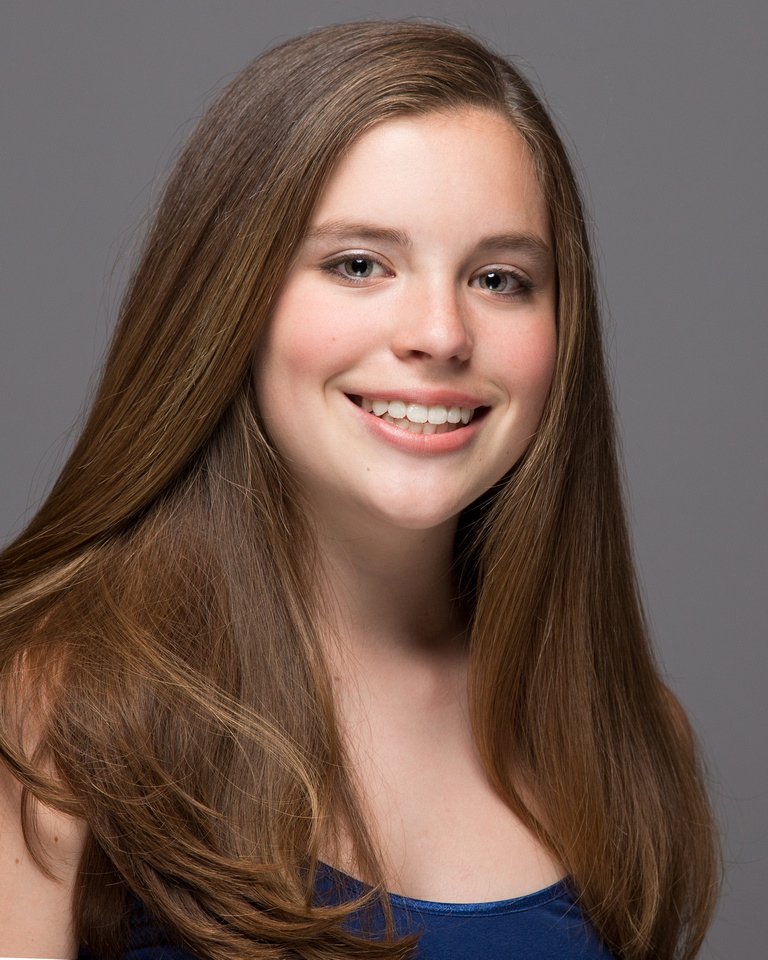 From here, the next move is dramatic, but the lighting setup hasn't changed at all.  What has changed is the camera position.  I've moved about 120 degrees to my right. Halley is now rendered in perfect profile.  I've taken the white collapsible muslin (which has a black side on the reverse), and placed it to what was the previously the camera left side of Halley, now behind her relative to the new camera position.  That prevents spill from the beauty dish from contaminating the background.  Why 120 degrees rather than a straightforward 90 degrees?  Because at a 90 degree angle, the coverage from the beauty dish provided more illumination on Halley's cheek and hair than I wanted.  From my position at 120 degrees, and turning Halley that extra 30 degrees toward me (leaving me 90 degrees from her - a perfect profile), the light is coming from slightly behind her, wrapping around her slightly, then falling off rapidly.  The result is beautiful, and dramatically different from the look with which we began the shoot. 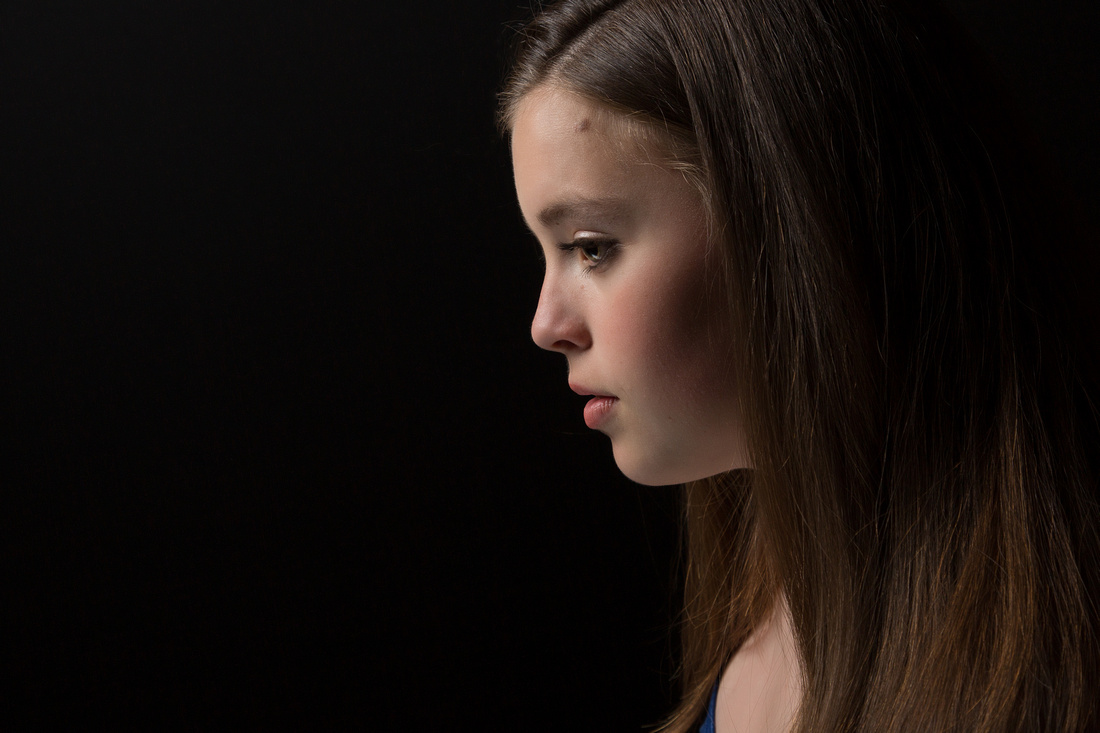