Some photographers (i.e. the good and famous ones), are noted for either a specialty, such as landscapes, or portraiture, weddings, sports, or whatever, while others are known for a particular style.  Then there are guys like me, who shoot everything under the sun, and hope that something sticks.  I'm being a bit hard on myself, because just about everything I shoot these days is in response to a request, whether paid or not.  So I've set myself up for this, and I'm certainly not complaining.  The point, however, is this: no matter what the assignment, whether it's a dance competition, headshots, a charity event, or family portraits, the photographer has to bring all of his or her skill, experience, and perspective to the assignment.  That doesn't mean pigeonholing the client's needs into the photographer's own "art"; it means drawing on the photographer's experience, technique, and ability to see and tell the story visually, no matter what the assignment demands.

My last blog post was in early February, and here it is in mid-April.  In the intervening weeks, I've had fourteen assignments, some requiring only a small amount of time, and others covering multiple days of shooting in high volume, with similar demands on the back end, editing and delivering the final images.

The first assignment came from the Advancement Office at Santa Margarita Catholic High School, where I volunteer my photography services on request.  This one was to cover the visit of Bishop Kevin Vann, the new Bishop of the Diocese of Orange.  Bishop Vann's visit to the school was his first public appearance in his new role, and the school was very proud to welcome him to celebrate the Mass.  This was the kind of assignment that demanded a quick turnaround, as the school and the Diocese both wanted photos as soon as possible.  This image was my favorite of the day, isolating Bishop Vann visually, with a diffused background of students in the gym. 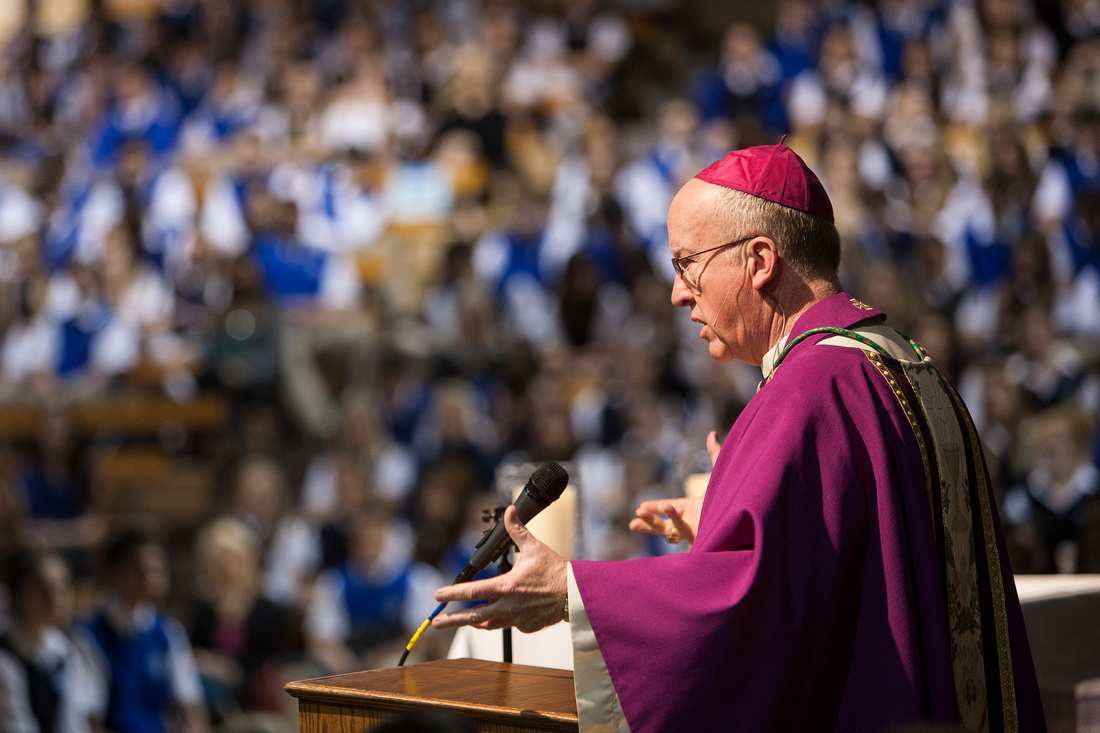 Later that same day, I traveled to the theater at Soka University in Aliso Viejo to photograph the first Winter Showcase of the JSerra Catholic High School performing arts department.  This production featured drama, musical theatre, dance, vocal, and instrumental music.  I shot two rehearsals and the performance over a two night period.  Lots of good images came from this venue; one of my favorites was of this violin player, whom I placed in the center spotlight during a break in the rehearsal.  Normally, performance photos are "found"; this one was "made". 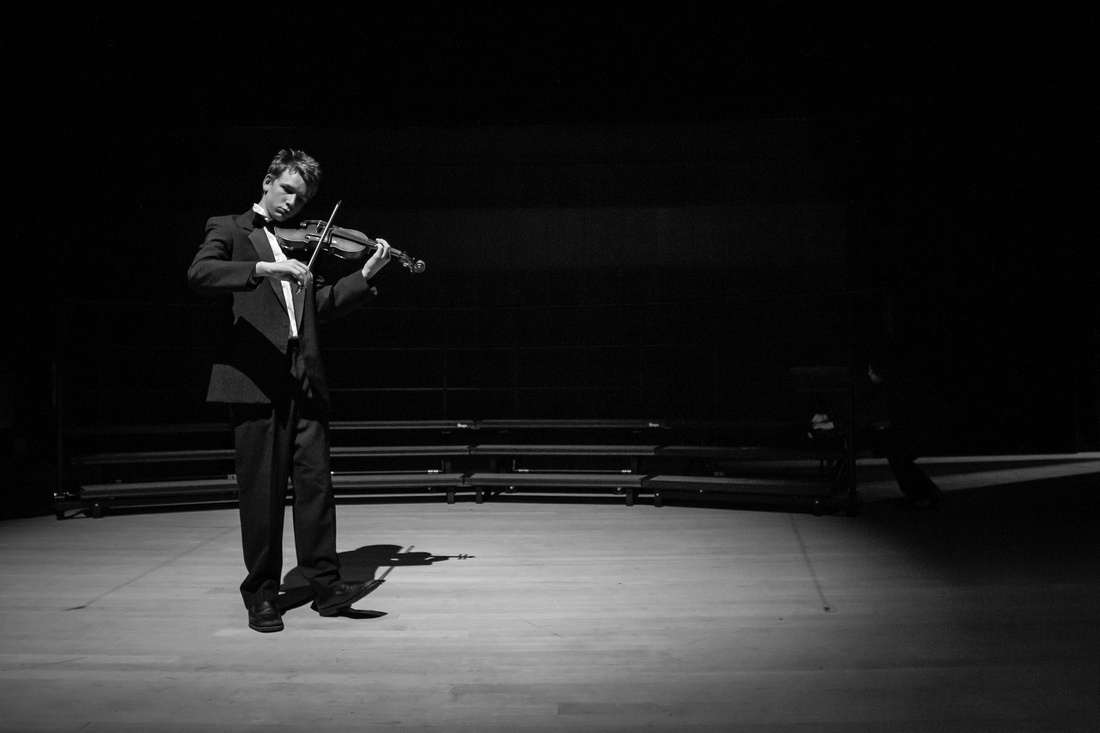 Two days later, still in a black and white mood, I covered another live radio broadcast of the Gary and Kelly Show on KSBR, featuring pianist and composer Brian Simpson. 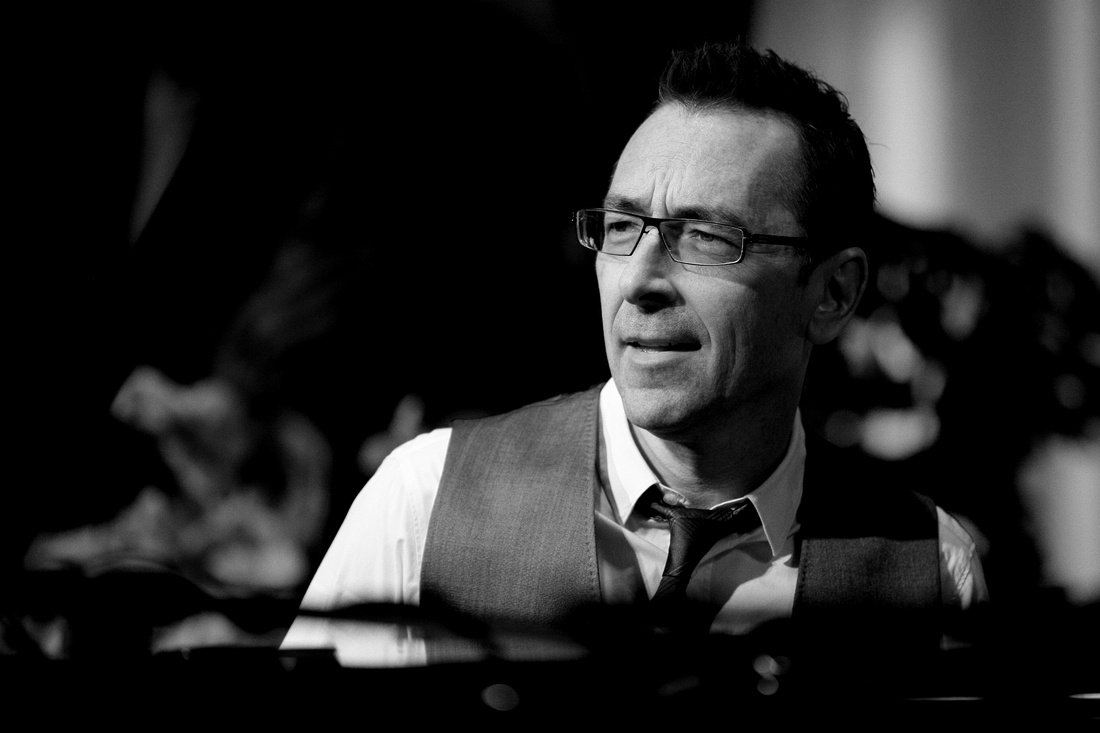 I picked up a new dance studio client, Center Stage Dance and Performing Arts in my hometown of Rancho Santa Margarita.  My first assignment was to photograph their Dance Team.  This engagement included photographing approximately fifteen groups and individual portraits of each dancer.  Because some of the groups were quite large, the lighting setup was intentionally broad, flat and flexible.  Not particularly artistic, but appropriate for the fast-paced progression of groups, individuals, groups, and more individuals.  So, from a photographic perspective, I can't say that this was an "artistic" result, but it was a success from the clients' point of view.  For my purposes here, the photograph presented below represented a highlight of the weekend.  This is Brooke Schulte, trying to replicate a jump attempted by a previous dancer.  In two attempts, she nailed it. 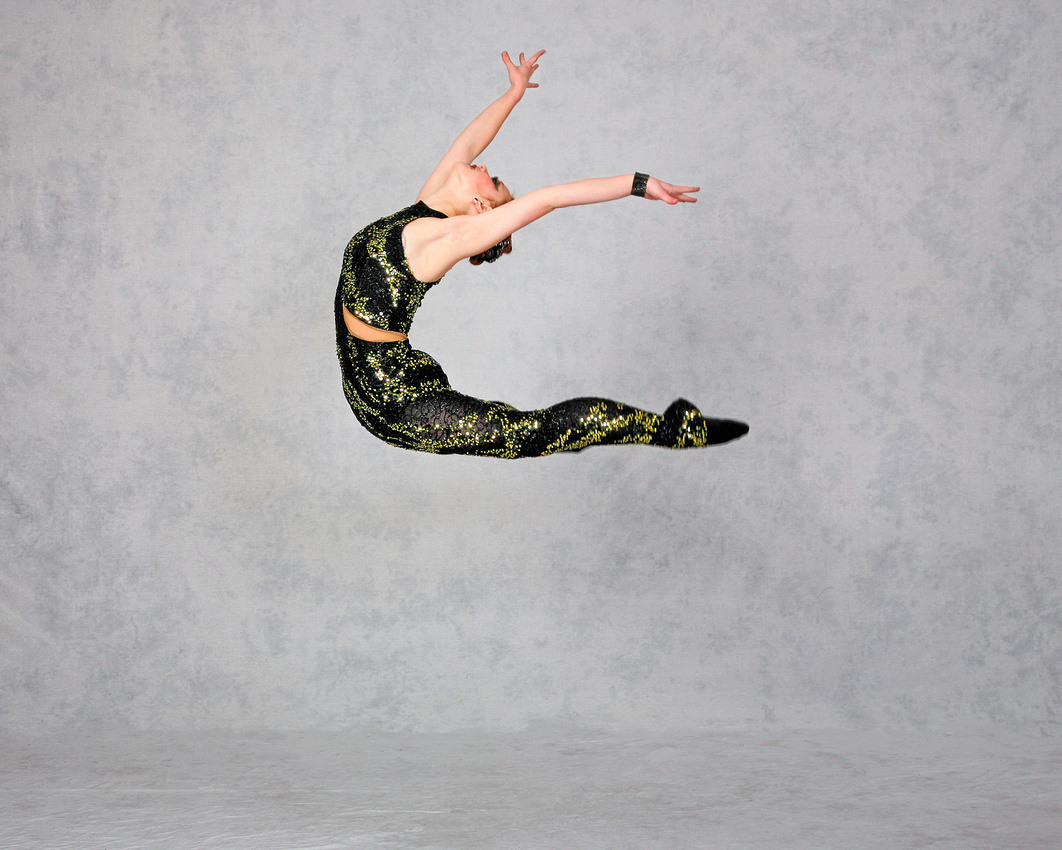 This was a high-volume project requiring about two weeks of editing and order fulfillment.  As soon as it was completed, I was back in dance competition mode, this time at Santiago High School in Corona, one of my least favorite venues.  Why?  Because the gym floor is the darkest place in the entire gym, and it usually requires significant post processing to pull anything usable from the captures.  This time, however, there was some sunlight filtering through the windows, enabling me to get some direction to the light and better shots than on other occasions.  Empty bleachers on the other side "helped", at least in that there were no other distractions back there. 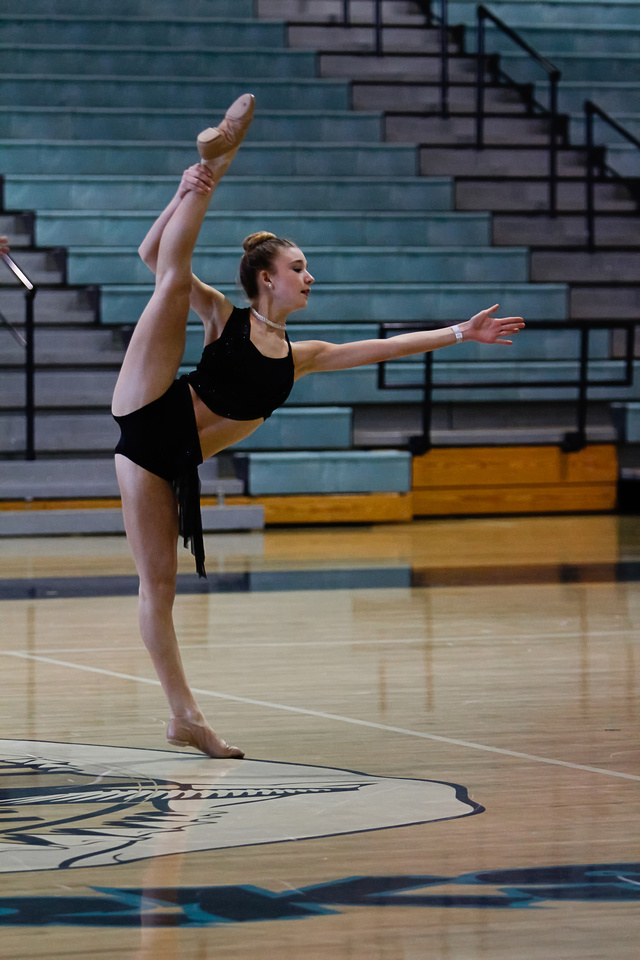 Two days later, I was in mid-afternoon sun shooting 65 members of the SMCHS Pep Squad.  Shooting in mid-day sun requires careful attention to mitigating the harsh shadows cast by the sun, which at this time of day is behind the camera-right shoulders of the girls.  Filled properly, the sun angle presents a pleasing rim light; improperly filled, it could be a mess.  The challenge here is wrangling all 65 members of the squad across the chosen location, taking into consideration the placement of the individuals as well as the curvature of the group, and lighting them effectively. 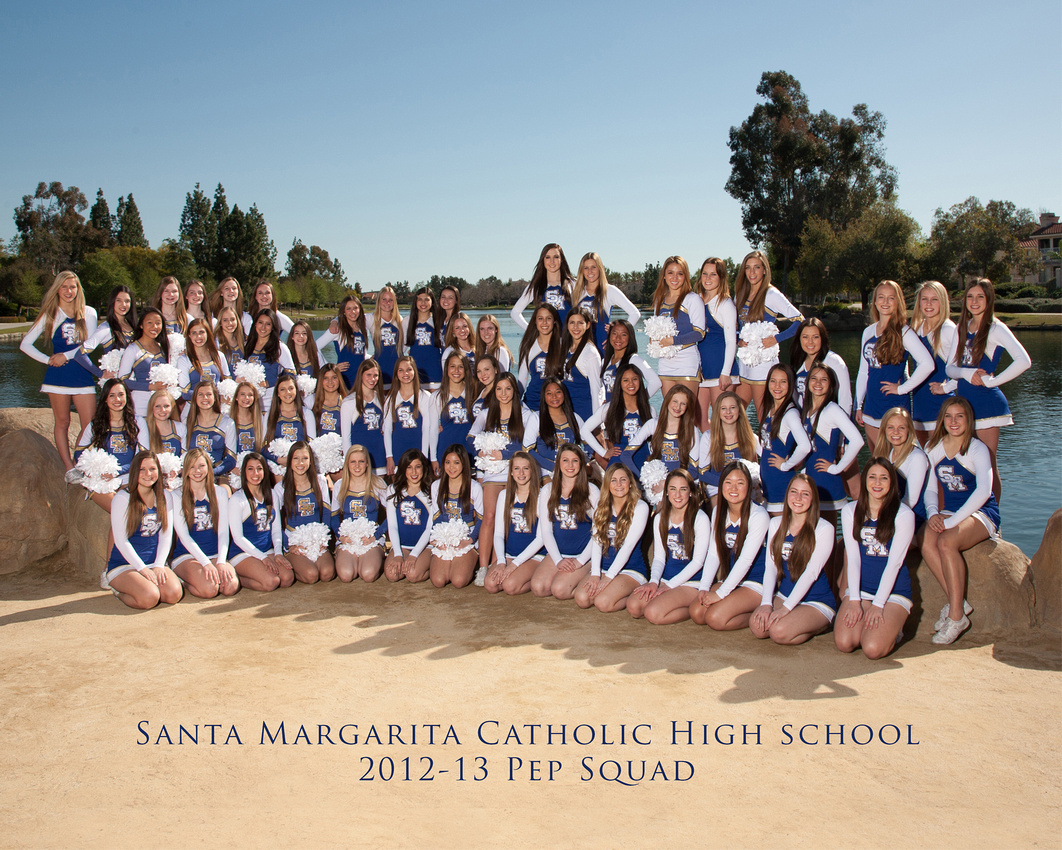 The location selected for the individual portraits provided the same challenge: harsh side lighting and deep shadow on the other side of the face.  Not really a problem, though.  I asked another squad member to hold a two-stop scrim just out of frame between the sun and the subject, and filled the face with light I could control, in this case a Qflash in a socked beauty dish.  At the end of the session, I asked one of the girls, Mari Yacoubian, to take a different pose for a more casual look, but I used the same technique to diffuse  the harsh afternoon sun and fill with flash. 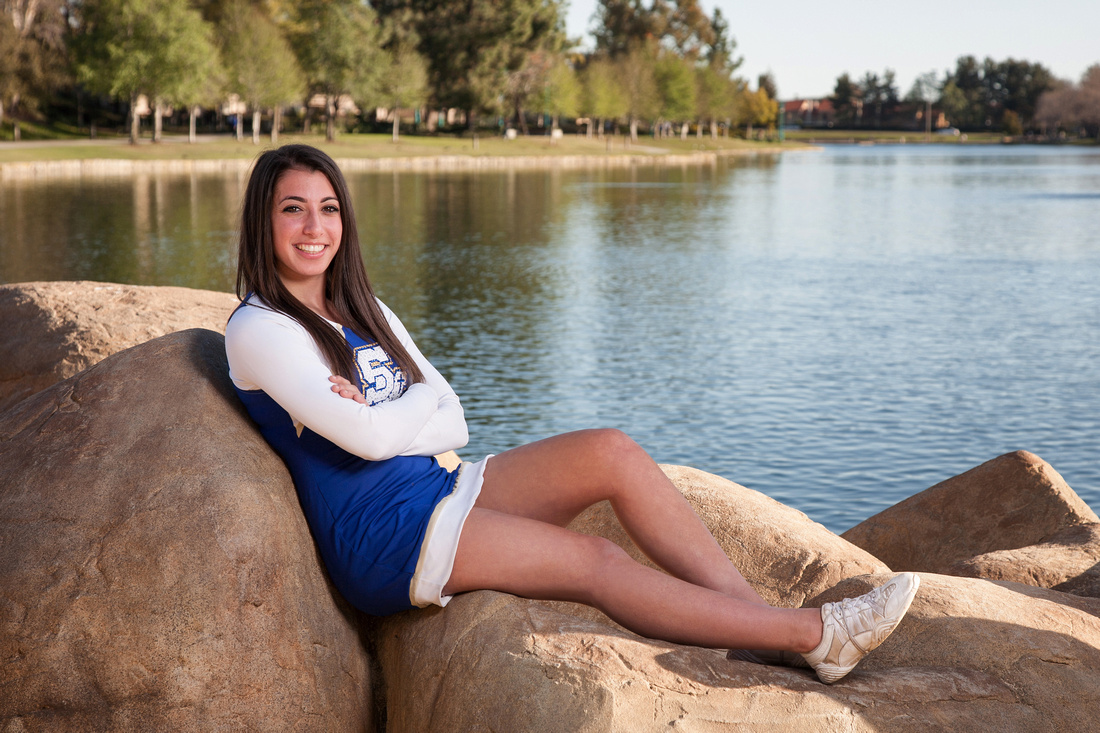 Two days later, it was young actor headshot time.  I've photographed the St. John's Episcopal School Middle School play for the past seven years.  This year's production is "Willy Wonka and the Chocolate Factory".  Big cast, young cast.  I tried a different approach here.  One light in a 72-inch diffused Westcott umbrella with a white seamless behind.  Placed properly, this one light gives an almost shadowless look vis-a-vis the background.  If you look closely at the catchlights in Lexi's eyes, you can see me, blocking the lower portion of the light. 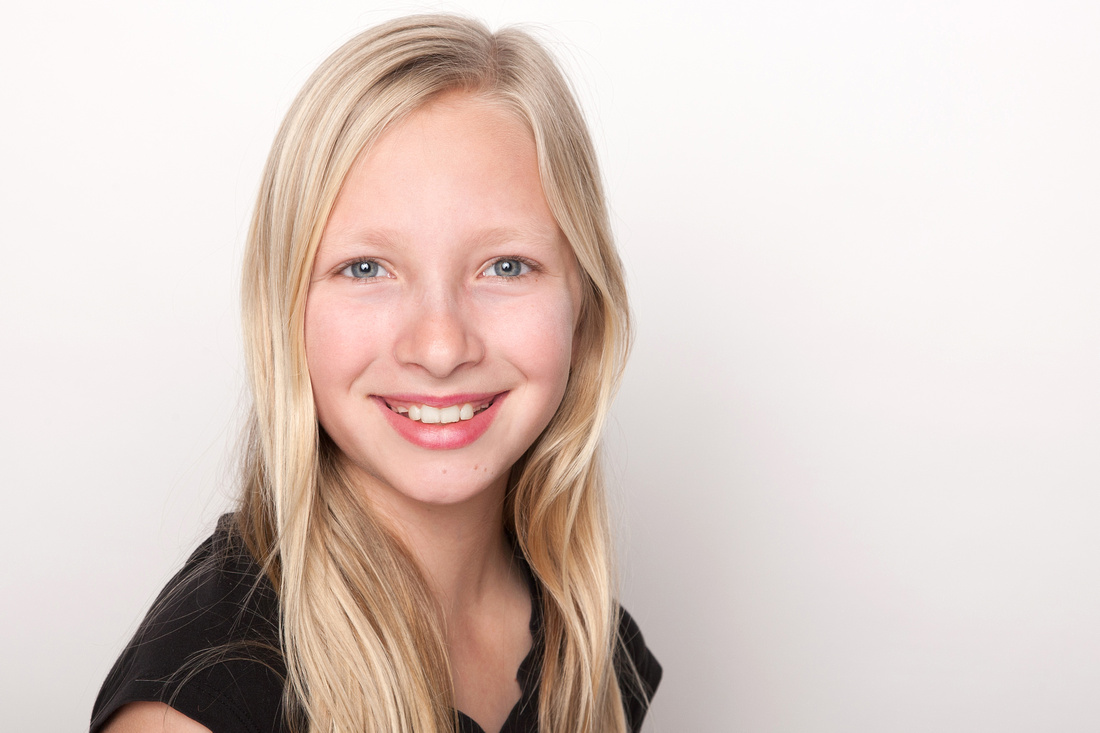 The very next day, it was back to high school dance competition, this time at Glendale High School for the CADTD State Championships.  I had never photographed anything at Glendale High School, so I wondered what kind of knuckleball this venue would present.  Friday night was the preliminary solo competition, held in the school auditorium rather than the gym.  Nirvanna!  No crappy gym light, no distracting gym floor or bleachers behind the dancers.  This was like studio competitions, but with no annoying competition banner behind the stage.  What could be better than that??  Here's what:  Ashley Traber of Saugus High School.  When I shot this, I knew she had nailed the leap; when I opened the image on my computer, I literally stared at it for nearly thirty minutes.  My favorite image of the year. 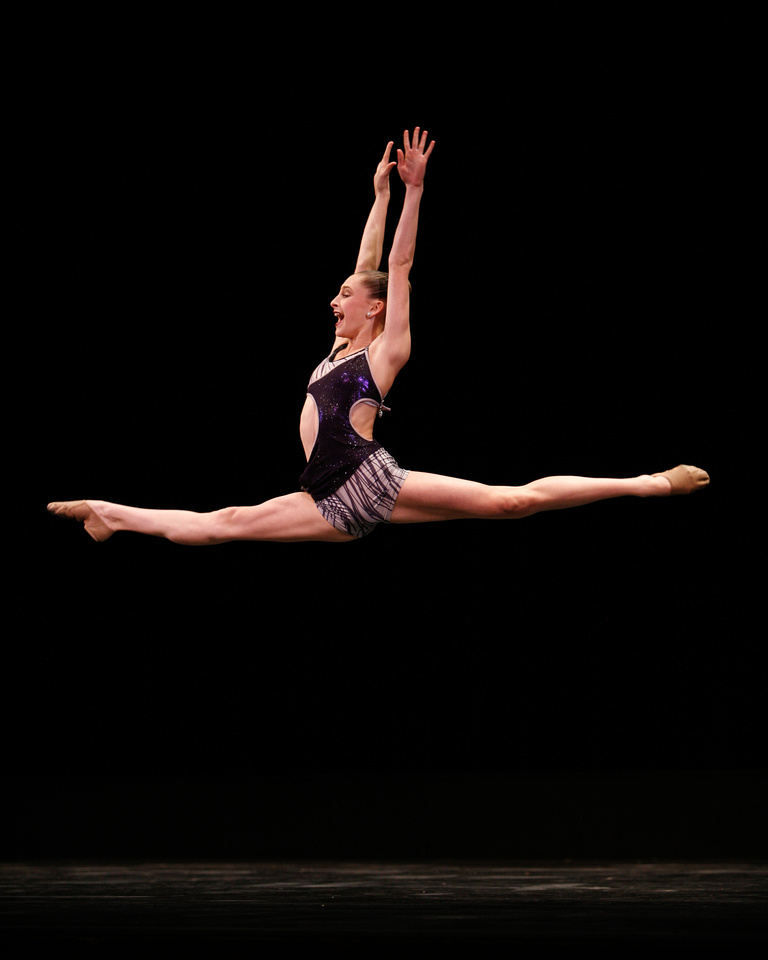 Well, this was the high point of the competition.  The rest of the event transpired in two gyms, one decent and one absolutely devoid of anything to work with.  I was spoiled.

I'd say that at least 75% of what I shoot involves performing arts or performers of one sort or another.  So shooting products and architecture takes me out of my comfort zone.  But for the past three years, I've shot the National Charity League Canyon Chapter's annual Home Tour.  It involves careful awareness of my own limitations of equipment (no Tilt/Shift lenses to mitigate wide angle lens distortion) and access to the properties.  So you get what you can, and concentrate on the environment, the details, and the people. 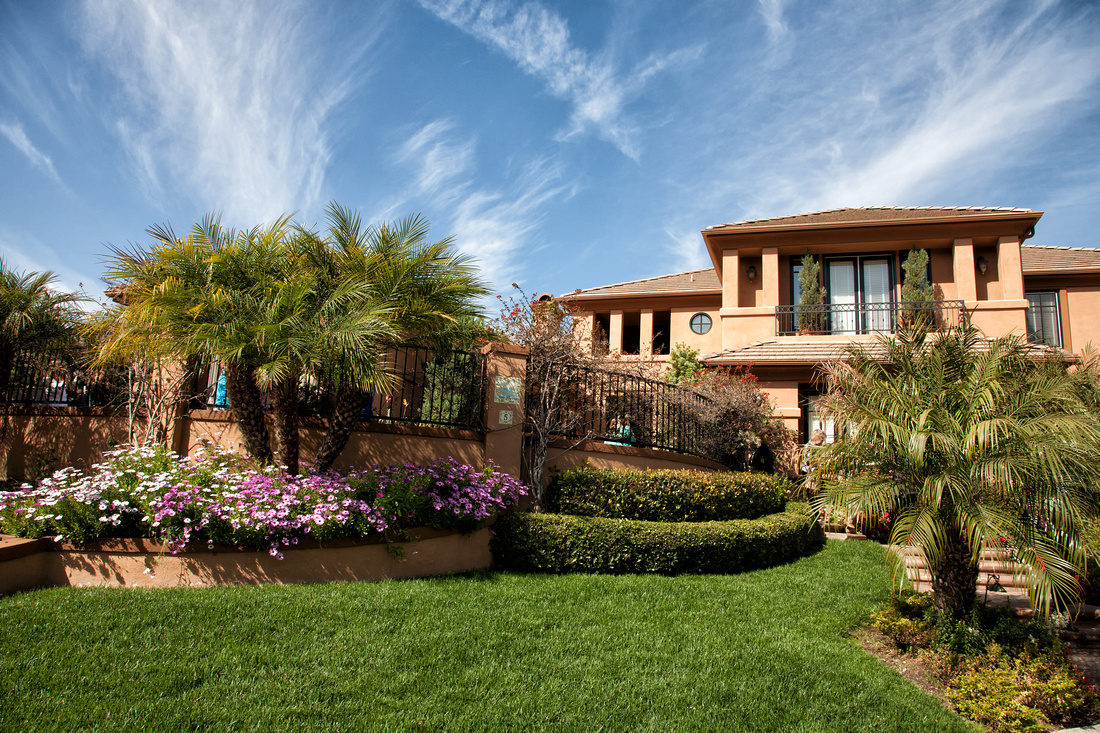 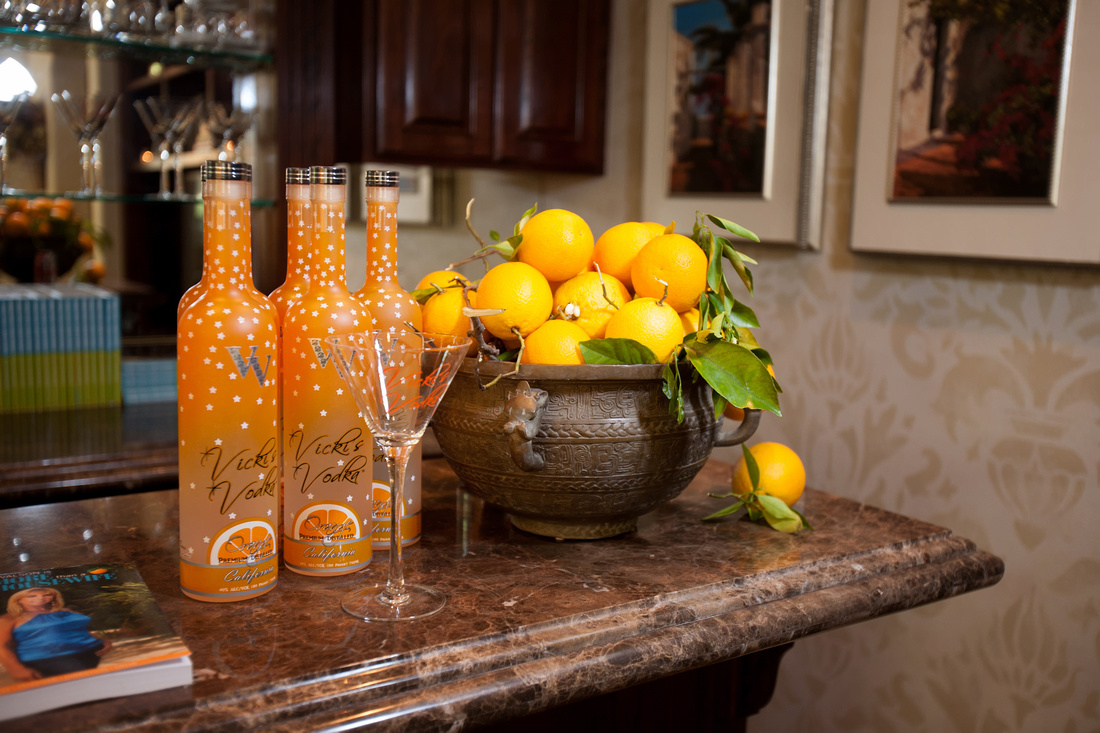 Three days later, back to performances.  I've been blessed with the opportunity to photograph the Tesoro High School choral groups twice now; most recently at their Spring Concert.  For this particular engagement, Director Keith Hancock asked me to get some shots of him directing the Madrigals.  This sounds like a pretty straightforward photo, until you realize that the subjects (Keith and the singers), are facing each other, and the photographer has no angle to capture both, except in profile, and even then, with no angle to get the whole group without Keith's back to me.  Well, I got those shots, and they're competent frames.  To get them, I concentrated on the Director, timing my shutter to his instantaneous movements.  But for me, the better shot was made in the tight corner of the stage, tucked in next to the singers, during the final rehearsal.  What did I see from there?  The light on Keith's face, bounced back into it from behind him via the sheet music on his piano.  Sheet music fill light; what could be more beautiful?

Two days later, it was back in mid-day sun covering the Special Olympics at SMCHS.  This was a huge event at the school, with hundreds of athletes of varying ages from all over Orange County competing in track and field events.  Lots of opportunities for good picture making.  My favorite of the day was this guy, the winner of his 50-yard dash.  It's the thrill of victory.  And as I said when I posted this shot on Facebook that day, there was no agony of defeat that day, anywhere. 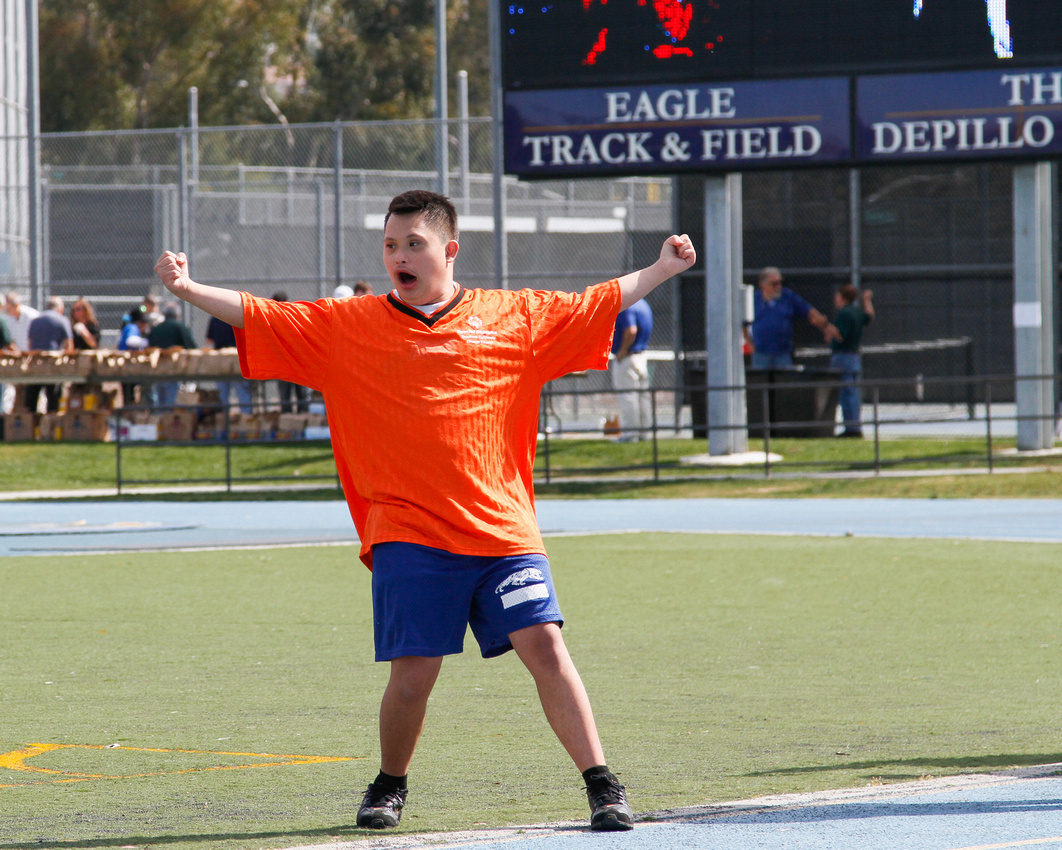 Two days later, a celebration of a different kind, the commissioning of Lieutenant Sean Watson into the United States Marine Corps.  I had photographed Sean first several years ago, as he came back to St. John's as a high schooler to portray the Cat in the Hat in St. John's production of "Seussical the Musical".  Little did I know that the next time I saw him, it would be on the Janss Steps at UCLA receiving his commission.  Photographically, this was actually a tough gig.  Absolute mid-day sun (high noon), in a ceremony that lasted only five or ten minutes.  Gotta get everything and get it quickly.  Followed by portraits of family and friends, while the restaurant was holding our reservation.  No pressure there....  So after the ceremony, I asked Sean to follow me to the colonnade at the front of Royce Hall, where I could find some soft yet directional, diffused light. Three minutes and we were out of there. 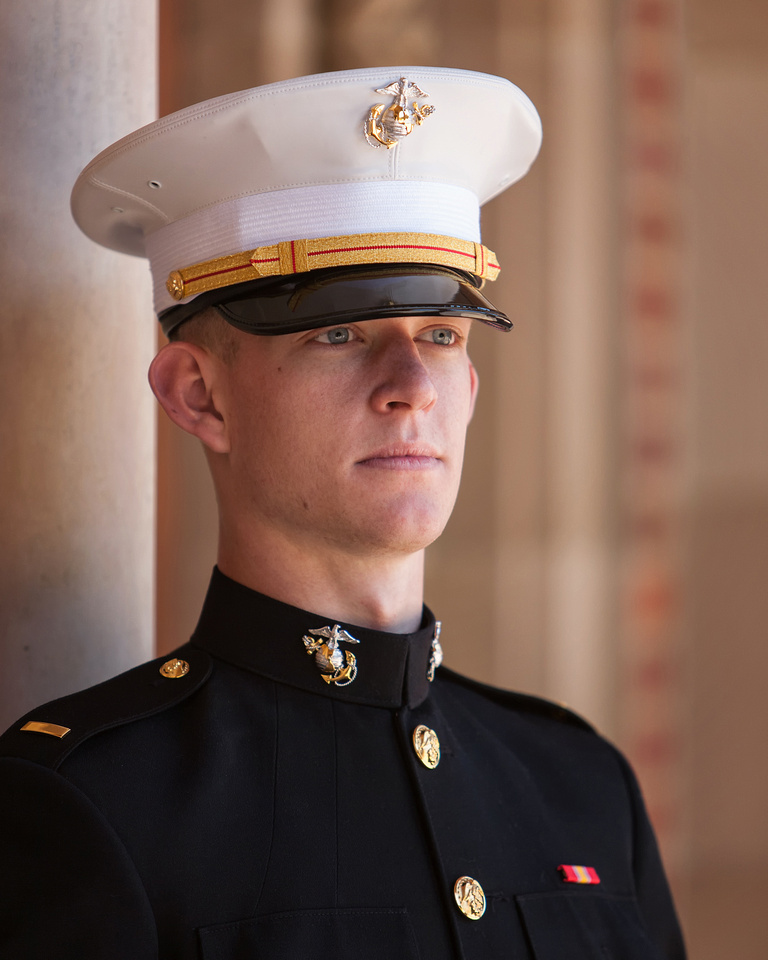 With all of this activity, I was a very busy guy.  But just when I completed delivery of all of these disparate projects, another one flew in over the transom.  One of my favorite dancers, Emily Justiniano, needed some senior photos quickly.  I mean, like now.  Her mom had an idea to create some cap and gown shots with Emily en pointe, so off we went to the Mission Viejo Library to place Emily in the stacks.  I had done a variation on this theme two years ago with the seniors on the SMCHS Dance Team for a calendar project, so this was an easy task.  One speedlight in a Westcott Asymmetrical Strip Bank and we had the shot.  The scholarly dancer who's going to study the human body. 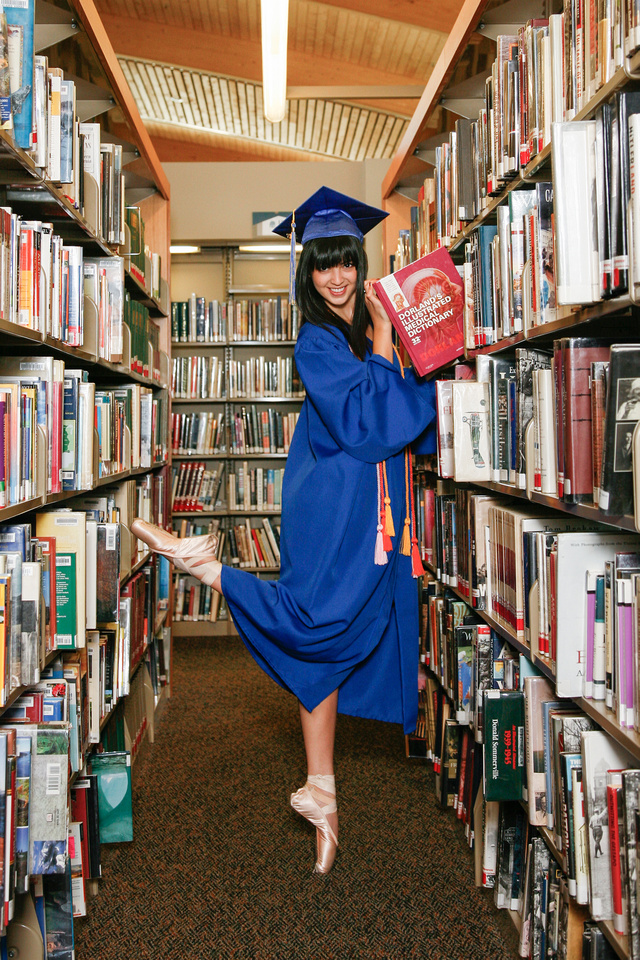 Emily wanted some more "traditional" senior portraits, so we went over to the windows for some casual, relaxed looks.  No lights, no reflectors, no nothin'. 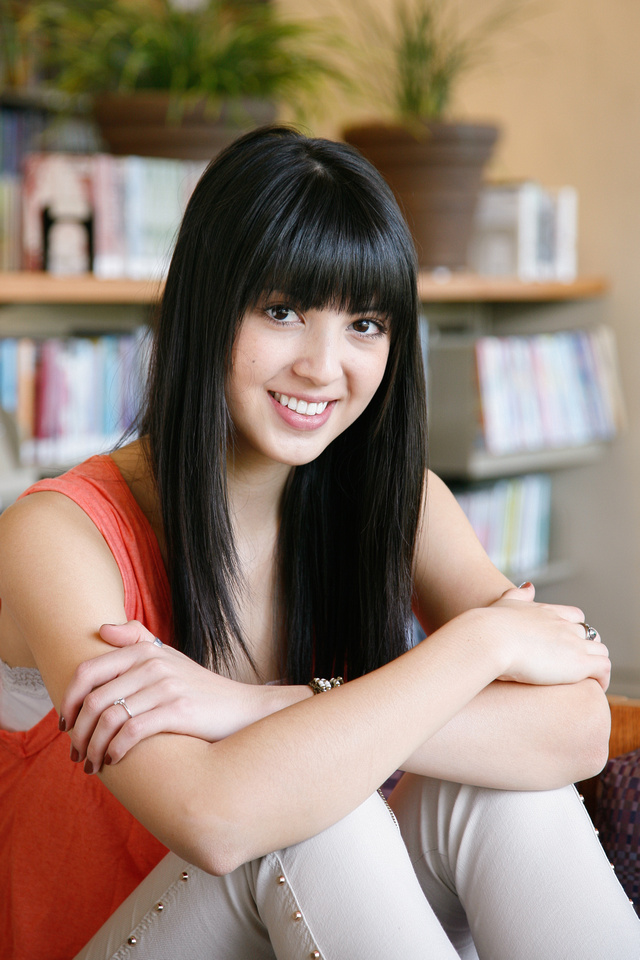 That night, I delivered her favorites of the day, in time to make her deadlines.

Right now, I'm smack in the middle of the busy season.  This week it's more volunteer work at SMCHS, including shots for the school's publications,  plus rehearsals and staging of a runway fashion show fundraiser and the Middle School play, all in the same week.  Then it's more portraiture, and vocal and dance concerts followed by studio dance recital season.

I need a bigger hard drive.  And vitamins.