Sophie, On a Moment's Notice 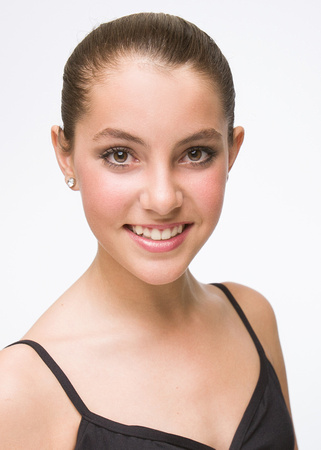 Lots of good, young, ballet dancers aspire to attend summer intensive workshops put on by some of the most prestigious ballet companies in the nation.  To be accepted, the girls need to submit an application, accompanied by a photo of the dancer doing one or more ballet poses, including an arabesque, and a headshot.  Many times, a dancer (or a bunch of dancers at a studio) will simply have a mom or dad with a camera snap a frame or two at the studio and submit them with the girls' applications.  So these apparently don't need to be portfolio shots, but they get the job done.

Me?  I'm not satisfied with that approach.  I've done several of these audition sessions.  Until last night, my approach has been to set up a white backdrop, whether muslin or 12' seamless, and light the heck out of it.  Last time I did this, I set up two completely separate shooting sets, one for the dance pose and another for the headshot.  The dance pose was lit by four moonlights, including a key fitted with a big octa, a broad umbrella fill, and two accent lights in stripbanks.  The headshot was lit with a Qflash in a beauty dish augmented with two speedlights to hit the back.  Lots of setup time, but when you're shooting a dozen or more girls, the results were worth it.

So yesterday (Wednesday), I got an urgent phone call from a mom whose daughter, Sophie, needed an arabesque/headshot combo for an audition this weekend.  She needed the photos ASAP.  Uh, okay....  I'm thinking to myself, how am I going to pull this off?  No time to set up the usual grid, and I certainly don't want to set up two.  But the most important aspect is the need to have a qualified ballet instructor present to ensure that the pose is good, and that the image selected is the best one captured.  So I immediately called the studio, whose staff helped secure the assistance of one of the instructors who kindly agreed to stay after her last class to help with this.

Knowing that the instructor would stay after class was a big relief, but the pressure to set up quickly and efficiently to not abuse her generosity weighed heavily in my thoughts on the approach I decided to take.  First off, no backdrop.  Setup time for the seamless is not long, but steaming a muslin would be out of the question.  Instead, I decided to use the environment of the studio, including the marley floor and the ballet barre as a setting.  My lights of choice: the Qflash T5DR mounted in a Photek 60" Softlighter to provide a big, soft, pillow of light.  It was set just to the left of the camera position, because I wanted to get a slight gradient effect from left to right as the light falls off.  In post, I decided that the gradient was a distraction, and a quick fix in Lightroom took care of that.  The other light was an unmodified speedlight from camera left pointing to the wall, to add a bit of spark to Sophie's face and knock down the barre shadows just a bit.  Manual mode, maybe 1/32 power.

We needed to get in and get out quickly, so I put together the Qflash and Softlighter at home and brought it to the studio already assembled. I even decided on exposure settings ahead of time: ISO 400, f/6.3 at 1/160 of a second.  I set the Qflash to give me that at around 6 feet away from Sophie. I also mounted the speedlight on a small stand at home.  On arrival, all I needed to do was mount the main light on a C stand and check the exposures of both the key and accent lights with my trusty Sekonic flash meter.  Total setup time: less than five minutes.  Call in the instructor, make about 20 frames, and here's the result:

I'll take it.  Sophie's form is good, the instructor's happy, Sophie's happy, and that's what matters.

So on to the headshot.  I brought a popup Westcott black/white reversible "Illumimator" muslin with me.  Allowing it to spring open and propping it up on the floor against the wall, it became my backdrop.  I put Sophie on a stool about two feet in front of it.  I moved the speedlight on the stand to a position immediately behind Sophie (so as not to see it), opened its zoom setting to it's widest at 14mm, aimed it at the backdrop and metered it to just clip behind her head (giving me f/16).  I then moved the Softlighter to a position about 3 feet from Sophie at about an 11:30 position.  Not quite straight over camera position, but close.  Dialed down the power and metered her face at f/8.  I then asked her mom to sit on the floor in front of Sophie and hold up a white foamcore fill card just out of frame below her chest.  Total setup and test time, less than five minutes.  Because Sophie has a perfect face, about ten snaps later we have this: 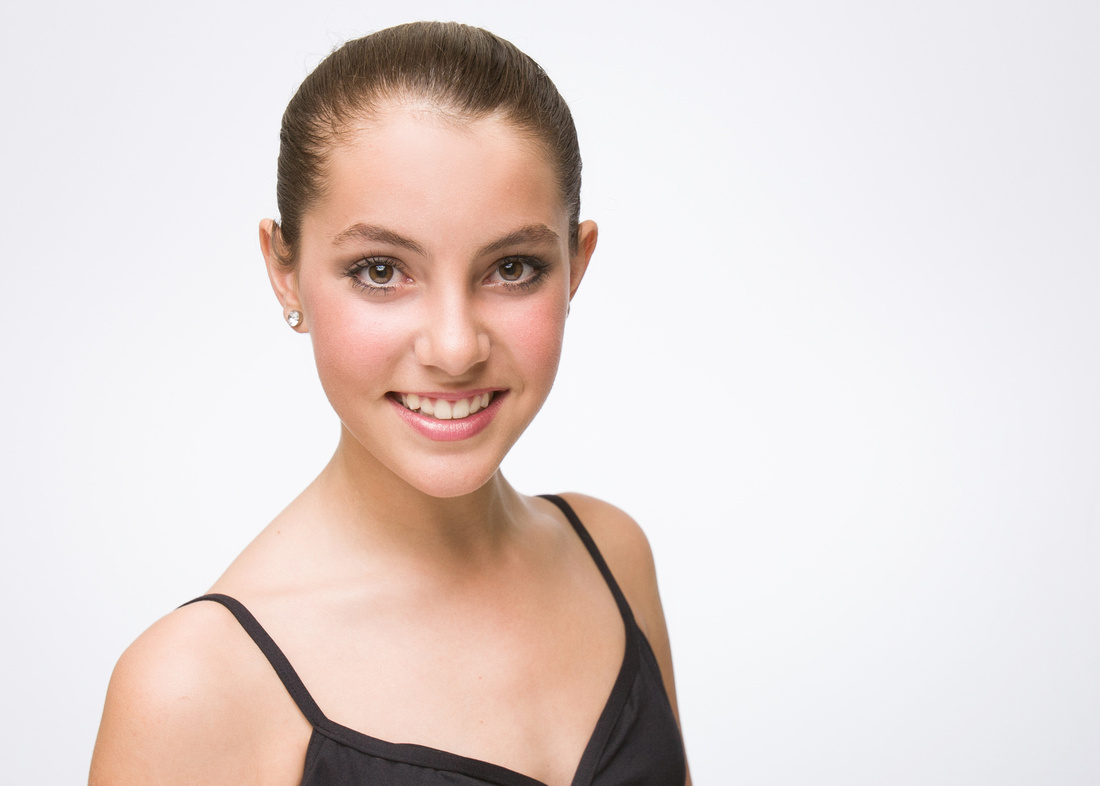 I like delivering headshots in landscape orientation.  It allows me to put the subject's name in an attractive font to the side of the image if desired.  Plus, I just like the look of a horizontal headshot better than the old-school vertical.

So, from arrival at the studio to turning the lights off and locking the door, we spent less than an hour.  Post-processing at home was minimal, including cloning out some distractions on the floor and wall on the arabesque shot, and not much on the headshot.  Delivered five shots to Sophie's mom last night via email.  She prints them today, and Sophie's good to go for Saturday.