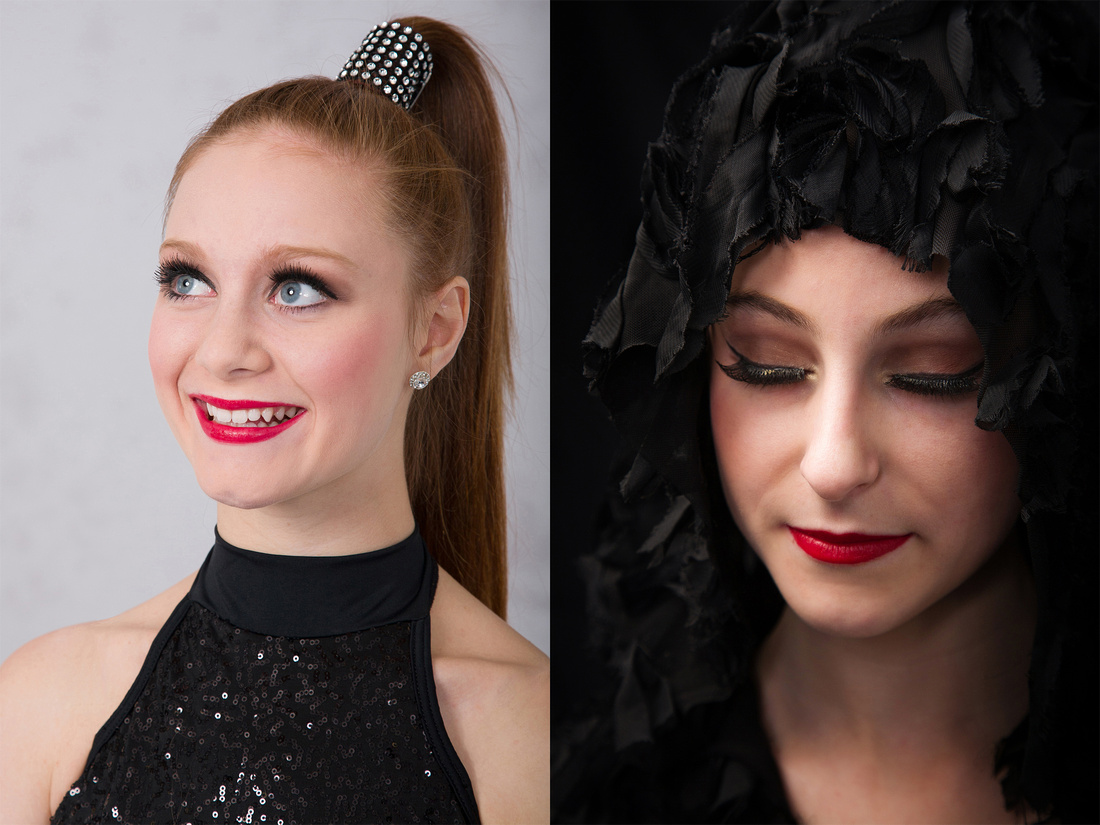 This past weekend, I did a promotional shoot for the Center Stage Dance and Performing Arts studio in my hometown, the beginning of what I hope will be a lasting relationship.  The purpose of this shoot was to create a promotional poster to be displayed in the studio for some upcoming portrait shoots at the studio, including individual and group shots.  Some of the groups will be rather large, and the individual shots may be static full-length portraits, tighter headshots, or aggressive jumps and leaps.  There won't be time to change the lighting setup between shots, so the set and lighting grid will have to be broad, open, and flexible to accommodate shooting changes on the fly.  Typical dance studio environment for me.

But the point of this blog post is that broad, open static lighting setups can still yield vastly different results, with only minor modifications and no change to the basic lighting grid or even exposure settings in camera.

The two shots above were made with the same single light, in the same position, with pretty much the same exposure values in camera.  The shot on the left is Brooke, made before we started, as nothing more than a lighting/exposure check.  I wanted to make sure that my key light, a monolight mounted in a 53" octagonal softbox located 45 degrees up at camera left was positioned so as to capture light in the eye sockets and not leave them "hooded".  I placed Brooke about five feet from the octa and asked her to simply look at me and we made a test.  It was fine in terms of light placement, so I asked her to look at the light, and the result is what you see on the left.  The gray background you see is a big Westcott "Pearl" backdrop mounted horizontally to give me 24 feet of lateral coverage for a large group.  It's lit with another broad fill light in a 60" umbrella at camera and two more lights in stripbanks at the wings to guarantee even fill across the entire sweep.  But for all practical purposes, Brooke is lit entirely by the key light in the octa.  The exposure was made at ISO 200, 1/160 second at f/7.1 (to give me sufficient depth of field for a group shot).  I tweaked the exposure a bit in Lightroom, giving me what would effectively be f/6.3.  Done deal.  I didn't measure the light at various places on her face, but the lighting is pretty even, showing decent but not overly dramatic rotation between light and shadow.  Very forgiving light, good for fast production shooting on a schedule.  I went manual for the rest of the day at 1/160 at f/6.3.

As we moved through the planned shots for the day, Jacqueline took her turn, dressed in a black costume with a neat, intricate hoodie.  I knew right away that I wanted a dark and moody headshot with the black hood enveloping her face.  But with everyone waiting and much more to shoot, there was no time to change the lighting grid or the set.  How to accomplish what I envisioned for Jacqueline?  Easy.  Bring her right next to and parallel to the octa, add a black panel behind her to cut the pearl backdrop and attendant lighting on it, and hold an additional 2 stop diffuser between the octa and Jacqueline.  She's about 8 inches from the octa's front diffuser, and the handheld 2-stop is no more than 3 inches from her shoulder, just out of frame.  The location and power level on the key light haven't changed and the exposure value in camera is still f/6.3 at 1/160.

But the difference is dramatic.  The light is much softer; the shadow rotation is rich, and the effectively larger source of light wraps around the hoodie into the recesses of her face next to her eyes.  This is all due to the proximity of Jacqueline to the key light and extra diffusion between the light and her face.  These two images couldn't be more different.  The time needed to set up this second shot?  About 30 seconds.

As is so often the case, thanks go to Joe McNally for this one.