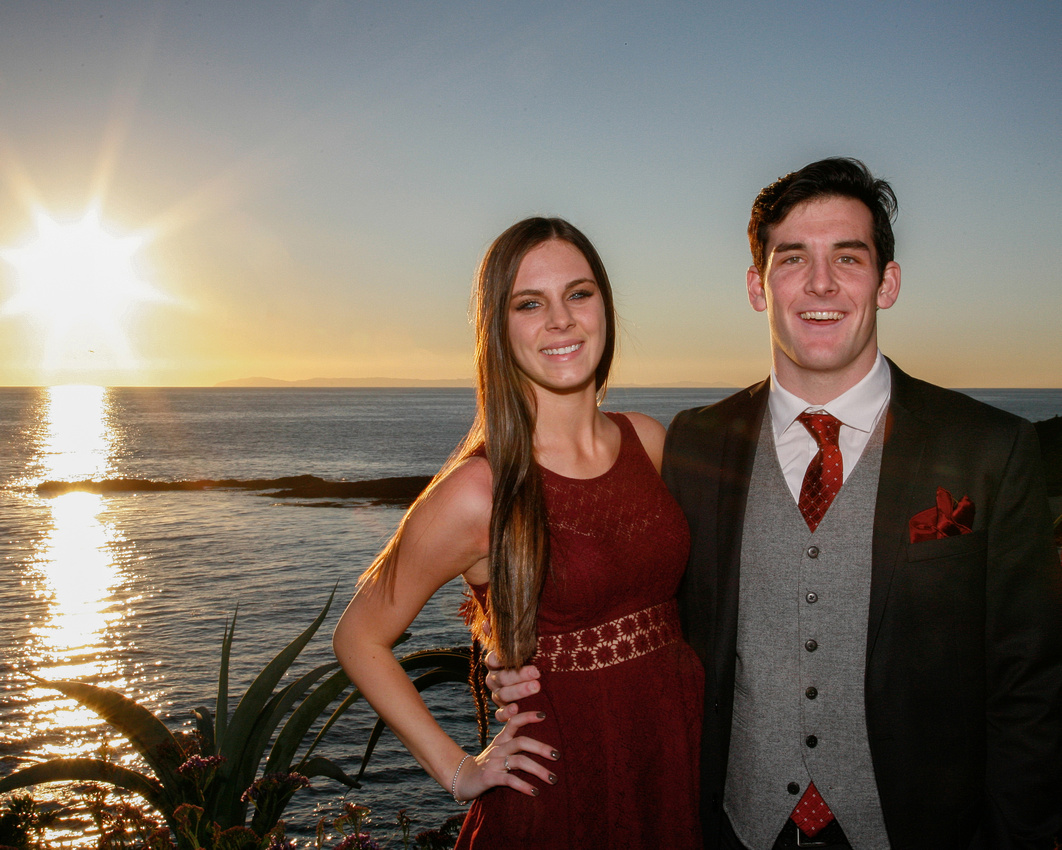 High school dances are a lot different today than when I went to school, back in the middle of the last century.  These days, at least among Katherine's cohorts, a high school dance is first and foremost a fashion show and an opportunity to take pictures before the gig.  What comes after is apparently anticlimactic (or so I hear).

This year's photoshoot was scheduled for sunset on the grounds of the beautiful Montage Hotel overlooking the ocean in Laguna Beach.  It's a favorite spot for this sort of thing.  Last time we did this, a blanket of fog enveloped the hotel and beach, giving the kids and their camera-toting parents a lot more dampness and softness to the light than they bargained for.

This time, we had the opposite circumstance, a cool, cloudless, low-humidity afternoon, producing hard, slashing, brilliant, unforgiving, blasting light.  The girls and their parents were scrambling to find light that (a) didn't produce squints, or (b) didn't produce absolute silhouettes when shot into the western sky, or (c) didn't produce razor-sharp delineation from blown highlights to deep shadows on their faces.

That's the problem that slashing sunlight gives you.  Undiffused by clouds, the sun's a highly directional, pinpoint source of light, putting out more photons than a billion hydrogen bombs.  It travels in a straight line, packing a punch.  It does not fall gently, gracefully on the face, filling the shadows nicely.  It hits hard, and to get a good image, you have to fight back.

Okay, how?  Well, first up, you probably want to avoid the squints by putting the sun to the subjects' back.  This is why you're at the Montage at sunset in the first place, right?  Then, to avoid the absolute silhouette, you need to bring your own punch, in this case, a simple 580EXII speedlite. If this were a commissioned shoot, I'd consider bringing in a big light and an octa or at least an umbrella, and have a chance at overpowering the sun.  In this mob scene, that's just not gonna happen.  So instead of walloping back, I'm just going to jab, with the most mobile setup I can bring.  I'm not even going to drive the flash into high speed sync.  Instead, I'm going to peg my exposure at the native sync speed of 1/200 and let the aperture go wherever it will, to give me a nice baseline exposure for the scene behind my subjects.  In this case, it's about f/16 or so, not your typical portrait setting, but who cares about shallow depth of field when the nearest background element is 26 miles offshore?

So then, it's a matter of balancing your exposure on the faces, lit entirely by the flash.  In the shot above, I wanted to bring the sun into the frame, which drove my aperture way, way down (the camera was squinting).  That meant cranking the little speedlite to the max, full power.  Undiffused, except for a Stofen Omnibounce, it cried for help but gave me enough to light Katherine and Chris.  Still not as powerful as the sun, which left a nice rim light on the couple.

Moving the sun out of the frame, I was able to give the speedlite a bit of a break, and reduced the power to give me this: 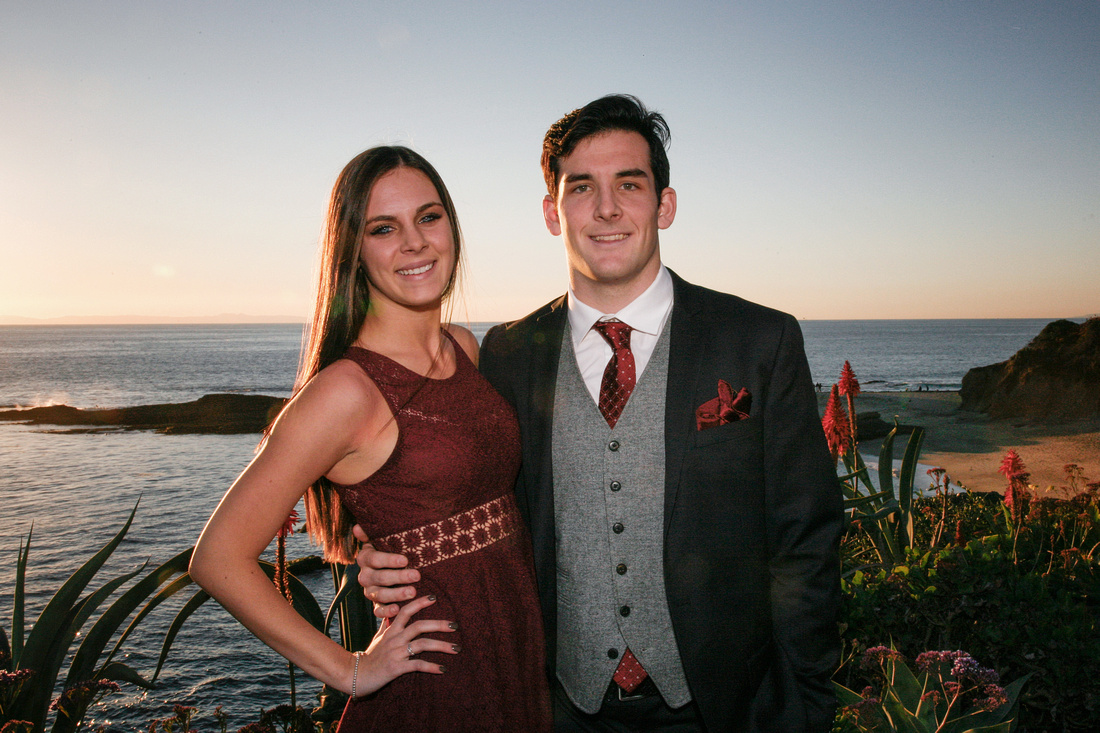 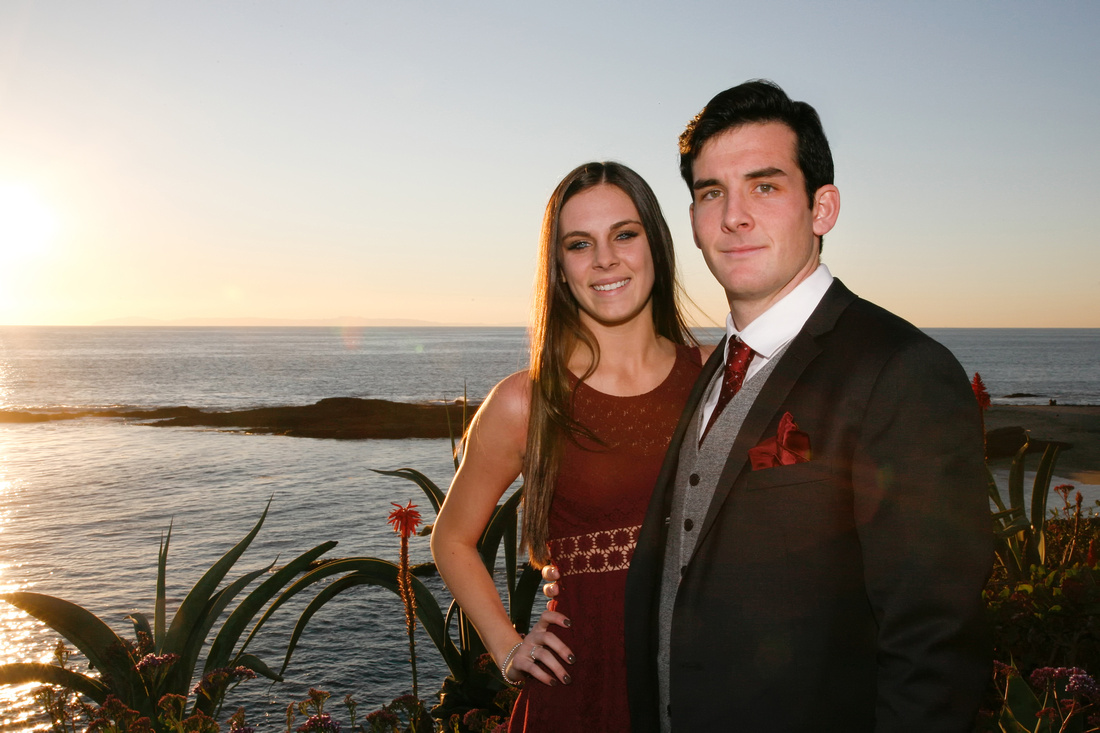 I liked this pose especially for Chris, and thought it might make a pleasing black and white conversion: 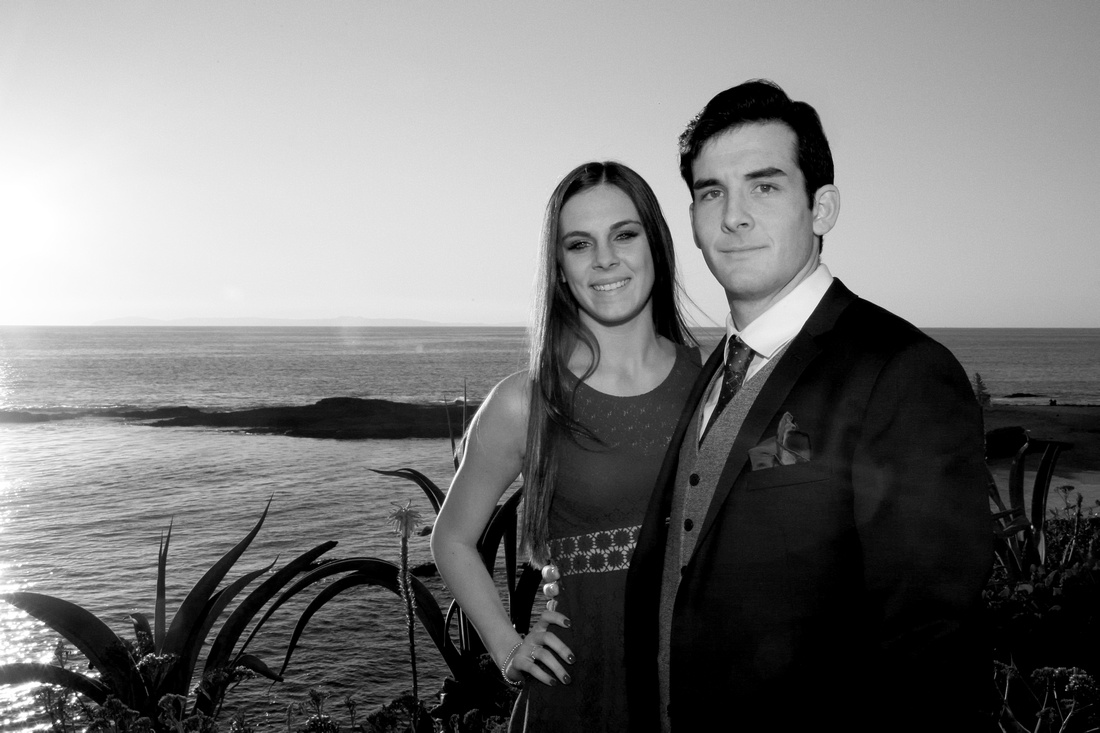 I finally settled on this composition: 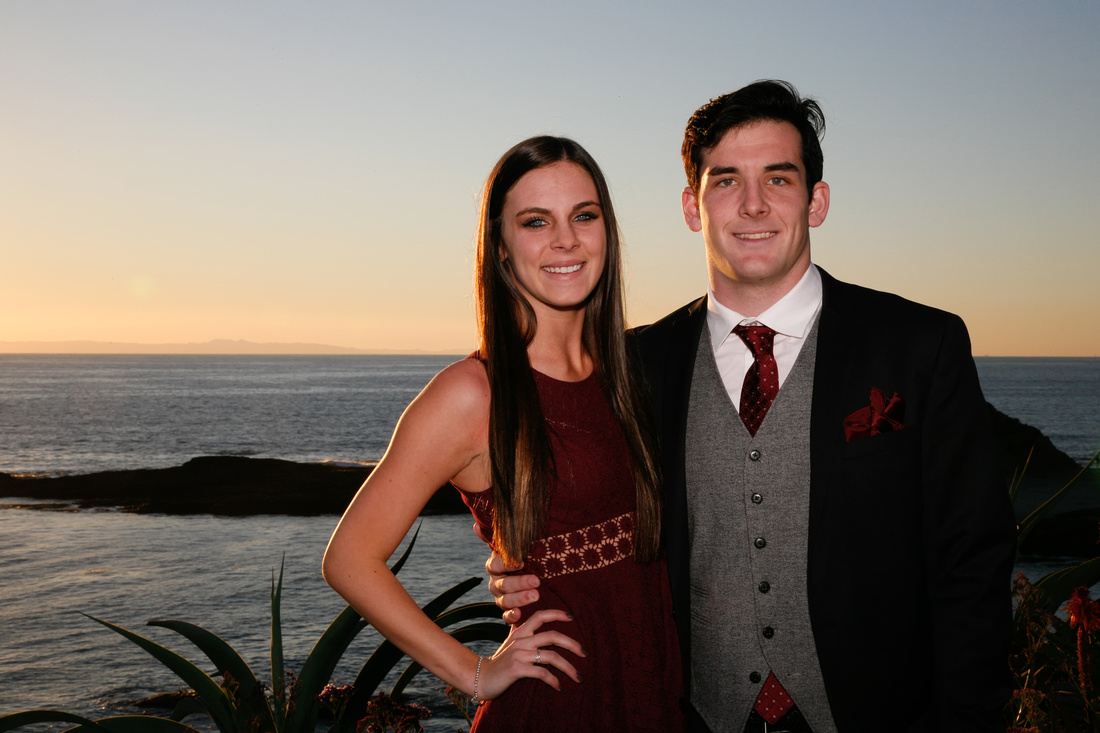 As the sun gets lower in the sky, it begins to lose some of its punch.  It's still highly directional, but you can have your subjects look in the general direction of the light without overly squinting.  Color balance becomes an issue, but a late afternoon shot like this can be effective and very pleasing, if your subjects are. 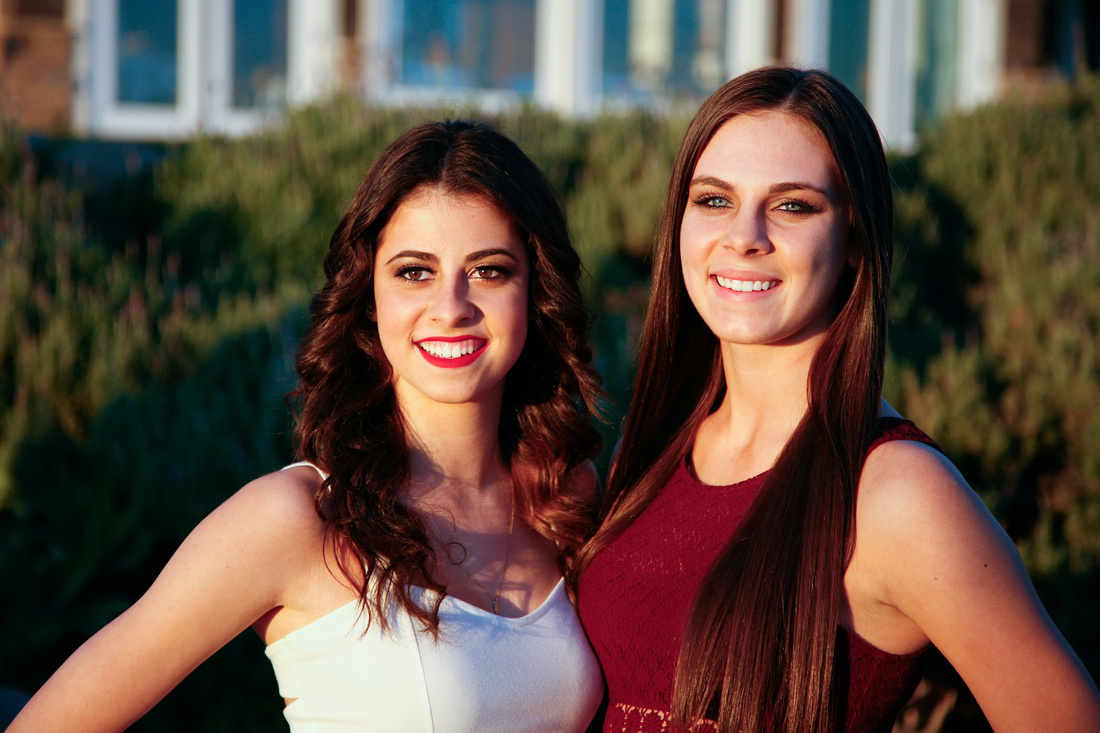 Of course, there are other problems with slashing light, and several ways to deal with them.  As mentioned at the outset, the transition between blown highlights and deep shadows can be very stark, which is rarely a good thing in a portrait, especially portraits of beautiful young ladies.  So you take what the light gives you and follow its lead.  No longer a boxing match, it's now a dance.  Instead of trying to bring the exposure down to a conventional level, you go the other way, and fill the shadows with overexposure in camera.  Here, there's just a hint of fill flash, not even pointing directly at the girls. 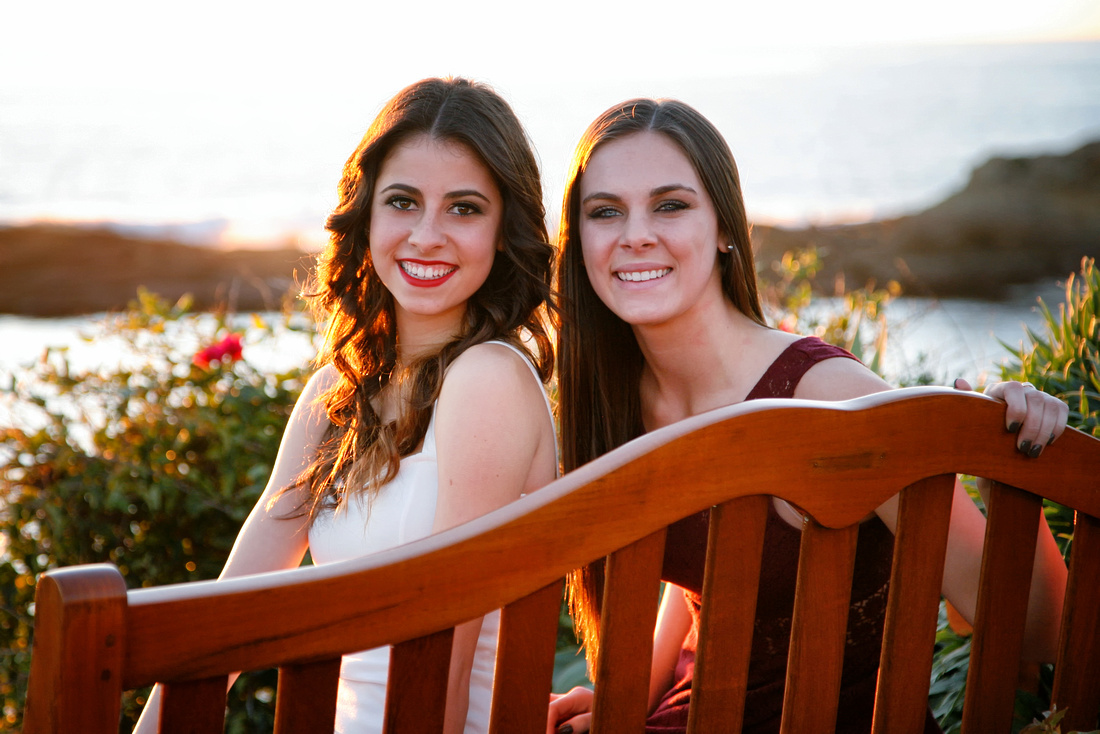 You can also achieve this in post processing, going high key to even out the transitions between highlight and shadow.

This is nowhere near what the human eye sees at this moment in time, but it's a great way to solve a problem that the camera's limited dynamic range can't handle.

And here's the interesting part...the difference in time between the final shot above and the scene below: about five minutes. 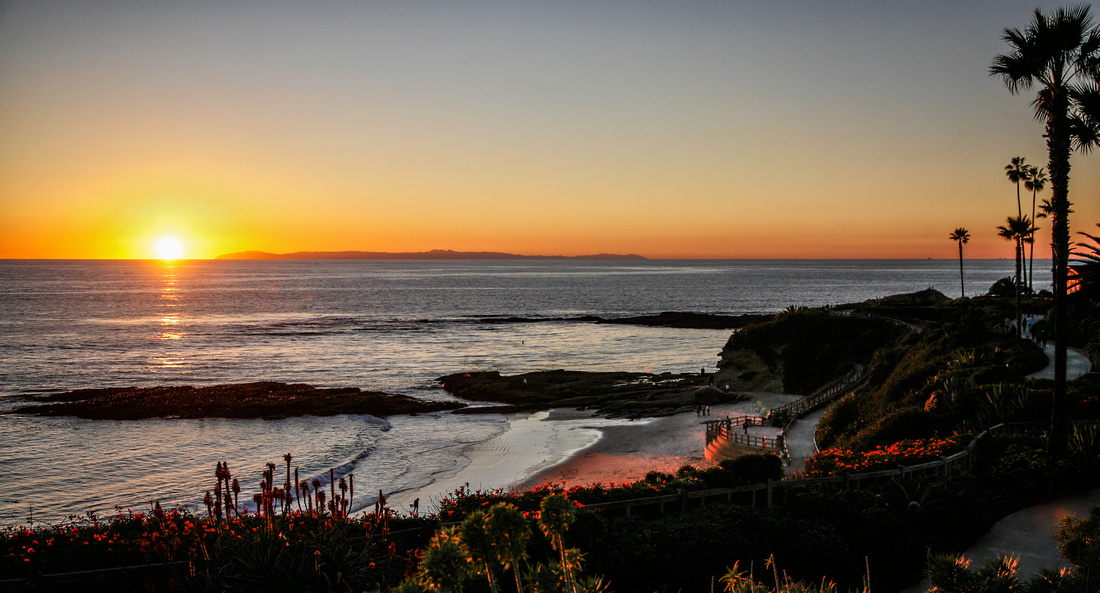