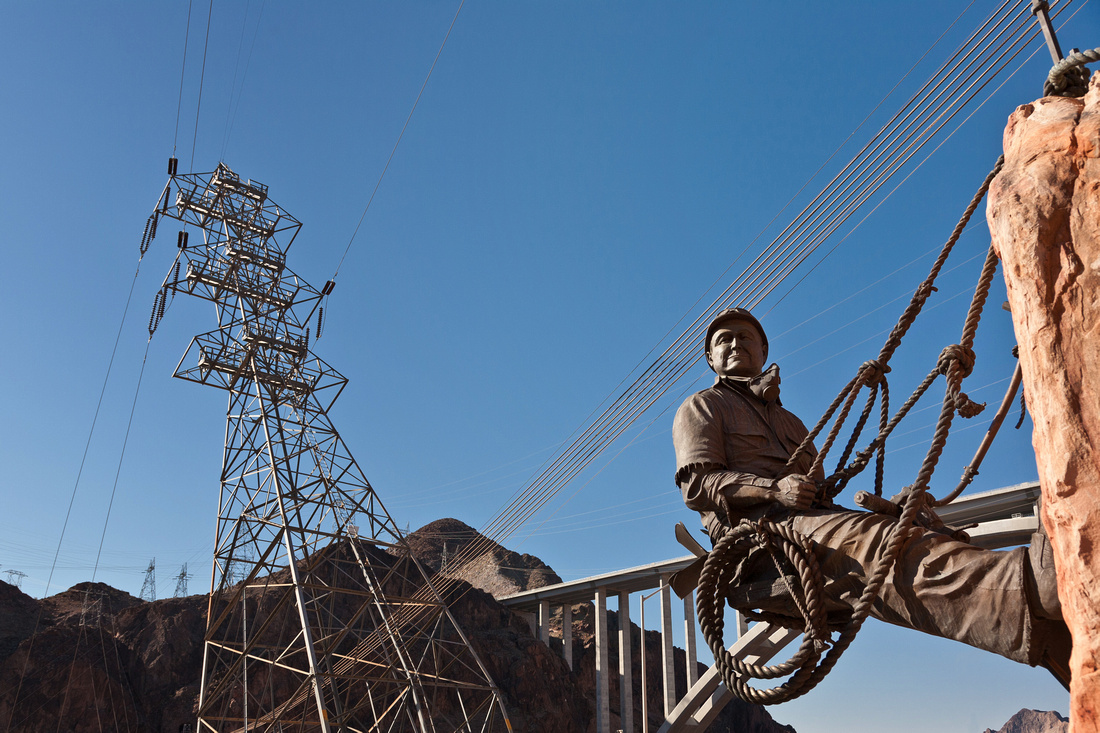 This past weekend, I accompanied my wife Karen to Las Vegas, the site of the annual International Council of Shopping Centers gabfest.  It was her first ICSC conference; I had been there a few times during my tenure at the City of West Covina several years ago (15, but who's counting?).  So while she was hobnobbing with brokers, mall developers, retailers, and other associated types, I decided to give myself a photographic assignment to put my free time to some productive use.

What I should have realized was that it was going to be hot during the day; not just hot, but DAMN HOT, like 105 degrees hot.  But never mind.  My first foray was to the world-famous Gold and Silver Pawn Shop, home of the hit television show "Pawn Stars".  Little did I know that they'd be filming that day for the show, so there I was, along with about a hundred other knuckleheads standing on the Las Vegas Blvd. sidewalk (beneath the blessed array of misters installed along the roofline) waiting an hour for an opportunity to get into the shop and then what, see Chumlee?  I did see the store's owner, Rick Harrison, who had just about enough taping for one day.  After ten minutes of posing for B-roll, he left, muttering, "I'm done."  My thoughts exactly.  I mean, what was I thinking?  So that was an hour of my life I'll never get back.  No photos either; they were prohibited during filming.

So, when it's that hot outside, what better place to try to stay cool, and maybe get some cool shots, than the interior of Hoover Dam?  This engineering wonder of the world, built for about $50 million between 1931 and 1935, fits like a cork on the bottle of Black Canyon, holding back a gazillion acre-feet of 53-degree Colorado River water.  There's no need for AC down there.  Okay, off I go.

So everyone who's ever been to Vegas has probably been to Hoover Dam.  Nothing new there, right?  And everyone who's ever been there has had a camera around his or her neck.  So what's my strategy for bringing back images that are at least marginally interesting?  Especially when I can't be there during the pre-dawn or post-sunset "golden hours" of magical desert light?  The answer in two words: Tonal Contrast.  Despite the really stark contrast of light and shadow in all of these images, whether caused by harsh direct sun, or interior lighting within the dam or power plant, the lit areas of the RAW files, straight out of the camera, are pretty flat.  Colors are muted, and detail is difficult to discern.  So right off the bat, in Lightroom, I jacked the contrast.  I pulled down the luminosity of the sky.  I added fill to the shadow areas to bring out some detail lost in there.  In the interior shots, I tried my best to render color temperature something close to what it looks like to the naked eye.  Then it's off to Photoshop.  No difficult processing there; noise reduction via Nik Dfine 2.0, and the magic of Nik's Tonal Contrast filter in Color Efex Pro 4, dialed individually to taste.  Every image in this post got a hit of Tonal Contrast except for the bronze sculpture of the High Scaler above.  Then sharpening via Nik Sharpener Pro, and I'm done.

My good friend Ralph Nordstrom, a fabulous fine art landscape photographer, would have been a lot more careful and selective with these images (if he'd have taken any of them at all), and undoubtedly would have produced a superior end product.  But my goal was to approach the top, but not go over the top, in terms of contrasty processing.  There are two HDR images here, each one a combination of three exposures over a six stop dynamic range.  The rest were finished as described above. 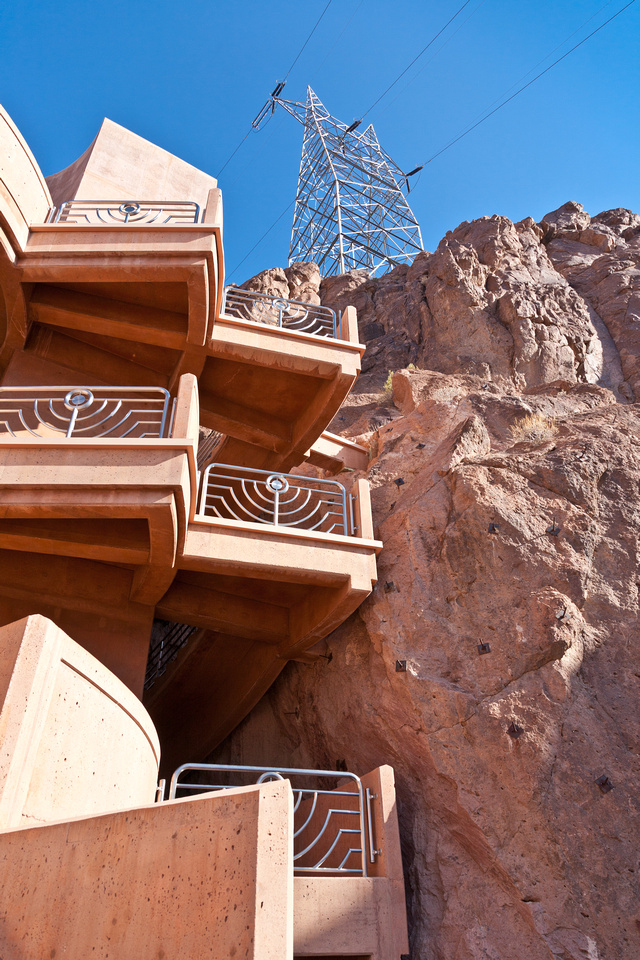 This is simply a corner of the multi-story parking structure built into the canyon wall on the Nevada side.  The architects of the new Visitors Center have done a great job integrating the Center into the site. The color palette reflects the canyon walls, while the generous use of art deco motifs continue the commitment to visitors that was designed into the construction of Hoover Dam back in the '30s. 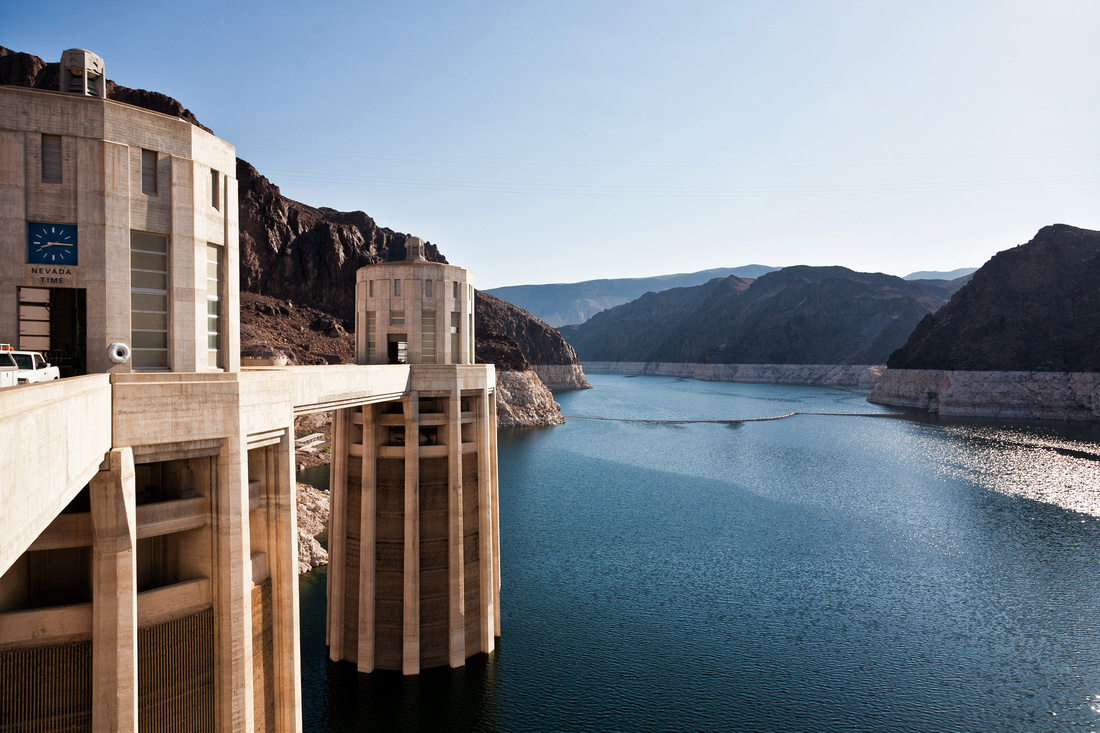 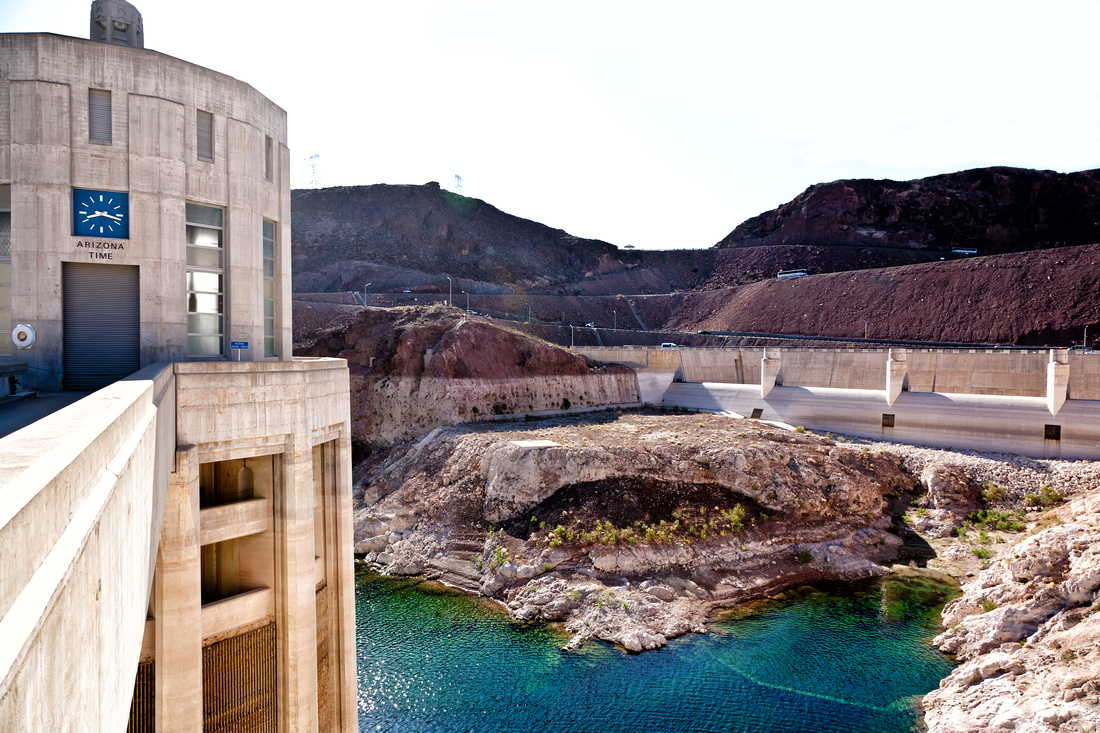 These two images of the intake towers, especially the second one (one of the Arizona towers), show how low the current water level of Lake Mead is, about 100 feet below the high water mark.  You can see the "bathtub ring" in both images, as well as the Arizona spillway that would divert overflow water during peak times.  In recent years, the water level in Lake Mead has actually been rising, but apparently not this year, which was particularly dry in the Colorado River Basin. 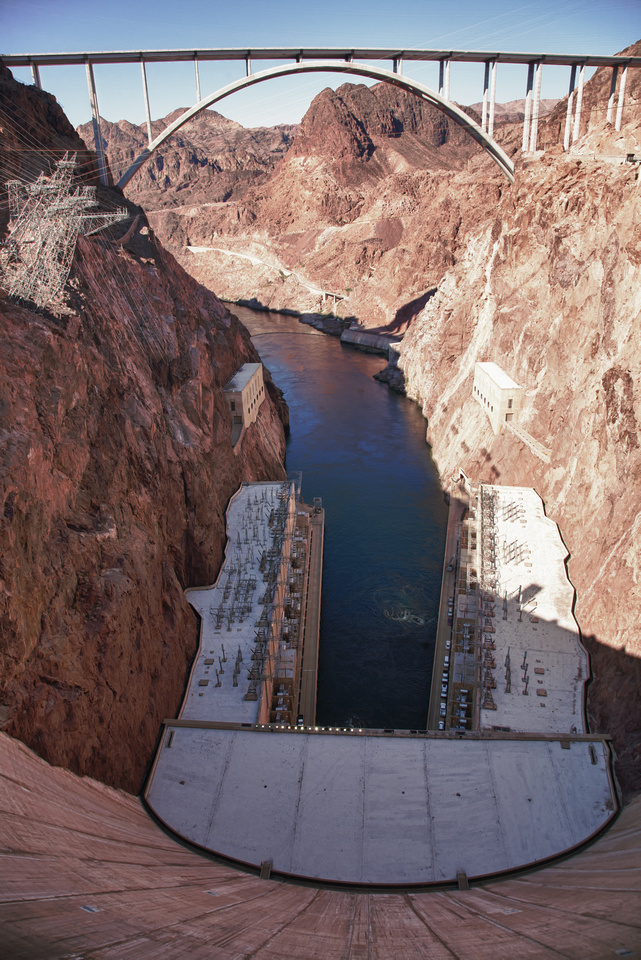 Before going into the Visitors Center for the dam tour, I walked along the top of the dam to get a few images of the dam face, the power plant below, and the Mike O'Callaghan - Pat Tillman Memorial Bridge in the background.  This bridge, completed in 2010 at a cost of $240 million (nearly five times the cost of Hoover Dam), serves as a bypass for US 93, which used to gridlock when traffic was forced to cross over the top of the dam.  That route was picturesque, but often painfully slow. This is one of two HDR images in this gallery. 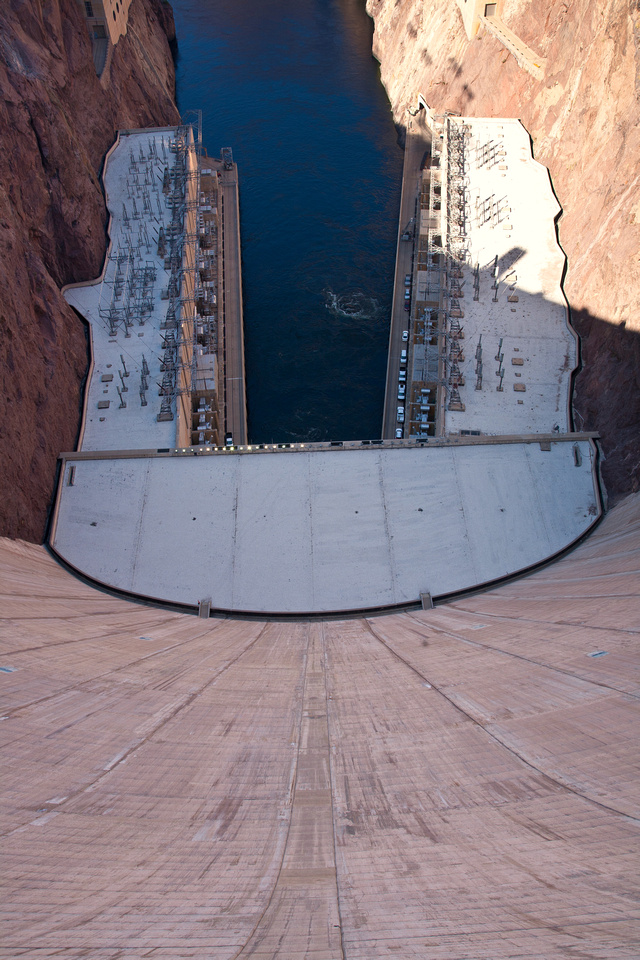 Not the place to drop your lens cap.... 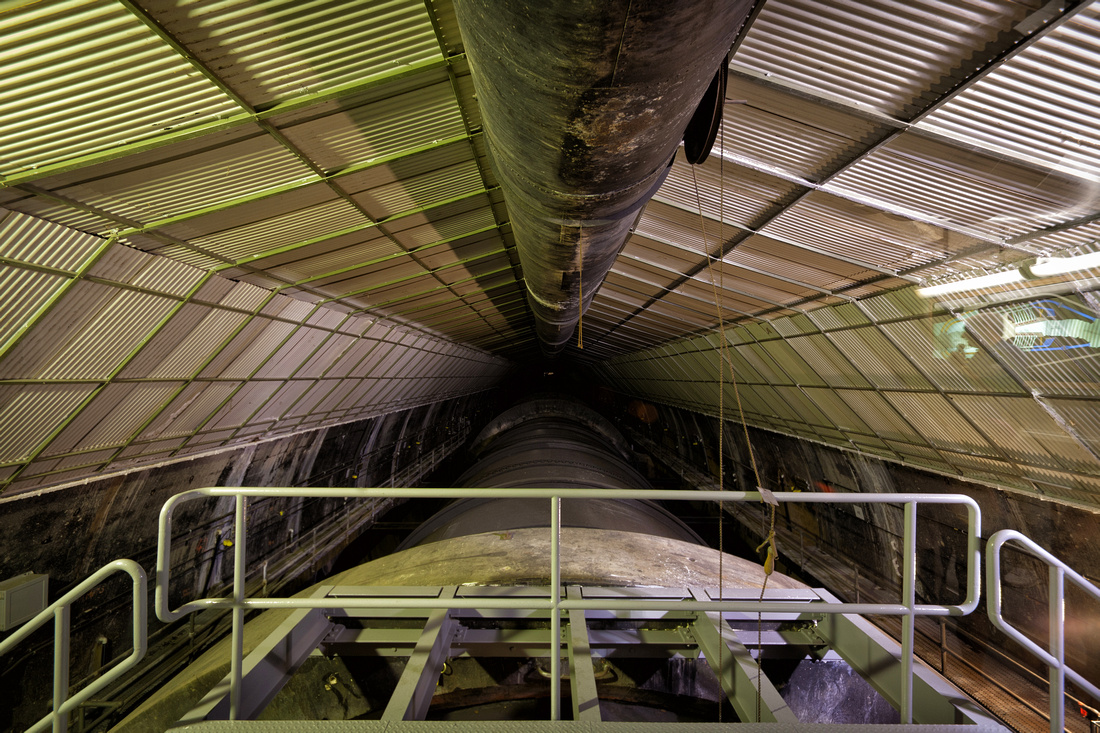 The exterior images were captured with my Canon 24-105 mm f/4.0 glass.  Once inside, I switched to my Sigma 12-24 wide angle optic.  The first stop on the dam tour is this view of one of the 40-foot tunnels containing a 30-foot penstock (a fancy word for a big-ass pipe) carrying water from the Nevada intake tower to one of the massive turbines of the power plant below.  This shot is from a viewing window; on the right is a reflection of our tour guide.  This was mixed lighting at its worst, a combination of fluorescent and tungsten yuck.  There's no way to render this exactly as my eye saw it, so this is somewhat a "forensic" shot.  You can see what it is, but that's about it.  Impressive engineering, yes; artistic, not so much. 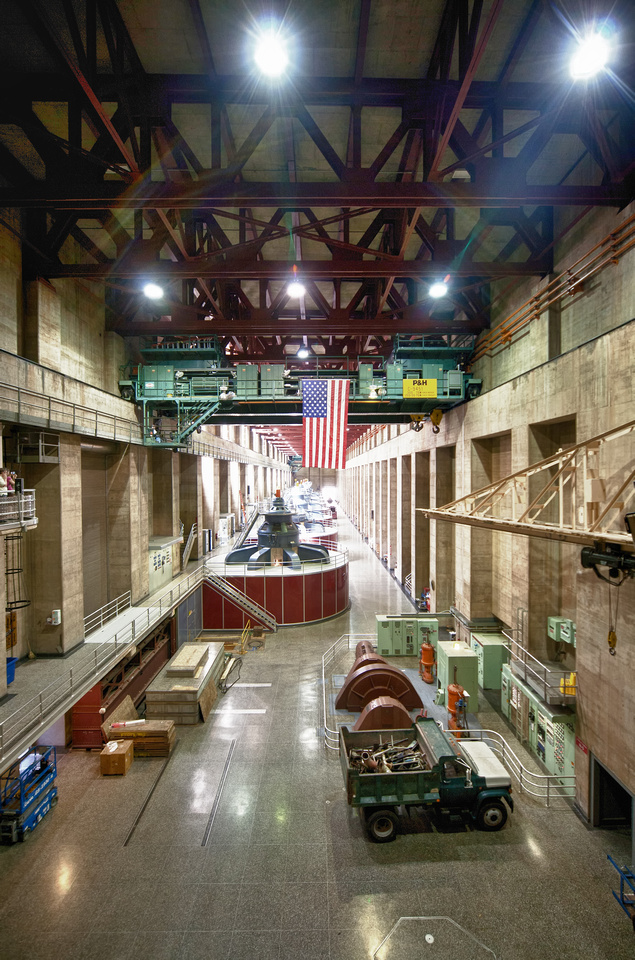 Here's the power plant on the Nevada side.  This is the second HDR image in this gallery. Does it work, or is it another forensic shot?  The verdict: forensic.  But the full range of detail is there, such as it is. 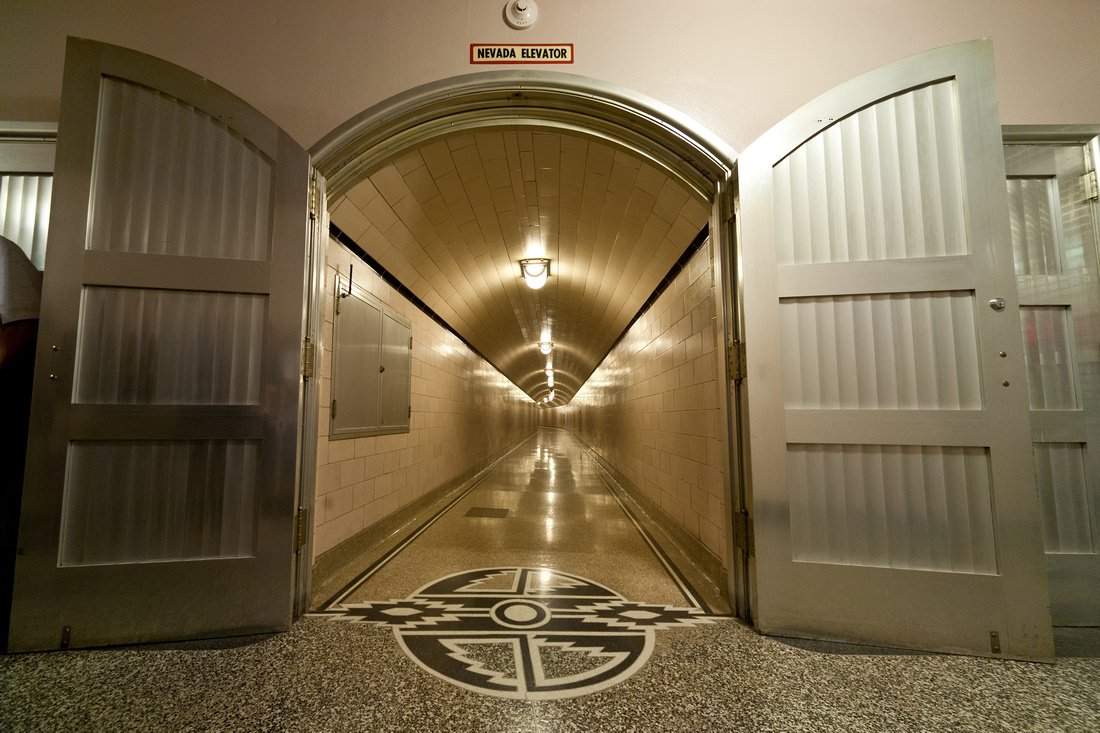 This is an interior view of the corridor leading into the dam itself.  As mentioned above, the engineers and designers of the dam knew that visitors would be coming to Hoover Dam for years to come, so the visitors' experience was designed into the structure of the dam itself.  Corridors were paved with terrazzo, and the decorative floor treatments were designed to reflect southwest motifs. Metalwork, including doors, light fixtures, and other trim, was cast from aluminum in the prevailing art deco style.  This shot, at 12 mm, shows the distortion typical of ultra-wide lenses.  I didn't have a tripod or the time to frame this shot as accurately as I would have liked, so there's some angular distortion that couldn't be avoided.  All of these interior frames were handheld at about 1/8 second at ISO 1600.  I used whatever I could to steady and brace myself for these long exposures. Here, I'm sitting on the floor, using my knees as a makeshift tripod. 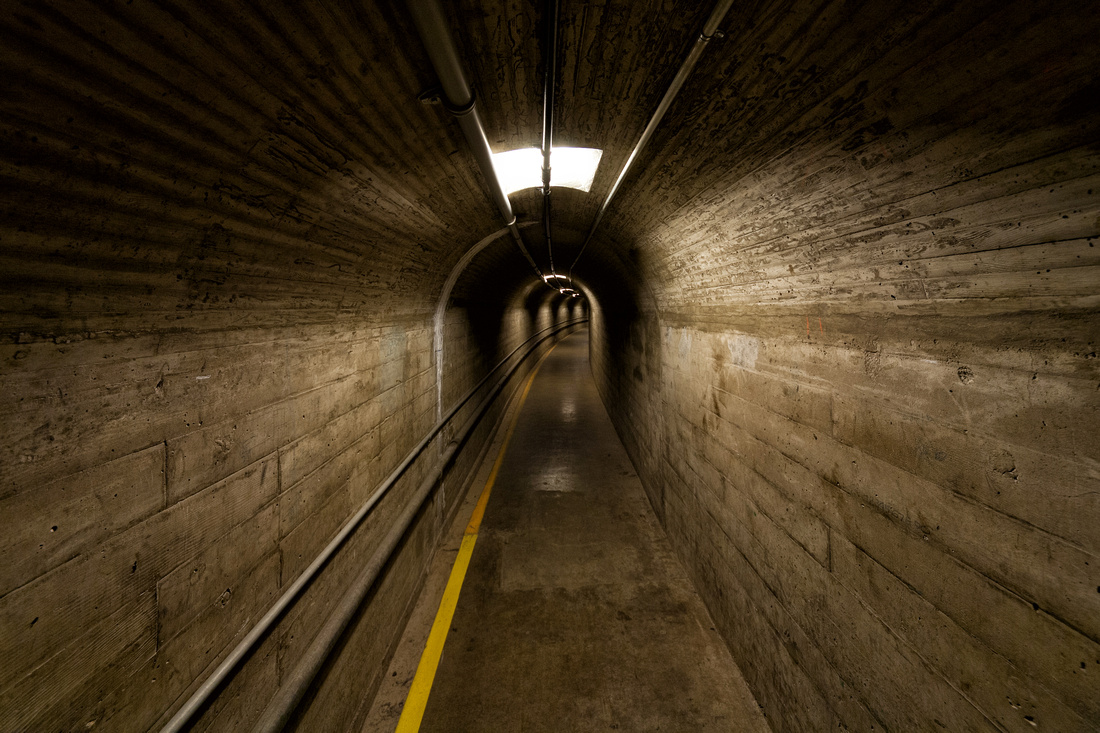 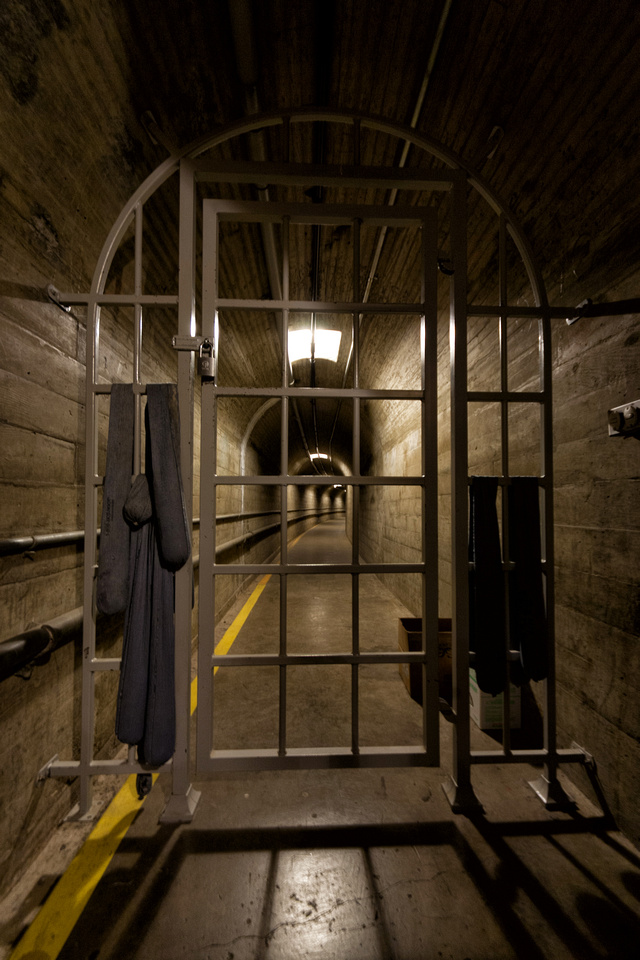 The next part of the tour takes you into a couple of the interior corridors of the dam.  There are two miles of these corridors winding their way through the dam.  Built for inspection purposes, they provide interesting compositional opportunities for photography.  Then you learn how inspections were and continue to be done, and you realize just how amazing this structure really is.  At this gate, the tour makes a right turn into a low-ceiling tunnel leading to a window on the dam face itself. 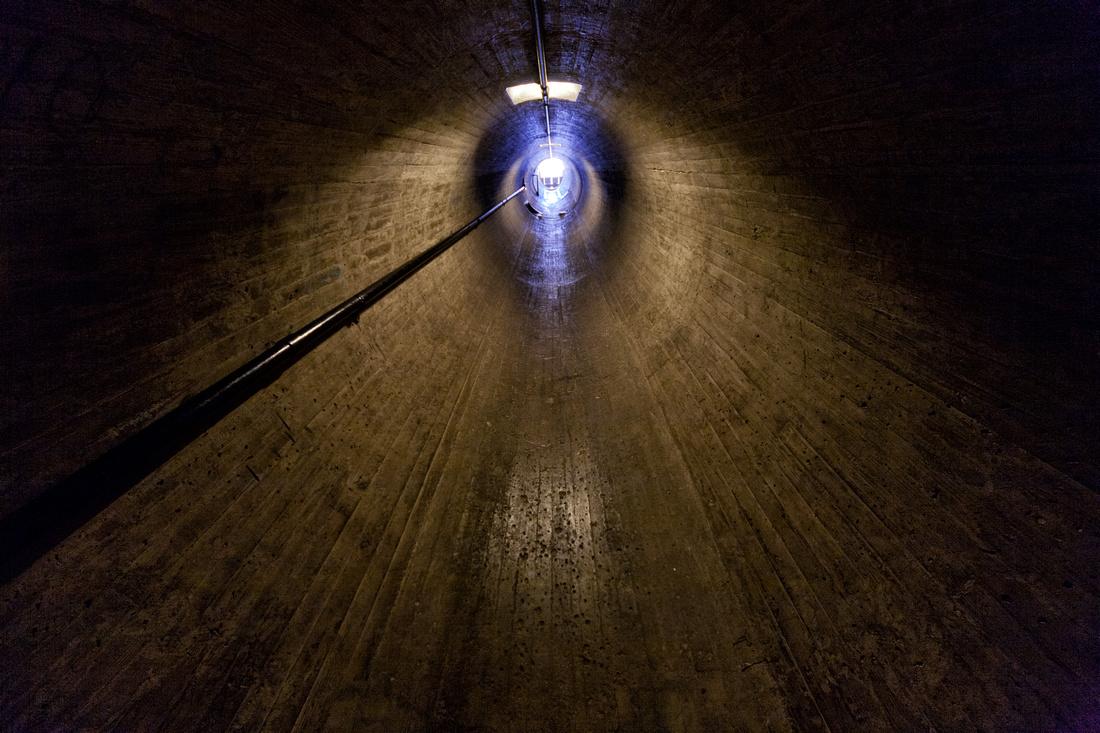 This view of the tunnel reveals the conversion of tungsten lighting in the ceiling to daylight, something the human eye does automatically.  The digital camera needs blue to convert the warm tungsten flavor of the ceiling light, so the exterior sunlight at the far end of the tunnel picks up the same blue conversion. 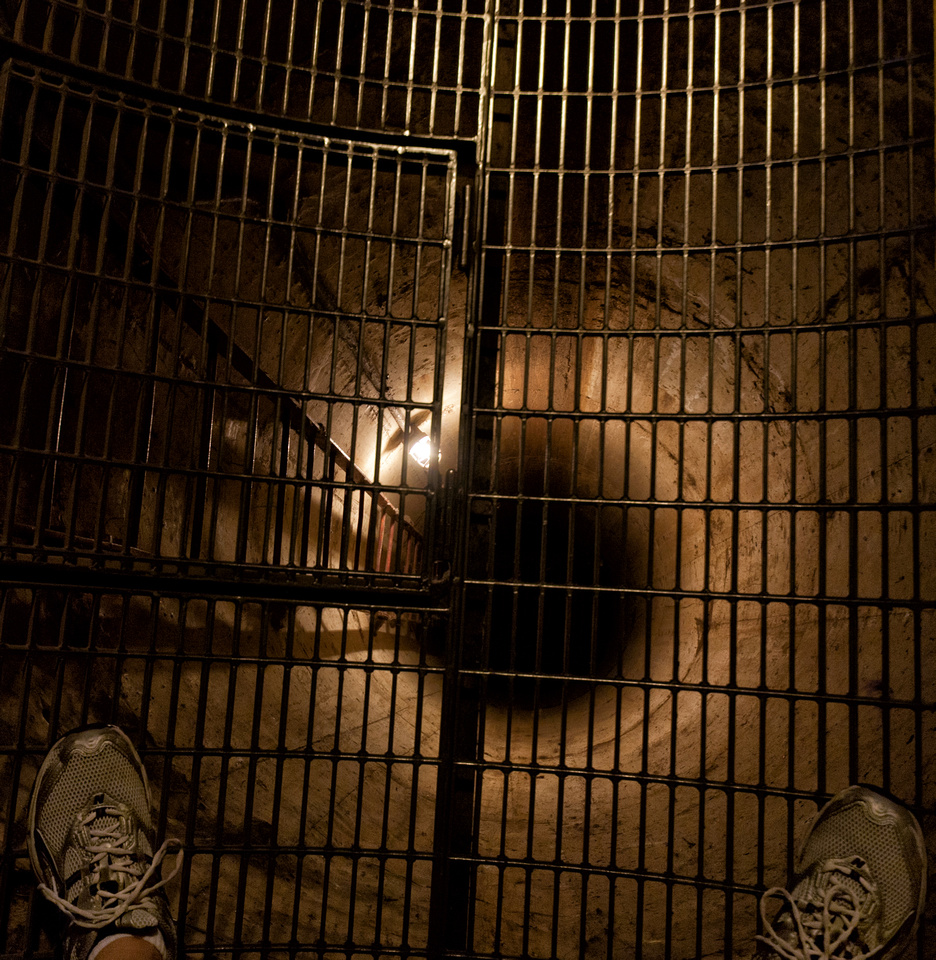 Midway down the tunnel you come to a vertical shaft that reaches down to the bottom of the dam.  There are a few lights down there, but most have burned out, leaving this one.  You cannot cross this shaft without walking on the steel grate.  If you're skittish about heights, this is kind of a gut-check.  But the end of the tunnel leads to this view of the Colorado, Black Canyon, and the Bridge.  This view is from about one-third of the way up from the bottom of the dam to the top. 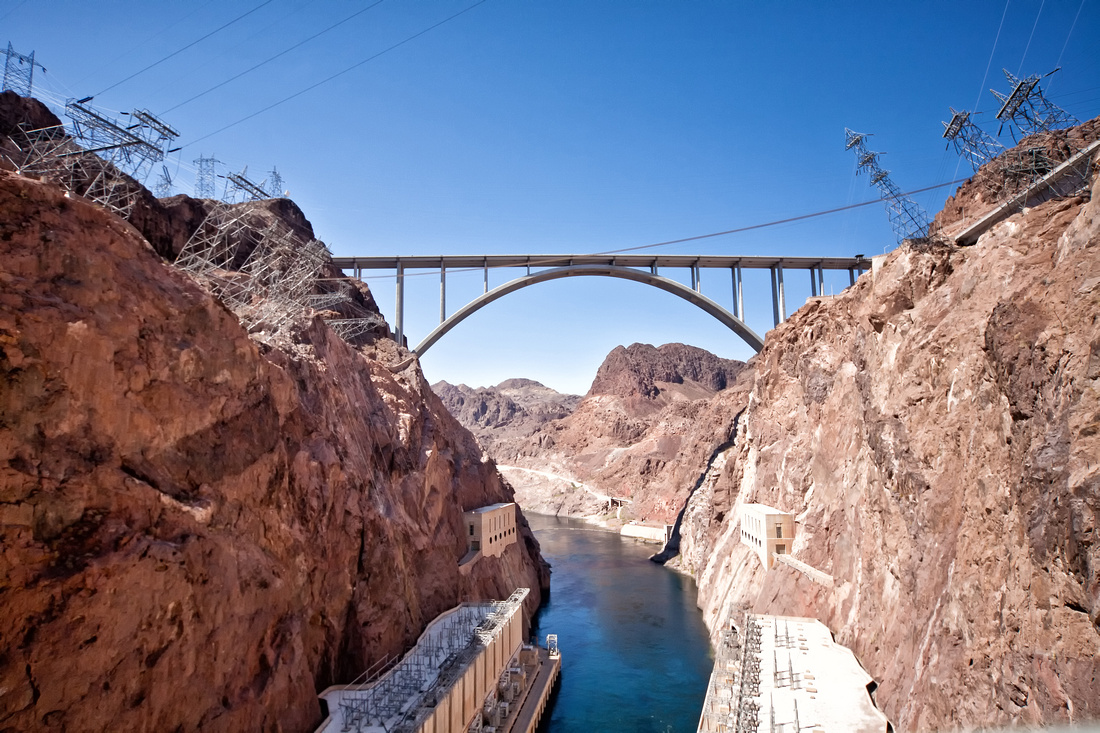 Back into the corridors, the tour takes you to a very long, steep descent, or if things get too shaky, a steep ascent to the top. This view is actually looking downward at about a 60 degree slope. 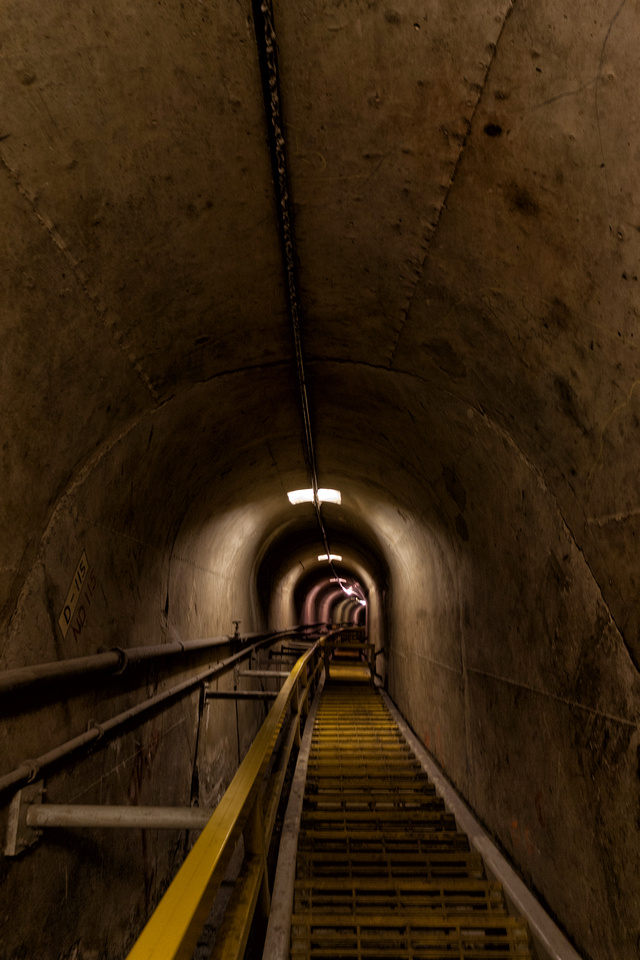 Speaking of "shaky", Hoover Dam is built to withstand an 8.3 magnitude earthquake, but it is also said to be 70% overbuilt above that standard.  A seismograph sits just a few feet away from this escape shaft.  Hopefully, the access door at the top isn't locked from the outside! 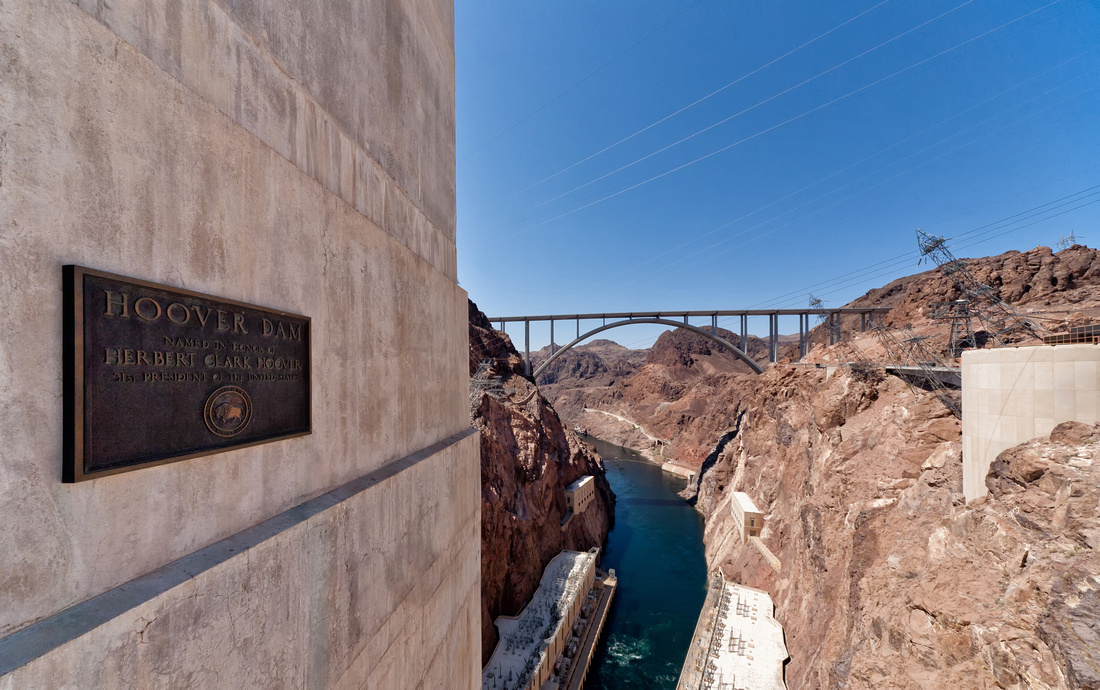 Back on top.  Still at 12mm, but angular distortion is minimized due to placement of critical elements in the center of the frame, except for the Hoover Dam plaque, where I wanted a bit of angular distortion.  But back to the dam face, from the corner of the dam on the Nevada side, and you get this: 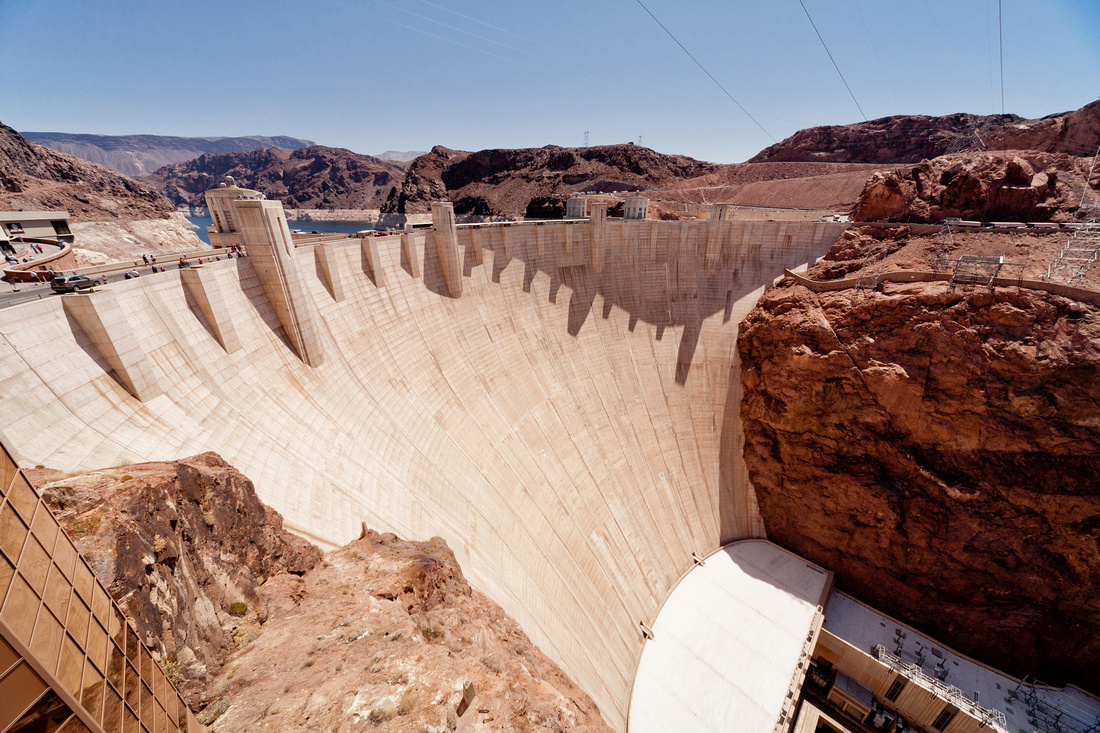 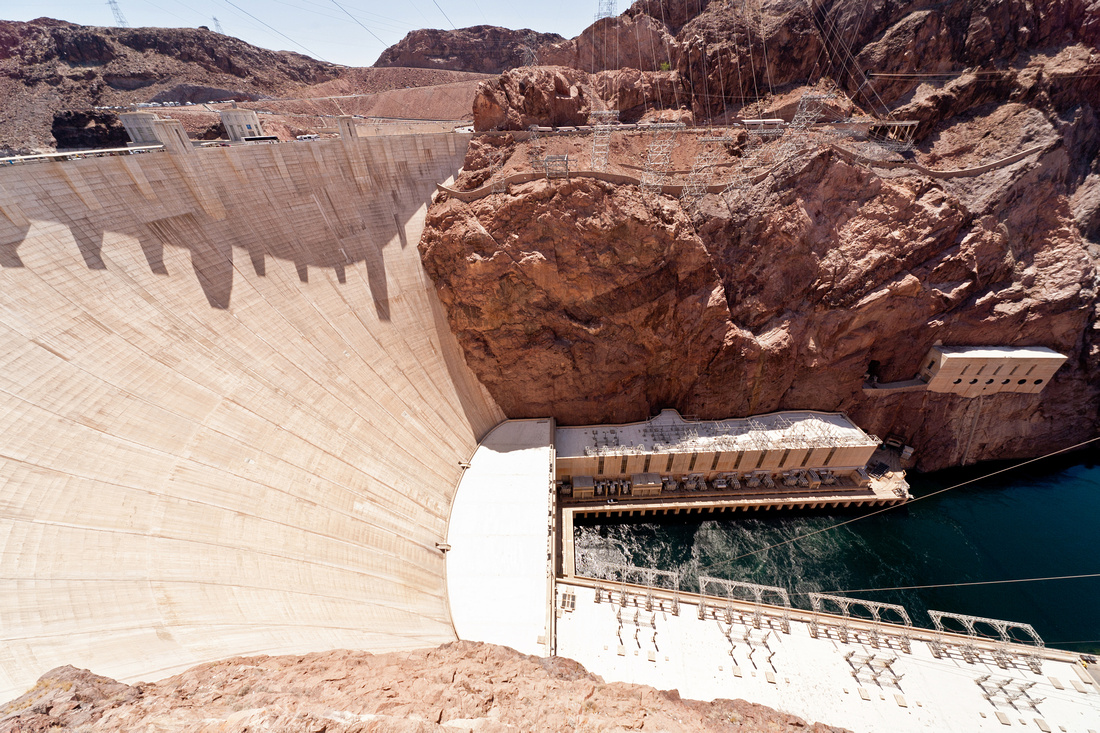 Plenty of angular distortion here, but I still like these frames. 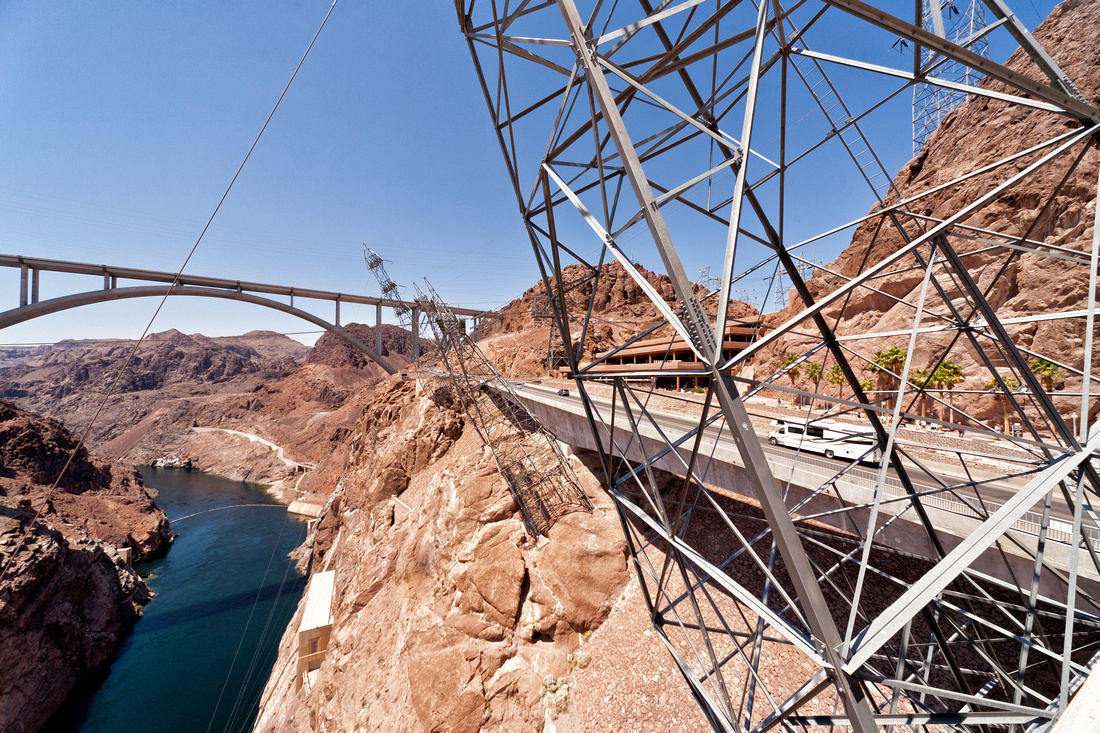 After leaving Hoover Dam and the Visitors Center, I took a walk up to the O'Callaghan-Tillman Bridge (the bridge is named after a former governor of Nevada and Pat Tillman, the NFL player-turned Army Ranger killed in Afghanistan by friendly fire).  This bridge rises 840 feet above the Colorado River, 1500 feet downstream from the dam.  It is the widest concrete arch in the Western Hemisphere.  Here are some views from the bridge back to Hoover Dam. 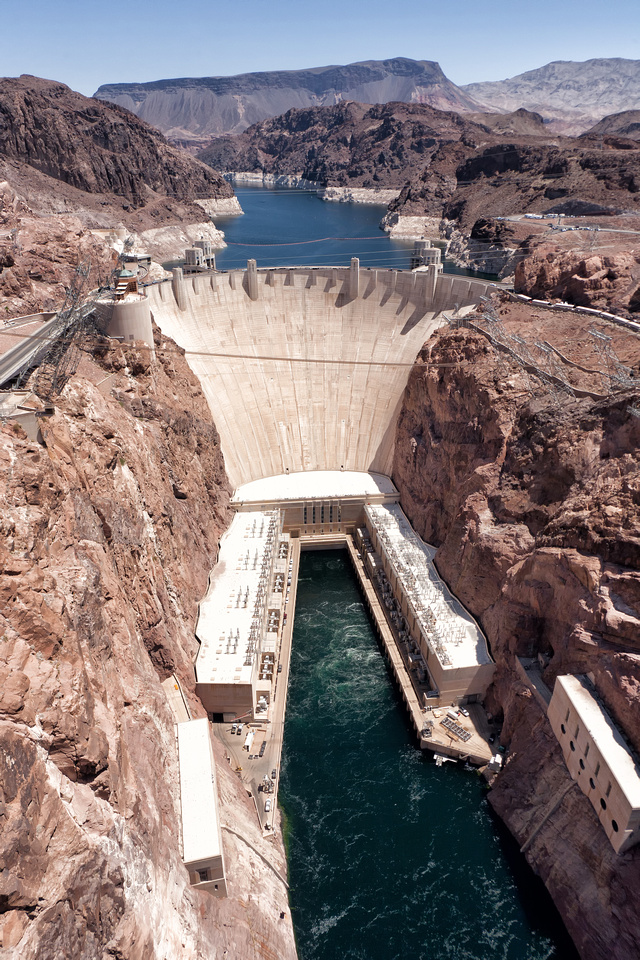 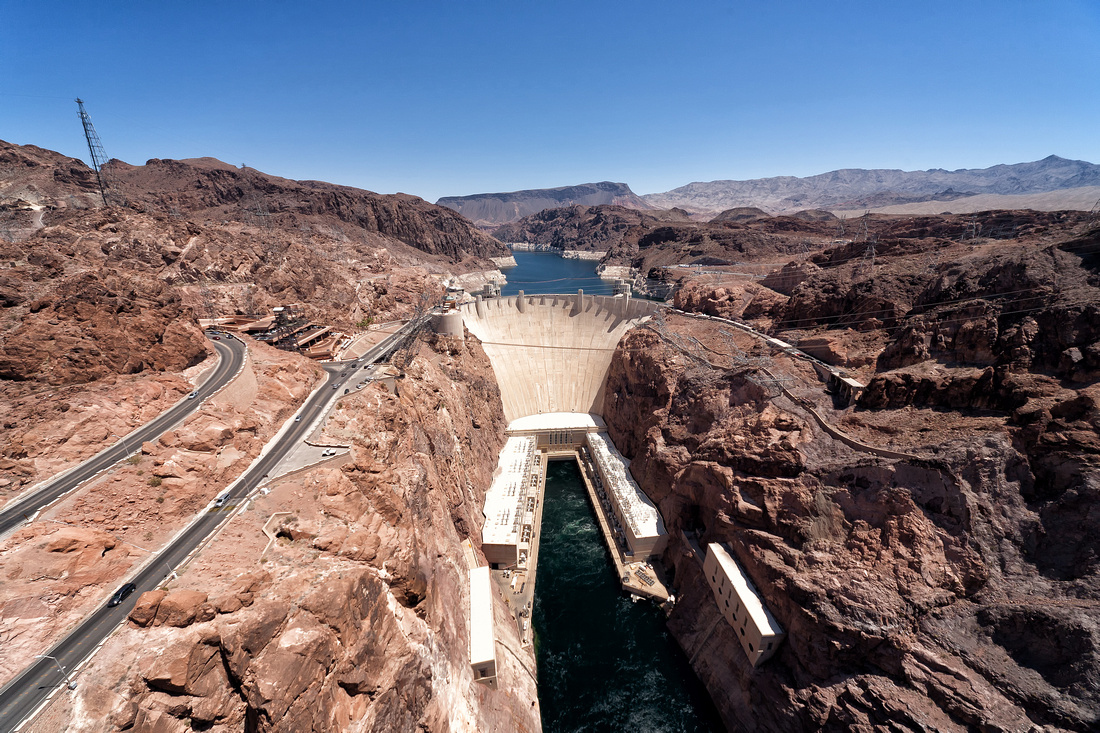 All in all, a fun way to spend part of a day in the desert.