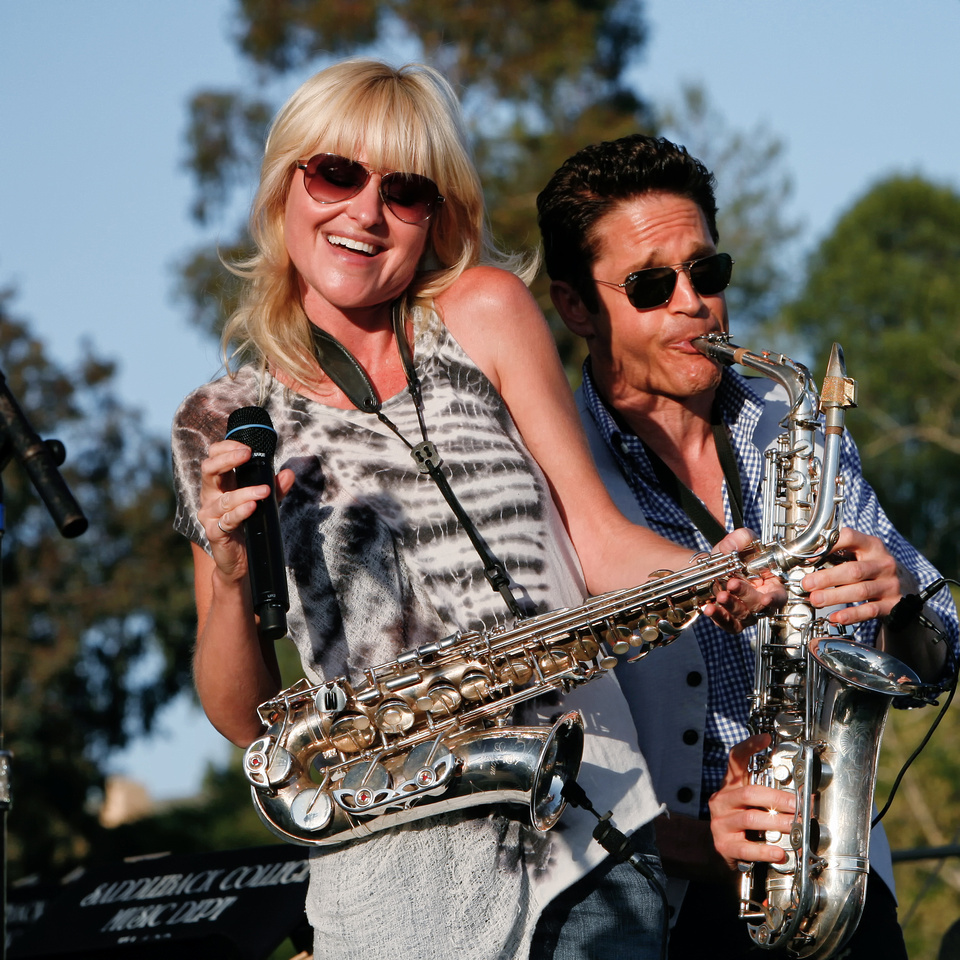 This past weekend I had the privilege of photographing the annual KSBR Birthday Bash held each year at Oso Viejo Park in Mission Viejo.  The Bash is KSBR's primary fundraising event each year, a celebration of smooth jazz in a tremendous setting.  KSBR is the public radio station of Saddleback College, and is staffed by a dedicated and fun bunch of folks.  I've been fortunate to get to know these people, and in turn, to gain access to several of the station's productions.  The Bash is the capstone of the musical year, at least for me.

There's not much to share in terms of photographic technique in these images, but I want to share what, to me, are some of the best, and why I've chosen them.  First and foremost is the photo above, with Mindi Abair and Dave Koz in a sax duet covering "Just the Two of Us".  It was a magical moment and I was in the right place at the right time to the left of the stage to capture Mindi's joy and Dave's kinda devilish expression.  Right after the set, I showed Mindi and Dave this photo, which is now featured on both of their Facebook fan pages, as well as KSBR's event page, with about 800 "likes" altogether.  A couple of days ago, I brought a disc of photos to the station, and ran into David Hopley, a brilliant, generous, and understated photographer who knows just about everyone in the jazz community.  He brought in his own disc to the station, along with two absolutely amazing 16x20 prints he made, including a crazy good shot from a different vantage point about five seconds before or after my shot above.

Sometimes you can get cool images away from the performance stage.  Before the show started, KSBR DJ's Bob Goodman and Kevin Melvin were broadcasting from a tent in the park.  A shot of both in the frame didn't quite work for me, but individual portraits of these two guys doing their thing worked very well.  This is Kevin: 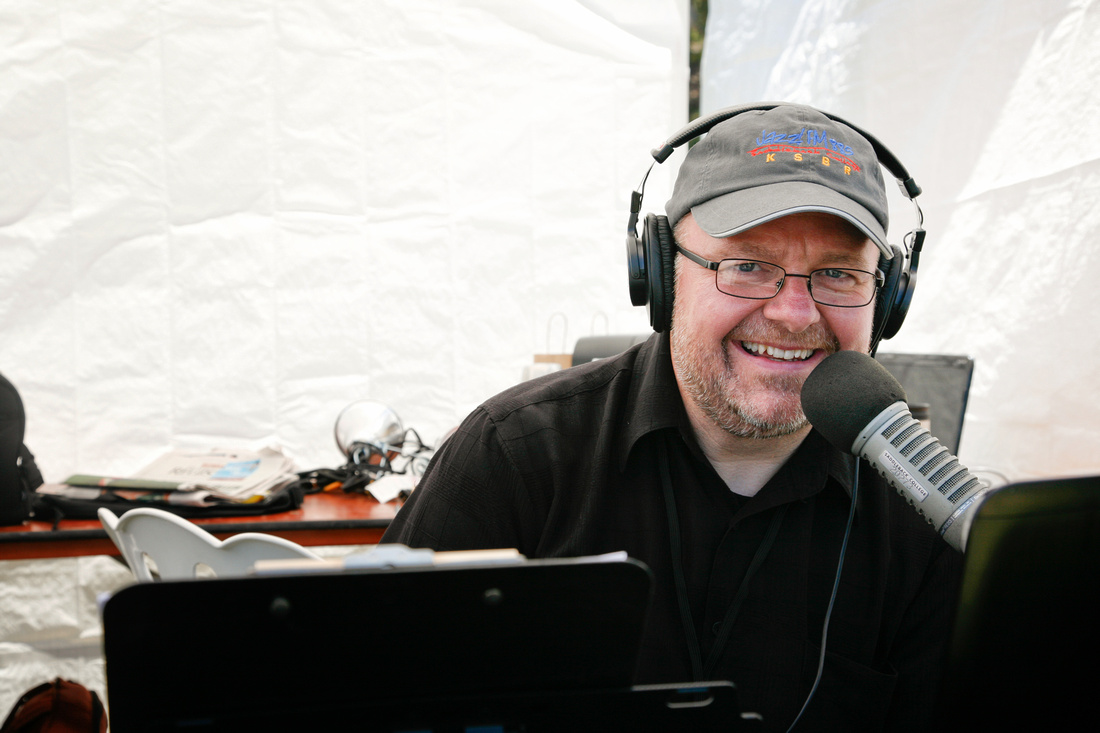 It's also good to get some crowd shots, or to isolate some folks enjoying the moment, like this couple: 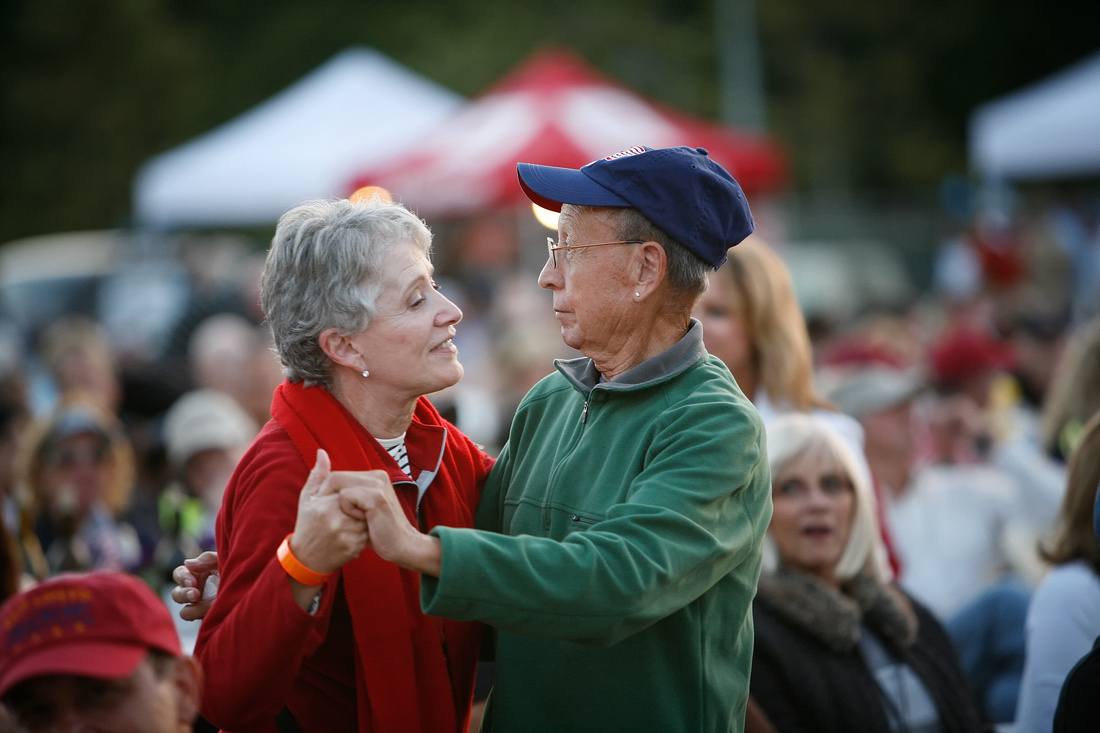 Of course, one of the standard goals for music performance photographers is to capture energy and movement in the performance.  Rock concerts are obviously target-rich environments, but a jazz concert can also deliver high energy as these two consecutive frames from the Mindi Abair - Dave Koz set reveal: 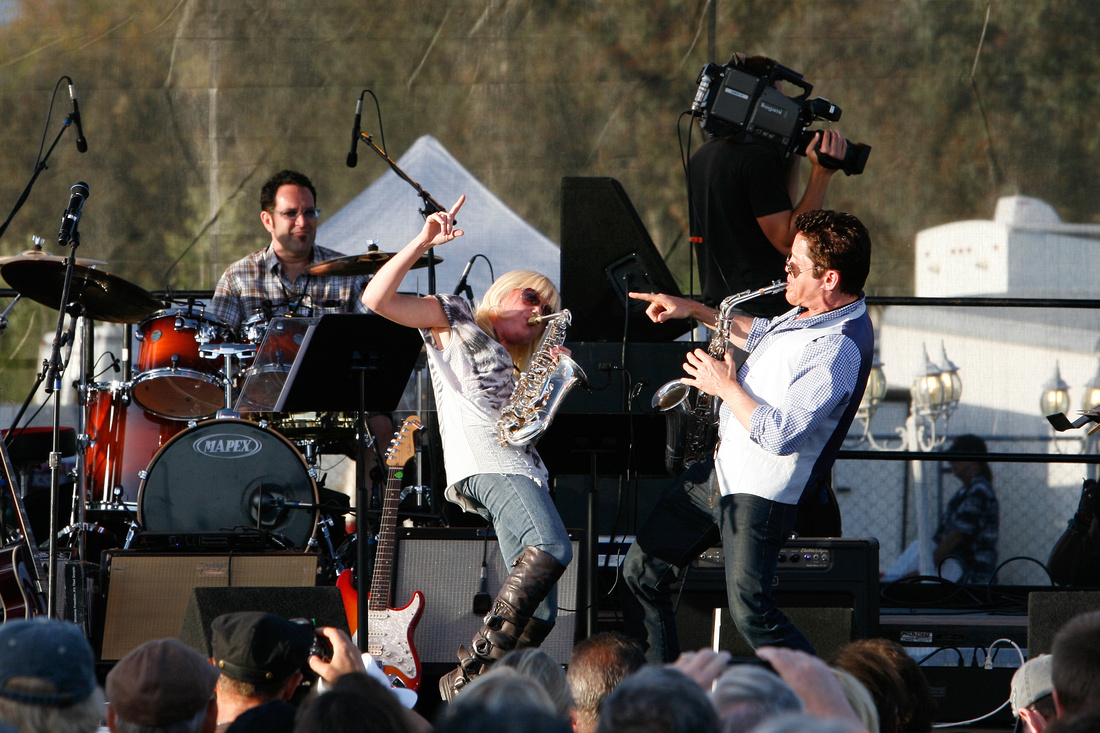 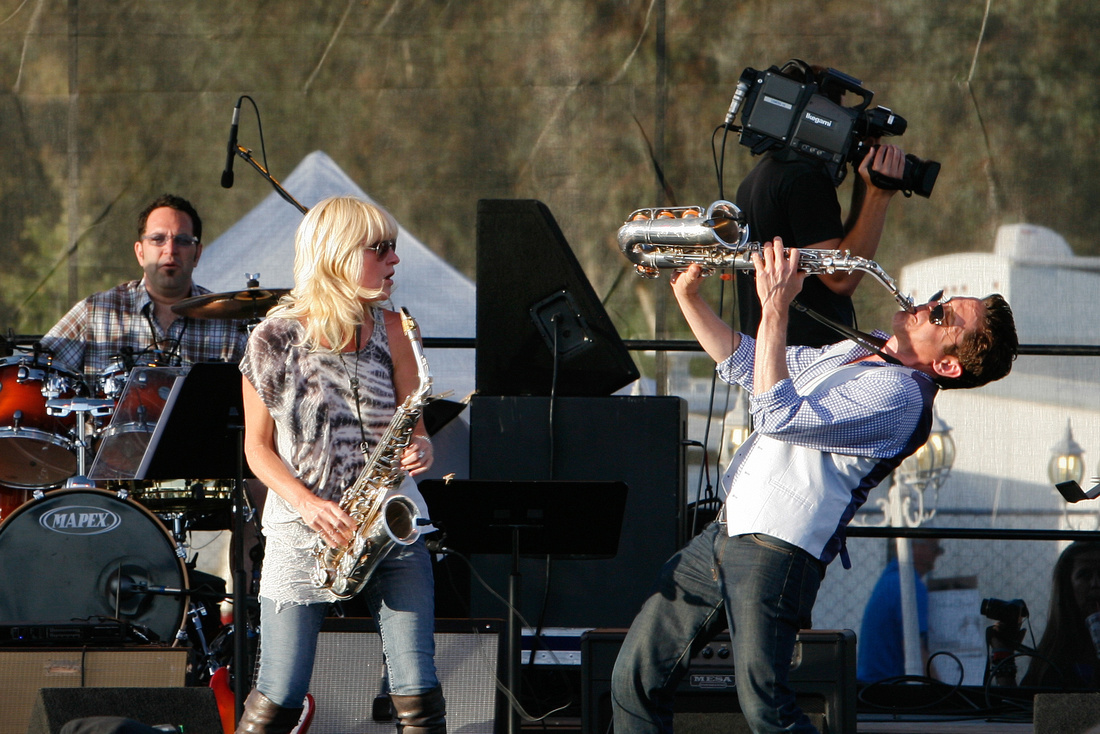 And, if you hurry, you can get it from three different angles, this one from the right side: 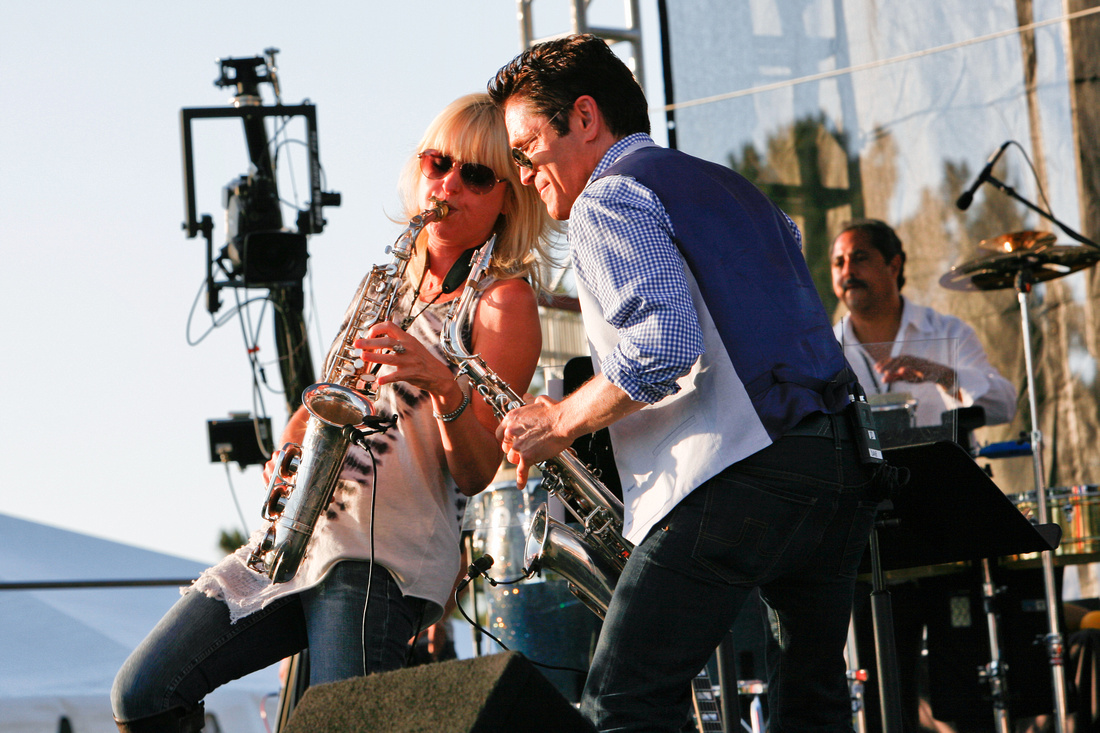 Most of my images were captured up close; sometimes almost too close.  This is Vincent Ingala. 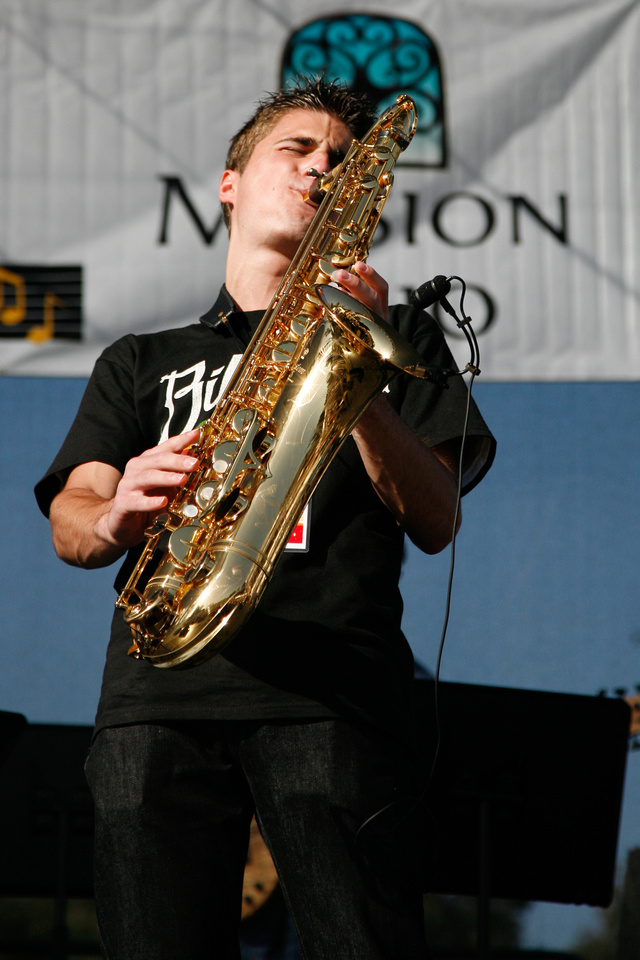 Once again, Mindi Abair, comin' right at ya: 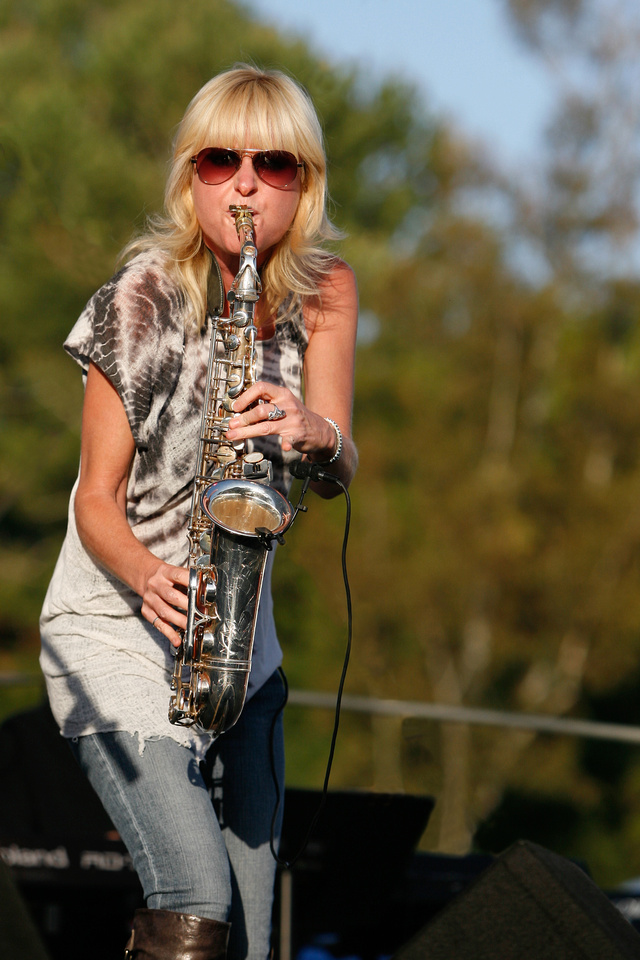 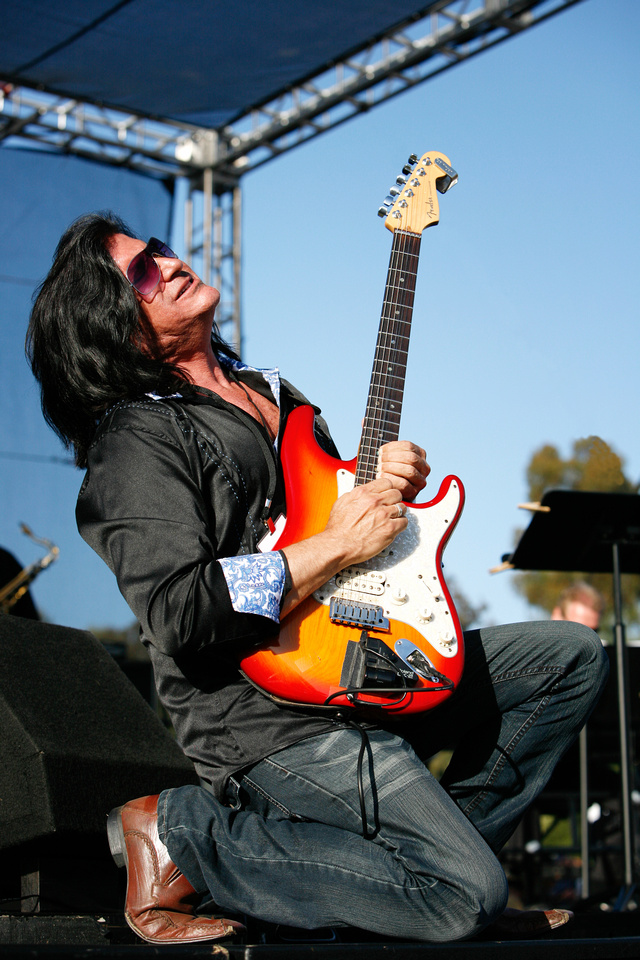 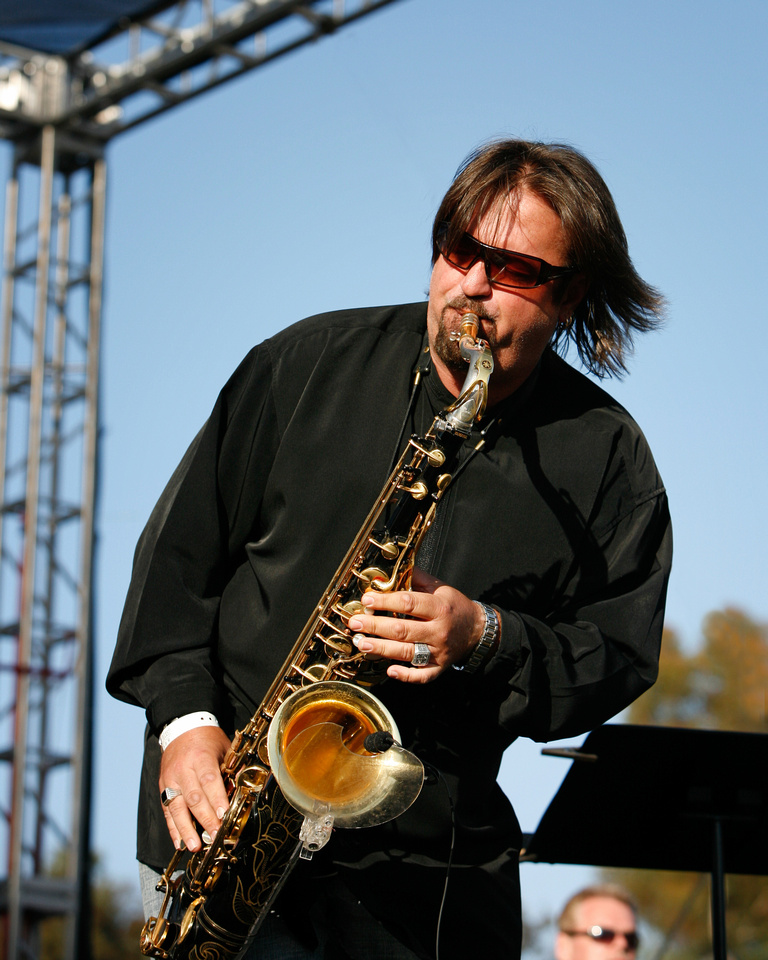 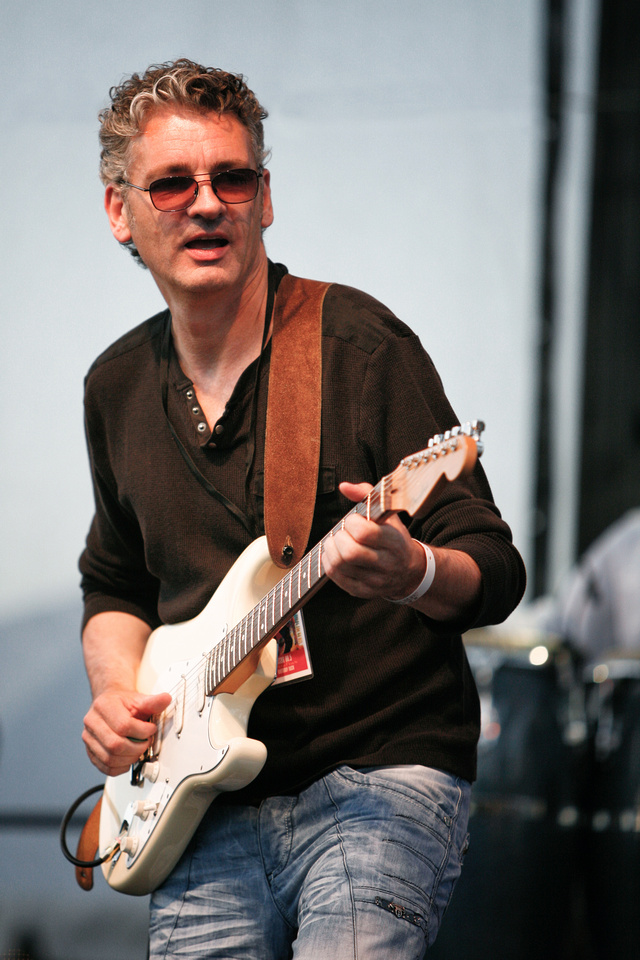 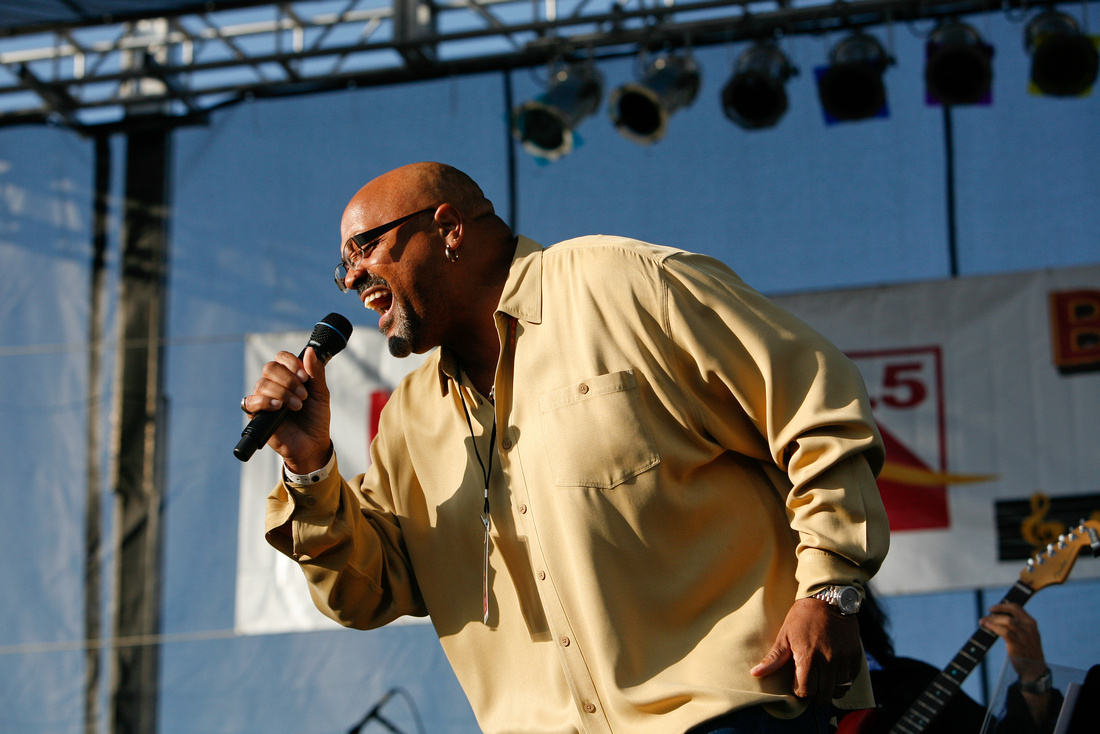 I don't usually go for the "up the nostrils" shot, but this one of Derek Bordeaux works for me.  Derek's a joyful man, and this shot captures him perfectly: 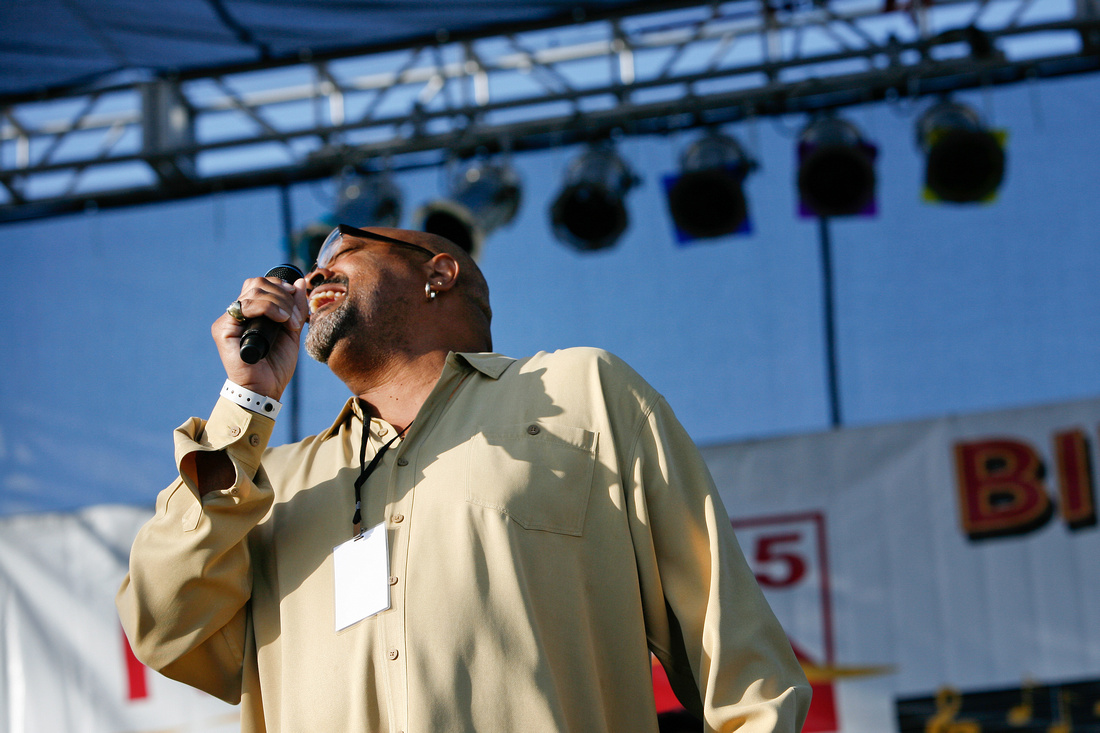 When night falls, and the light gets interesting, you can go for a different feel.  I like to isolate performers and go for mood and expression.  This is one of my favorite artists, who also acts as the Bash's emcee, flugelhorn virtuoso Tony Guerrero (this time with the trumpet): 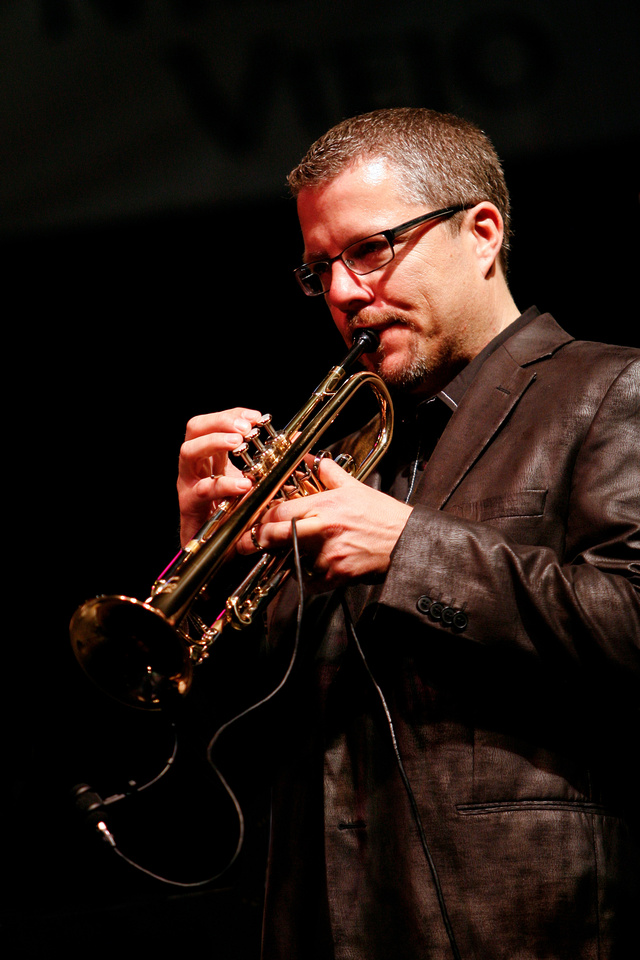 A perennial favorite is trumpet legend Greg Adams (this time with the flugelhorn).  Rather than leave him floating in black space, I decided to support the base of the photo and provide some depth by including these out of focus lights in the frame: 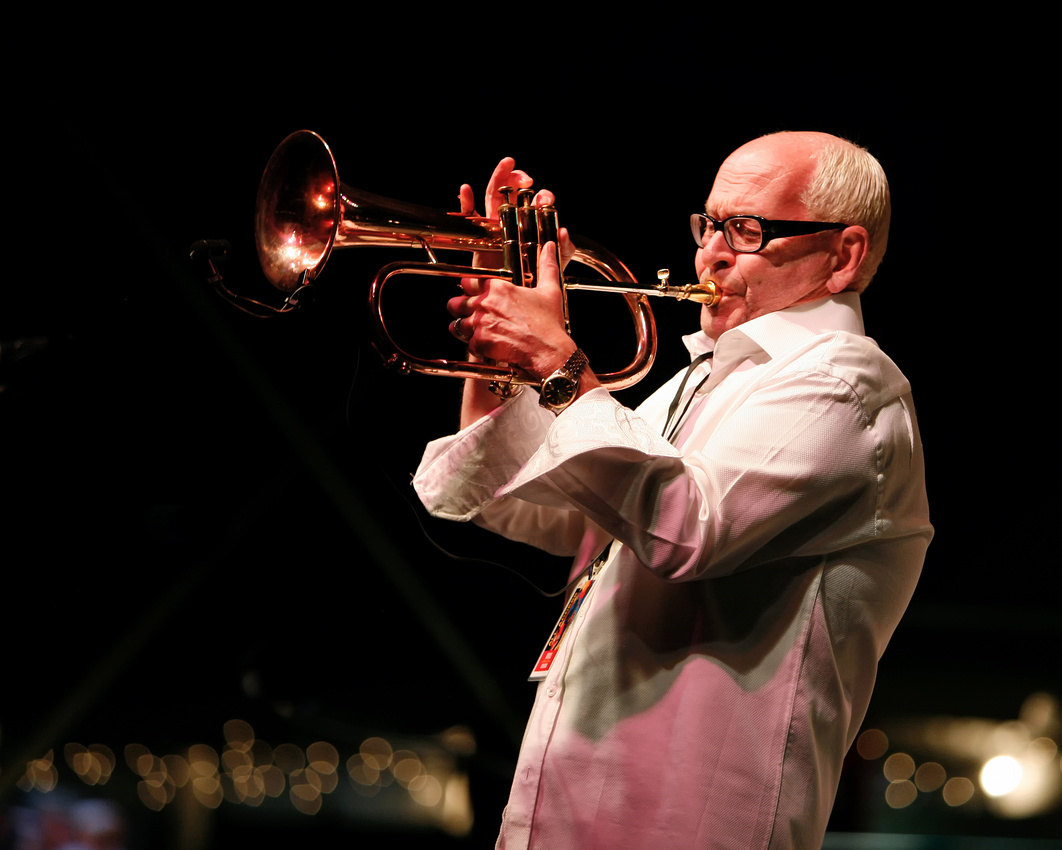 One of the delights of the Bash this year was the appearance of Tom Schuman, keyboardist with Spyrogyra.  Here are three consecutive frames, each with its own expression and mood.  Which one do you like best?  For me, for some reason, it's the last one. 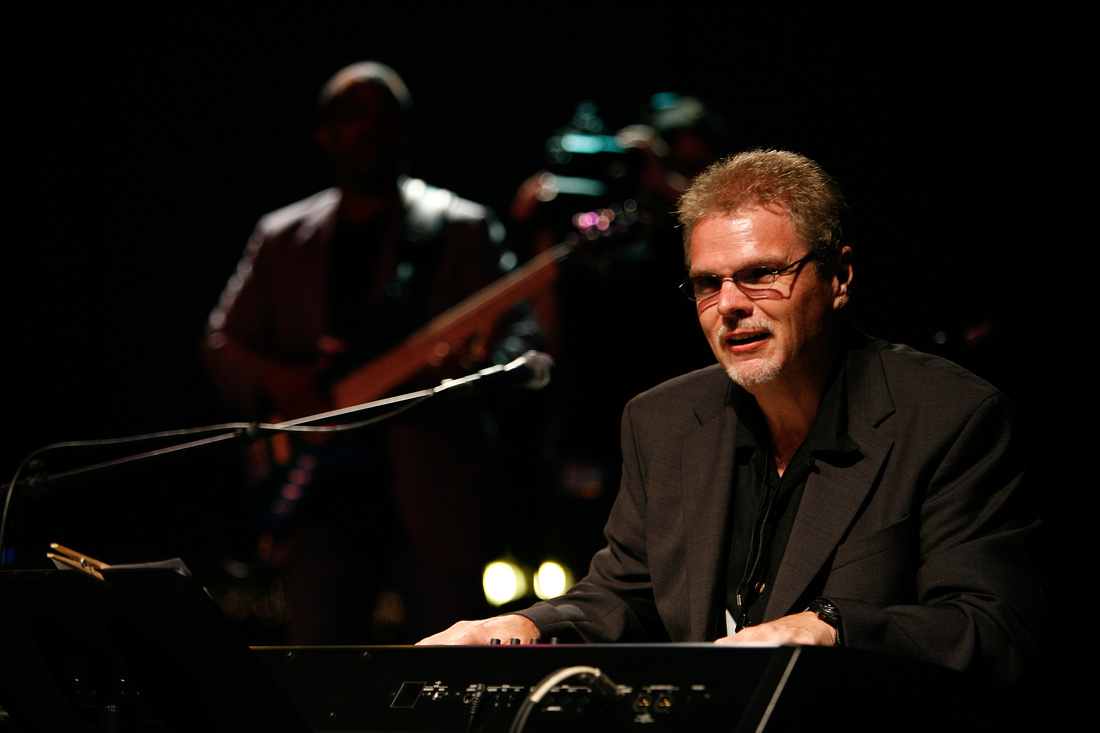 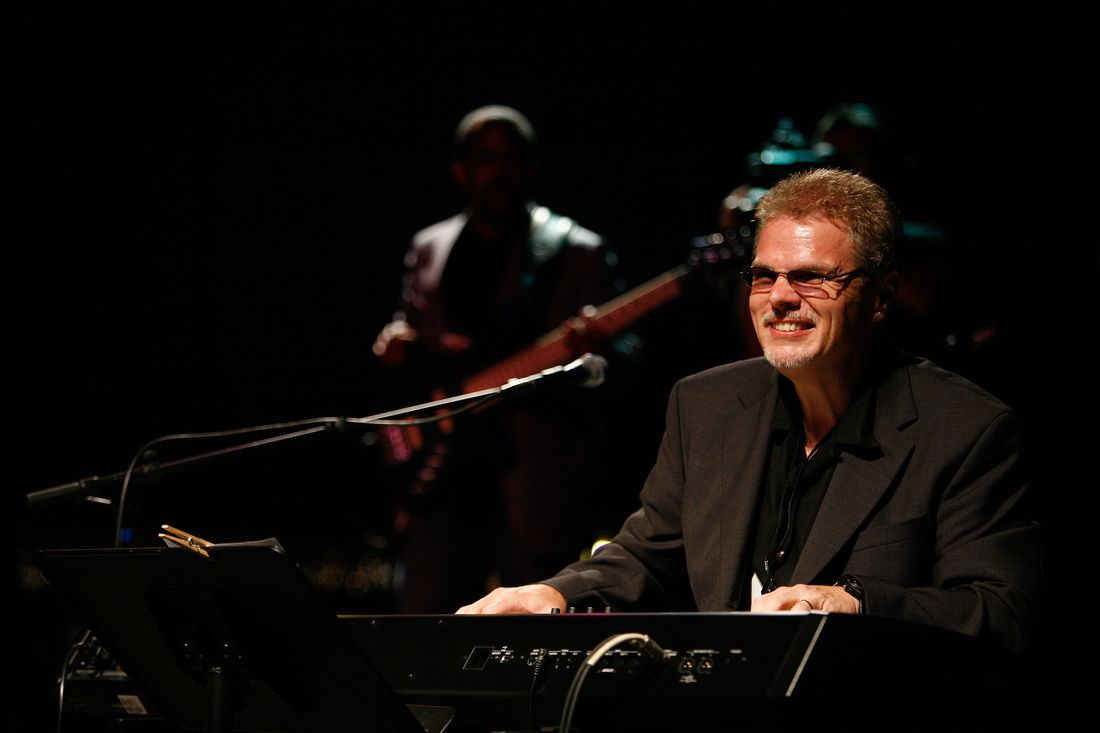 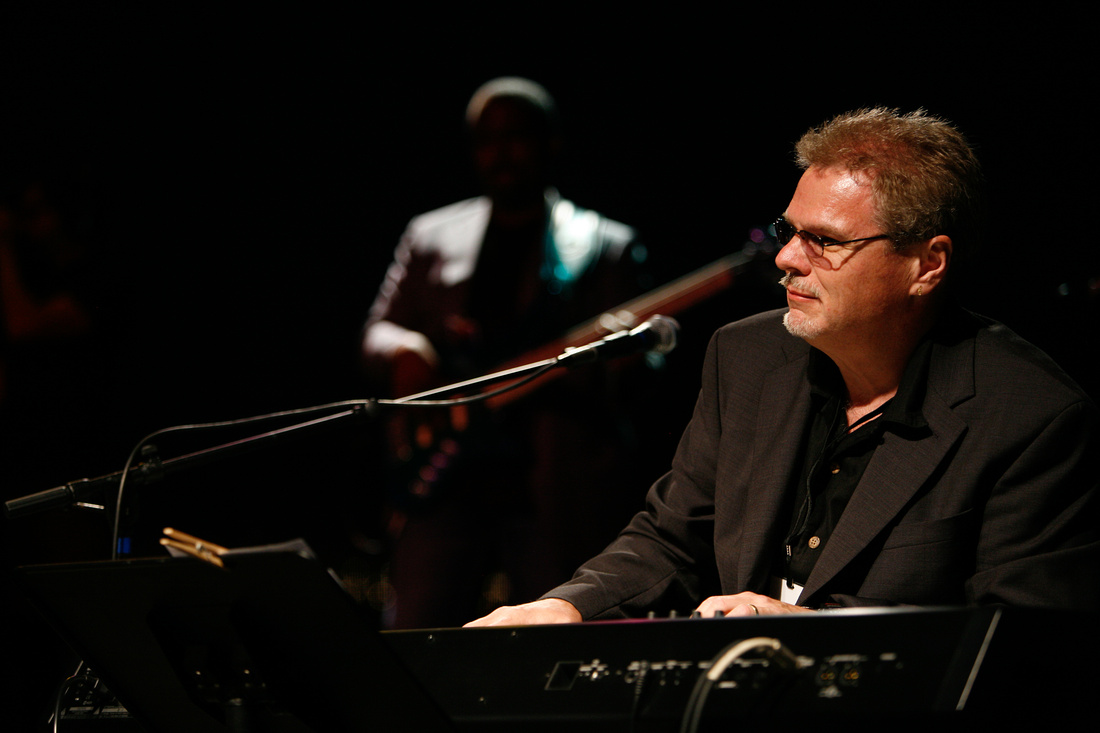 The Bash ends with a big jam with everyone joining in.  Unfortunately, this year, the frontal lighting of the stage wasn't bright enough to illuminate the entire field evenly, but from my position, I framed up the farewell wave from featured vocalists Darryl Walker and Derek Bordeaux, with final "thanks" from Tony Guerrero. 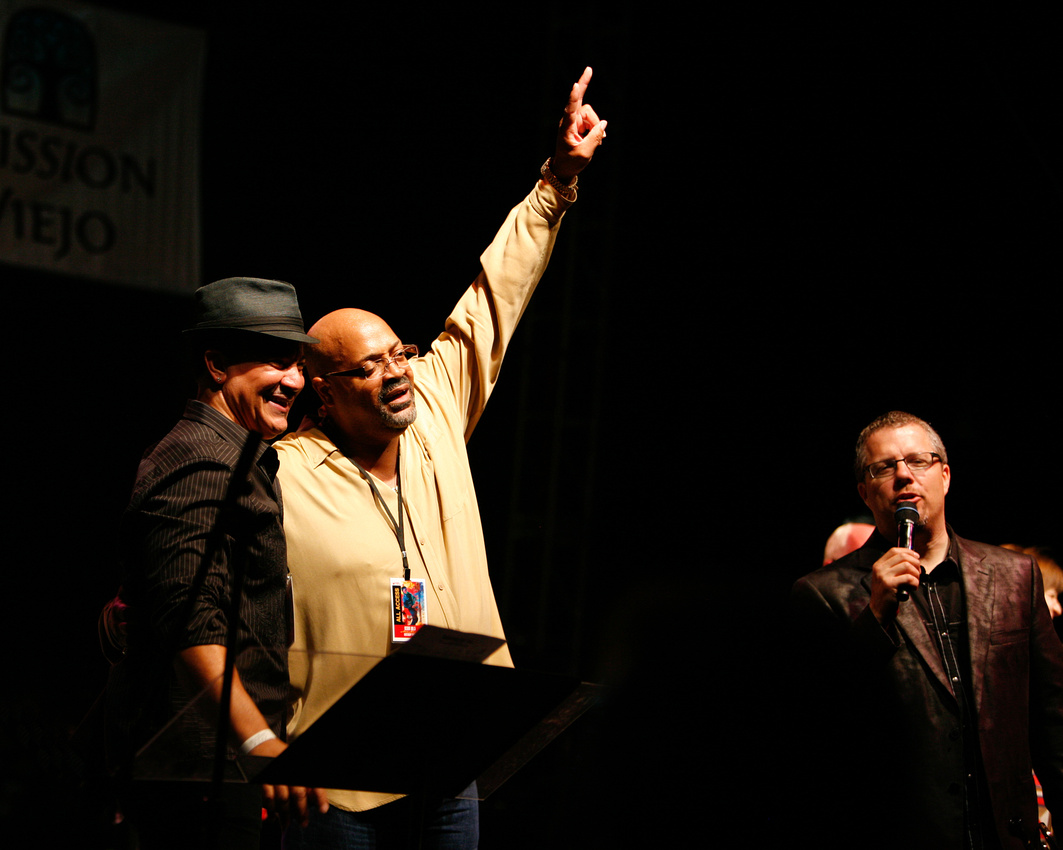 Lots of folks thought this might have been the best Bash ever.  I don't know about that, but I do know this; I had a most amazing day and am continually grateful for the access that KSBR and the City of Mission Viejo have given me to these fantastic and giving musicians who donate their time and talent to the Bash every year.  Can't wait 'til next year!