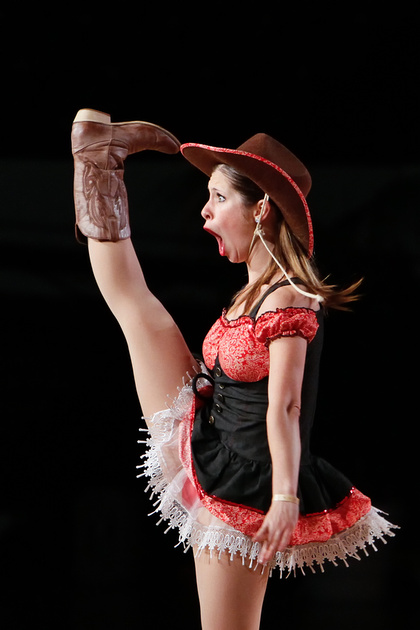 I shoot a lot of dance.  Studio shots, performances, locations, and competitions, you name it.  I've shot dozens of dance competitions over the years, ranging from ancient high school theaters to modern high school gyms.

Being designed for performances, the lighting in high school theaters is not generally bad, as long as the school continues to pay the light bill. Sometimes it's not up to par, but usually setting a tungsten white balance on a digital camera will give you a place to start and a fighting chance.   Then you have to contend with the dance competition banner in the back.  Some are relatively inoffensive while others are just plain garish.  But you can deal with it, as long as the company producing the competition allows photography in the first place, which is becoming less and less the norm.

But shooting high school competitions in gymnasiums is a whole 'nuther thing.  Even the most modern high school gymnasiums have lighting that cycles between magenta and green color casts.  Usually the naked eye doesn't pick up on this cycling, but a shutter speed that's fast enough to freeze the dancers' action will often pick up the color cast.  So a burst of three to seven frames will generally give you a magenta-cast exposure, a green-cast exposure, and sometimes a rainbow of magenta, green, and something approaching normal all in one frame.  Add to that the fact that the background behind the dancers in a high school gym usually consists of bleachers half-filled with assorted spectators who may or may not be paying attention, plus speakers, trash bins, dance bags, lunch bags, old bags, water bottles, and other dreck, and you have little hope of getting anything that approaches art, no matter how talented and beautiful the dancers are.

And then there's the Anaheim Convention Center, this weekend the home of the USA National Cheer and Dance competition.  The preliminary competitions are held either in a dimly lit hotel ballroom, complete with parquet flooring pieced together like every wedding reception you've ever been to, or in the hangar-size trade show hall in the Convention Center itself, which has been outfitted with the aforementioned bleachers, a basketball court (minus the hoops), and color-casting lights.

Then there are the two hired photogs who capture each and every dancer with eight (count 'em, eight) nuclear strobes mounted to the top of the bleachers.  (Even at a flash duration of 1/1500 second or faster, you're bound to get at least 10 of their flashes during the weekend.)  I don't envy these guys.  They probably see about 250 dance performances a day, with anywhere from four to over thirty dancers in each performance.  Trying to get something for each dancer is an exercise in futility.  They're good, but really all they can do is "spray and pray".  By the end of the day, I don't think they can see straight.

After qualifying in regional competitions weeks earlier and competing in the hotel or trade show hall on Friday, the dancers' first goal is to make it to the Finals, held on Saturday night in the Arena at the Convention Center.  For photographers, the goal is also to make it to the Finals, because that's where the Good Light is.  At this level, these dancers are incredibly talented and hard working.  They deserve to be seen performing their art in the best possible environment.  Here in the SoCal circuit, that's the Arena.  Directional without being harsh, and consistent across the entire performance space, the lighting in the Arena is more than you could hope for.  And the environment gives you the choice of photographing against a large clean backdrop with a boatload of trophies if you want that, or shooting into the void if you prefer that (which I do).

Photographing talented dancers in this environment is a dance shooter's dream. You can go for straight visual impact, as in the photo of Cole above, which is devoid of the normal distractions, and her expression and talent practically jump off the photo.  Cole is a beautiful dancer, with lines and an expression that are guaranteed to hold your interest.  In terms of impact on the judges, I'd be willing to bet that Cole is money.

Or you can tell a visual story, as in the picture of Ian and the Saugus dance team below. 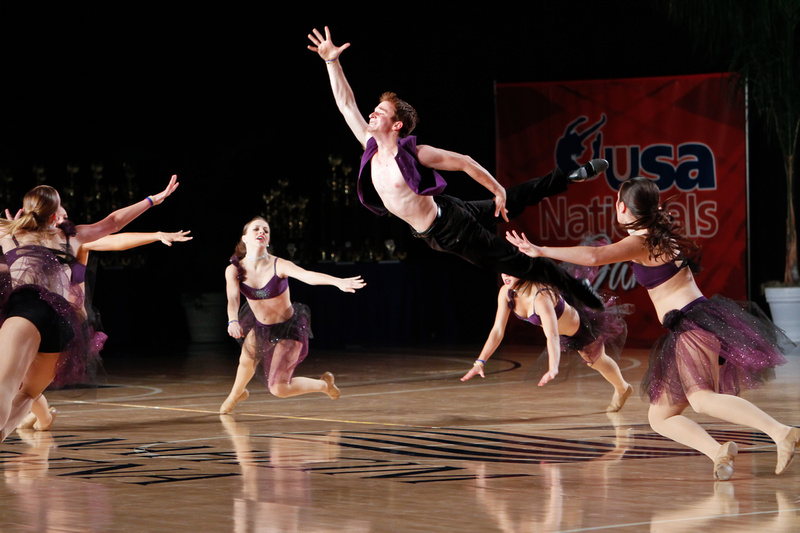 This competition marked the return of Ian Waschak to competitive dance after several weeks sidelined with injury.  This routine is one of several he competed over the weekend, and was undoubtedly one of the most challenging and impressive of all.  It's an incredibly demanding piece.  You can see the pain he's fighting through, and his teammates appear to be caught in it, too.  That's not the story of the choreography at all, but it's the truth of this image at this particular moment in time.  Ian completely nailed every move, leap, extension, and lift.  He literally "left it all on the dance floor", and at the conclusion of the piece, he needed help to get backstage.  I've never seen anything like it.