Into the Belly of the Beast, Lightly Armed 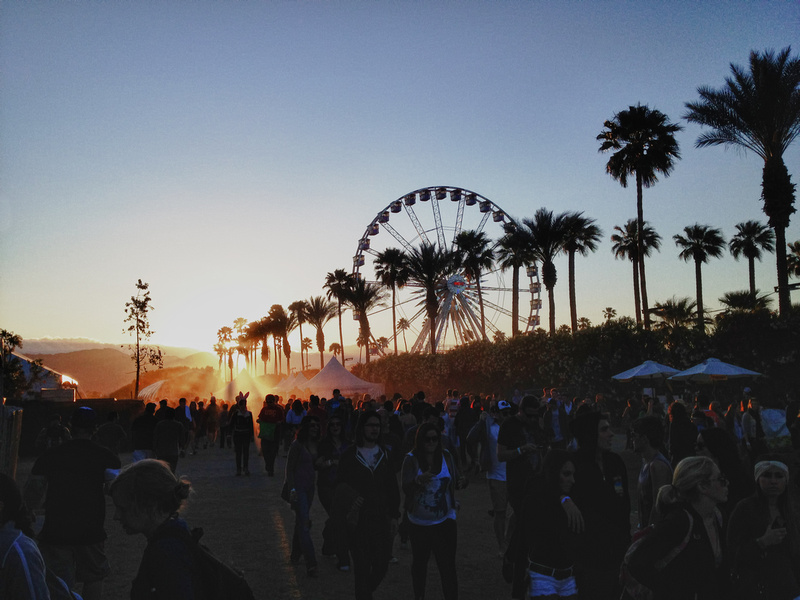 Last night, at about 2:30 a.m. my "best girl ever" daughter Katherine and I got back from the Coachella Music Festival, the annual alternative music fest in Indio, California, that draws kids from all over for three days and nights of ear-splitting, brainstem-wilting music and other fun activities.  Going to Coachella was the greatest thing Katherine could possibly imagine, but it took moving heaven and earth to convince her mom and me that she could go.  The solution, which was validated by several other random and dispassionate folks who offered their opinion on the matter, was that mom would by the tickets and I would also go. And while "alternative" music isn't exactly my cup of tea, I looked on it as an opportunity to test a couple of cameras that I could legally carry in with me, as the posted rules prohibited anything that looked like a professional camera on the premises.  So in I went, armed only with my trusty Leica D-Lux 5, and my new iPhone.

The D-Lux 5 is a nice camera for a point and shoot, outfitted as it is with a Leica Vario-Summicron lens that will go down to f/1.2.  It's feature-rich and very flexible.  What it isn't is rapidly responsive, which is exactly what you need in a target rich environment like a music festival, where interesting faces and images flash across your field of view and then rapidly vanish.  It also doesn't have the reach you need to see the action on the stage when you're about half a mile back. I desperately wanted the reach and the responsiveness of my Canon 7D fitted with the 70-200mm f/2.8.   (Heck, I coulda used 800mm for some of the acts.)  The iPhone cam is also much better than my previous DroidX; the sunset image above was captured with the iPhone, and managed through iPhoto, Nik Dfine 2.0 and HDR Efex Pro.  Not bad for a phone cam.

Ben Jonson's 1614 "Bartholomew Fair" is credited with the first use of the phrase "belly of the beast".  He asks, "What do you say to a drum, sir?  It is the broken belly of the beast, and the bellows there are his lungs, and these pipes are his throat, those feathers are of his tail, and thy rattles the gnashing of his teeth." 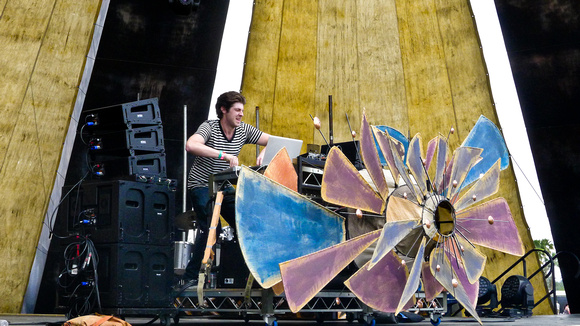 I can honestly say that for the first time in many years, I was left speechless, musically speaking.  Also hearing-less.  The beast that is Coachella was simply overwhelming.  My industrial grade earplugs disintegrated under the barrage.  The image to the left was made on the first afternoon, before the rains came, at a central location called the "Do Lab".  What they "do" at the "lab" is feature non-headliners who blast dubstep and similar riffs at Atlas rocket decibel levels.  Located at the center of the fairgrounds, the bass lines from the Do Lab carry across the entire festival grounds.  The only way the other acts can compete with this is to match them decibel for decibel, which they are more than happy to do.  Meanwhile, they hose down the crowd with pressure washers. 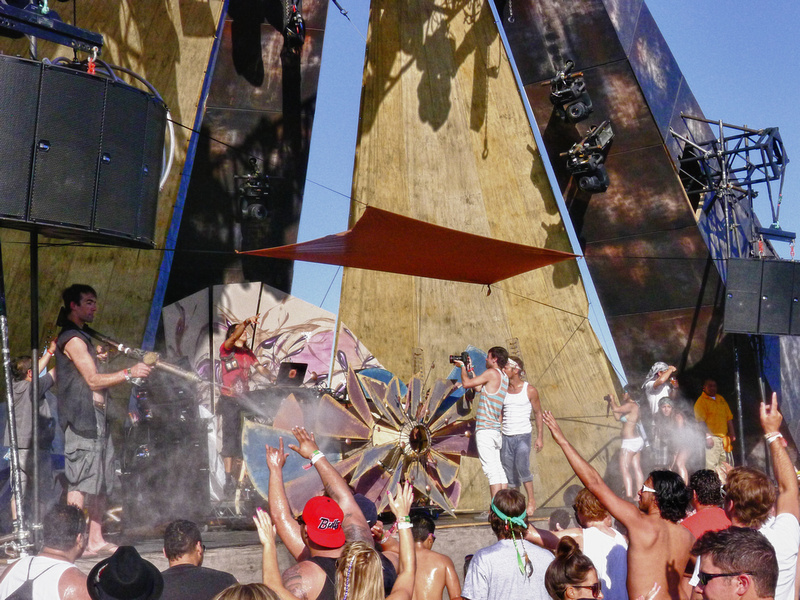 Having celebrated the 30th anniversary of my 30th birthday last week, I was pretty much at a loss when it came to identifying the dozens of performers on the three-day lineup.  Highest on my list of acts to see was the venerable reggae artist Jimmy Cliff, who performed on the main stage early Friday evening, just as the rains came.  I got to the main stage early enough to be relatively close (like maybe 100 feet away).  Unfortunately, the little Leica didn't quite have the reach I needed to get the performers in tight.  But fortunately, each of the five stages at Coachella has two large video screens on either side of the stage, and most people wind up watching a live performance on TV. 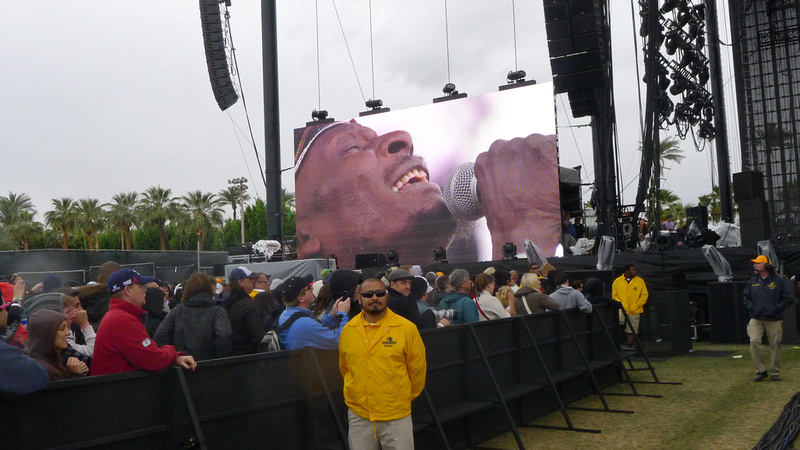 For me, the most poignant image of Friday was Jimmy singing "I can see clearly now, the rain is gone...it's gonna be a bright, bright, sunshiny day" while the rain soaked everyone.

I also wanted to see Florence and the Machine, who performed on the Outdoor Stage.  I got there in what I thought was plenty of time, but the stage was so far away, she might as well have been in Denver.

Some of the acts did surprise me, in a good way.  "St. Vincent" (aka Annie Clark) was news to me, but I enjoyed watching her high-energy performance. Standing off to the side of the tent in which she performed, I was able to capture one decent image of her performance, at -2EV. 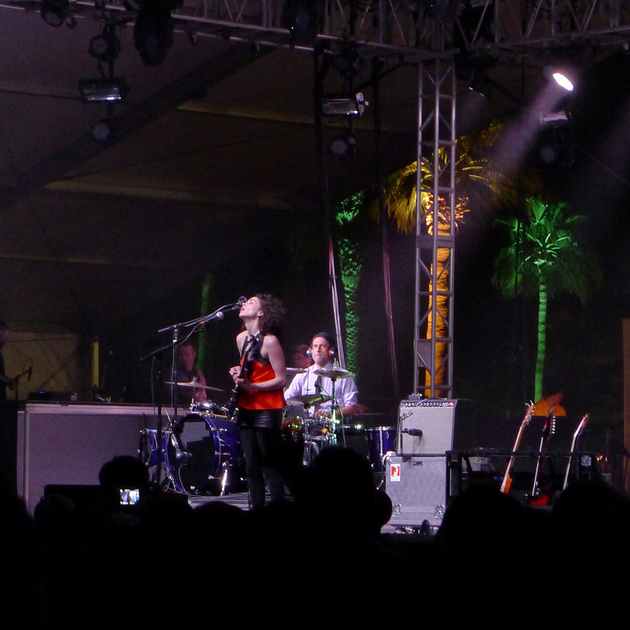 At one point, she decided to "crowd surf" as far as her microphone cord would reach.  The crowd went predictably nuts, but from my vantage point, all I could get was the image from the video screen taken from the stage as the security guys anxiously hoped nobody would drop her.  She never missed a beat. 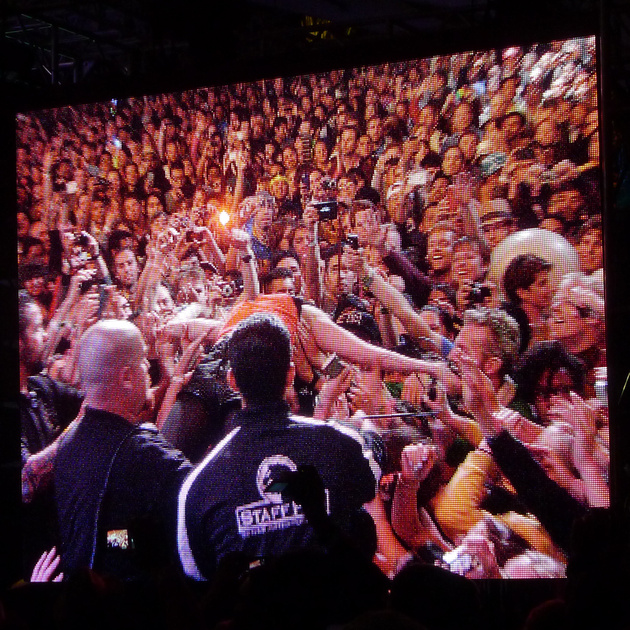 The main reason Katherine wanted to go to Coachella was to see some of her favorite "dance music" artists, including Alesso, Avicii, Calvin Harris, and Afrojack.  There were others, too, but at my advanced age, I can't force myself to remember them.  Here's the deal: the tent fills up with amped up kids, the "artist" gets up on a high perch with his turntable/mixing board/whatever he has, and pumps his fists for about an hour or more, while a light show flashes and the same incessant bass beat pounds into your brainpan til it has the consistency of naval jelly. 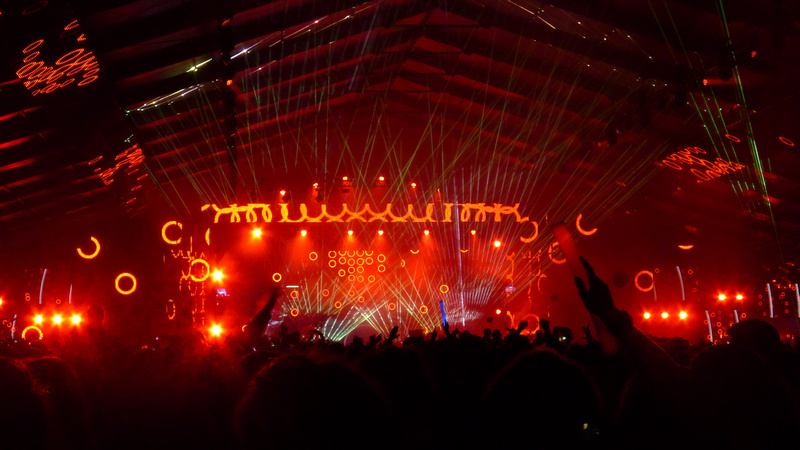 Katherine and I re-enacted the age-old parent/child debate:  Me: "How can you listen to that shit?  It all sounds exactly the same!  You're gonna go deaf!  I already am!!"  Her: "Daddy, this is the best day of my life!!"

At the end of the three days, we were both exhausted.  I drove back home while Katherine slept in the car.  She needed to get up for school this morning.  While driving back, I riffed on the oft-seen commercial:  Coachella tickets - $700; hotel and meals - $300; bonding with your daughter - priceless. 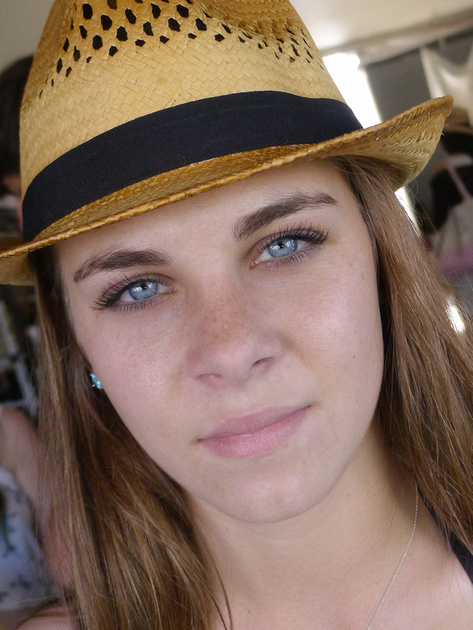