For about a year now, I've been looking forward to the possibility of meeting and maybe even doing something with Jordan Matter.  If you don't know who he is, Google "Dancers Among Us", which is Jordan's nation-wide journey discovering and photographing amazing dancers doing amazing things in places you wouldn't expect to find dancers.  The end product of this project is a book to be published by Workman Publishing and released later this year.

I became aware of Jordan by a roundabout process starting with Joe McNally and David Cooper, both of whom photograph dancers better than I ever will, and whose work inspires me to improve.  I often tell people that there are two kinds of photographers, technicians and artists.  Technicians can craft a usable frame out of any circumstance, but artists truly create the circumstance they bring to the image, whether by choreographing it or just seeing it in a different way.  I'm a pretty decent technician, but I aspire to flex the artistic side of my limited mental faculties.  That was apparent in my first print review with Joe McNally in Las Vegas a few years ago, when he challenged me to get out and choreograph a story with dancers, to take charge of the entire process, and not simply record what's happening in front of me.  And that, photographically, is exactly what "Dancers Among Us" is about.  It's about a lot more than that, but that's a story for Jordan to tell.

So I contacted Jordan several months ago, after photographing a beautiful young dancer I know, Caitlin, at the Walt Disney Concert Hall.  I sent it to Jordan and offered to help him with support and dancers if he ever came to Southern California.  A few weeks ago he responded and accepted my offer of assistance.  I spent a couple of days scouting locations and offered to bring two incredible dancers (Caitlin and Lauren)  that I knew would be able to do the kinds of things Jordan would want.  I can't show you any of their images because they may be used in the upcoming book, so they've been "embargoed".  But I spent the first two days of this week supporting Jordan and the dozen or so dancers who volunteered for his tour of LA.

The image above shows how this thing goes.  It's Jordan shooting Terry Beeman in front of a cheap hotel for those who can afford it along LA's Skid Row.  Jordan asked me to stay just across the street with the engine running while he worked this scene with Terry.  We had driven around the neighborhood while Jordan looked for specific locations and created a mental story to place this dancer in the scene.  I shot behind the scenes images for him and suggested locations, perspectives, and other occasional things that a photographer "in the moment" might not otherwise see.

During my two days with Jordan, we hit about ten locations, working from noon to late at night, with eleven different dancers of all types.  (We only got kicked out of four, which is pretty much par for the course.)  He got some great frames.  While at the Walt Disney Concert Hall, he was gracious enough to make a few of me. 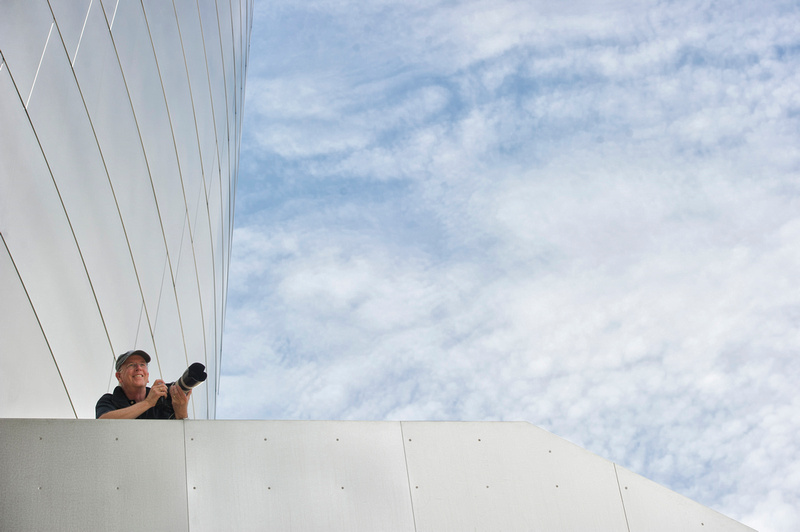 This has been an incredible experience for me, and one that I'll cherish and use as an inspiration for my future dance projects.  Jordan's a great guy. Look him up online now, and be on the lookout for the book when it's released this Fall.

Next up: three days of shooting Middle School theater and two days of high school dancers in National competition.