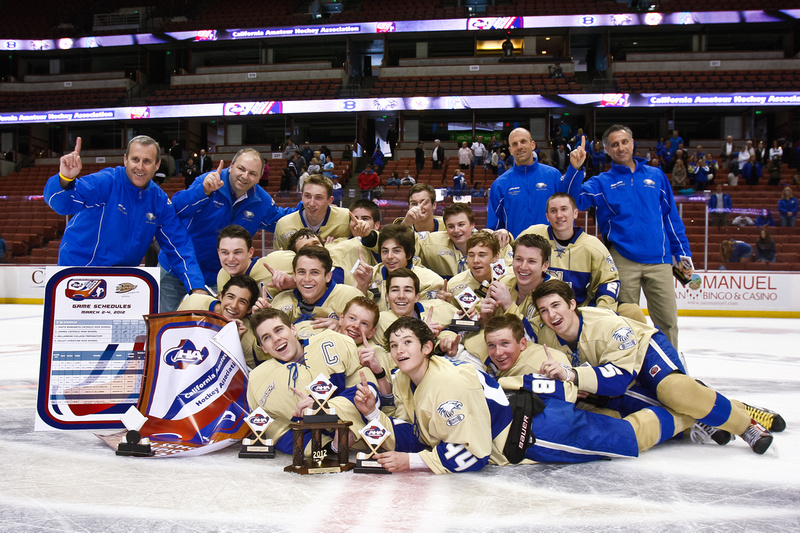 I had the great good fortune to photograph the Santa Margarita Catholic High School Eagles as they marched through the inaugural California Amateur Hockey Association High School Championship tournament this past weekend.  The tournament pitted the two best SoCal teams against the two best teams from up north.  The final game pitted the Eagles against the a very good team from Bellarmine Prep in San Jose.  These same two schools fought for the CIF Division 1 football crown last fall, with the Eagles emerging victorious in a nail-biter.  This one was exciting for an entirely different set of reasons, and the Eagles dominated with a final score of 4-1.

High School hockey is a growing sport in California, but as of now, it's not under the California Interscholastic Federation.  Instead, the leagues are organized and supported by the Anaheim Ducks and San Jose Sharks, which is a great thing for these NHL teams to do.  Teams in the Ducks' league play at the Anaheim Ice facility, where the tournament was held, until Sunday evening, when the championship game was played at the Honda Center, home of the Ducks.

This is primarily a photography blog, but first, I need to tell you just how good this Eagle hockey team is.  To say that they outscored their opponents by a combined score of 21-3 is not enough to adequately describe this team.  The Eagles went undefeated in league play, and their principal goalie, Connor O'Brien, had a perfect Goals Against percentage.  That's right...unscored upon.  I've seen them six times this season, and every time I come away with greater respect for their skills, their discipline, and their ability to focus and just win.  That comes from great coaching by Craig Johnson and his staff.

Though I'm not principally a sports photographer, I do know that hockey is one of the most difficult team sports to shoot (and my shots prove it).  Fortunately for me, photographing in the Anaheim Ice facility was about as easy as hockey shooting can be.  Perched on steps just above the glass provided a perfect opportunity to get the wide view while anticipating where the action is developing.

Transitioning to the Honda Center and photographing through the photographers' holes in the glass proved to be a different, and totally intimidating matter. 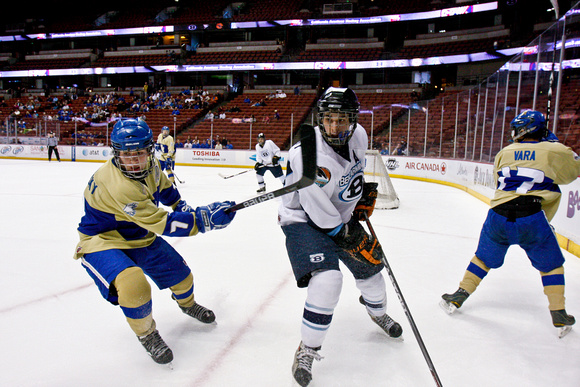 First, the lighting is as good as you could expect; I was getting 1/500 at f/4 with ISO set at 2500, not quite enough to freeze a fast moving stick or puck traveling across the frame, but better than most low-light stuff I normally do.  And shooting right in front of the action, at the players' level, gives you the opportunity to get shots like this.  Using a wide angle lens at 16mm, there's just enough distortion to give the shot even more drama than you experience when these guys slam into the glass right in front of you.  Of course, it can also work against you, as my view of the Eagles' first goal was completely blocked by an up-close and personal view of the backside of the referee's pants, if you catch my drift.

The real difficulty in shooting through the holes in the glass is trying to capture everything.  Shooting hockey in this environment is like being in the middle of a tornado, with bodies, sticks, and the puck flying from every direction.  Because hockey is so fast-moving, I found myself switching rapidly from one camera to the other, one fitted with the 70-200 lens and the other with the 16-35.  This had the unfortunate consequence of banging my equipment around quite a bit, which induced some inadvertent changes in my exposure settings.  But worse is the location of the hole relative to my height.  There was just no way to get comfortable and stable at this height; too high to sit, too low to kneel.  If I had a longer lens (say, 300mm), I could simply press the lens up against the glass itself, rather than shoot through the hole, and be assured that any imperfections or scratches in the glass would not affect the shot.  But lugging around 300 mm of glass in a fast-moving scene has it's own limitations and is not something I want to do, though my respect for those who do it certainly grew after last night's experience.

In the end, I was pretty pleased with my results from the tournament.  I have the utmost respect for the Eagle hockey team and enjoy the company of its parents and supporters.  I've learned a lot about shooting this sport, and I have some images that, while not exactly Sports Illustrated quality, I can take some measure of pride. 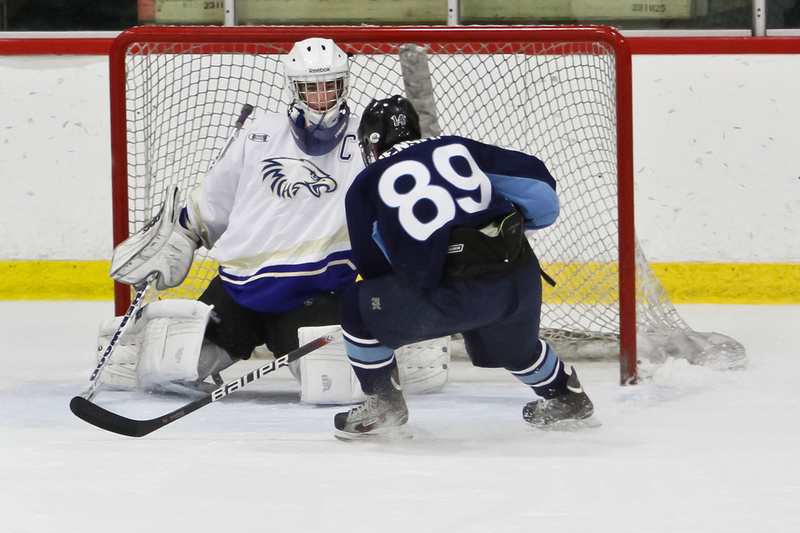 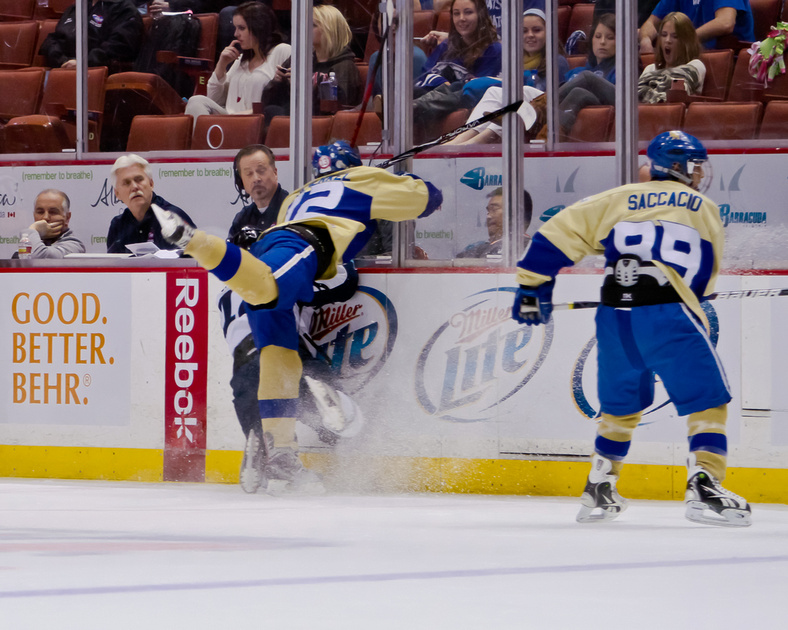 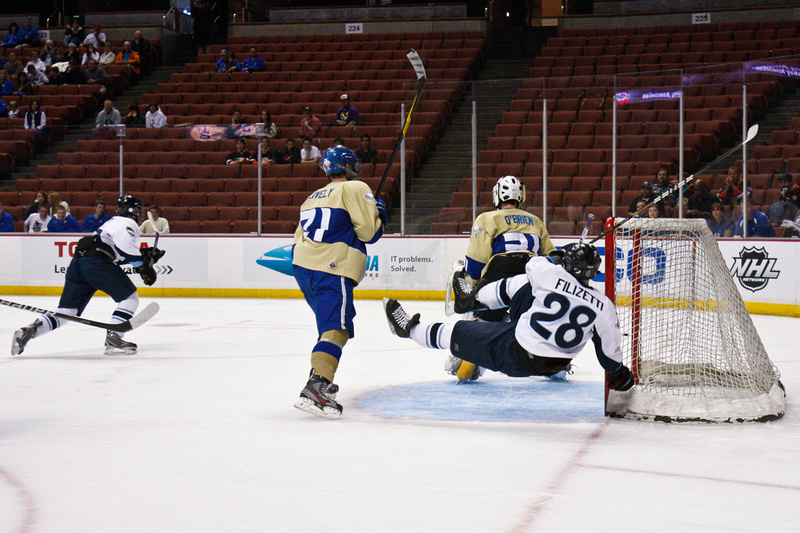 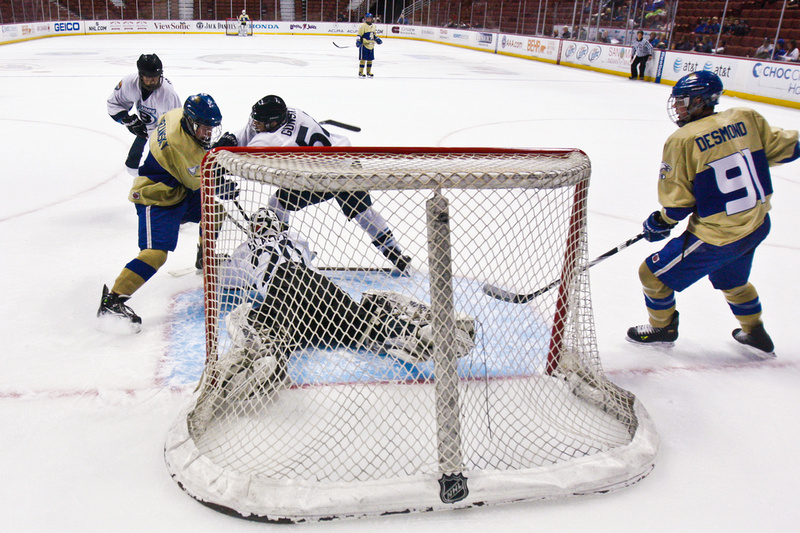 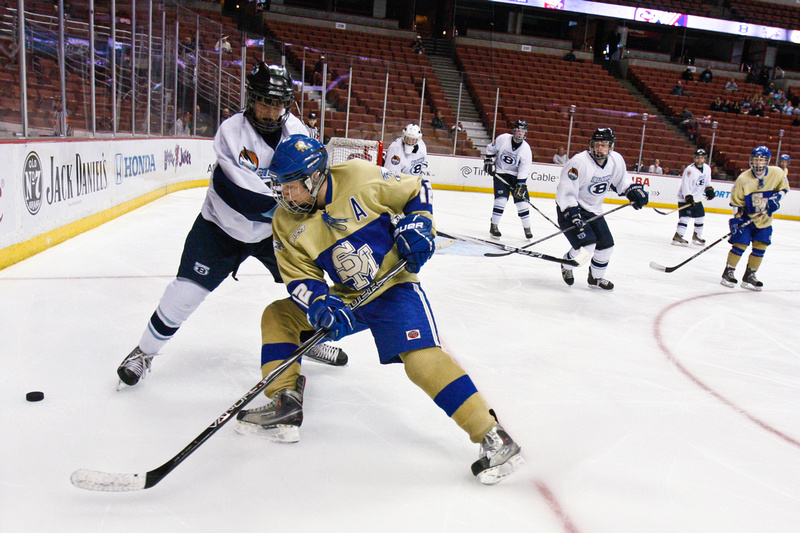 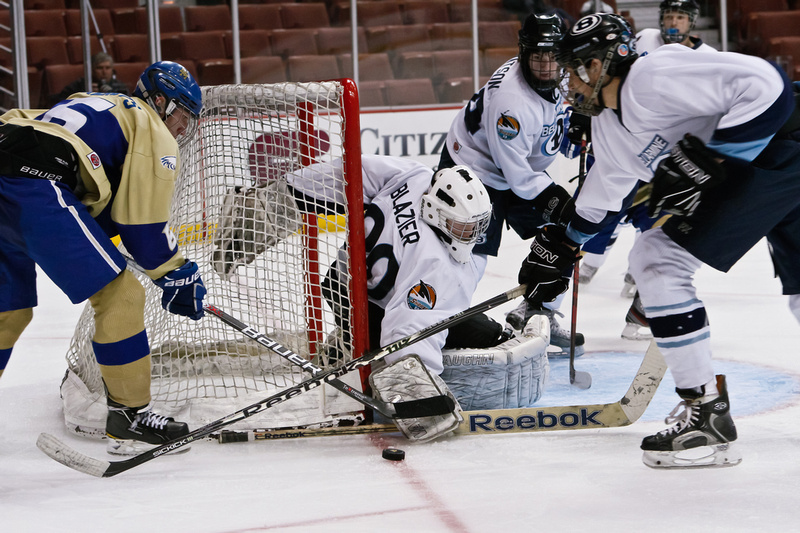 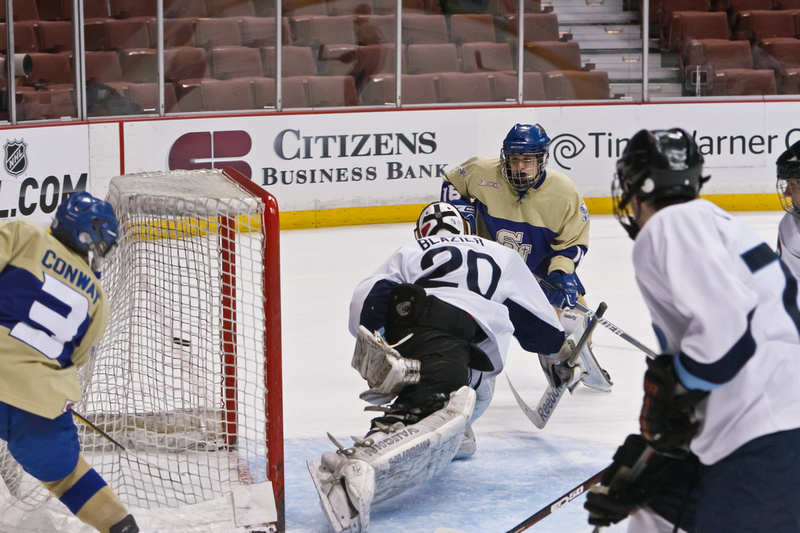 Thanks to Barbara Abbott for inviting me to this party, and to Dave Black, who has taught me everything I know about shooting sports.  My skill level is about 1% of his.