Getting My Butt Kicked 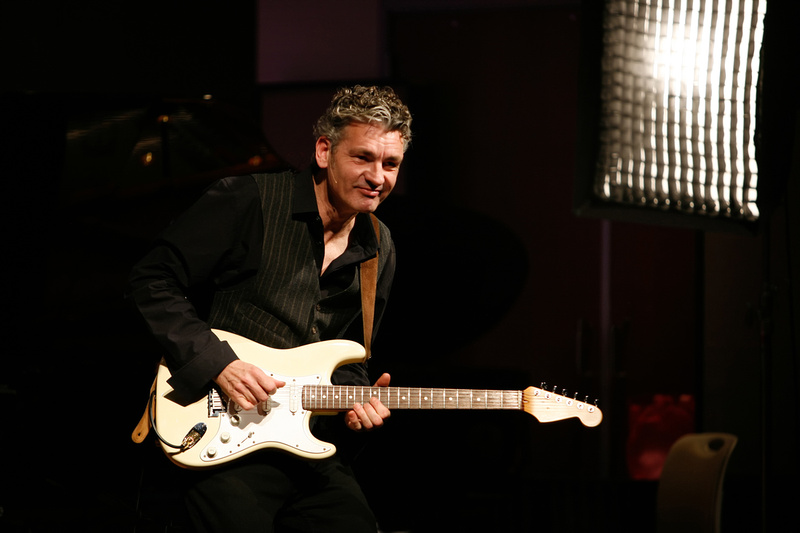 On Saturday, I had the opportunity to photograph another live broadcast of the KSBR's Gary and Kelly Show from the Norman P. Murray Center in Mission Viejo.  This is a great community resource, with outstanding guest artists from the smooth jazz world.  This week the broadcast featured guitarist Chris Standring, who treated the guests to a wonderful performance.

I usually get good results from these performances, because the stage is lit for television.  The sides of the set are lit by hotlights, and the backdrop of the set is lit from behind through a curtain, which usually poses some challenges, but on this day, the background was much brighter than usual, and I couldn't get anything to work.  It affected my exposure, my white balance, my focus, and maybe even my stock portfolio.  I couldn't exactly stop the performance and hold my trusty light meter under Chris' chin, and I didn't want to completely blow out the background beyond recognition.

So what do you do when faced with a circumstance like this?  There's a saying that goes something like, "You can't change the wind, but you can change your sails."  First of all, you can change your own position to take the problem out of the frame.  I moved to the far sides of the room, to isolate Chris from the difficult backdrop.  I like this strategy, and use it all the time, even when the frontal view is working well.  Shooting into the wings is the best way to isolate a stage-lit performer.  Spot metering on the face will give you the proper exposure, and since  the face is lit by these stage lights, the void in the background will almost always go black.  Any remaining items in the frame can be left in for context or can be cloned out if they're too distracting.  In the photograph above, taken from the left, I intentionally included the Chimera softbox with the egg-crate grid, which channels the light and reduces scatter.  You can see its effect on Chris' face.  The fact that Chris' black shirt and dark vest blend into the background shows what the egg-crate does.  The light that doesn't hit Chris' face travels right behind him in a straight path, leaving the wings behind him unlit. The shadow side of Chris' face is lit by the stage lights, which would normally be the key lights.

For the next image, I moved to the right, and shot into the opposite wing.  Chris was at center stage, lit by the overhead stage lights.  The foliage behind Chris picked up some illumination from another Chimera light aimed at the interview set just out of frame to the right.

Finally, if you can't avoid the problem by moving your vantage point, and no amount of Photoshop can bring the right balance of color, contrast, and exposure to your image, the last option before hitting the Delete button is to go black and white, and pretend you intended to do this all along.... 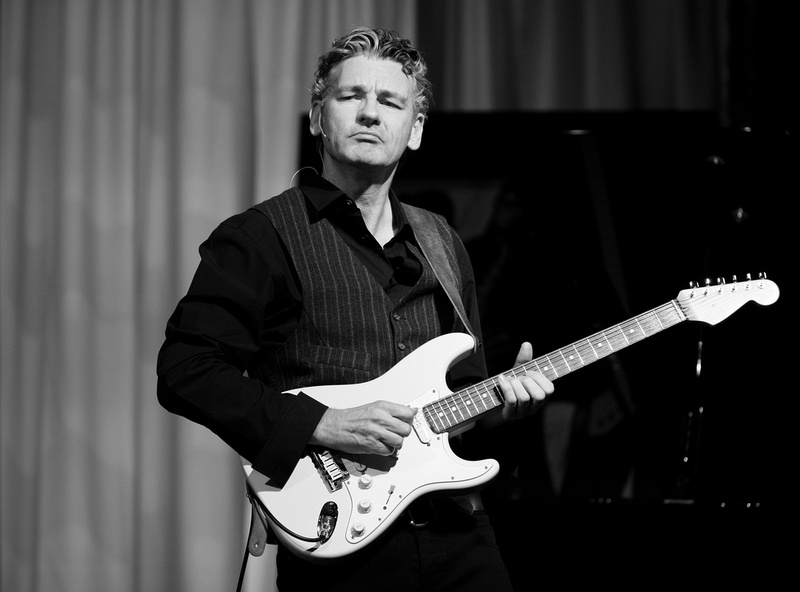 That's it for today.