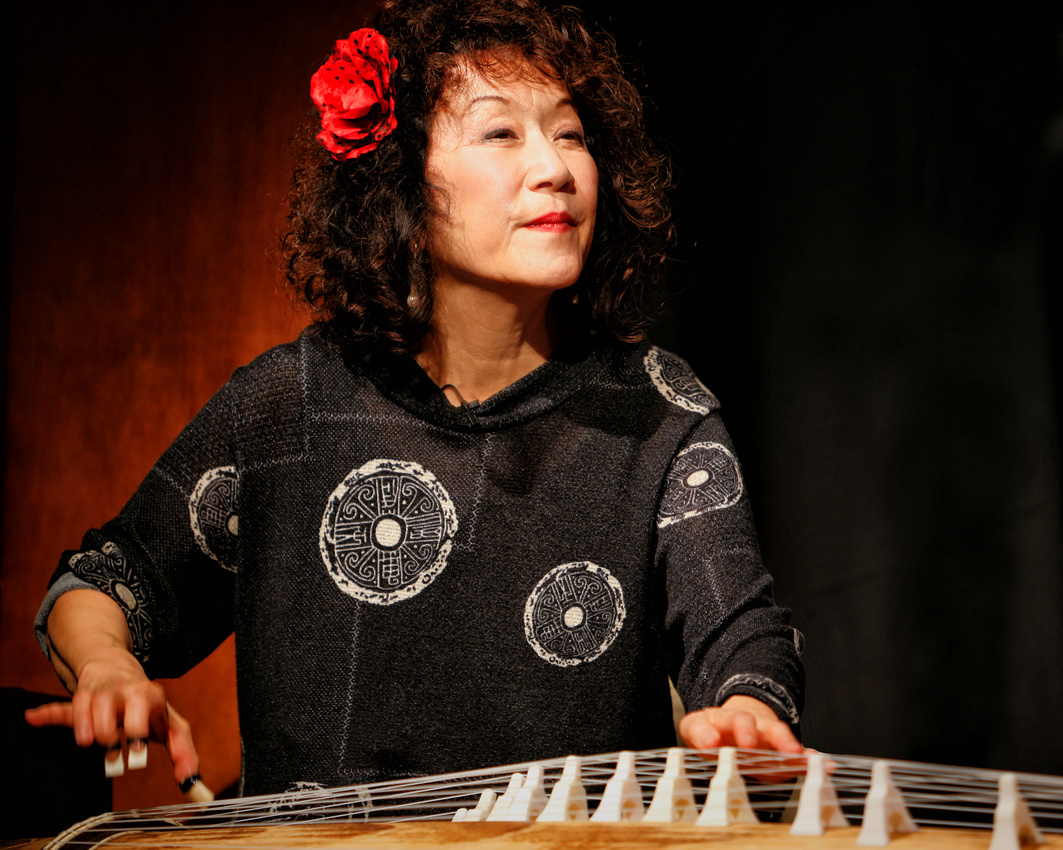 Anyone who knows anything about the west coast jazz scene knows the band Hiroshima.  Their unique sound, sometimes known as "World Urban", is grounded in the virtuoso work of kotoist June Kuramoto and her husband Dan Kuramoto on woodwinds. Tonight, along with keyboardist Kimo Cornwell and bassist Dean Cortez, the quartet performed for a VIP crowd at the Norman P. Murray Center in Mission Viejo in a kickoff event for this year's annual KSBR Birthday Bash on May 27.  The event was a live radio broadcast of the Blake Aaron Radio Show on KSBR, and Blake sat in with Hiroshima on a couple of numbers.

It was a great night of jazz, interviews, food and  beverages.  It was also a great night for photography, as the room was lit for television by our local Mission Viejo station MVTV under the leadership of Eric Winter. Getting portraits such as this one is technically easy under these conditions; find your exposure and fire away.  (In this case, it's ISO 400, 1/125 at f/2.8.)  The trick, however, is to find the expression in the artist that conveys a sense of who they are and how they work their craft.  To me, this portrait of June speaks of serenity, pride and confidence.  In reality, she's working the koto in perfect synchronicity with Dan on the flute.  The  other compelling aspect to this image is the framing element provided by the curtain behind June.

KSBR, the public radio station at Saddleback College in Mission Viejo, has a very productive partnership with the City of Mission Viejo, and the result is incredible access to some of the best jazz artists in the country.  Frequent live radio broadcasts such as this one provide up-close and personal access to these amazing artists, all of whom are warm and wonderful people who love to perform.  The crowning event of the year is KSBR's annual Birthday Bash, the station's premier fundraiser for the year, in which dozens of jazz artists donate their time and talent on behalf of KSBR, and deliver some of the best live music in Southern California.  For me, it's hands down the best musical and photographic day of the year.  This year's Bash is Sunday, May 27, at Oso Viejo Community Park in Mission Viejo.  If you like great music, well produced in a great environment, you should be there.