Another great morning with the Gary and Kelly Show at the Norman P. Murray Center in Mission Viejo.  The guest artist today was Michael Lington, who gave a customarily great performance.

I've described the approach to shooting artists in this venue already, shooting into the wings to create a dark void behind the performer.  The details for this shot are ISO 400, 1/250 at f/2.8, pretty standard settings for this kind of shot.  White balance was set to Auto in camera, then cooled slightly in Camera Raw to render skin tones better. 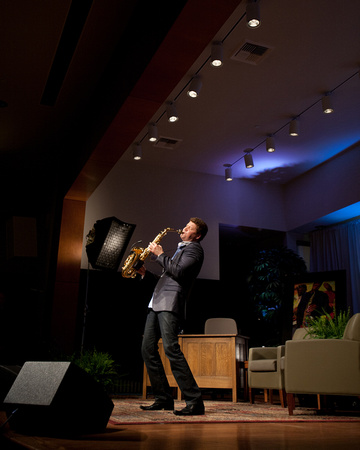 I thought I'd try something a little different this time, though.  During Michael's last number, I got down low in front of the stage, off to the right, to see what a low and wide view would deliver.  I like the leading lines and framing elements that the ceiling lights provide.  This shot is 16 mm, but cropped to a 4x5 format.  With the crop, I lost some of the lights, but also much of the large void in the ceiling.  The Gary and Kelly Show not only features performances by the guest artists; they interview the guests as well, hence the desk and chairs.  For this shot, I would have preferred the chairs to be filled, but to give Michael the undivided spotlight, Gary and Kelly left the set during his performances.

Michael has performed in the annual KSBR Birthday Bash in the past.  The 2012 Bash is coming up in about three weeks, and I can't wait.  I first photographed Michael at the 2009 Bash.  It was one of my favorite images of this annual celebration of KSBR and smooth jazz.  He stepped out in front of the stage lights, such that the majority of the frontal lights washed over and behind him, leaving him in soft, feathered light.  I captured a number of frames in both horizontal and vertical positions while he was there, and converted my favorite one to black and white.  I presented a print of this image to Michael this morning; he was gracious and appreciative, and told me he would frame it and hang it in his studio.  That's a real honor for me.  Here's the image from 2009.