I usually like to open my blog posts with an image, hopefully a somewhat interesting image.  But this one needs a little setup.

One of the lessons we learn as photographers is the need to "work the scene".  It means looking at all of the visual elements and photographic possibilities inherent in a given location, with an eye toward composition.  It's most frequently employed in landscape and architectural photography, where the scene doesn't change, but the position of the photographer and camera angle can change in relation to the scene.  It's also used in portraiture, so the subject can be placed in a way that minimizes background distractions and renders the subject in a more compelling way.  Most folks aren't typically aware of this process; they look at an interesting landscape and fire away without knowledge of how the eye moves through (and hopefully stays within) a photograph.  Or they focus on the face of the person being photographed, and fail to notice the tree seemingly growing out of the person's head.

I've posted quite a few photographs here that were made at various live performances during broadcasts of KSBR's Gary and Kelly Show at the Norman P. Murray Center in Mission Viejo.  These broadcasts are great fun for those who attend them, and they give me wonderful access to incredibly talented performers.  I've also commented on the benefit of repositioning myself during a performance to get a more interesting background.  But today I want to take this concept a little farther, not only in terms of working the camera angles, but also exploring the performer in greater detail.

This opportunity comes by way of the realization that at this particular venue, with the audiences' chairs set up the way they are, and video crews located where they are, there are only about five unobstructed camera angles available to the photographer: center rear at eye level, stage left (high or low), and stage right (high or low).  So the more I shoot there, the more challenging it is to get fresh, compelling images that differ from those previously made.

Such was the challenge I faced last Saturday when sax virtuoso Euge Groove performed hits from his recent release "House of Groove".  The morning of the performance was bright and sunny, rendering the window behind the stage (although covered by a drape and some light) completely unusable as a background.  Sometimes, if the weather is cloudy, this can be overcome, but today, no way.  Here was the starting point: 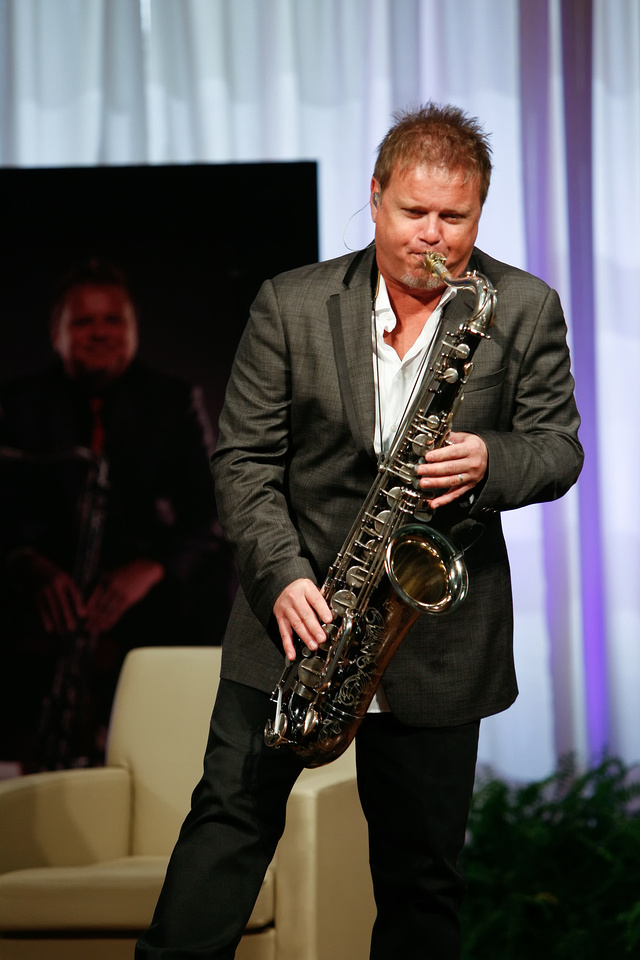 So we move to the side, try to minimize the window as much as possible, and hope to get a good look at Euge talking with host Gary Bergeson, and place him in relation to his publicity picture on the stage.  We get a nice expression that shows what kind of guy Euge is, but that window is just killing the shot: 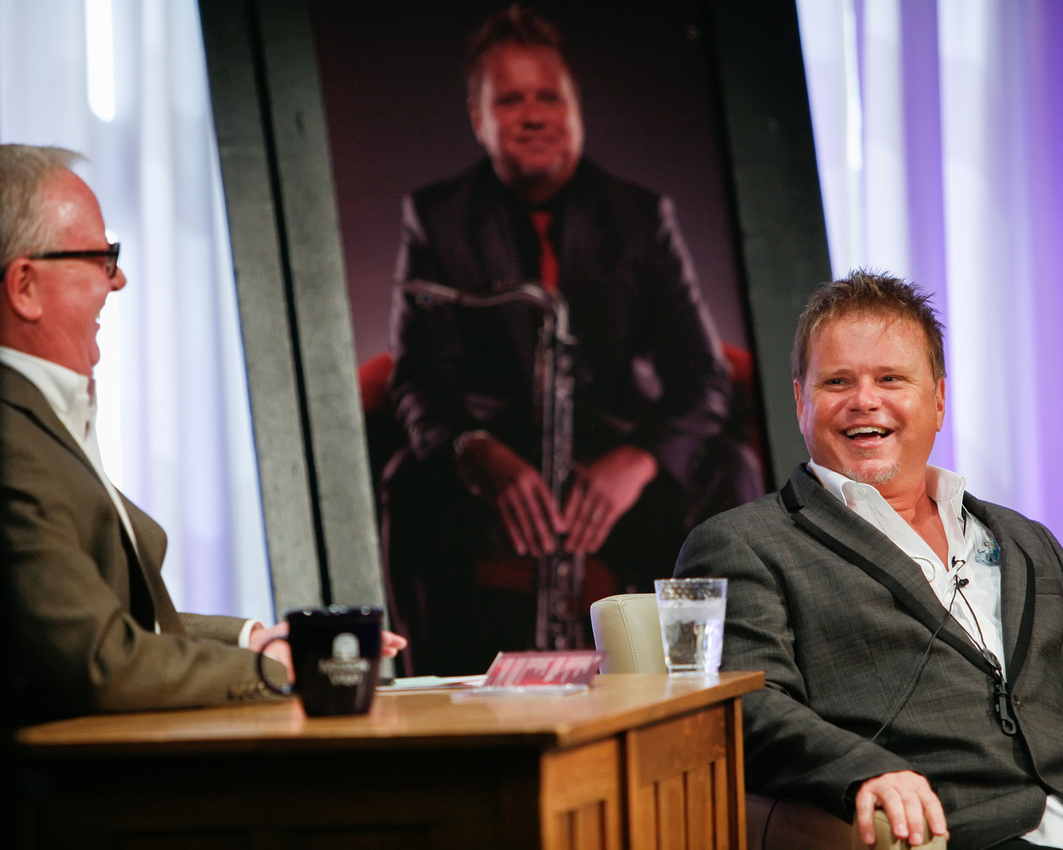 Okay, gotta get rid of the window altogether.  So we move to the tightest view from stage left and wait for him to step forward during his set: 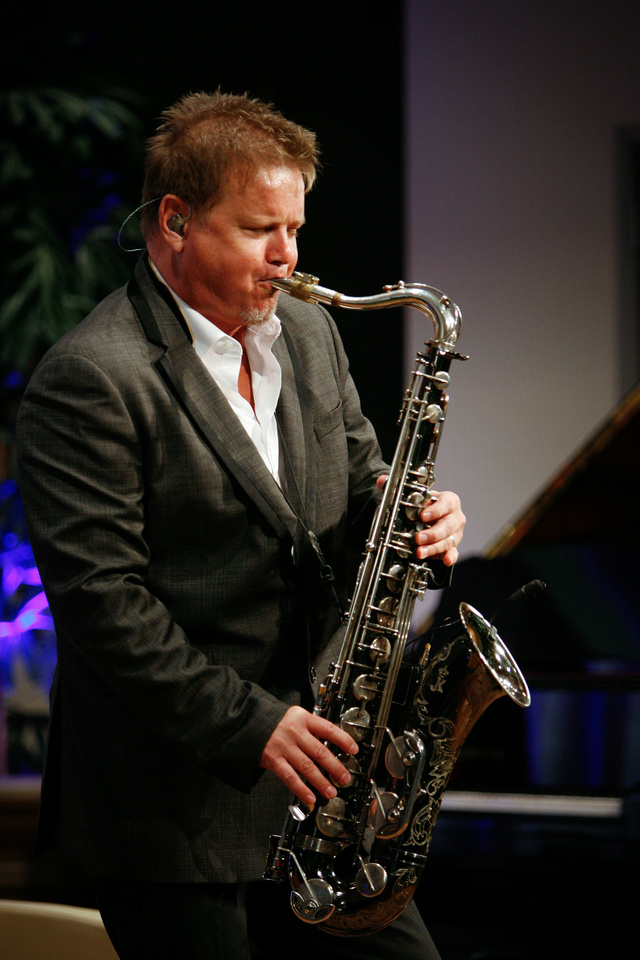 Nice shot, but one I've taken a hundred times from this same vantage point.  I like the light from this angle; it's short lighting that provides a nice loop lighting pattern on the face.  But we need to do something more.  Maybe a tighter composition with a little more expression from Euge.  He's working hard, and with the hot lights, he's starting to get red in the face and sweat: 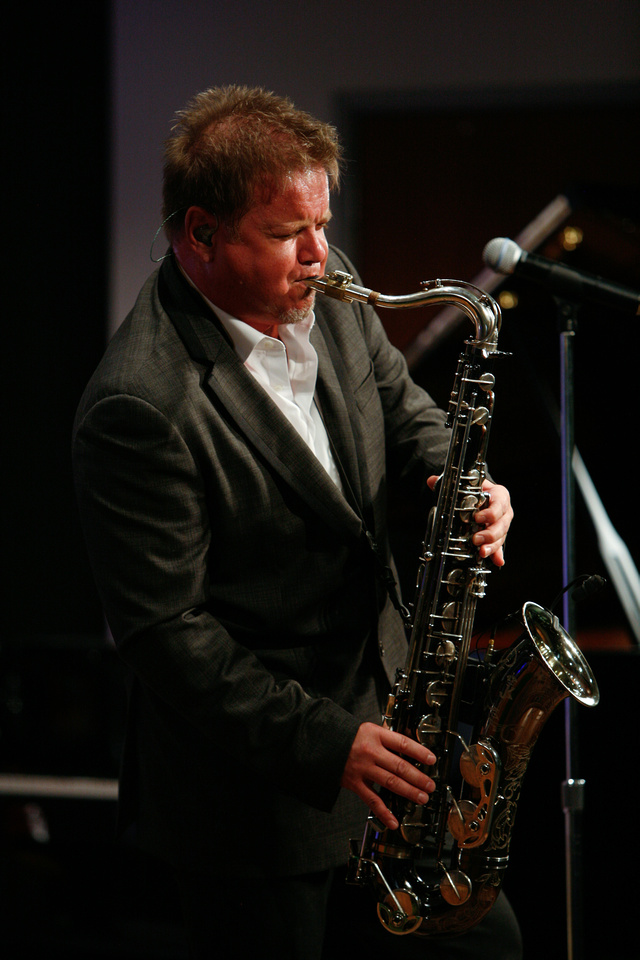 Not bad, but not that different, either.  So what can we do now?  What about a totally non-sax-playing portrait of Euge enjoying the applause from the audience after performing one of his hits?  This one requires careful observation of the performer and precise timing to capture a look of inner satisfaction, rather than simply a reaction to the fans themselves. 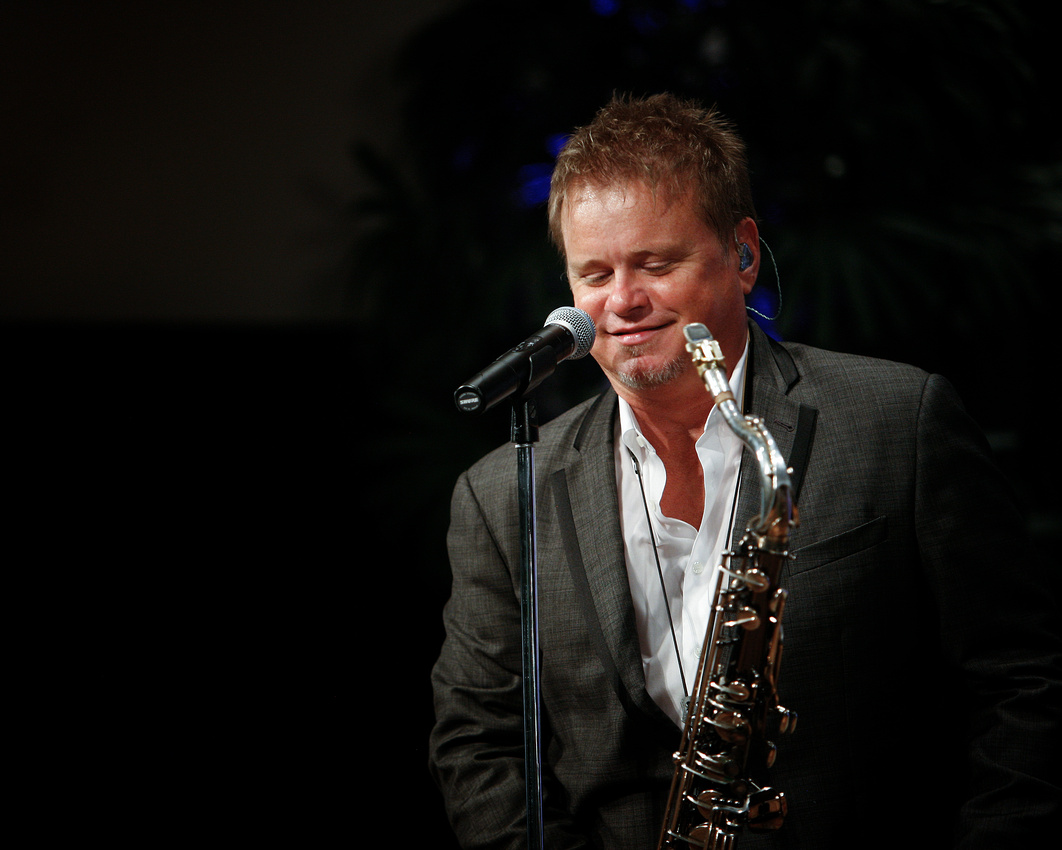 And finally, what can I do to create a different kind of look from all of the others that I've captured at these wonderful performances?  How about a darker portrait, softer but with deeper contrast, out of the specific context of this venue?  I think the application of different treatments specific to each performer is the direction I want to explore more as I continue to work this particular scene. 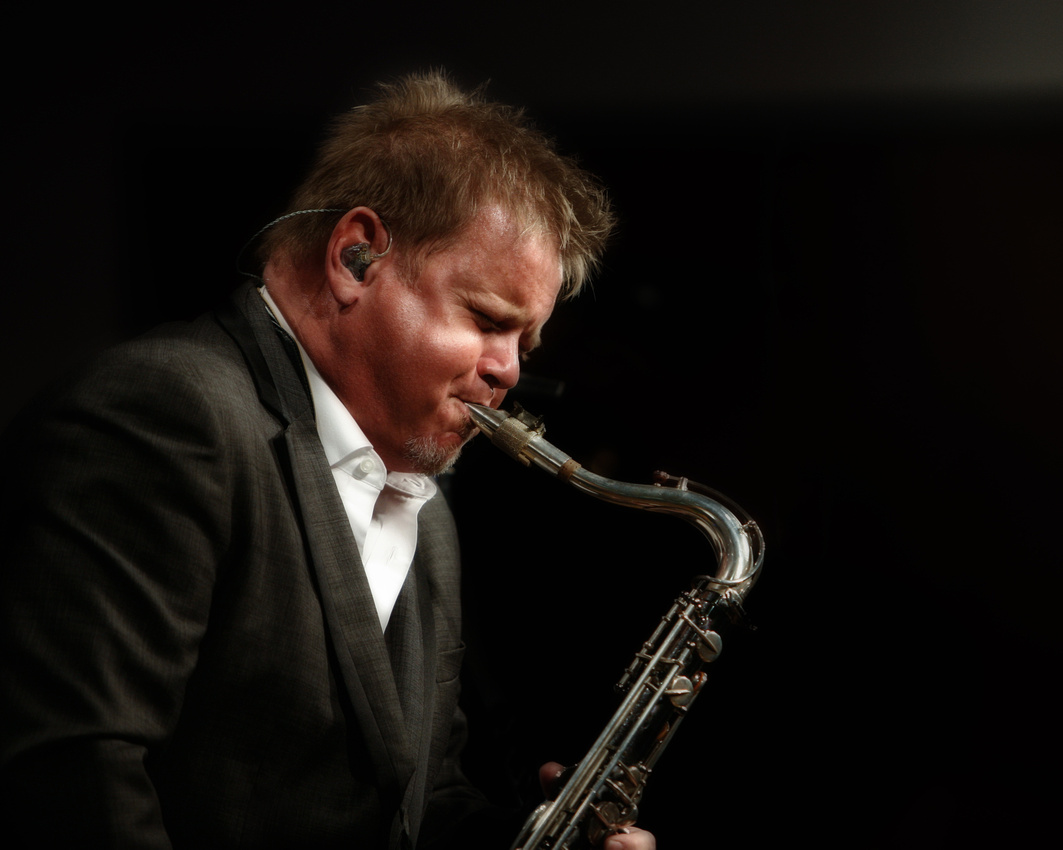 Next up with Gary and Kelly:  Brian Culbertson on December 8. I'm pretty sure I'll be using different, grittier techniques for him.  I can't wait!