Things are Gonna Get Real Busy

I haven't posted anything on the blog since March, as things around here have been pretty hectic, including several quick turnaround jobs for Santa Margarita Catholic High School and a wonderful choir trip to Spain with a great group from Tesoro High School.  Well, things are going to get a lot busier during the month of June, with 14 days of shooting, including five days of dance portraits, seven days of recital rehearsals and performances, plus two nights of choral performance work.  The dance and recital shoots will each require about three days of non-stop culling and editing, plus print order fulfillment.  By my math, that means 29 days of full-tilt project work, a few hours after which I hop a red-eye to Europe to join the Monte Vista High School (Danville, CA) choir on a performance tour to London, Paris, Florence and Rome, with performances in Notre Dame, St. Peter's Basilica, and the Sistine Chapel.

So I'm taking a few minutes to post some images from yesterday's dance portrait shoot at Pacific Ballet Conservatory, the first of two weekend shoots there.  I brought a new, very large Studio Dynamics backdrop, which I unrolled for the first time at the dance studio.  It's so big (12' x 30') I have no room at home to even look at it.  Why so big?  I want the ability to move the subject far enough away from the back of the backdrop to enable me to control the light on the subjects independently of the backdrop.  I did that to some extent on Sunday, and I like the way it turns out.  But there are other reasons for picking the photos I've selected to show here.

Sometimes a costume makes a huge difference in how a dancer looks.  This is Carol, who has great technique and a real stage presence about her.  But this brilliant blue dress flows with an elegance that accentuates Carol's technique, and provides a dimension to the photograph that other costumes might not. 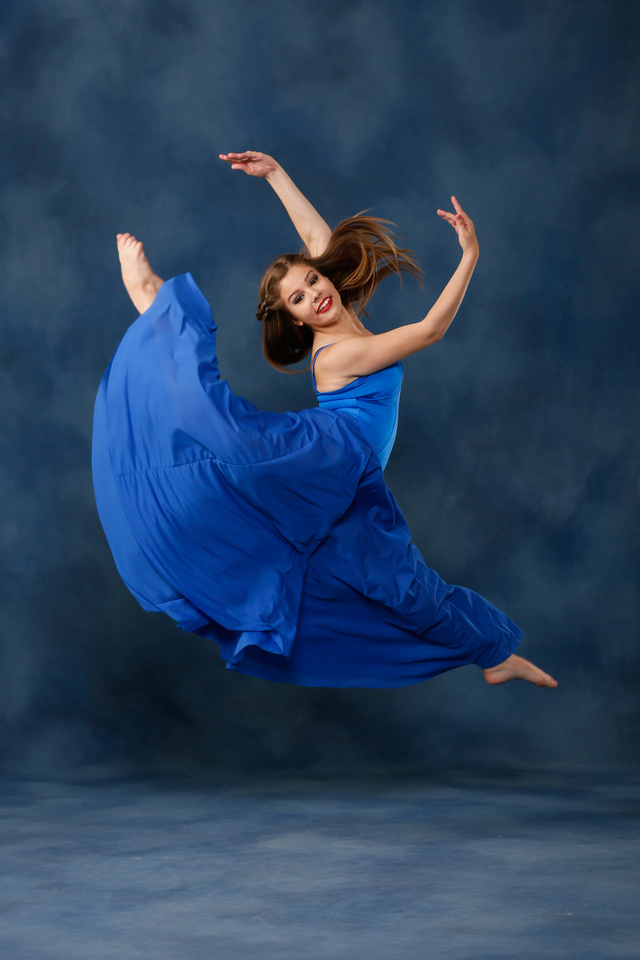 The same is true with the photo below of Kendra, whose form and technique are augmented by the same blue dress. 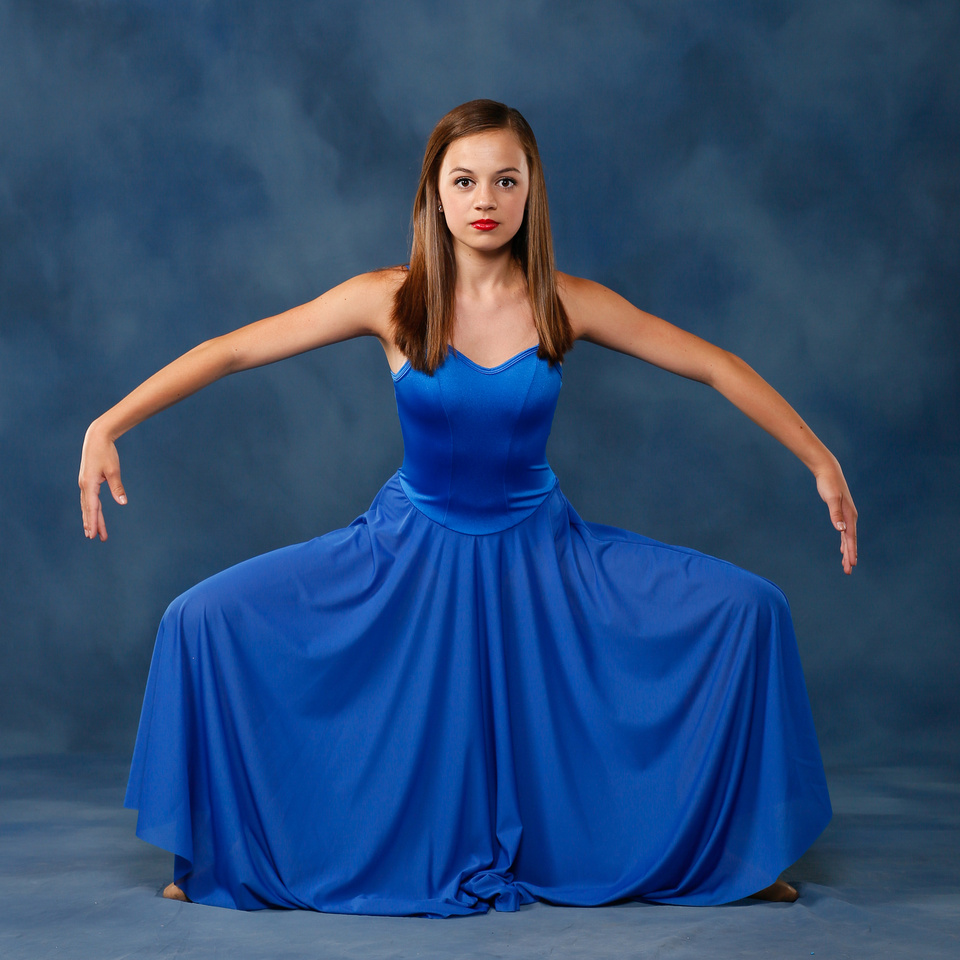 My lighting approach for weekend-long dance studio shoots has to be broad and flexible, because I need to be able to shoot individual dancers ranging from very young, inexperienced children to accomplished and technically proficient older dancers.  I also need to shoot groups as large as 20+ dancers, followed immediately by individuals, with no time to change the lighting grid.  So one way I can adapt to rapidly changing subjects is to design the grid to selectively use the lights.  The change that makes the most immediate difference is to either kill or drastically reduce the fill light, which is placed on axis with the camera and is used to provide lighting for the backdrop and to open up shadows on the opposite side of the key light.  Then, by placing the dancer either in or just behind the spread of the key light, I can get some dynamic images primarily lit with the back rim lights placed at a 45-degree angle behind the dancers.  You can't light a five year-old with this, but a proficient dancer certainly benefits from this approach.  Here is Amanda, lit by the feathered rear edge of the key light, plus the rims: 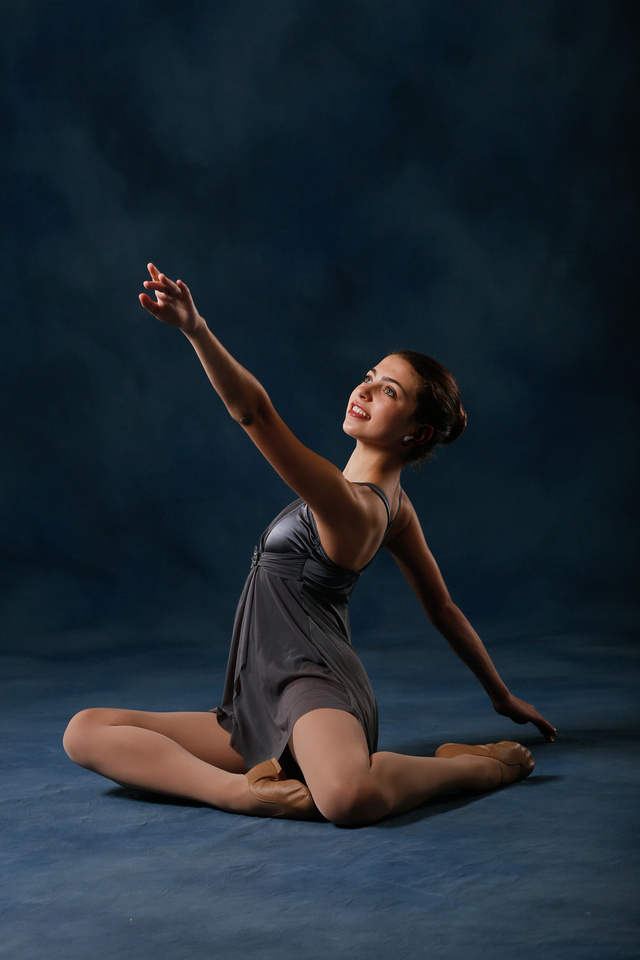 And here's Jenny, lit similarly. The feathered edge of the key light, combined with the right rear rim defines her jaw and neckline. 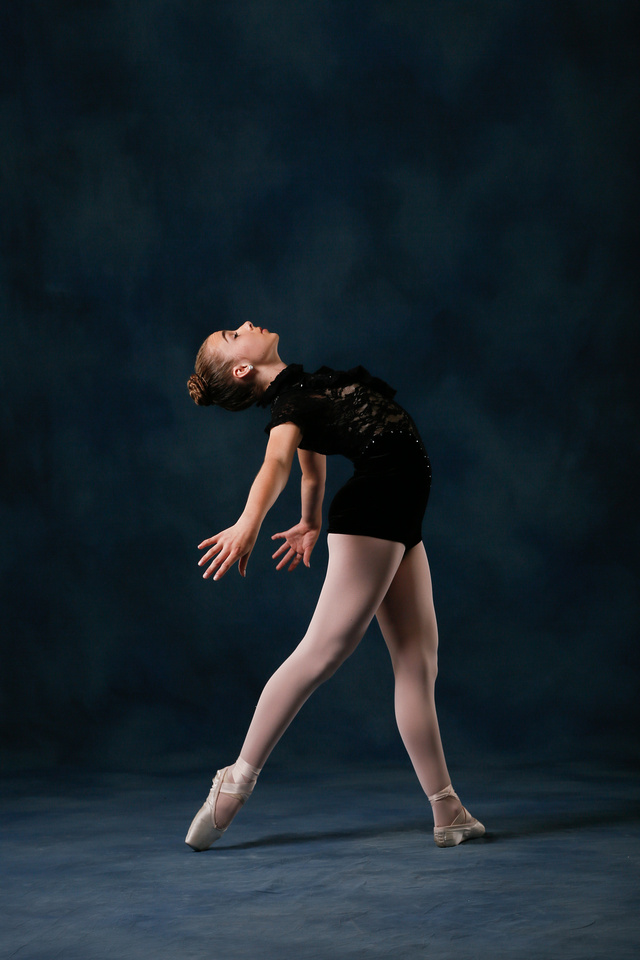 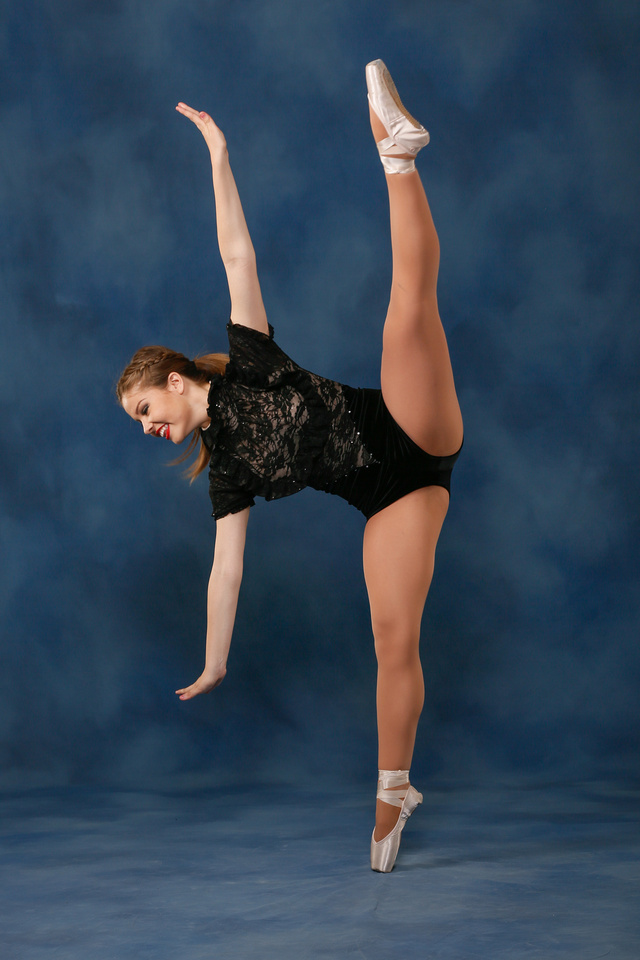 I also really like it when a young dancer who is new to me takes the set and just kills it.  This is Makenzie, and this is her first frame in front of my camera. 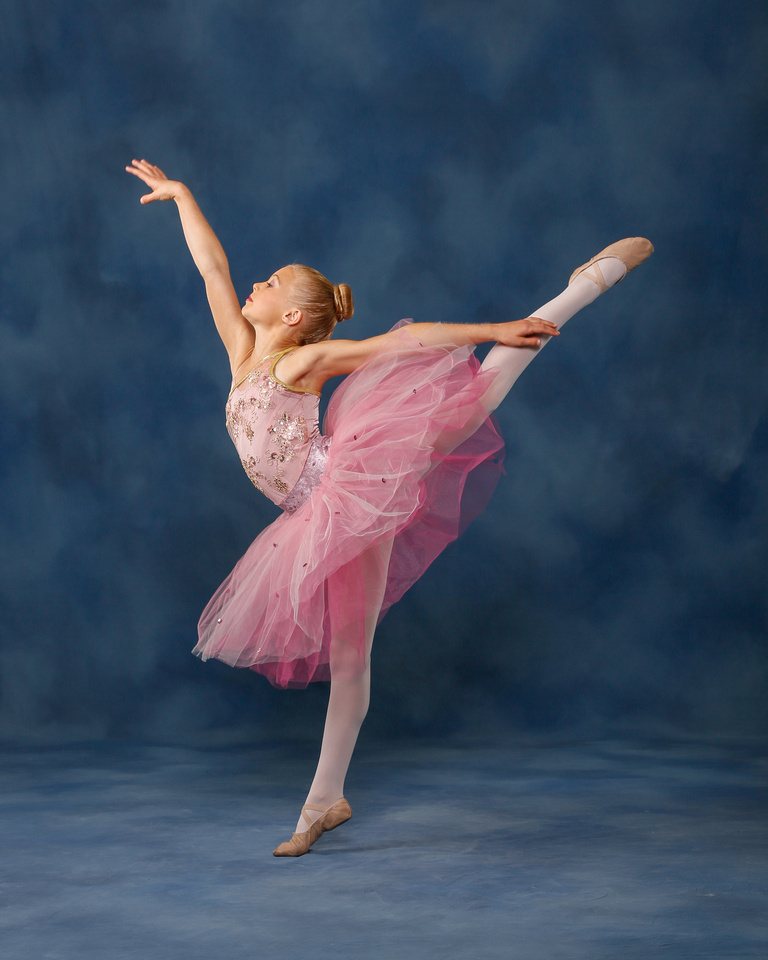 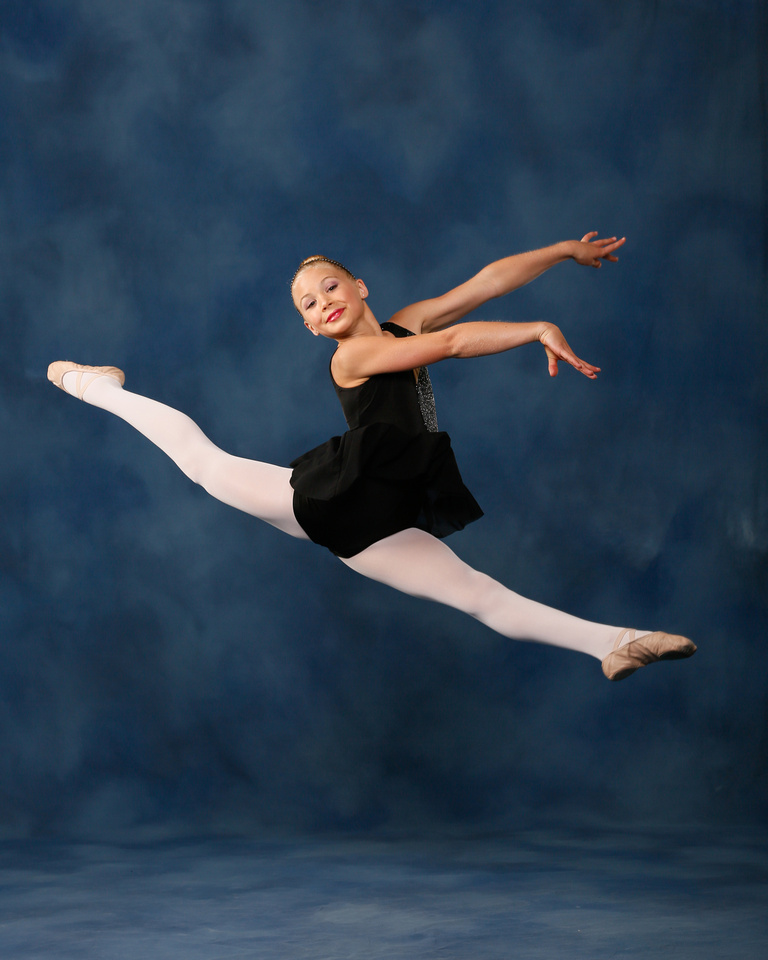 On a long day, things can get a bit routine, shuttling in dancer after dancer.  So sometimes I look for other opportunities to make a picture with some impact, something out of the ordinary, something not designed to be "perfect" dance form.  Often it's of younger dancers.  Here's Rachel, trying to decide which pose she'd like to do next. 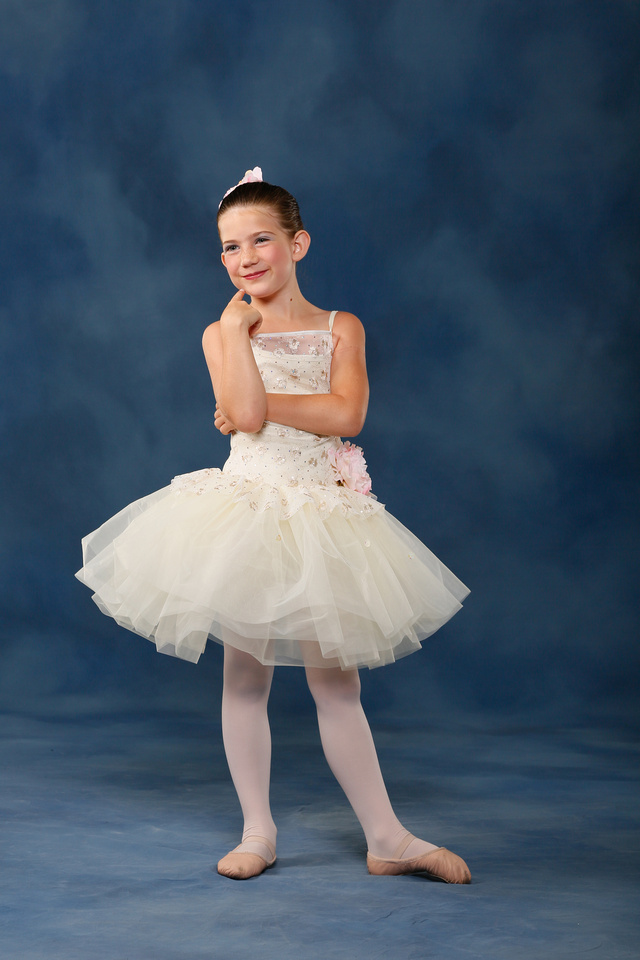 This is totally candid, and not to take anything away from Rachel's dancing ability, this was her best picture of the day.  Everything from her facial expression to the curve of her foot tell a story.  There is always a place in the family archive for images like these.

Sometimes you create these looks.  This is absolutely posed, but with no technique to worry about, it's a lot more natural, especially for a youngster like Ivey. 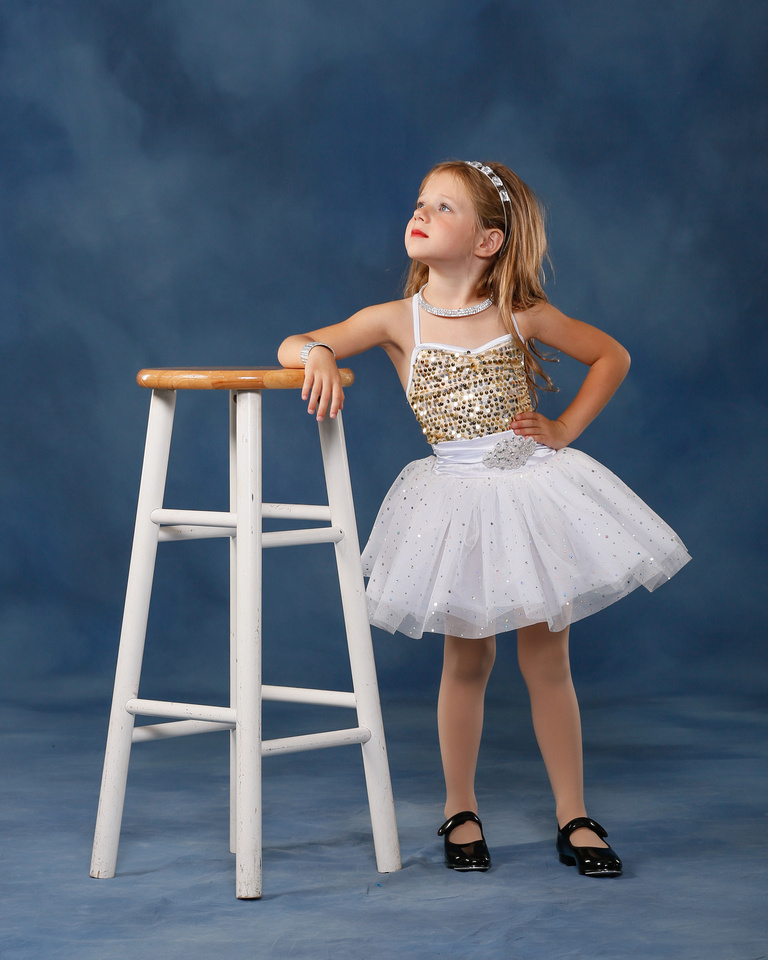 This is what you do late in the day when you, the photographer, try to decide what pose to try next….

Finally, here's Mackenzie, tying up her pointe shoes.  This shot has been made thousands of times with variations by just about every dance photographer. So I finally jumped in that pool.  She had no idea I snapped this one off, but she liked it a lot and wanted it in black and white. 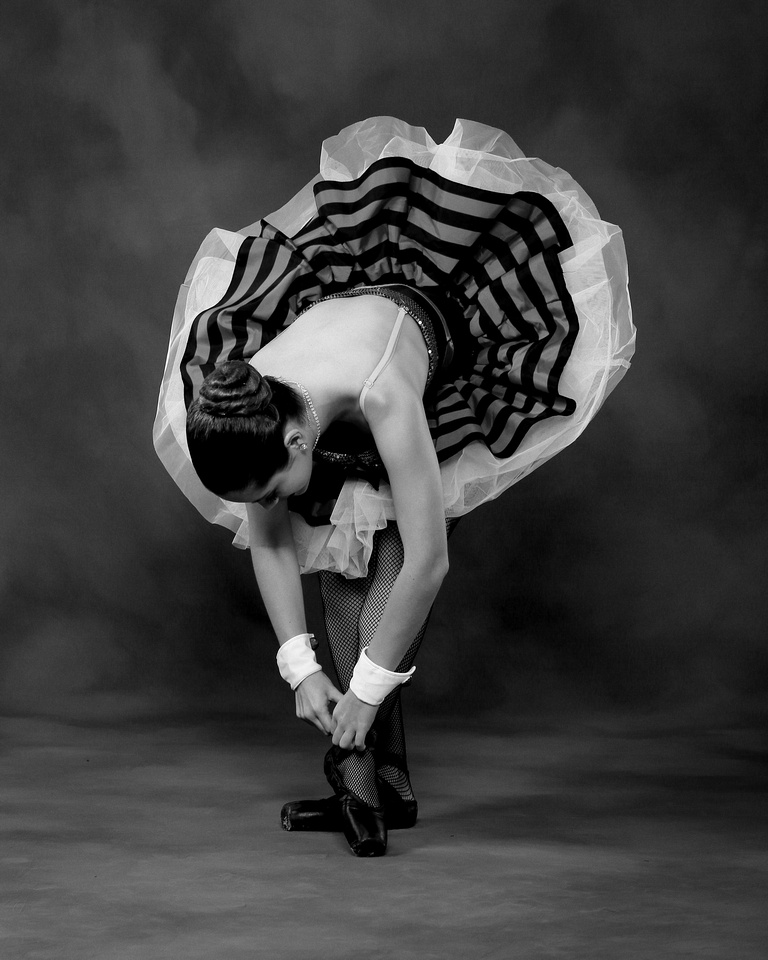 So, back now to culling, editing, order fulfillment, and the wheel goes around and around.  That's June for me.  Back after Europe.