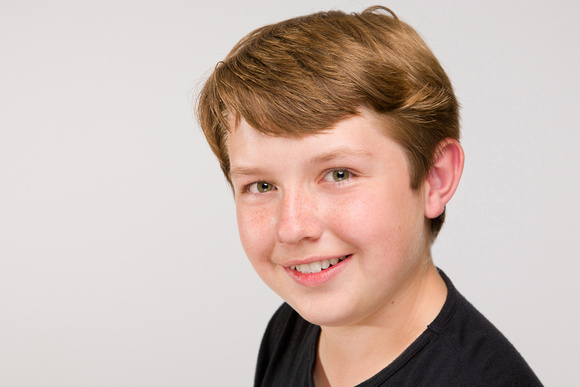 This past week, I began the photography portion of St. John's Episcopal School's production of "Beauty and the Beast".  As I noted in my previous blog post, my work begins with headshots of the cast members, moving on to rehearsals and then to the actual performances in late March.  Here's a sample of one of the headshots.

I'm getting away from vertical headshots in favor of horizontal compositions for two reasons.  First, the negative space gives me room to add the actor's name in the photograph.  But more importantly, it gives the subject some "room to breathe", rather than being hemmed in.  My choice of where to place the face in the frame is guided by basic facial analysis, looking for each person's "good side".  With some kids, like John here, it doesn't really matter.   The name will be placed one third up from the bottom of the frame.

Lighting for these headshots is staightforward:  a Qflash mounted in a Kacey beauty dish with a diffusion sock and a silver reflector to provide fill in a clamshell configuration.  The white backdrop is lit with two speedlites at 1/4 power and placed to render it light grey.